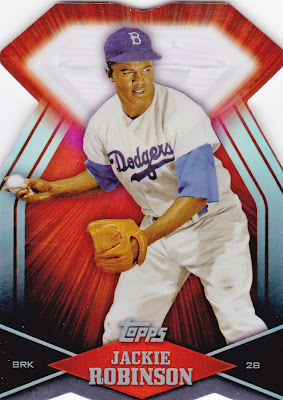 This week has been unbelievably hectic in the most unexpected ways. From illness, to new computers at work, to a scheduling nightmare that I anticipate lasting at least six weeks, I have been able to dedicate zero time to collecting.

All of the posts that have appeared here in the last week have been created under duress. I can't believe I never typed out "I have no time for this" in the middle of one of my sentences, because it has been all that I have been thinking as my fingers tap-tapped the keyboard.

As I was rushing inside this afternoon from scrambling to pick up my daughter from school (realizing I was 20 minutes late in doing so), trying to fend off the starved-for-attention dog, and knowing I had to tend to three other things in 10 minutes before I split for work, I threw three card packages -- and another package that contained an actual POSTER -- onto the table for later viewing.

But one caught my eye and I opened it to show here today. The others, sadly, will have to get in line behind the nine other packages I need to show (I can feel an epic trade post breathing down my neck).

The package that jumped to the front of the line is from everyone's favorite card company, Topps.

It was my Diamond Giveaway package, containing my Diamond Diecut Jackie Robinson card.

I placed my order on Monday. They told me it would arrive in 9 to 12 business days. It arrived in three days. I'm impressed.

The Robinson card arrived in a top-loader used for thicker cards and a penny sleeve.

The card is, in fact, thicker than a regular card. I wasn't expecting that. For some reason, I thought it would be as cheap-ass thin as most of the cards that come out of packs these days.

But it's as thick as a nickel, I'd say. I'm no expert on materials, so I can't tell you how it was made. It has a plastic-like feel. It reminds me of a Christmas ornament you'd hang on a tree.

The whole card features a shine on the front that I would equate to a freshly cleaned plate-glass window. It is very shiny. And the diamond behind Jackie's head glows and sparkles as you move it from side-to-side.

It's a little mesmerizing, I think.

The scan, of course, can't even come close to conveying the shininess of the card. I don't know why I scan cards like these anymore. You can't even see the shininess of the diamond. I want you to be awed by the shiny. I want you to be so captivated that you fall into a deep trance. You will do anything I say. You will send night owl cards. You will send night owl cards.

Of course, I nearly panicked when I first pulled the card out of the top loader. 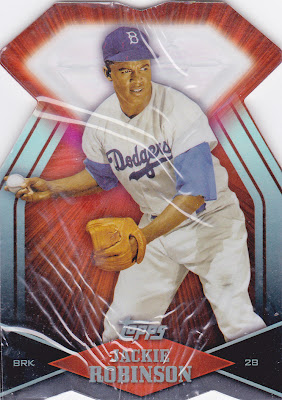 See all those wrinkles? I thought they were on the card!

Fortunately, I soon realized that there was a piece of acetate covering the card. It came off much easier than those Finest cards from the '90s.

I ordered three other vintage cards from my Giveaway portfolio to keep Jackie company.

Here is the tale of woe: 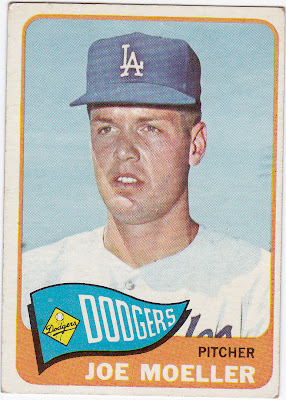 Joe Moe looks fine. A nice-looking '65 card. The borders are slightly dinged and cockeyed, but this is all you could ever ask for in a 1965 card. The back says Joe enjoys water skiing and surfing. Duuuuuude. 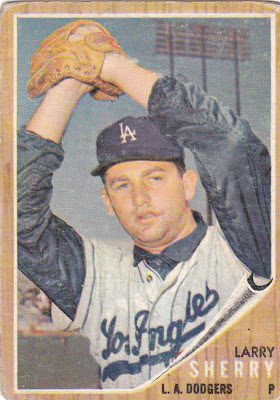 A little disappointed with this one. I was looking forward to a snazzy version of this card. I know Topps makes no promises, but just about every '62 card that I have picked up has looked better than this, and I'm not even trying to find perfect specimens.

I don't care so much about the rounded corners. It's the faded nature of the photo. And, you can't see it very well, but it looks like someone used the card as a coaster. I see what looks like a drink ring in the left center of the photo. 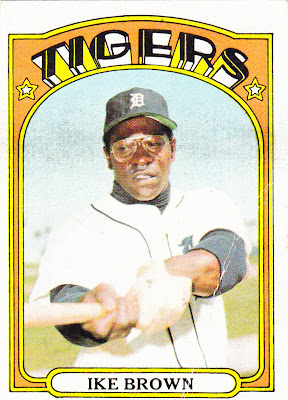 Bleah. Ike's card is creased in the right corner. And there are scuff marks on either side of his head, as if there is black smoke pouring out of both ears. It's way off-center, too. I don't care about the off-center part at all, but damn, why throw all three problems at me?

I really shouldn't complain after the good luck I had with the cards I received in the Million Card Giveaway, but I was hoping for items in a little better shape.

So, let's all look at shiny Jackie again: 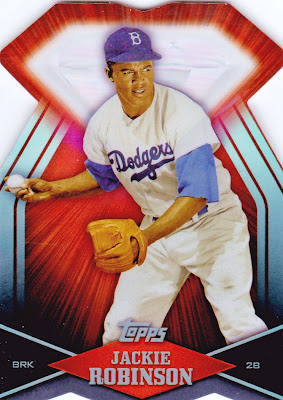 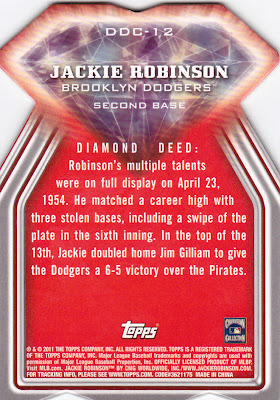 In a trance yet?

Play at the Plate said…
Who says diamonds are a girl's best friend? It looks like Topps sent Jackie with a rough bunch. Maybe it was for his own protection.
May 27, 2011 at 1:12 AM

Bo said…
You're disappointed with the condition of those vintage cards you got from Topps? I recently saw a blog post where someone said it doesn't get any better than beat up vintage. Maybe you should send those cards to that guy...
May 27, 2011 at 10:16 AM

night owl said…
My people are cranky on a Friday.

If only life were that simple, right?

The two situations aren't the same.

The cards in the beat-up vintage post were sent to me by a collector out of the kindness of his heart. It was an unexpected gift, probably cost him some cash, and they were mostly cards from the '50s in which I have almost no expectations of condition. This person is not a profit-making company.

The cards in this post were sent to me by a profit-making company, didn't cost them anything (yet I paid shipping), and included only one card I really had a problem with -- the '72 Ike Davis, because I am trying to complete the set with some semi-decent conditioned cards and this one was SO off. It was more about my expectations of the cards received from Topps. But I feel it's my duty to point out the condition of cards from a company from which so many other collectors are receiving cards.

Mark Aubrey said…
Greg - letters with accents? Find one on the web and cut-and-paste.

Two Packs A Day said…
Is the diamond done with Rainbow Foil or some other technology?

night owl said…
It's not foil. I don't know anything about card technology. The diamond looks like a cluster of glass panels, like on a diamond. I have no idea how they did that.
May 30, 2011 at 3:43 PM