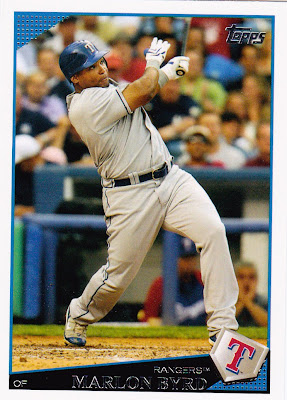 I have a soft spot for players who help the National League win the All-Star Game. You won't catch me saying anything nasty about Gary Carter, George Foster, Ken Griffey (Sr., not Jr.) or Sandy Alomar Jr.

That is why even though Marlon Byrd and Brian McCann each play for teams that I am sick to death of -- Byrd for the Cubs and McCann for the Braves -- they get a pass, because they have helped accomplish what must be done to maintain balance in the galaxy -- ensure that the N.L. wins the freaking game.

It is also why I give Byrd a pass even though he was the elusive last card in Series 1 of the 2009 Topps set. I can't stay mad when I see a replay of his throw to eliminate David Ortiz at second base last year. Also, that card happens to be a night card (he may also be on a night card in the 2010 set, but it is much too difficult to tell).

But, unfortunately, Marlon, it is time to say farewell. Even after that scary as hell beaning. 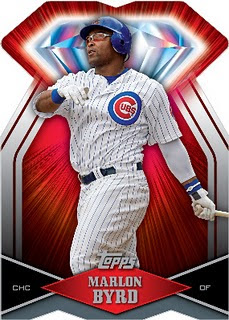 I traded away my Marlon Byrd Diamond Diecut card yesterday. It just wasn't doing what I wanted it to do. I wanted to obtain a Dodger Diamond Diecut for the card, but even when I packaged it with some other cards (decent stuff -- not late '80s cards), I couldn't get anyone to budge. As usual, they never decline the trade, they just let it die on the vine for a week.

After several of these attempts, I realized it wasn't going to happen, so I swapped it for this: 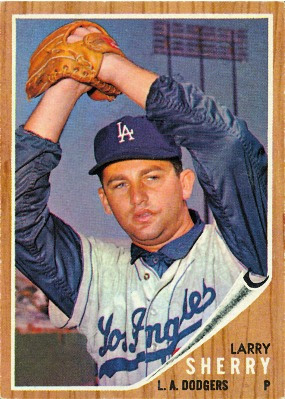 I probably could have done a little better, but I absolutely love this card. It's my favorite 1962 Dodger card. In a set that is plagued by head shots, you have to appreciate the wind-up pose. I also greatly enjoy that Sherry is wearing the customary jacket under his uniform, and the light tower framing the photo. Plus, I have a thing for 1959 World Series heroes.

After redeeming FOUR diamond diecut cards, I just didn't value Byrd like the others. It's difficult to do that when the others are Jackie Robinson (by way of Babe Ruth), Reggie Jackson and Roy Halladay.

Halladay was already dealt for some key Dodger vintage, which leaves me with two diamond diecuts. 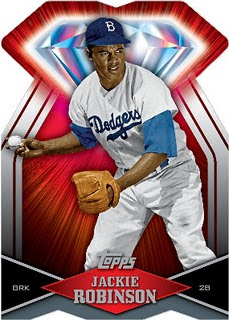 I just put in my order for the Jackie Robinson card. After turning down countless offers for this card, I determined that there is no way I'm ever going to trade it. So I will gladly await its arrival and anticipate it dazzling me with its diamond display. I will expect nothing less. If the mail carrier is not wearing sunglasses, I will be shipping an email to Topps. 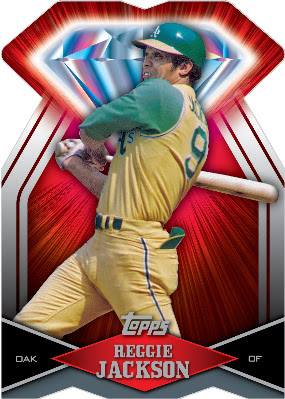 I am leaving Reggie Jackson in the portfolio for now. I don't anticipate trading it, but he's not a Dodger, so anything can happen. And by "anything" I don't mean that I trade it for a 1987 card and two 1988 cards. I can't even count the number of offers like this that I have received for this card, and I haven't even owned it for a week.

I have a dozen cards in my portfolio right now and I like all of them. They all are either Dodgers I need, or cards from sets that I need, or the diecut thingies. Even though you get dozens of insulting trades a day on this thing, it is very easy to trade for cards you want and get rid of cards you don't. At least it is for me. Anytime I redeem something I have already, I don't hang on to it for long, and I obtain something I want.

Maybe that's because I'm willing to end up with the "lesser" deal in the trade as long as I get something that satisfies my interest. That's why I ended up with the Sherry card for the Byrd diecut. Maybe some see it as a steal for the trader who received Byrd, but I don't look at it in those terms. There is no one upmanship.

The majority of card bloggers understand this concept and they make up the best set of traders I have ever encountered. But the majority of Diamond Giveaway participants still have the collecting brain of a 12-year-old and desperately need to announce to someone "look who I ripped off!"

Such a pleasant character trait.

Another good thing about the Diamond Giveaway: I don't have to see these kind of traders face-to-face.

So long, Marlon. You've done your duty. Just like you did last July.

A2 Wolverine said…
Last years contest sucked compared to this year. I've managed to get quite a few cards I've wanted. Whatdya say a few 90's and 74 Yankees team pose for the Reggie? Only kidding.
May 22, 2011 at 7:35 PM

AdamE said…
I have completed 28 trades though. Anytime someone offers me a card from the same year or newer I take it even if not a Red Sox. I figure a 70s card is better trade bait for 70s Red Sox than an 87 Topps. But than again my virtual stack isn't really growing. All in all not bad for only redeeming one single code.
May 22, 2011 at 10:00 PM