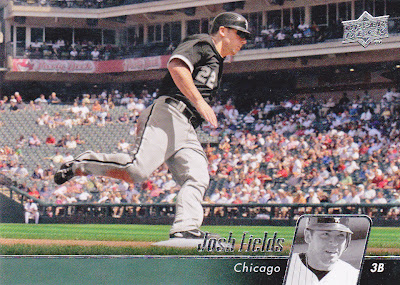 I've whined a lot about the past month. Probably more than I should. I mean, nothing catastrophic happened in the last 29-plus days.

But even though I have it better than a lot of people in this world, I still think I'm deserving of a break for what I went through this month, even if I have to make my own break.

So that's what I've done.

I have taken Thursday and Friday off from work.

I don't plan to fucking move for 48 hours.

It has been a long time since I have not had to work the first day of the baseball season. I'm sure I was in college the last time that happened. So, you can understand why I'm so giddy. I'm so happy that I have done something that I haven't done since I was involved in fantasy baseball back in the mid-1990s. I have actually paid attention to how some of the baseball teams look entering this season. I'm actually INTO that stuff. Really, I am. Ask me who is in the Padres' starting rotation. Go ahead. Ask me. I actually KNOW. Before if you asked me that, I'd answer with, "assholes." Now, I actually know the assholes by name. (And Latos is on the DL. ... excuse me for a moment ... AHAHAHAHAHAHAHAHAHAHAHA!!!!!!)

I feel so equipped that I'm going to provide my predictions for this season.

I know. I know. I never do that. I think it's stupid. But I can't let all this knowledge go to waste. Besides, no one else on the card blogs is doing it. By this time a couple of years ago, 48 blogs had told me who was going to win the A.L. West. Now, apparently, no one cares.

So, here you are. The way the 2011 season will play out. With brief commentary from a suddenly enlightened (and foul-mouthed) night owl.

1. Red Sox: Adrian Gonzalez should hit at least 40. But the best part of the team is the pitching staff.
2. Yankees: As usual, the offense is obnoxiously, appallingly, disgustingly good. But the pitching staff is borderline laughing stock. And I really hope I'll be laughing. A lot.
3. Orioles: Buck Showalter wins points with me for pointing out that Jeter backs off of pitches to win calls (not that we didn't all know that). But besides that, Showalter has arrived right when a lot of their young players should arrive.
4. Rays: I just don't think Damon and Ramirez will do much. They youngsters are good, but they got rid of a ton of talent.
5. Blue Jays: I'm hoping they finish third (hell, I'm hoping they finish first). But they have lots of questions on the hill.

1. White Sox: As usual, any one of three teams could win. But I really like Chicago's pitchers.
2. Twins: Health issues could kill Minnesota. Otherwise, they're fine.
3. Tigers: Just not impressed. If Miguel Cabrera shakes the bottle, though, it could be a great year for Detroit.
4. Royals: I say the turnaround begins this year. Last place isn't good enough for this team anymore.
5. Indians: Hey, I like Carlos Santana as much as anybody, but he's just one guy.

1. Rangers: I'm still not exactly clear how the pitching staff got this team to the World Series. But I chalk that up to my idiocy. They'll finish first despite me.
2. A's: This team might average 1.3 runs a game. That won't be good enough for even a really good pitching staff, especially if Bailey's injury issues continue.
3. Angels: I think I lost all respect for the Angels when they traded for Vernon Wells. Eeesh. This used to be the team that embarrassed everyone else.
4. Mariners: They'll be better. Just don't think they have enough to move anywhere.

1. Braves: They might be the smartest organization in baseball. In fact, if they end up beating out the Phillies, I don't want to hear any Atlanta fans whining about their team anymore. There are so many other teams that operate much worse.
2. Phillies: I don't know. I just feel Philadelphia is setting itself up for a big fall. There are no guarantees.
3. Marlins: They're always there and nobody knows how they got there. This year, they have some players that will leave no doubt.
4. Mets: The pitching staff is flat-out scary. Awful scary.
5. Nationals: It's still where washed-up players go to disappear. That's right, Werth, you heard me.

1. Brewers: Some early injury issues, but they've got a ton of talent, more than anyone else in the division.
2. Reds: I wouldn't be surprised if they slip a lot this season. Brandon Phillips will open his mouth and cause half his teammates to be injured.
3. Cardinals: A lot of bad things have happened already. But they always find their way into contention even if the talent isn't there. They're just so super scrappy.
4. Cubs: They seem to have half a pitching staff and half an offense. I really like some of the players, the rest are bluuuurrrggghhhh!
5. Astros: Even in my heightened awareness state, I can still name only six Astros.
6. Pirates: They've got some players with potential, but playing in front of 1,091 fans every night can wear on you. Stupid Sid Bream.

1. Rockies: Their pitching staff isn't better than the Giants, but I just can't pick a team with the offense like San Francisco's to repeat.
2. Giants: I have voodoo dolls of Lincecum, Cain, Sanchez (I have TWO of Sanchez) and Bumgarner all lined up on a shelf. I'm not worried about Wilson. He'll implode all by himself.
3. Dodgers: I think I've seen enough from spring training already. They just don't have it. It's going to be another season of pleading with them for that third run every game.
4. Padres: Could easily finish last. Hope they do. Punks.
5. Diamondbacks: Gibby may lead them out of the basement. When is Justin Upton going to be All-World like I've been hearing forever?

So, there you are. Try not to get all hyper about it.

I suppose you're wondering why I went through all that and I still haven't mentioned the card at the top of the post.

Well, I simply featured it because I like wide stadium shots and it reminded me of baseball and summer.

I have no idea who he is.

So maybe you shouldn't take any of these predictions all that seriously.

All right, if you need me, I'll be scouting out a prime television viewing position.

hiflew said…
The Rockies just traded for Fields yesterday. He is pretty much nothing more than a journeyman and a AAAA player (still more than I could do) that will be Colorado Springs' third baseman this year.

I hope you are right that Colorado will FINALLY win their first division title ever and I'll even hope that the Dodgers finish 2nd in division. Although I will still hope that the Wild Card comes out of the Central.
March 29, 2011 at 7:50 AM

Doc said…
First thing I thought halfway through the post was "Wow, that is some uncharacteristic language."

Kevin said…
I'm so torn. If the O's take third place, I'll be dancing on Eutaw Street. But if the Sawx win their third World Series in eight years, I might be reaching for the cyanide.
March 29, 2011 at 8:30 AM

See what March has done to me? I'll return to my sweet self in two days.

Anonymous said…
I think you are confused in your Reds/Cardinals kerfuffle. No Reds were harmed during that event.

Steve Gierman said…
I pretty much agree with hiflew's assessment of Josh Fields. He never lived up to the potential in Chicago, but he will always hold a special place in White Sox fans hearts since he hit a grand slam in Mark Buehrle's perfect game.

Anonymous said…
I've got the afternoon off on Thursday, can't wait. Had to order the MLB Xtra Innings package to get my Reds (I order it anyways). I hate that they aren't the first game like they used to be, but either way can't wait for Thursday afternoon!
March 29, 2011 at 2:04 PM