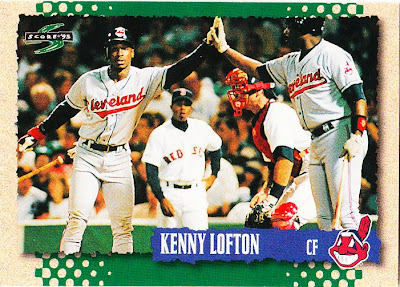 I was in the midst of attempting to put together a convoluted night card post when I realized that it was never going to work, and I really should go with what worked best when I was nine years old:

Study the hell out of the tiny little thing in front of you.

I don't do that enough. The other day I was pulling some pennies out of my pocket and got a glimpse of one that didn't feature the usual Lincoln Memorial. I thought about how coins now feature a variety of items on them that they never did before -- and I have no idea what they are. I barely look at my coins.

But when I was young, I studied my coins vigorously. I checked the date on every penny and memorized them. My dissection habits didn't end with coins. I would sit on the ground and examine the ants crawling along the sidewalk, building homes in the cracks that broke your mother's back.

I would scour the backyard for just one, solitary four-leaf clover, but instead turn up hundreds upon hundreds of three-leafers. I would comb the rocky hillside behind the garage for as many varieties of rocks that I could find, place them in a bucket, wash them off and have, well, clean rocks.

When I was indoors, the basement downstairs doubled as a mecca to tiny. Tiny Matchbox cars in a variety of colors and personalities. Tiny wild animals that came in large, plastic bags of 100 at the area Woolworth's. Tiny dinosaurs and tiny soldiers.

And, of course, tiny players shrunken down onto a rectangle that wasn't even 3 inches tall or four inches wide. 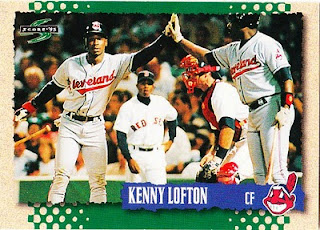 If I'm going to study the hell out of the card, then the most logical thing would be to see if I can determine which moment from which game is depicted here.

A few assumptions are necessary.

If this is a 1995 Score card, then the game likely was played in 1994. Also, the game obviously took place at Fenway Park, and, of course, was at night.

Kenny Lofton apparently has just scored and is being congratulated by Eddie Murray, who, with bat in hand appears to be the next batter at the plate.

Off to baseball-reference.com I went.

The first thing I found out is something I already knew: Kenny Lofton scored a LOT of runs. The second thing is Cleveland played at Boston on two separate occasions, a series in May and a series in August. I ruled out the August series because Murray was never in a situation where he was even close to batting after Lofton scored.

The third thing is this photo could have been from two different games in the May series.

Lofton scored in the fifth inning of that game, a 5-3 win by the Indians. He tripled with two outs, then sat on third base as Wayne Kirby walked and Carlos Baerga was hit by a pitch. Then, Albert Belle hit a ground single up the middle. Lofton scored and Kirby scored. Murray then grounded out to end the inning.

Lofton scored in the first inning of that game, a 13-5 win by the Red Sox. He singled to start the game, then went to third on a one-out single by Baerga. Belle then grounded to the pitcher, Joe Hesketh, who threw the ball away for an error. Lofton scored. Murray was the next batter and reached on balk.

So, I went back to the photo to see if it offered any clues as to which game it was. 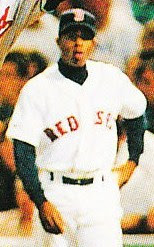 This guy was no help. I was hoping he was a pitcher that I could pinpoint. But judging by his relatively small stature, and no glove, he must be the bat boy, coming to retrieve the equipment.

There's the equipment now. Lofton is tossing away the bat, so any runners following him won't break an ankle stepping on it.

This makes me think that the photo is from the May 24th game because Kirby, who was on second base when Belle got the hit, also scored behind Lofton.

(By the way, the 9-year-old me would think this part of the card is cool because with the batting glove sticking out of Lofton's pocket, it makes it look as if Lofton has a third hand that is tossing away the bat).

The catcher makes me think that it is from the May 24th game, too. He appears to be waiting for a throw from the outfield, which is where Belle's single went, not a throw from foul territory, which is likely where Hesketh's errant throw traveled in the May 26th game.

There is one other hint from the stats about the two games. The May 26th game started at 6:05 p.m. Given that Lofton scored in the first inning of that game, I'd say it was still daylight out at shortly after 6 p.m. on May 26th. It certainly wouldn't be as dark as it is in the photo.

So, I'm going to say it was the fifth inning of May 24th, 1994, when Lofton scored on a single by Belle during the Indians' 5-3 win over the Red Sox at Fenway Park in Boston, prompting a high-five from the next batter, Murray.

That might be too much for my 9-year-old self to absorb.

So here's the part of the card that I would have focused on the most when I was little.

TJ said…
Wow. That is some great work there, Detective Owl.

As it turns out, I was at that game. I know this, because May 24th is my birthday and I moved to Oregon in June of '94. I remember going to Fenway on my birthday right before we moved! This was the last Sox game I ever went to. I don't remember the details of the game, but because of your hard work, you brought back a great memory for me. I thank you, sir.
March 13, 2011 at 5:11 PM

Laurens said…
I'll be a contrarian and say its Berryhill.

I think I could make out a 'faint' No. 6 on the catcher's wristband - the number Berryhill wore on the Red Sox.

I tried to look for the actual image and while I didn't find what I was looking for - discovered Valle wore a helmet without a brim on the back and the guy on the Lofton card clearly has a brim on the back of his helmet.
March 13, 2011 at 8:52 PM

LoCoDe said…
I have to say that I agree with Laurens. That looks like Berryhill to me as well, and, if Kirby was coming in to score behind Lofton, Lofton would surely be giving him the slide or not to slide sign, and not already slapping hands.
March 14, 2011 at 2:41 AM