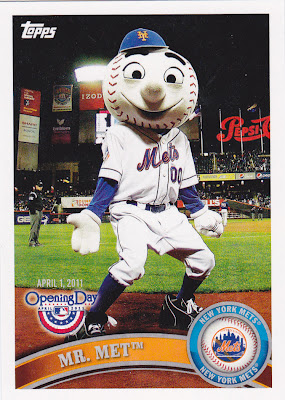 I'm in the middle of the kind of hassle-filled day that only March can bring. So why not lend a little levity to the proceedings?

I like mascots. That's a change from the past years when I didn't.

Back when I first followed baseball, there were no mascots. Baseball was a joyless, regimented pursuit. Then the San Diego Chicken (first known as the KGB Chicken) was born. He was creative, funny and seemed to have a regular time slot on This Week in Baseball.

The Phillie Phanatic phollowed. Then came Montreal's Youppi, which I always pegged as the mascot most likely to be beaten up. 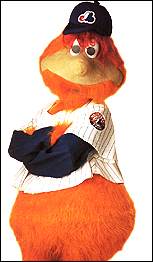 I'm not entirely clear on the order of appearance of the mascots. But somewhere in there, the Cardinals' Fred Bird snuck in, too, which I didn't think should have been allowed to happen.

But allowed it was and the door swung wide open, and soon almost every team had a giant, oversized mascot. When the Red Sox trotted out Wally the Green Monster in the late '90s, I thought major league baseball officially had turned into a carnival act. I kept waiting for the Dodgers to unveil their mascot (but then I realized they had Tommy Lasorda) and the Yankees to reveal theirs (but then I realized getting dressed up as a mascot in Yankee Stadium is a death wish).

But somewhere after that, I began to embrace the mascot. I don't know the reason for the change. Maybe it was because the mascot isn't the only thing different about today's major league game. There are so many features at ballparks that take your mind away from the game. That's not necessarily a good thing for the pure fan of baseball. But if you have family at the park, they're not all going to be interested in the infield fly rule. Throw them a bone.

Plus, mascots make me laugh. Every time. OK, some are stupid and not creative at all. But if they're in the ballpark when I'm in the ballpark, just the sight of them will get a laugh out of me. It's big, it's goofy, and unlike your big, goofy uncle, it doesn't smell -- most of the time.

So here's to Mr. Met and the first mascot night card I've ever owned.

That Opening Day has a lot going for it.

Speaking of which, this card came in the same pack as Mr. Met: 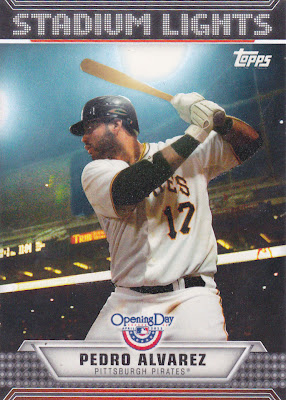 It's my second Stadium Lights card (yes, I'm going to show every single one of these things).

I didn't remember Alvarez being listed on the checklist of the Opening Day Stadium Lights insert set. So I turned the card over to look at the number on the back. 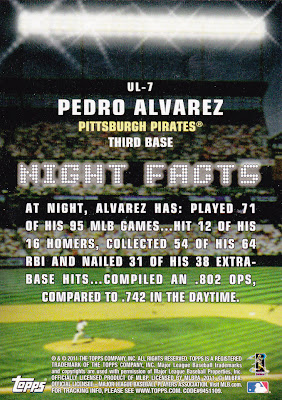 It's No. 7. But when I checked the checklist on baseballcardpedia.com, Vladimir Guerrero is listed at No. 7. There is no Alvarez listed.

This is probably just an error on baseballcardpedia, which is normally a terrific source of information. If I was certain about this, I'd try to correct it myself (instead of just rambling in a blog post).

But I'm secretly hoping it's a super-secret parallel card in the insert set.

Wouldn't that be something? Gimmicking Opening Day?

Yes, I've just come out in favor of both mascots and gimmick cards. Night Owl needs a vacation.

hiflew said…
I got the Alvarez as well and was equally surprised expecting a Guerrero.

And oh please be joking about gimmicks in Opening Day. It's the only set left worth fully building (inexpensively at least).
March 21, 2011 at 6:39 PM

Anonymous said…
Love both those night cards! Wow! They might be better lookin' than 90% of the cards you had in the Night Card contest.

AdamE said…
My son is scared to death of mascots. When at a game he always tries to keep an eye on them so he can stay hidden if they come close.
March 21, 2011 at 6:54 PM

LoCoDe said…
Youppi is still active as the mascot for the Montreal Canadiens.

I remember watching TSN (the sports network) in Canada a lot in the mid to late 80's, as they covered the Expos. They had this running gag with Hubie Brooks, where the insinuation was that because you never saw Hubie and Youppi in the same place, it meant Hubie was Youppi. Hubie was a good sport and played along, but I know that inside his spirit was cracking slightly with each gag.
March 21, 2011 at 9:03 PM