March 07, 2010
This is probably better suited to my other blog. But that's what makes the 1975 Topps set so great. There is so much awesomeness in this set that it can't be contained to one blog!

The aspect of the '75 set that I wanted to mention today concerns the All-Time Fan Favorites set that Topps put out from 2003-05. I've mentioned this before: it needs to come back. It was a great set. Plus, it can take a lot of the credit for my return to card collecting.

When I started collecting cards again in 2004 my only goal was to complete the 1975 set. But the act of collecting perked my interest in cards that were sold in stores. I wasn't interested in the current card set of the day (2004 Topps still makes me sleepy). But I picked up a couple packs of '04 Fan Favorites and I was hooked.

I tried to complete the entire set that year, but fell short. I'm still short a number of cards. But it's my goal some day to finish off that set as well as the 2003 and 2005 Fan Favorites sets.

For the most part, Topps did a pretty good job. 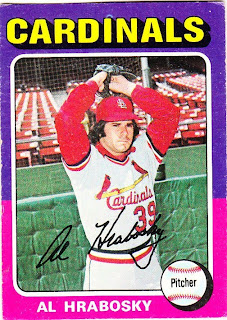 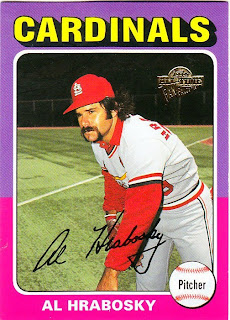 And there's the Fan Favorite version. Same color scheme, although Hrabosky has suddenly grown facial hair, which he didn't have in 1974. 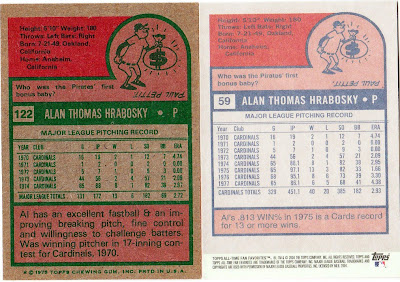 You can see the backs are almost identical in content, except for the added career stats for the Fan Favorites card. Even the cartoon is the same. 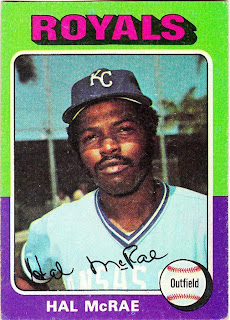 The pattern continues with Hal McRae. This is his 1975 card. 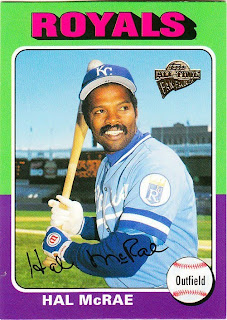 And here is his Fan Favorites card. He looks a bit happier here and a bit older. He certainly isn't thinking about tossing tape recorders at reporters at this moment. 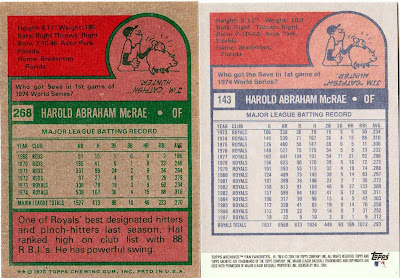 Those are the backs side-by-side. Both show Catfish Hunter stockpiling some cash, which is appropriate considering he was one of the first free agents. 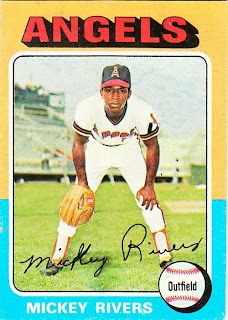 Sometimes the cards varied ever-so-slightly. This is the 1975 Mick the Quick card. 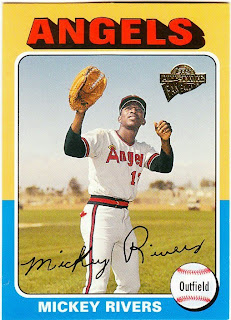 And here is the Fan Favorites card. You'll notice that Topps couldn't or wouldn't match the blue shade used in the '75 set. 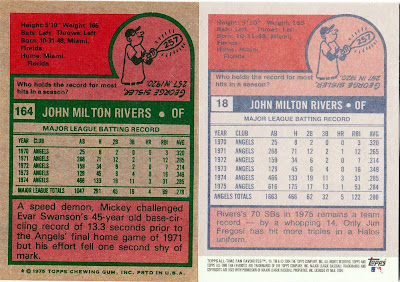 But the card backs are the same. The George Sisler cartoon hit the streets when little Ichiro was a year old. Thirty years later, he'd have Sisler's record. 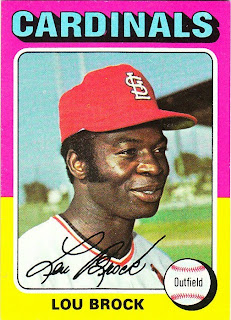 The Lou Brock cards differ on the front. This is the 1975 card. I love this card. Finding '75 cards with even borders is not easy. There were a lot more centering issues back then. But this one certainly meets my definition of a nicely centered card. 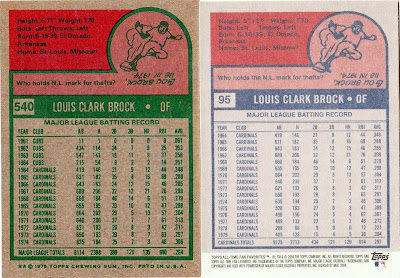 There is the back for the Brock cards. Lou is the subject of his own cartoon. That's what 118 stolen bases in a season will get you. 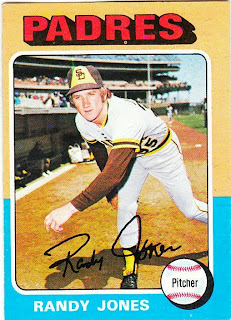 That brings me to Randy Jones, who marches to his own drummer in this set. This is the the '75 Jones card. 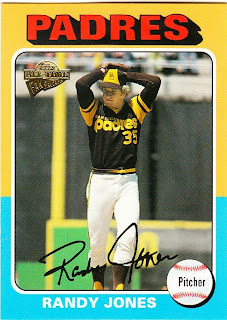 And here is the Fan Favorites card from 2004. You can see Topps got the color shading right unlike the Rivers card. But the photo is all wrong. The Padres would not wear those taco uniforms until 1978.

Then there are the issues on the back. 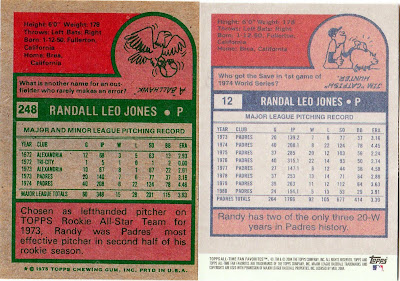 For one, Jones appears to have lost an "L" in his first name over 30 years time. (The '75 card features the correct first name).

But look at the cartoons. Unlike the other cards, they're different. And that Fan Favorites cartoon is awfully familiar. It's Catfish Hunter stashing his cash again! Topps must have screwed up the cartoons because there is nothing about the '75 ballhawk cartoon that would make them have to change it.

I really want to get the other Fan Favorites cards that use the '75 design to see if there are other exceptions. And then I can bore you about the differences once again.

Field of Cards said…
Wow. You literally tapped into my two of my favorite sets of all time and put them side by side. This is top notch.

It's funny how even the greatness of Fan Favorites modern day technology can't really quite unseat the perfection of the 1975 set (especially the backs).
March 7, 2010 at 11:59 PM

Two Packs A Day said…
your blog brought up another thing I like about ATFF - the front photos were different than the originals because topps went into their photo archives to find a different photo to use for ATFF that was from about the same time as the design (but as you note, I guess they gave themselvs about 5 year leeway on the photos, citing the Jones example).

I also like the set in that it featured some announcers and PA announcers, so it branched out from more than just players and umps.
March 8, 2010 at 12:41 AM