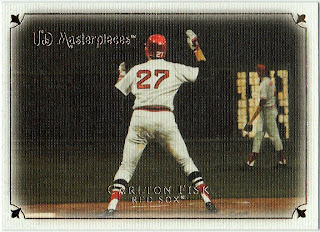 Things to do while your team is being eliminated from the postseason:

1. Around the 5th inning, leave the room that features the television, but keep the volume high enough so you can hear the crowd.
2. Check the card blogs.
3. Comment on a couple.
4. Go in the kitchen. Evaluate how well you did grocery shopping earlier in the day.
5. Find a snack that, at 4 in the morning, you won't regret eating.
6. Check the TV again.
7. Decide that's a bad idea.
8. Scan, scan, scan cards for the '75 Topps blog.
9. Check the blogs again.
10. Check the TV once more because the towel-waving fools have gone quiet. See Orlando Hudson hit a home run.
11. Leave the TV shortly afterward because Ron Darling is answering a question about hitting again. (Buck Martinez, I know you batted .225 for your career, but when some ridiculous question comes out of Chip Caray's mouth regarding offense, please speak before the ex-pitcher does!)
12. Write out a to-do list for tomorrow.
13. Think of how at least this is better than having to be at work and writing a headline about how wonderful the Phillies are, like I did last year.
14. Be in front of the TV for the top of the ninth -- not to watch a miraculous Dodger rally, but to turn off the TV before Caray can say, "Ladies and gentlemen, your 2009 National --- *click!*)

OK, enough of that. On with the night card. Today is the 34th anniversary of Carlton Fisk's 12th-inning, game-winning home run to end Game 6 of the 1975 World Series. Some of you may know that the game actually began on Oct. 21. But it ended Oct. 22, at 12:34 a.m., as Fisk watched his blast off Pat Darcy bounce off the mesh connected to the left field foul pole in Fenway Park.

Many people point to this home run and this Series as the moment when baseball returned to the collective consciousness of the American sports spectator. From about the late '60s, football was the new fascination for fans. As a 7- and 8-year-old, I distinctly remember kids walking around wearing Jets or Dolphins or Redskins jackets (they were the top NFL teams of the early '70s). I remember very few kids wearing MLB jackets.

But that began to change in the mid-70s. After Fisk's home run, the Yankees re-emerged as a baseball power, and there were dramatic World Series in 1977, 1978 and 1979. My friends talked baseball first, football second.

The Fisk home run was my awakening to baseball, as well. It is the first baseball play that I remember seeing on television. I don't recall watching that particular World Series, probably because it was on too late for me. I likely saw a replay of the Fisk home run. And from 1976 forward, I have watched every World Series.

Baseball remains extremely popular with the public, although it's not as popular as football now. I find many things about football that I don't like. They range from "not my style" to semi-disturbing. That feeling has grown inside me more and more each year.

When I was in college, I had George Carlin's monologue on the differences between baseball and football (the implication was that baseball was preferred), and Thomas Boswell's "99 reasons why baseball is better than football" taped up on my wall. And that was when I was more into football than I have ever been (Buffalo, after all, lives and breathes its football team). But even then, I knew where my allegiance was.

Baseball is different. There is sameness to many sports -- goal on one side, goal on the other, offense tries to get the ball in the goal -- that wears on me after awhile. Baseball doesn't have that. Some folks say baseball is "boring." Baseball is not boring. It has moments of quiet, strategic maneuvering that enhance the drama of a play at the plate, a triple along the right field wall, a diving catch, a stolen base, or a spectacular double play. Suspense builds in baseball in a way that is unlike other sports.

And there are the other things that Carlin mentions -- the pastoral nature of the game, the pleasant weather, the friendly chatter in the stands, the relaxed atmosphere, or rather, the less intense atmosphere -- that make it the game for me.

In my area, on the high school fields, baseball is in direct competition with lacrosse, another one of those "get-the-ball-in-the-goal" sports. Lacrosse has been growing in popularity on the high school level for over a decade. I can't say the same for baseball. That saddens me, and I often joke about lacrosse being a sport for kids whose attention spans are so short that they have to be running constantly because they shudder at the thought of standing still for a moment in anticipation of a pitch. But I fear that my joking may hold some truth.

I'll still watch football, although I watch much less of it than I did even three years ago, when I was parked in front of a TV every Sunday. I enjoy hockey quite a bit, and intend to watch more of it after the baseball season ends. Basketball is practically dead to me. As for lacrosse, soccer, field hockey, water polo, and any other "goal sport," I'll watch only if my job depends on it.

I can blame all of this on Fisk and his home run 34 years ago. He got me hooked. And I'll never let go.

Play at the Plate said…
Everytime they show that Fisk highlight I still watch it as if it is the first time. Even knowing how it ends, I catch myself wondering...fair or foul?
October 22, 2009 at 3:15 AM

SpastikMooss said…
I'm a kid who quit baseball for lacrosse. It was because I sucked at baseball and usually was designated right fielder/bench kid/situational bunter, and I wanted to actually play. I ended up getting in to lacrosse when it was young in my area and played goalie on my school's varsity team for three years. Plus I played in college. Good times.

So I think lacrosse is pretty cool. But I watch it a lot less than baseball. Which I watch a lot less than football. But if we're playing something in the yard, it's baseball.
October 22, 2009 at 7:05 AM

Greg said…
Great post, Greg. You've got a great young team there in LA, there's no reason to think you won't have another crack at the playoffs next year. I wish I could say the same about my Cubs; there's a long rebuilding process ahead of us. Well, ok, maybe not as long as my Royals (who have been rebuilding since '95,) but still long.
October 22, 2009 at 7:13 AM

Offy said…
I was only a little over a month old when the game first took place, but I love that '75 Series. Game 6 just might be one of the best games of all time. From Dewey's amazing catch in right that led to a double play to Carbo's pinch hit, game tying home run and finally Fisk's dramatic shot. I always wonder why they never ended up playing game 7. (At least that's how the story goes up here.)

Another story that they tell on the Fenway Park tour is how the camera man ended up catching all of Fisk willing the ball fair. Normally, the camera in the Green Monster would have followed the ball up into the air once it was hit, but right before Fisk hit that ball, the cameraman noticed a large rat on top of the camera. Fearing that a tip of the camera would bring the rat a lot closer for comfort than the cameraman would enjoy, they just kept the camera on Fisk which resulted in that famous shot.

Just checked and they even wrote about that in the New York Times so I guess there's truth to the story. Can't find anythingin there about Game 7 not being played though. :)

Nachos Grande said…
First, great story!
Second, I saw your comment on "Cards on Cards" about the two Allen & Ginter cards you still need - I'll be sending #30 your way this week - which is slightly ironic since it's of Ryan Howard...
October 22, 2009 at 12:38 PM

The Mojo Hand said…
Things could be worse you could be unemployed, and an Athletic Supporter Lol.