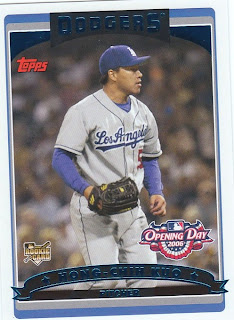 I'm featuring a night card of Hong-Chih Kuo today because he could be the difference between the Dodgers owning a steady bullpen and a bullpen in which they're constantly rotating pitchers in and out in an attempt to find something that works.

I thought of Kuo yesterday after viewing the boxscore of the Dodgers' first spring training game, a 5-3 loss to the Cubs. Reliever Ramon Troncoso got lit up for a homer and four runs in 1-plus innings. The Dodgers don't really know whether Troncoso is a starter or a reliever so maybe he's working some things out.

I'm still recuperating from the events of yesterday. There was a lot to absorb. Aside from the first spring training game, the Dodgers made another offer to Manny Ramirez. It's a lot like the old offer back in November with some slight adjustments. It really seems like Ramirez is about to sign. If not, than Boras is even more evil than I think he is.

Also, on the card front, aside from the first blaster of 2009, I received four card packages in the mail. Two of them, from Card Junkie and Blue Diamond, contained 2009 Topps: 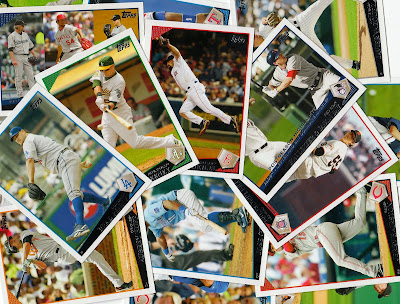 All cards that I need right there. Included in the assortment was ... 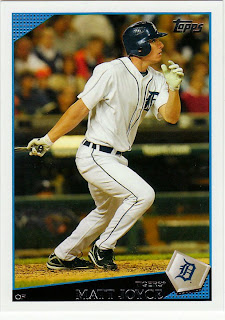 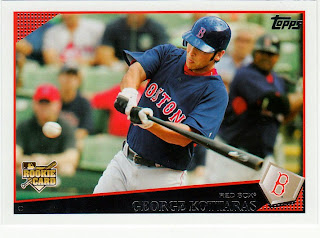 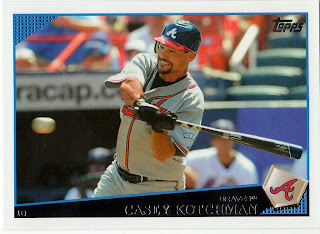 ... which looks a lot like this card of Braves first baseman Casey Kotchman, but doesn't make me love either card any less. They're both great.
The packages from Jeff and David, as well as the one featured last night from Greg, arrived only after this: 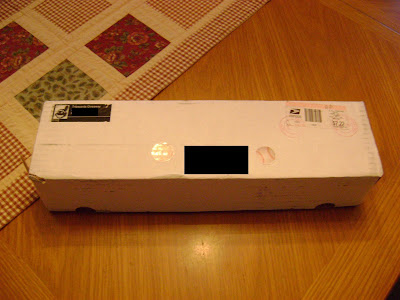 was placed in my mailbox. I really should have taken a photo of it next to something to show some perspective, but trust me when I say the box is a foot-and-a-half wide.
This arrived from David of Tribe Cards as part of some spring cleaning he's doing. The box is packed with cards. It's funny because I arrived back at my house while the mail carrier was doing her rounds. I noticed that there was something in the mailbox, and when I looked the box from Tribe Cards was the only thing in there. I took it out and went back out to run some more errands.
When I got back, the rest of the mail was there, including the other bubble mailers. It was as if the mail carrier said, "you deal with this monstrosity first, buddy, and THEN you'll get the rest of your mail."
It's going to take me awhile to digest all the cards that David sent. I hope to post about it tonight or Friday. There are some great ones in there from a great guy.

night owl said…
Ah, yes, the 800 offseason transactions that I can't keep track of. Change made. Thanks.

MMayes said…
After reading the blogs showing the 80's cards and the "rubber bat" effect, the Kottaras and Kotchman cards are either of a higher photographic quality or another photoshop job.

I'm going to say it's a combination of an improved shutter speed and digital technology....either that or these guys don't have any bat speed at all.
February 26, 2009 at 1:17 PM