February 04, 2009
(I'm posting the night card early this evening, because I've unearthed Upper Deck 2009 here in the hinterlands! I'll be posting the UD cards in the wee hours after I get out of work -- and if the scanner doesn't die on me). 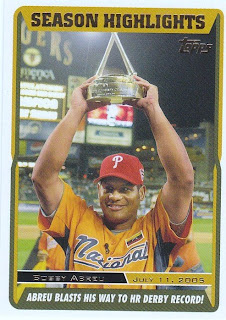 Yeah, both of them have their issues (Abreu's never been the same since the day this photograph was taken, and Dunn strikes out more than I do looking for 2009 Topps). But maybe it's time the Dodgers told Scott Boras to take a walk and signed one of those two guys.

McCourt and Colletti will absorb some grief if the Dodgers don't end up with Ramirez. But personally, I think they should stand firm and let Ramirez and the Deathlord come to them. Cause the Dodgers are all they've got.

If Abreu or Dunn is in Dodger blue this year. I ain't angry. If Pierre is the starting left fielder, that's another matter.

That's it for now. I'll be featuring Upper Deck '09 in, oh, about nine or 10 hours. Stay tuned, fellow night owl guys and gals! For those of you who have to rise and shine, the post'll still be there in the morning.