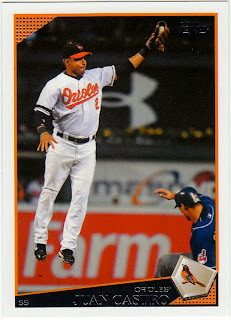 Over the last four or five years, Topps and Upper Deck have slowly come over to the dark side. By that I mean they're starting to feature night games on their cards. In fact, out of the limited number of 2009 Topps that I have so far, six cards feature players (and one manager) at work during a night game.

That may not seem like much, but in the entire 1989 Topps set, there was just one "night card." I don't think there were any in the 1991 set. Thanks to improvements in photography and especially card companies' willingness to venture away from spring training and get some regular-season action on their cards, we're seeing more night cards.

This card here is one such card from the spankin' new 2009 set. It's not a great shot, although you can't really go wrong with an action photo. Juan Castro, obviously, isn't getting anyone out after nabbing the high throw. (You can't tell on the scan, but the odd, silver foil dot pattern that Topps has as a design almost looks like a bank of lights in the top left-hand corner).

Castro was signed by the Dodgers this offseason to a minor league deal and invited to spring training (spring training begins today for the Dodgers!). He is nothing more than a back-up, good-field, no-hit infielder who can play a variety of positions. I'm a bit surprised Topps even featured a card of Castro, except for the fact that the Orioles played him in 54 games last season. They were really hurting for a shortstop last year.

-- He is a native of Mexico and played for his home country in the World Baseball Classic in 2006. He played the first five years of his major league career (1995-99) with the Dodgers. His best year was in 2003 with the Reds. He got his 500th career hit against the Dodgers.

-- He is the only major leaguer with more than 1,000 plate appearances who has never been hit by a pitch.

-- He underwent Tommy John surgery on his right elbow in 2007. Wikipedia says he is known as "Manos de Oro" or "Golden Hands."

This is about as flimsy a connection as you can make. Gant played in just 17 games for Oakland to close out his career in 2003, the same year Harang was just starting out. Then in 1968, Simmons played in TWO games for the 1968 Cardinals, which featured Roger Maris in his final season. Maris played 100 games that season. I'm not sure if both of them were around at the same time.

-- Final and best fact of all: Castro is on a night card! Good for him. Even if he never does play for L.A. this year.

Jeffrey Wolfe said…
I can say without even looking that only night card in '89 Topps is the John Tudor card. It struck me as a kid collecting the set because it was a night card and even more amazingly it was a non-airbrushed action photo of Tudor with the Dodgers where he only played a handful of games as a late season pickup. A rare scoop for Topps in those days.
February 13, 2009 at 4:15 PM

Kevin said…
"Hurting for a shortstop" is an understatement! I read somewhere that Cubs pitchers had a higher OPS than Orioles shortstops last year. Castro was far and away the best we had, because he could pick it. Alex Cintron had a pretty good bat, but was brutal with the glove. Castro DID hit a HR against the Yankees in a blowout win, which cracked me up.
February 13, 2009 at 7:44 PM