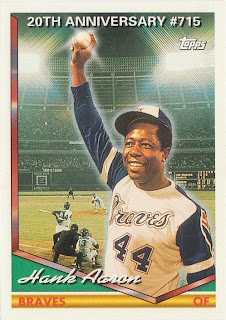 This week I am busier during the middle of week, which explains why I haven't been keeping up on my favorite blogs the last few days. I've also been worn down by the news of the sports world. For example, the NBA roundup that I put in today's newspaper included: a lawsuit, an arrest, a suspension and an apology. The NFL roundup featured a death and an arrest (a slow day for the usually lawless NFL).

The baseball roundup? Steroidpalooza. I'm sick of it. And so is everyone else. And that explains why Hank Aaron is growing into an almost mythical figure while he is still alive. Honestly, the way Aaron is treated nowadays is nothing like he was treated even 15 years ago, and 180 degrees away from the way he was treated 35 years ago. I am convinced that after Aaron's death, he will have Jackie Robinson status. Who knows, maybe baseball will be retiring No. 44 for good.

On April 8, 2009, baseball will celebrate the 35th anniversary of Aaron's record-breaking 715th home run, struck off of Dodgers starter Al Downing and sent into the night sky at Atlanta Stadium. (By the way, a little known fact: the Dodgers committed six errors in that game. SIX. And a passed ball. This is a team that would make it to the World Series that year).

You're absolutely right about Aaron. When I was a kid growing up in Georgia, Aaron was all right but he was no Ty Cobb. 15 years ago and he's finally bigger than Cobb, but he's no Mickey. He's no Willie. He's no Williams. Now he is turning into a baseball deity right now while we watch. It's kind of weird but I'm not complaining.

And Barry Bonds is the home run king. He's got more homers, he's the king. If Bud didn't want him to be the king, he should have suspended him. Aaron's up there with Ruth now.
February 19, 2009 at 6:39 AM

Unknown said…
I agree with your comment that Aaron is the "real human being", always was, always will be. Time (as in 15 or 35 years) does a wonderful thing to change societies perspectve on life and ones accomplishments . . . I just wonder what society will think of the "steriods era" in 15 or 35 years. It will bother me if time heals all.
February 19, 2009 at 8:41 AM

Dubbs said…
I hate to mention the A-word ... Asterisk...but Mark Ecko had something right going w/ his Bonds ball "touchup". I don't think a title, such as "Home Run King", will change the minds and hearts of millions of fans...TRUE fans...of the game. When Bonds broke the record, nobody cared. It wasn't like back when McGwire broke the Maris record, that was something serious. My professors talked about it during class for crying out loud. But baseball fans know about Henry Aaron, the guy who did it all without HGH and steroids and the rest. To me, it's just a title. Babe Ruth passed it on to Henry Aaron, and then Bonds stole it from Aaron and from baseball.
February 20, 2009 at 10:23 AM