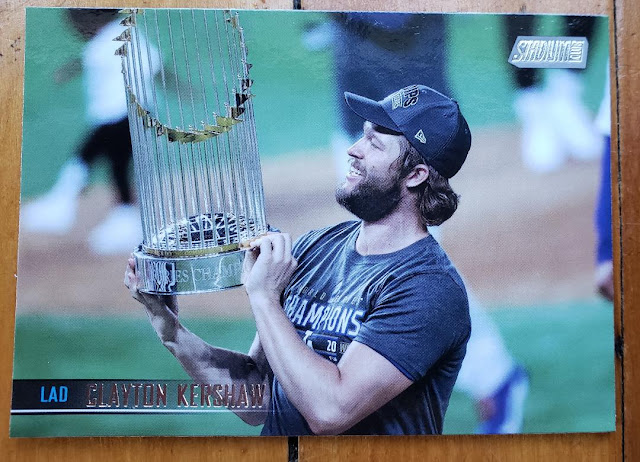 I've been admiring this Clayton Kershaw Stadium Club card ever since it arrived in the mail.
It captures the wonderful moment of Kershaw finally getting his hands on the Commissioner's Trophy after years of trying. It's an incredibly heartwarming moment for Dodgers fans captured on cardboard.
But it's not a cardboard moment reserved only for followers of the Dodgers in 2021. This trophy moment has been captured on Stadium Club cards just about every year since SC returned to the collecting scene in 2014. It's actually become a trophy tradition. 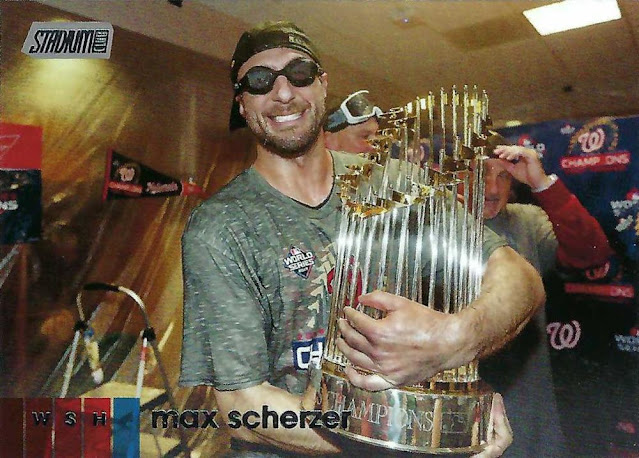 OK, so it's a tradition that can be a bit pesky to collect. The World Series trophy shows up on a short-printed variation image of Max Scherzer in 2020 Stadium Club.
I couldn't find a trophy picture in 2019 SC for the 2018 Red Sox's title so let's move on to the 2018 Stadium Club set. 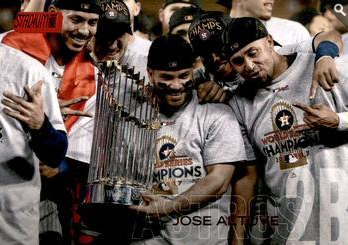 Ugh. There it is. That's a regular base card in 2018 Stadium Club. Get ready for a lot of Dodger Stadium boos in the next two days. Nope, sorry, no one's giving it a rest. 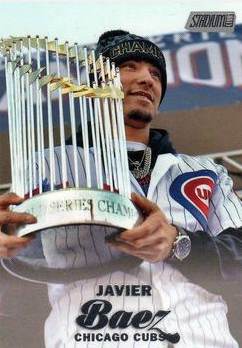 In 2017 Stadium Club, Topps returned to another variation image to feature the trophy. The recently traded Javier Baez is showing it off in this case. 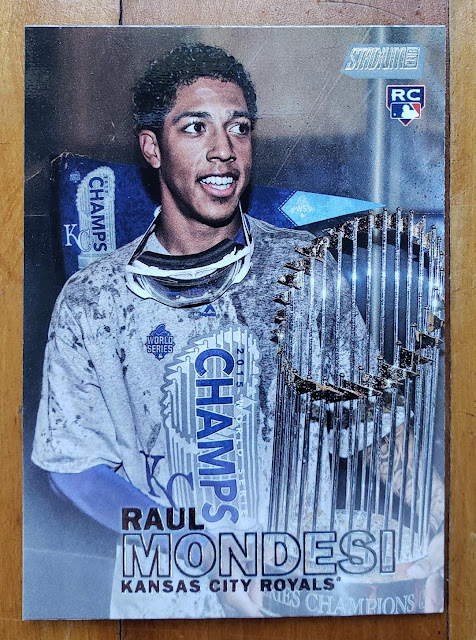 Back to the base set for 2016 Stadium Club as the trophy appears on the card of the Royals' Raul Mondesi to recognize Kansas City's title in 2015. 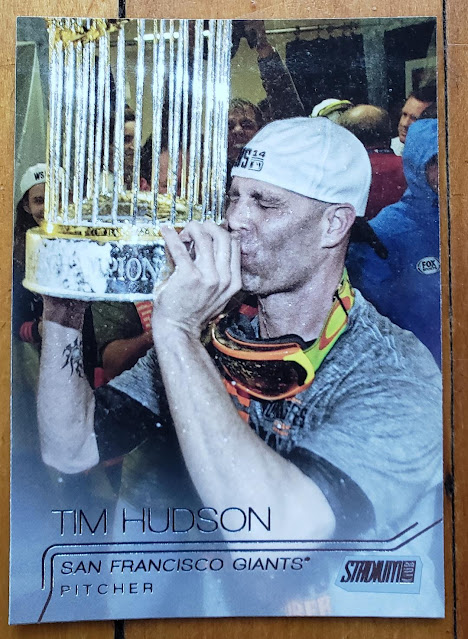 I made the poor decision of completing 2015 Stadium Club so this unfortunate photo is in my SC binder as the wild-card Giants were proclaimed Series champions in 2014. This card can kiss off, but at least the tradition continues. 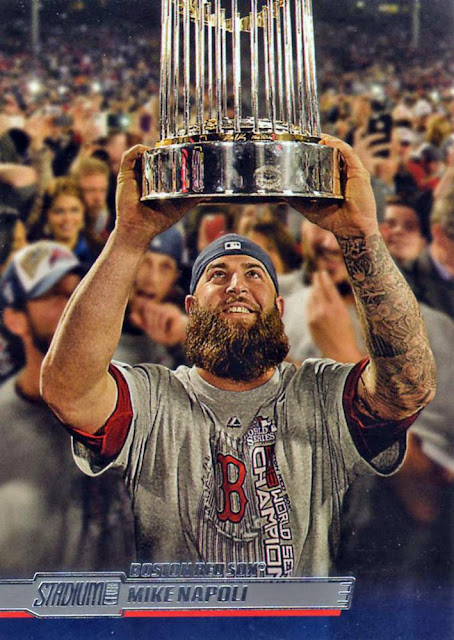 This is where the recent edition of Stadium Club's trophy tradition began with the Red Sox's Mike Napoli hoisting away in the 2014 set. The Red Sox won the World Series in 2013.
Before Stadium Club's re-emergence, finding the World Series trophy on cards was a little hit-and-miss, although it has been a much more regular part of cards for the last dozen years or so.
Although I'm sure the trophy has appeared with a player or manager on cards prior to 2008 (the 2004 Topps Mike Scioscia card comes to mind), I'm going to give credit for the recent arrival of the trophy on cardboard to one particularly memorable card. 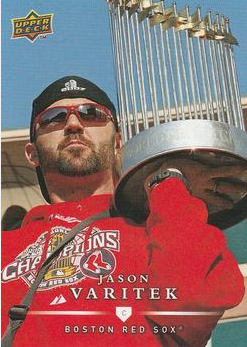 This 2008 Upper Deck card (this is actually the First Edition card) may not seem like much now, but it was displayed all over the blogs that year. It was so notable because seeing something like this on cards was pretty rare.
I honestly couldn't tell you when a player with the trophy appeared on a card prior to 2000. I'm sure I'm missing plenty of examples but it's not like you can run a search for that. I do know that even the 1972 Topps set, which has an entire subset of award trophies, does not include the World Series trophy in that group.
Fortunately, there is a Mother's Cookies set that recognizes the Dodgers' 1988 championship with the trophy. 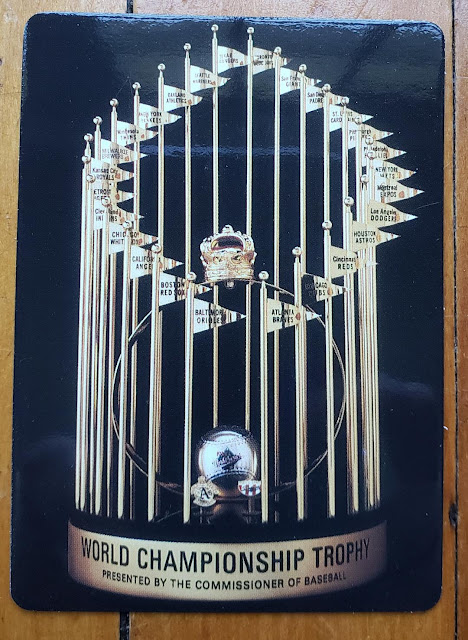 One of those collectors who has a mini-collection of trophies will have to fill me in on some other examples.
But I'm pretty certain I know which set showed off the trophy on the most cards. 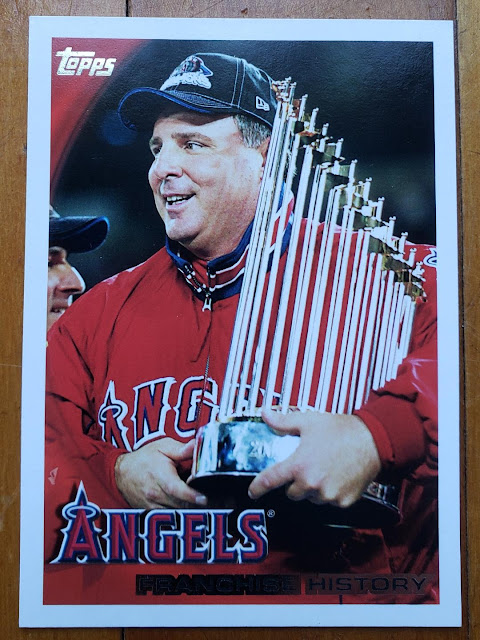 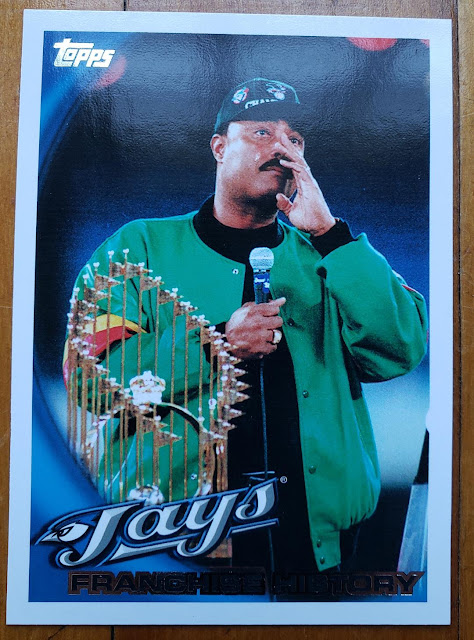 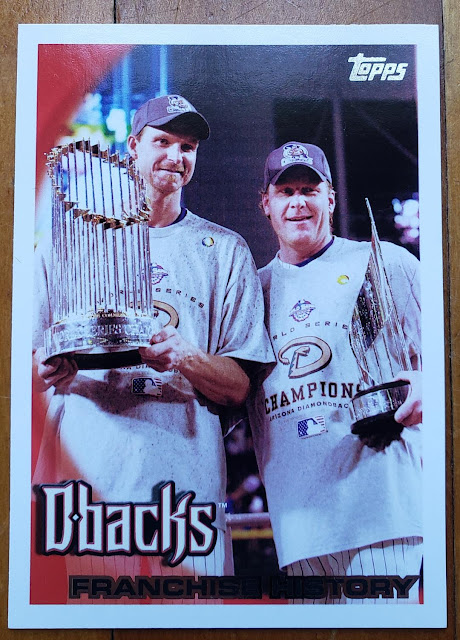 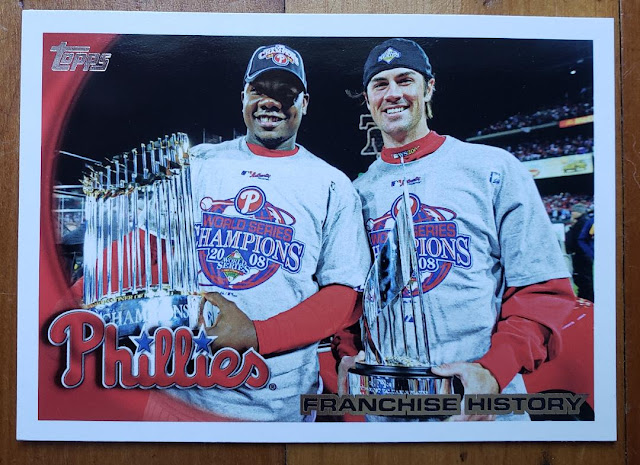 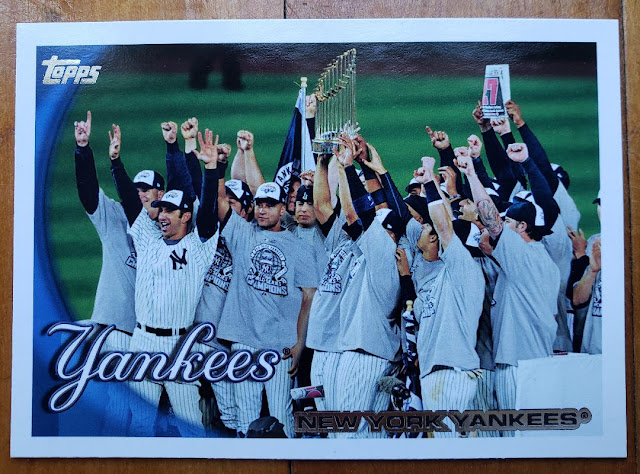 It's got to be 2010 Topps. Those "Franchise History" cards were great. 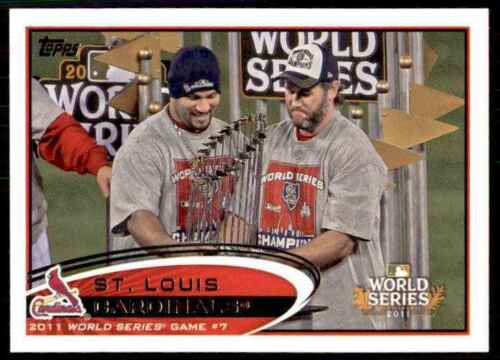 Here's another one from the 2012 Cardinals team set for their 2011 championship.
So, as you can see, fans of several teams have enjoyed reliving the thrill of seeing their team clutching the championship trophy in recent years. It's a trophy tradition that I like and wish it was around when I was collecting cards as a kid.
Looking forward to 2022 Stadium Club when a Dodger shows up on a card holding aloft the Commissioner's Trophy! ... Crossing my fingers it's not a short-print.

Fuji said…
Looking forward to 2022 Stadium Club when a Dodger shows up on a card watching an Oakland Athletic holding aloft the Commissioner's Trophy!
August 3, 2021 at 3:47 PM