My first championship as a fan 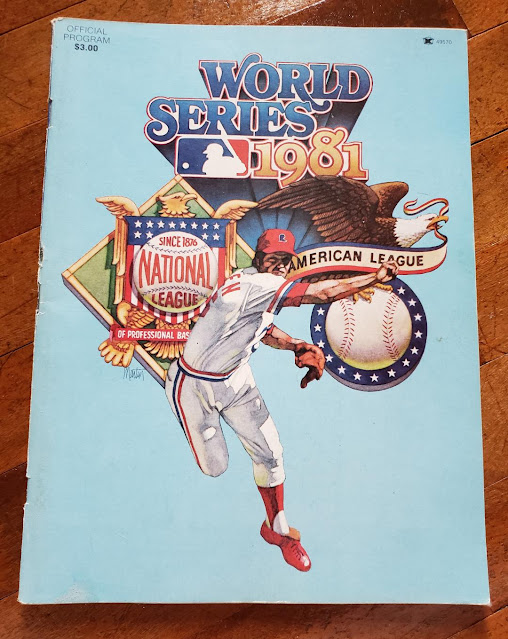 I've said a time or two that I have no regrets when it comes to removing cards from my collection. Whether I trade them, sell them, whatever, it was what I meant to do at the time, and I won't use hind-sight to beat myself up over what is a hobby.
However, I do have one regret when it comes to collecting. I was reminded of it just last night when Collecting Cutch posted about collecting newspaper clippings.
I don't have any newspaper clippings in my collection. That's a bit embarrassing to say for someone who has been in the newspaper business for almost 35 years. I do have an accumulation of newspapers in my home that I have saved, but that's for professional reasons, a habit I picked up when I was building my resume and thinking about moving on (it never happened). Fortunately one of those papers is the Dodgers' clinching game of last year's World Series.
But I did once accumulate newspaper clippings. I put together scrapbooks of the entire major league baseball season, from January through October. The first one was for the 1981 season, the second for 1982.
The scrapbooks were wide, heavy-duty, spiral-bound versions that you'd find in an art supply store. I would dutifully cut out any notable baseball clipping from the newspaper (I was a paper carrier at the time, so I had the access) and scotch-taped them (scotch-tape looped in the back, of course) under the corresponding month. Transactions, big games, big moments, they were all in there and presented pretty well, I might add, for a 15-year-old. I remember taping the article that captured Rickey Henderson's record-setting stolen base in the 1982 scrapbook.
I would also supply captions for some of the articles and photos. I kept those two spiral-bound yearbooks for years, up in the attic of my folks' home and then in my attic.
Then, one day, I looked at both of them ... and tossed them out.
I don't really know why. It was probably me looking at my teenaged self and cringing, the way people can't look at photos of themselves from those awkward years. But I sure do wish I still had them now. At the very least, they would've made an interesting blog post.
It would be especially appropriate this year. 2021 is the 40th anniversary of the 1981 season and everything that happened that year: Dave Winfield's signing with the Yankees, Fernandomania, the strike and the split season and, of course, the Dodgers' World Series championship.
This was the first championship for my favorite team that I ever experienced. A couple of months into my 16th birthday, the Dodgers won the ultimate trophy in sports in my eyes.
At this very moment in the calendar, 40 years ago, we were waiting for the baseball season to return. The strike had ended, the season had been split in two (sorry, Reds and Cardinals fans) and the All-Star Game that would kick off the second half was four days away.
So, if I don't have any clippings from that year and that World Series moment, what do I have? 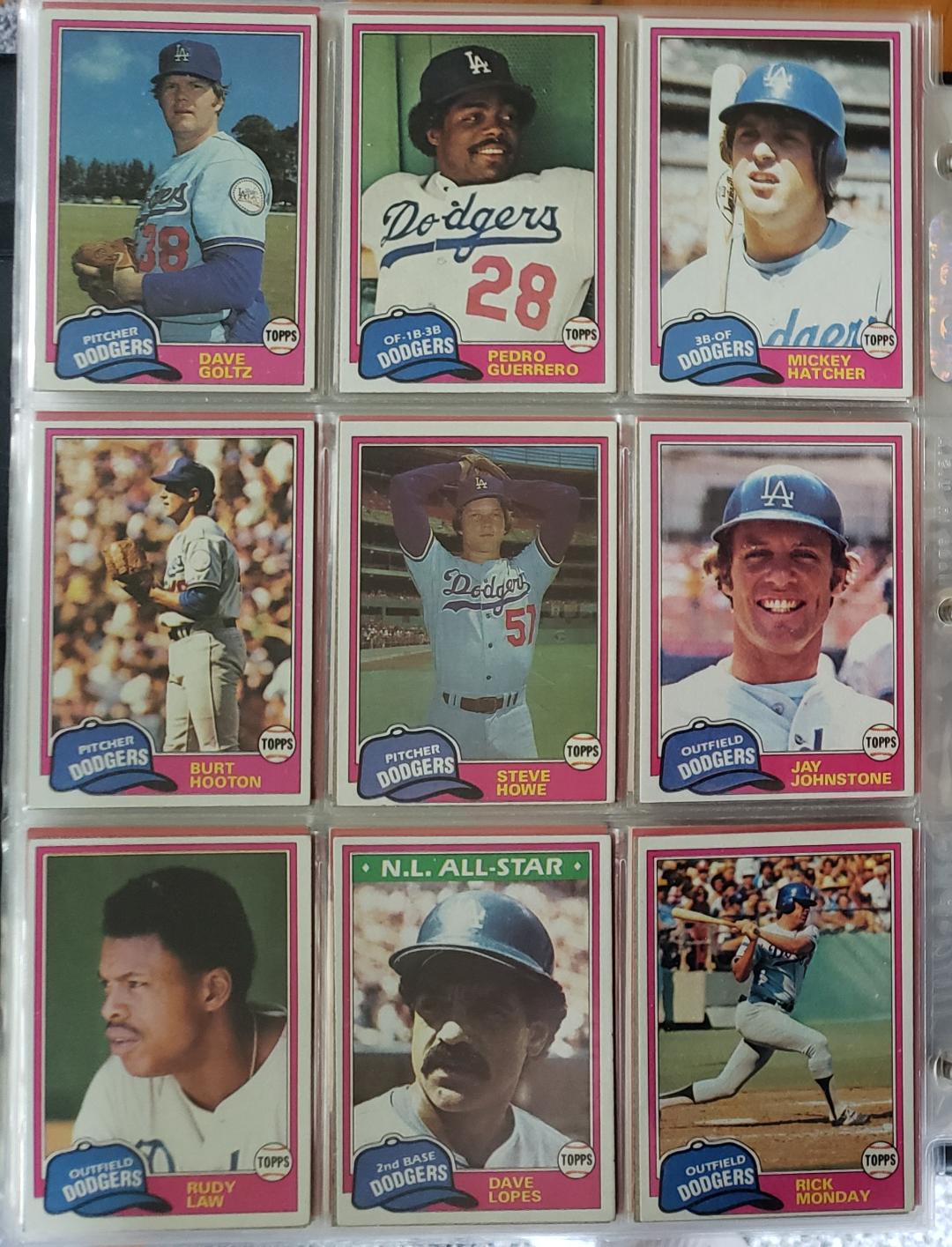 Mostly cards. I have mostly card memories of that 1981 season. Fortunately, three card companies were available to me starting in '81 instead of just one. So I could accumulate more than one company's version of that championship team. 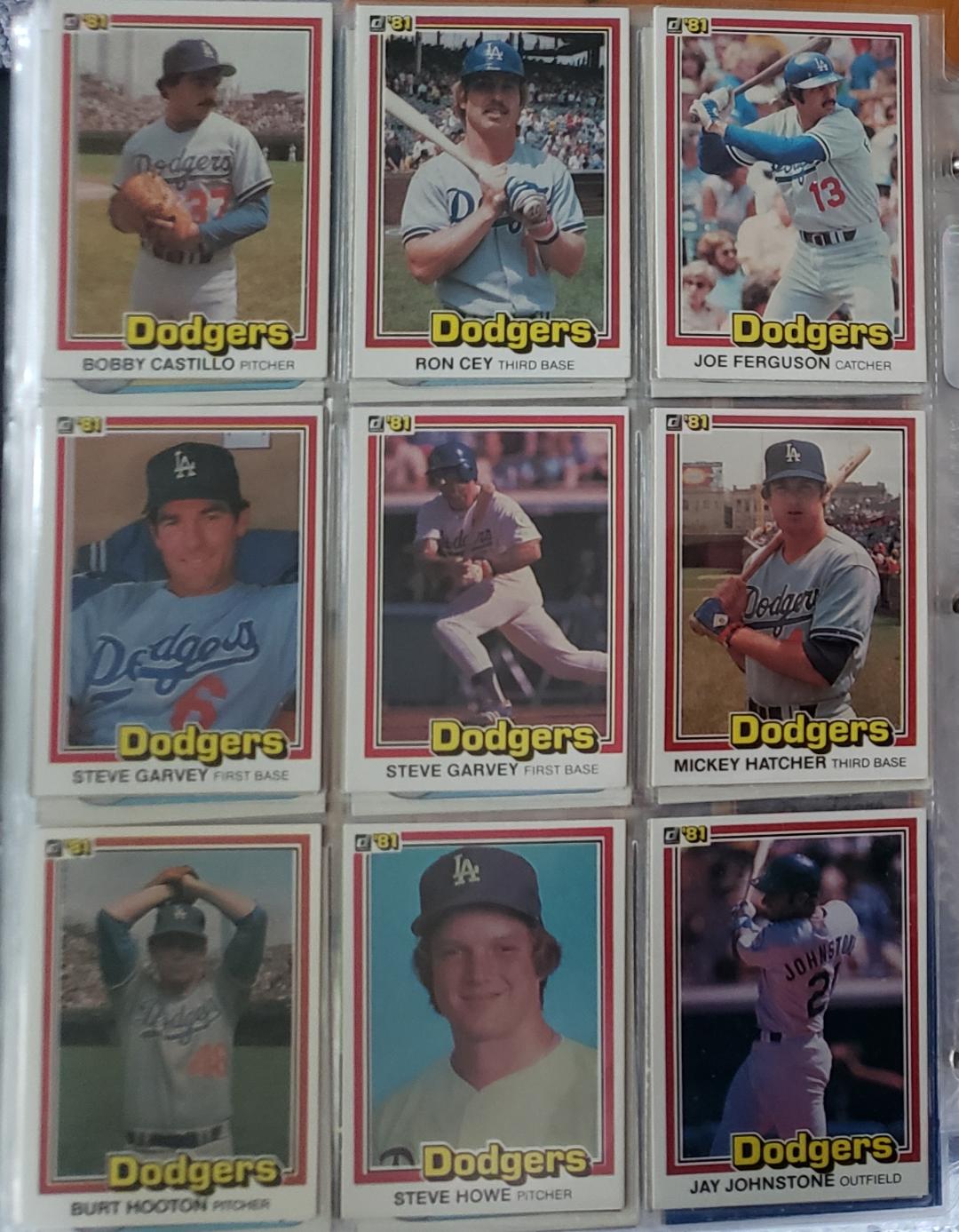 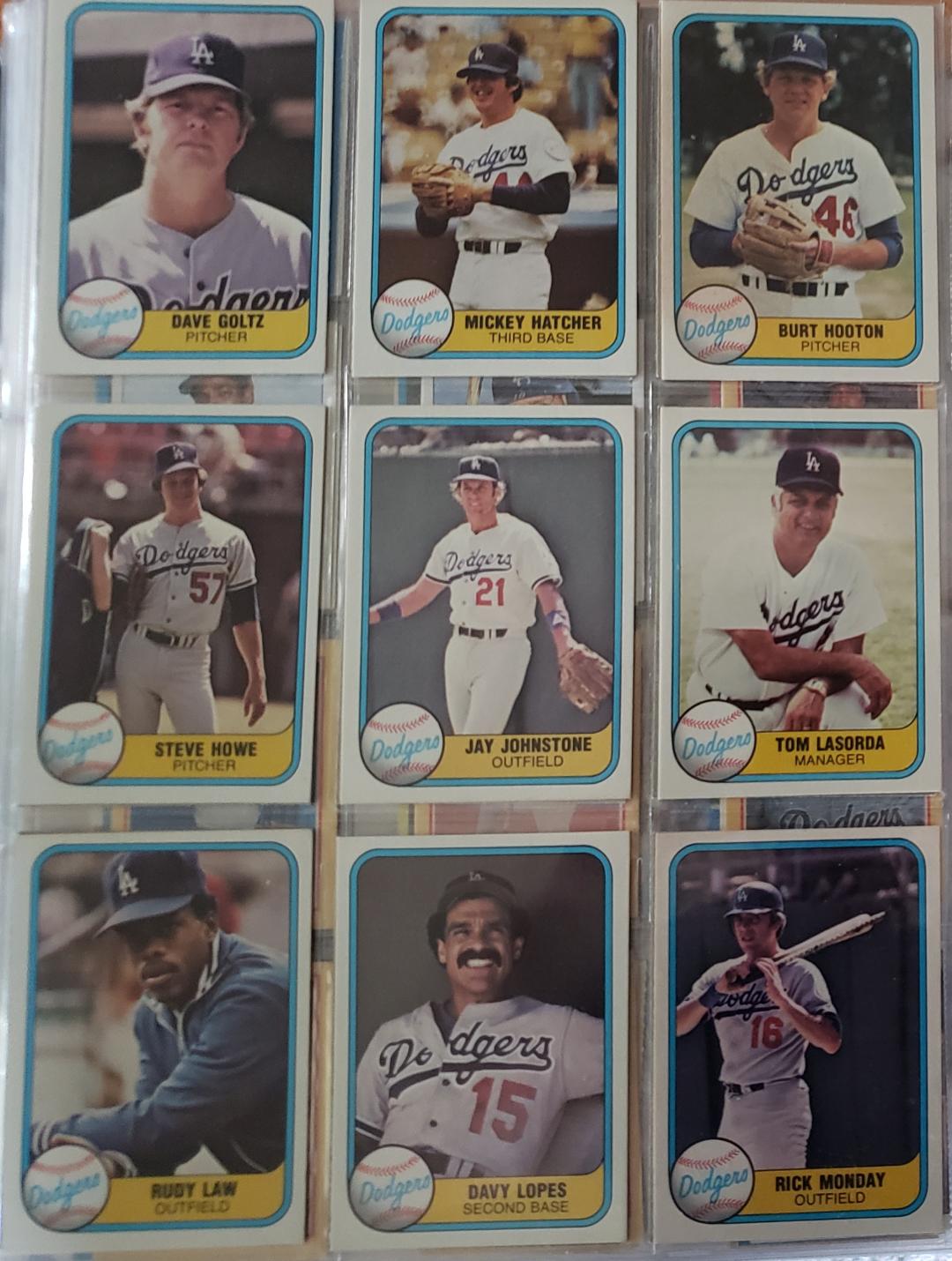 Donruss and Fleer (with some stickers peaking through).

I've shown all those cards before, many times. The rest of what I have from 1981 are periodicals. 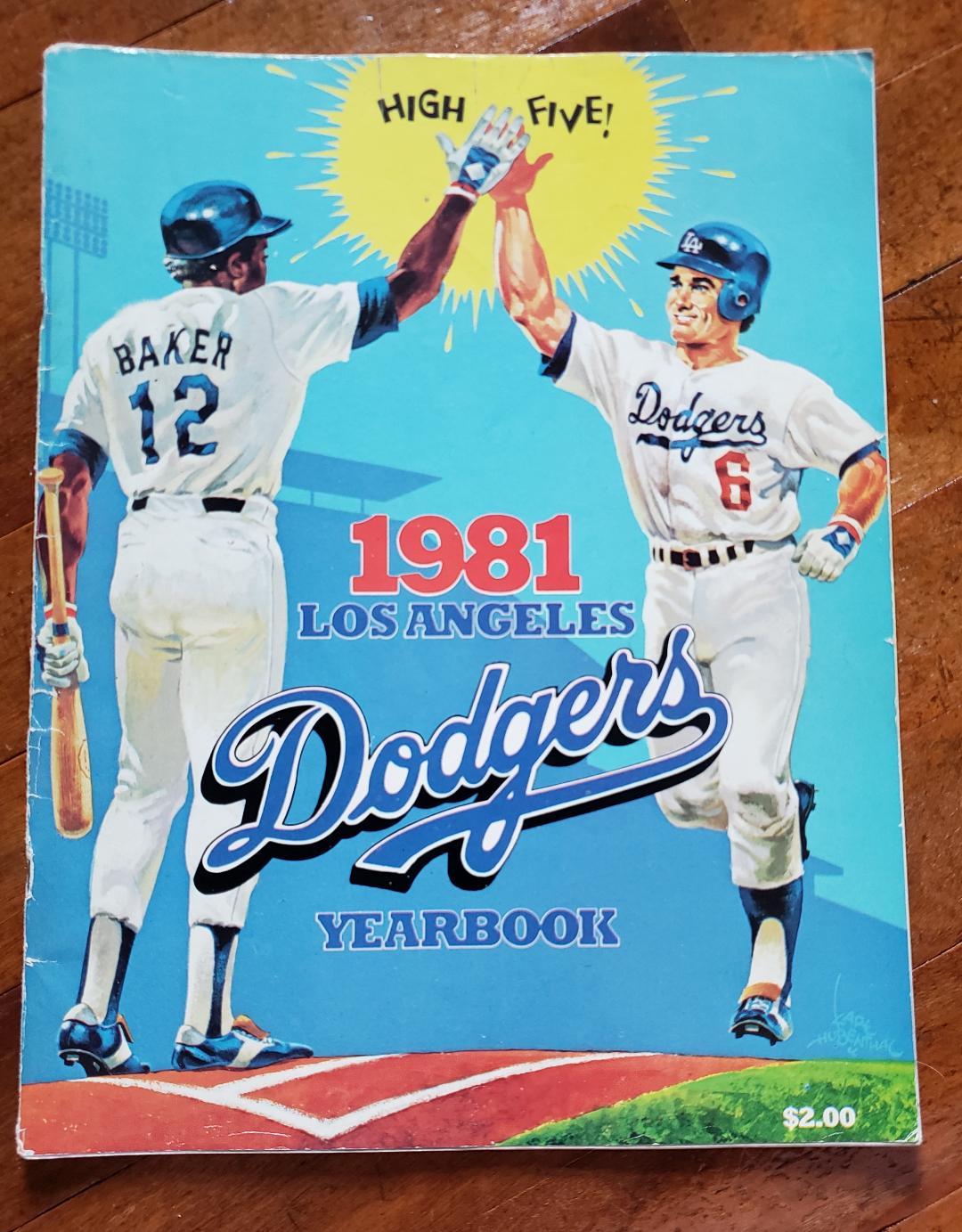 The 1981 yearbook, which had no idea of what was to come. 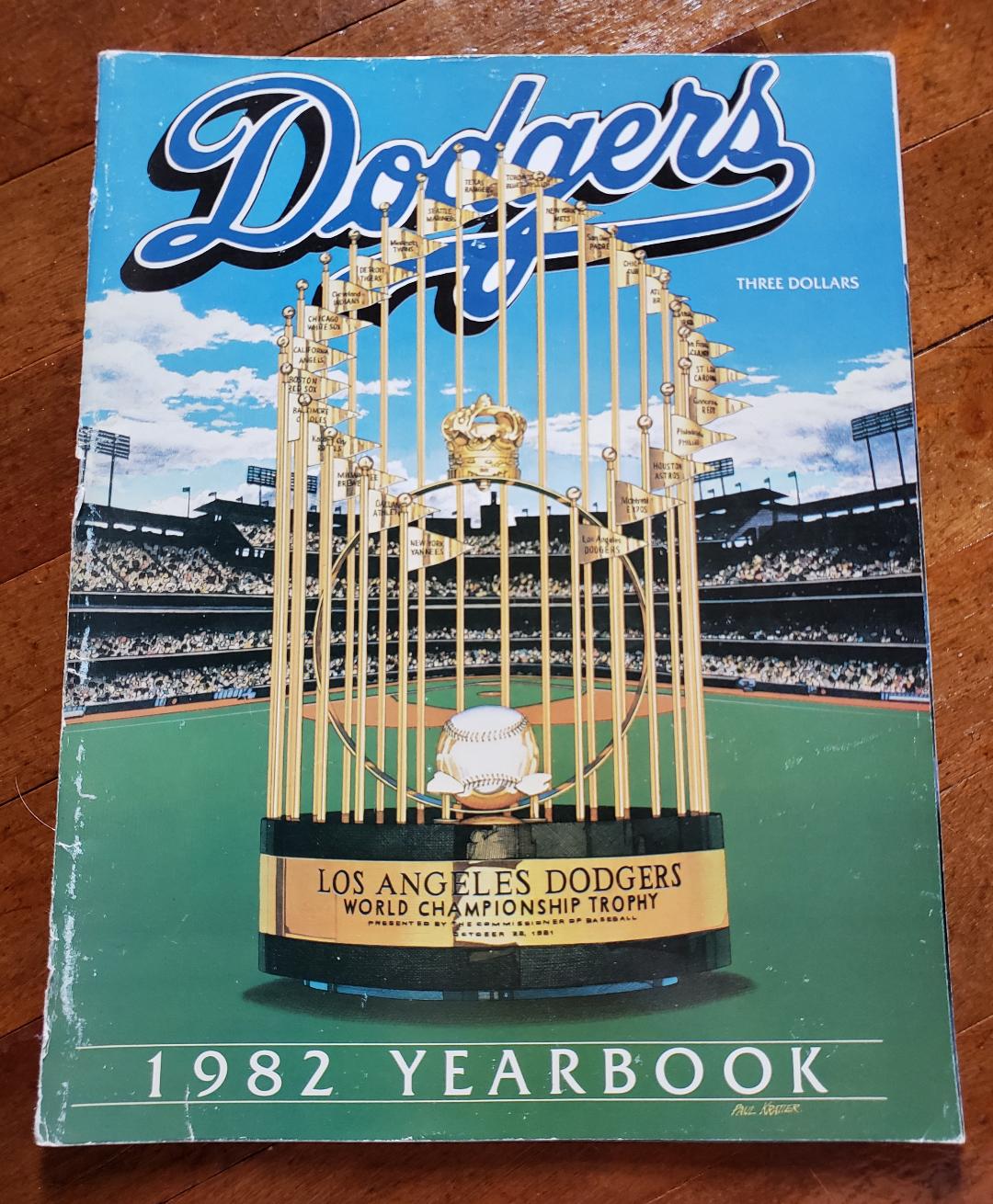 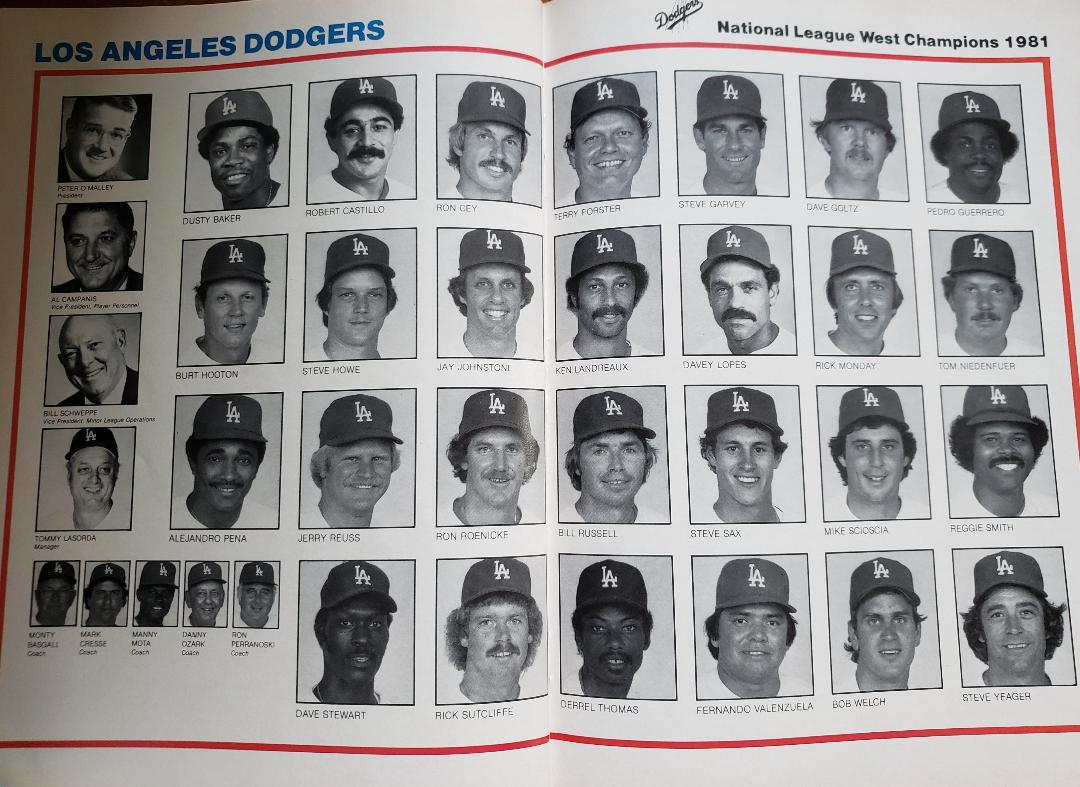 The 1981 World Series program, which is at the top of the post, displayed those familiar mug shots of the entire team, which was a staple of the '70s and early '80s (it did so for all of the playoff-eligible teams). It's not fair that someone named Bill Schweppe gets a bigger photo than the entire coaching staff.
The best chronicler of the Dodgers' 1981 season in my collection, though, is a book, which I've probably shown before. 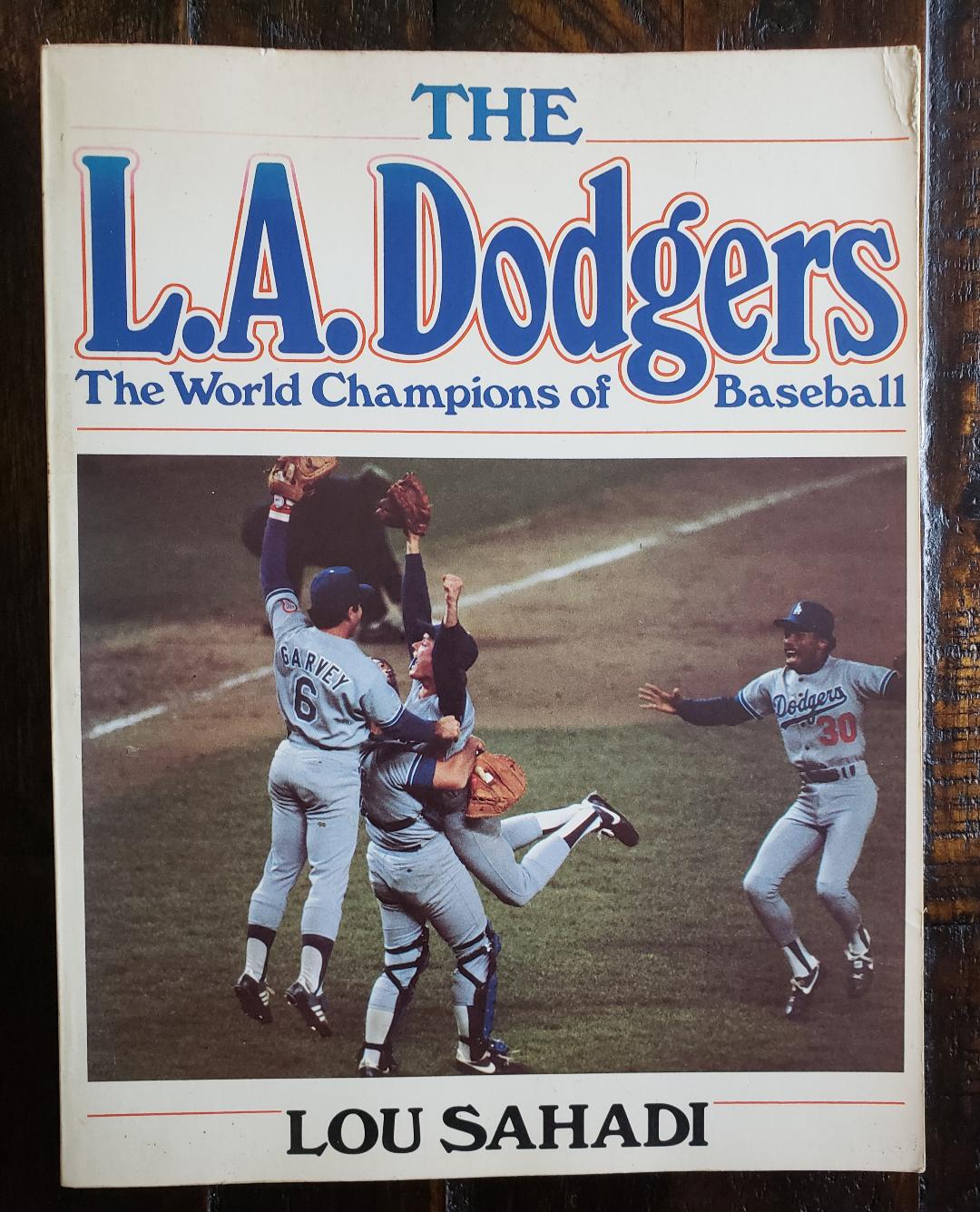 This book is as thorough as it got at the time. It breaks down every element of the Dodgers' season, from profiles on the top individuals (Peter O'Malley, Tom Lasorda, Fernando Valenzuela, etc.) to a detailed rundown of the Dodgers' season and each of the three postseason series (Astros, Expos and Yankees) with linescores for every game.
The best part are the photographs, mostly black and white, but taken from daily professional photographers who captured individual Dodgers games and events throughout the season. 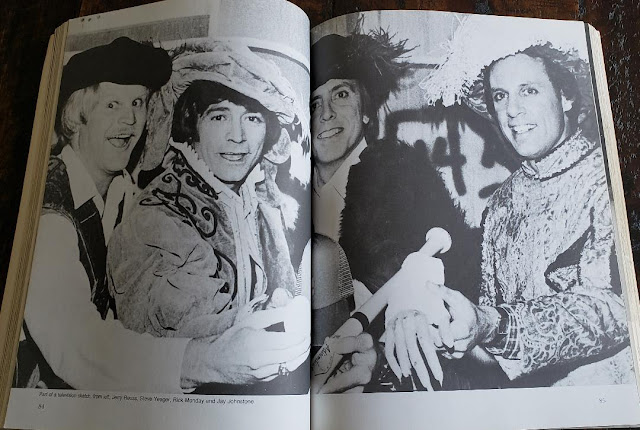 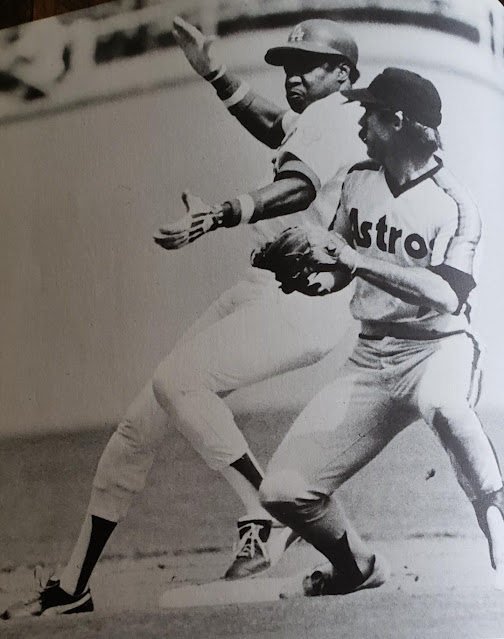 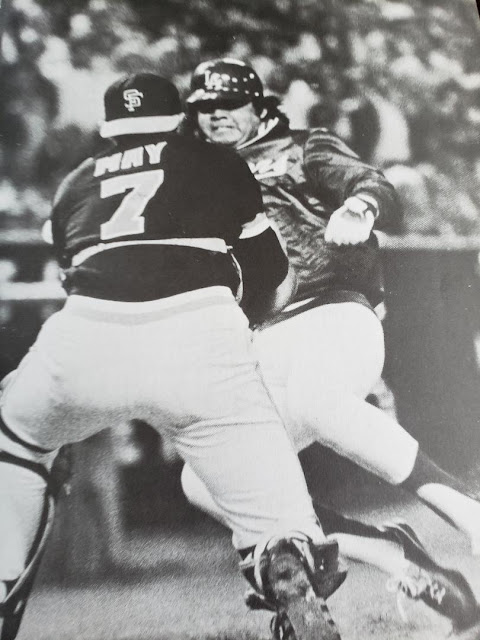 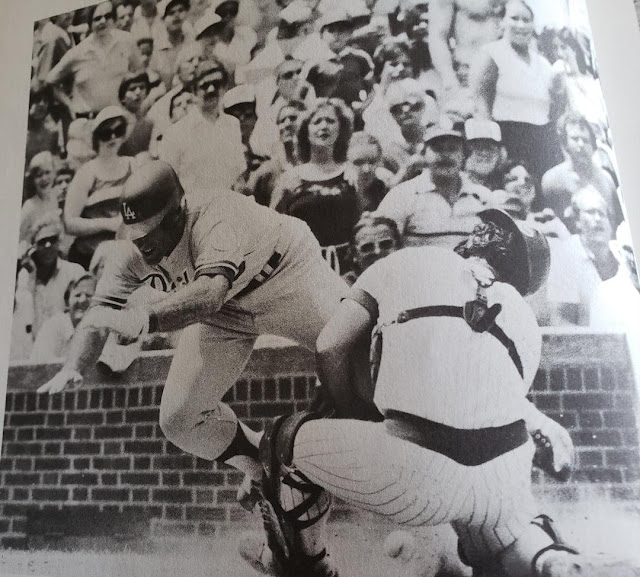 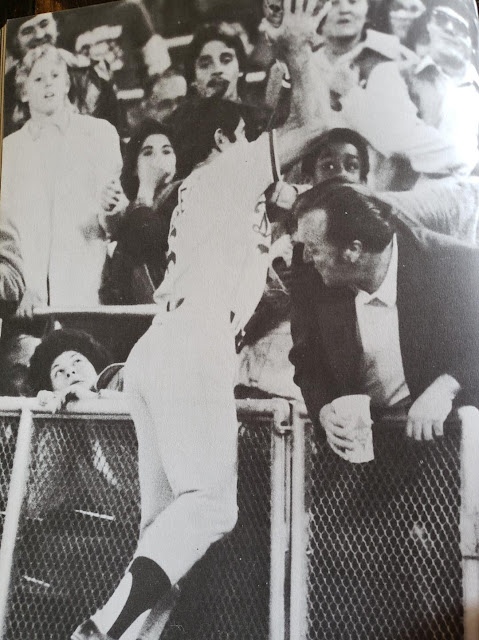 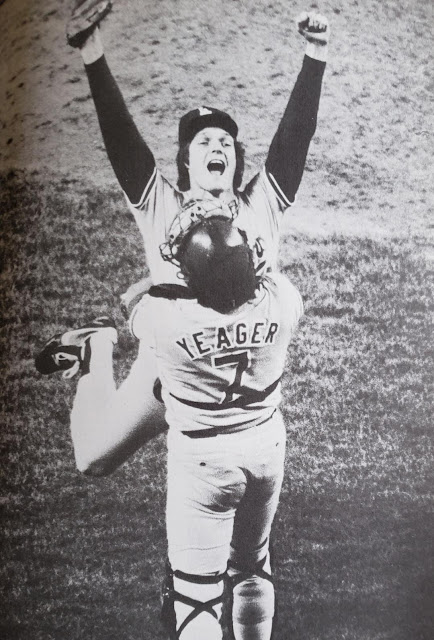 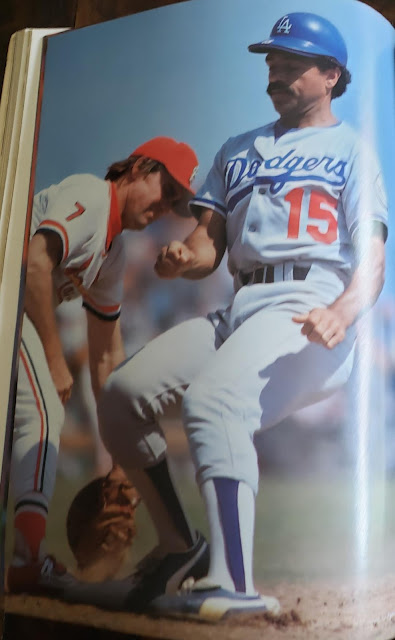 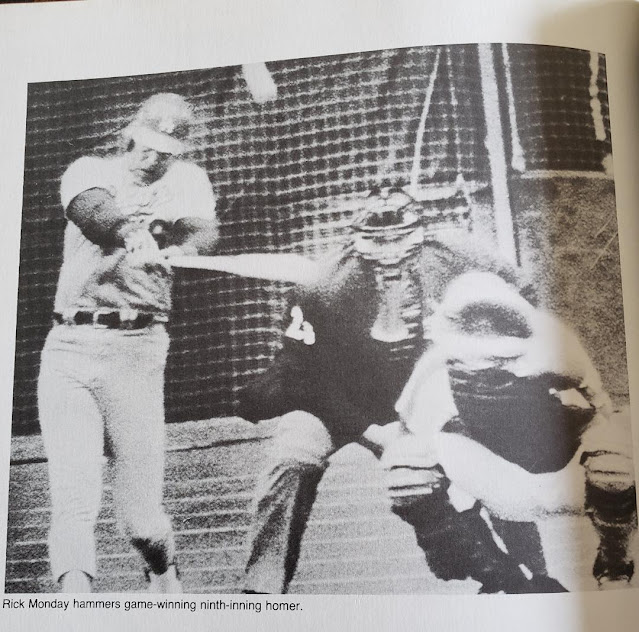 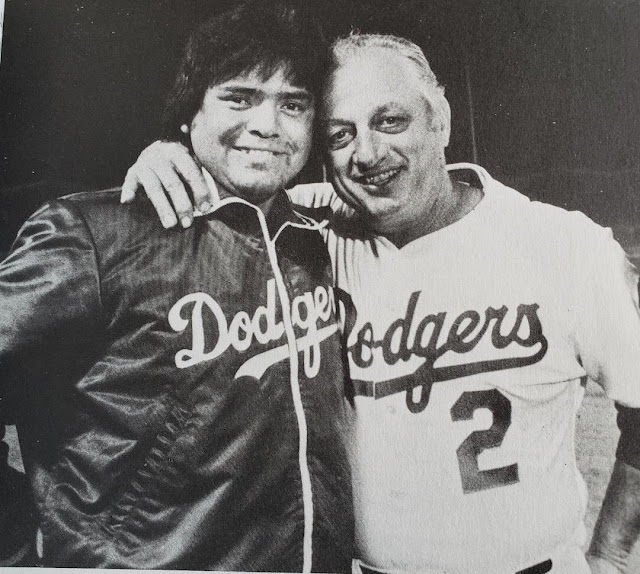 Thanks to that book and those photos, I probably am not missing a whole lot from the 1981 scrapbook that I threw out -- at least when it comes to the Dodgers' postseason part.
I have mentioned that when the Dodgers won the World Series -- over the Yankees -- I went to school the next day and gloated a bit to some of the more vocal Yankees fans in my 11th grade class. They stared at me blankly, not used to someone that they were so used to dismissing giving them abuse.
But that's the way it is as a fan. To this day, I still have to hear about how 1981 wasn't a "real championship," just like I have to do about 2020. Granted, I consider the source of these negative thoughts -- almost always fans of the Dodgers' rivals.
But those who grew up watching the Dodgers know that every team was trying for the same title that season and the Dodgers' moments were better than any other team's moments. I will remember all of those moments -- Cey's blasts, Reuss' pitching, Johnstone's timely hitting, Guerrero's epic Game 6, Fernando battling like Ferando did -- for the rest of my life.
It's a gift that I can be on this earth 40 years later and remember all of that.
Sure wish I still had those clippings taped into that scrapbook though.

Old Cards said…
If it is any comfort, I think you kept the right things. The cards and yearbooks are much better than newspaper clippings. I kept a scrapbook of the All-Star games for several years. I still have them, but considered throwing them away. Wished I had bought the All-Star programs.
August 5, 2021 at 7:15 PM

Johnnys Trading Spot said…
You take what you can get :). Memories are the most important anyways (sounds like you still have those). :)
August 5, 2021 at 9:23 PM

Nick said…
That Reuss/Yeager/Monday/Johnstone yearbook photo is by far the best thing I'm gonna see on the blogs today!
August 5, 2021 at 10:16 PM

Jon said…
I tossed a scrapbook during my late teens that I had put together as a child, for basically the same reason, I was embarrassed by it. Twenty plus years later, I wish I wouldn't have, as I wouldn't be embarrassed by it now. It probably had stuff in it too from events that I've completely forgotten by now, and it would've been nice to have such a thing around, if only to help retain those forgotten memories.
August 6, 2021 at 8:41 AM

Fuji said…
I used to save newspaper clippings (mostly photographs) and keep them in a photo album. I have no idea if I threw it out, sold it at a garage sale, or donated it to Goodwill. Last time I saw it was probably back in high school (late 80's). I'm pretty sure there were a fair share of Rickey Henderson photographs. Maybe even one from his record setting stolen base in 1982.
August 6, 2021 at 10:11 AM

Adam said…
I was too young to remember the Reds last World Championship (1990) and I hadn’t started watching baseball yet either. The Reds team that stands out for me as a kid is 1995 where they made it all the way to the NLCS but got swept by the Braves. That was such a fun team!
August 6, 2021 at 1:27 PM