OK, so it's actually not a card I didn't do very well.

So if you see my posts dwindle down to once a week near the end of June, you'll know why.

A few posts ago, I mentioned that I purchased a 1977 Topps Venezuelan card after an emailed head's up from a blog reader, Mike. I was so excited to come across a Cey card that I didn't have that I ordered the card directly through my email on my phone, without bothering to change the name notation.

That explains why an envelope from someone I had never communicated with before came addressed to "Night Owl". I wonder if the seller thought, "what's up with this guy?"

When the card arrived, I knew right away that it wasn't a card.

It was a sticker. 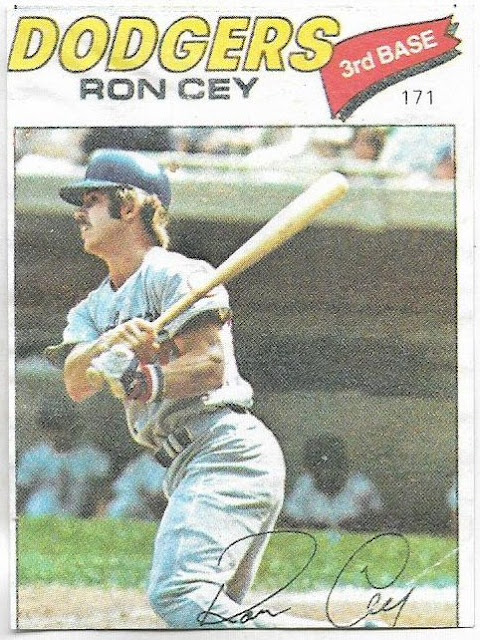 That's it right there. You can see the differences between the Venezuelan sticker and the actually 1977 Topps card. The Cey sticker doesn't have a bottom border. It also lists the set number -- 171 -- on the front of the sticker.

There's another difference, too: 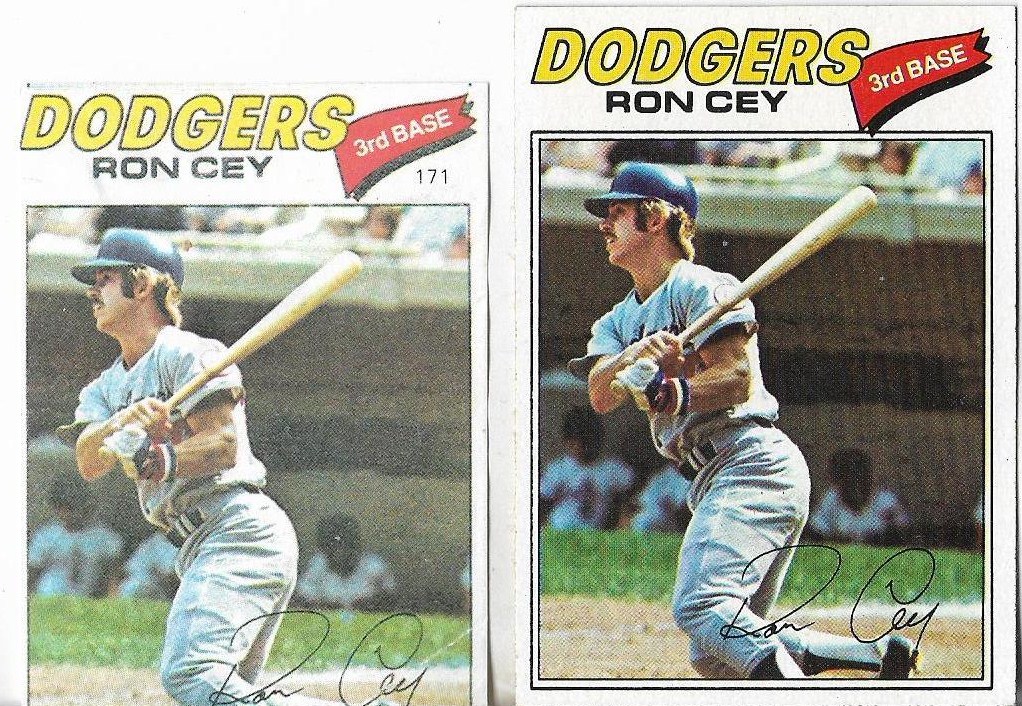 The sticker is much shorter than the American Topps card.

It turns out that Venezuelan cards were a thing until about 1972 and then much of the cards were replaced by stickers during the 1970s.

The sticker itself is paper-thin, quite flimsy.

The back is blank, because, duh, it's a sticker.

Apparently sticker albums were available and the spots where the stickers were to be stuck contained text about the individual player. The stickers were glued on the back at only the top, so once the sticker was stuck, the collector could lift up the sticker from the bottom and read the text.

It's not a card, but it's quite the novelty item and I'm thrilled to own it.

And you better believe I'll be adding it to my list of Ron Cey CARDS.

Collecting Cutch said…
It amazes me that things like this survived for over 40 years. Very cool novelty item.
June 4, 2020 at 10:16 PM

Fuji said…
I've never heard of or seen one of these Venezuelan stickers before. Very interesting stuff. Also very interested in seeing these changes to Blogger. I've never been a huge fan of change.
June 5, 2020 at 9:29 AM

GCA said…
Wow, the Ven cards are scarce enough, and there are stickers too?

I caved and swapped over to the new Blogger version too. It's OK, but was frustrating learning the new editing interface. Seems like they removed more than they improved. You can't load all your pictures for a post at once. The drag 'em here interface is useless to me. And I don't like that I can't just click on the number and see the comments at the end of the published post. Now you have to view and scroll down manually. And the "phone view" is irrelevant to reality as well. Rant over.
June 5, 2020 at 10:48 AM

I'm not a big fan of the new Blogger interface either, but a lot of bloggers have been sending feedback (myself included), and hopefully the folks in charge will make some tweaks for us.
June 5, 2020 at 2:02 PM

AdamE said…
My first Virdon Venezuelan was a 1972 Sticker. The design was nothing like a 1972 Topps so I had no idea what it was. Luckily Cardboard Junkie knew what it was right away.
June 8, 2020 at 7:12 PM

Shlabotnik Report said…
One other interesting change to the stickers... 1977 Topps has a black box around the photo, some white space and then an "outer box" which also runs through the drop shadow behind the position pennant. For some reason - maybe because of the bottom of the card/sticker being missing - they removed that outer box... but with mixed results, as you can see by looking closely at the bottom of the pennant.