Rumors of (fill in the blank)'s death have been exaggerated 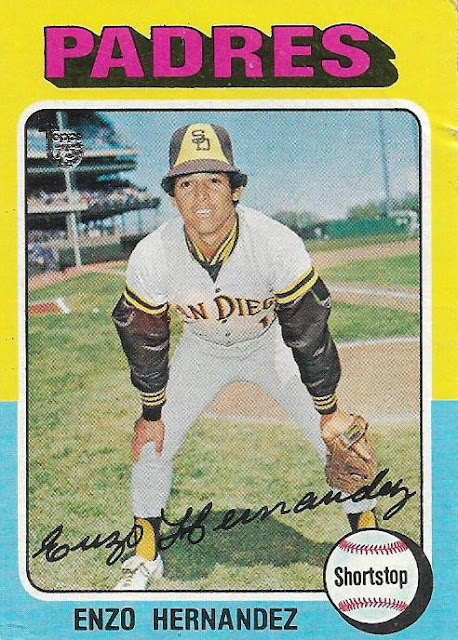 I don't know why, but it's definitely a thing.

Yesterday, all over Twitter folks were declaring (screaming, basically) that the 2020 MLB season was dead. Baseball players themselves were saying it was dead.

OK, it's not doing well. People are coming into its room to take its temperature at all hours of the day and night. The coroner is on speed dial. But it's not dead. Stop saying that it's dead. This isn't a contest. When and if it's actually dead everyone will know.

(And really, in a year like this, would the lack of a baseball season be all that horrible?)

What is more likely dead is labor peace in baseball. Yup, that's dead. Enjoy whatever 40 games you get to see this year, because who knows when there will be more.

The people in the hobby who labeled blogging dead should know better. How do they feel when the media considers card collecting dead or dying? A lot of them get mad when they read yet another media report about the decline of card collecting. As they should (none of those articles are being written now, of course, as card collecting is as popular as it's been in over 25 years. Funny how so many things rise from the dead).

During the initial stages of the coronavirus outbreak, trading through the mail dwindled to almost nothing. I didn't go to the post office for two months. I tried to keep trading's heartbeat going by sending out a PWE every other week or so.

Some may have thought that trading through the blogs was dead or dying. On top of that, people were declaring the post office dead, too. Well, isn't that a double-whammy for trading? How are we going to overcome all THAT?

But like with most things, I chose to ride it out and see it through to the other side.

I wouldn't consider blog trading on the level as it was in, say 2010, but I think it's come back a bit from its April low.

Just today, I sent out three more envelopes of winnings from my contest. Last week I sent three as well. I have two others packaged up ready to send later this week. And then I hope to send out the remaining four next week. Meanwhile, I sent out a couple of "just because" card envelopes in that group, and there will be others in future weeks.

I wouldn't consider that dead or dying. 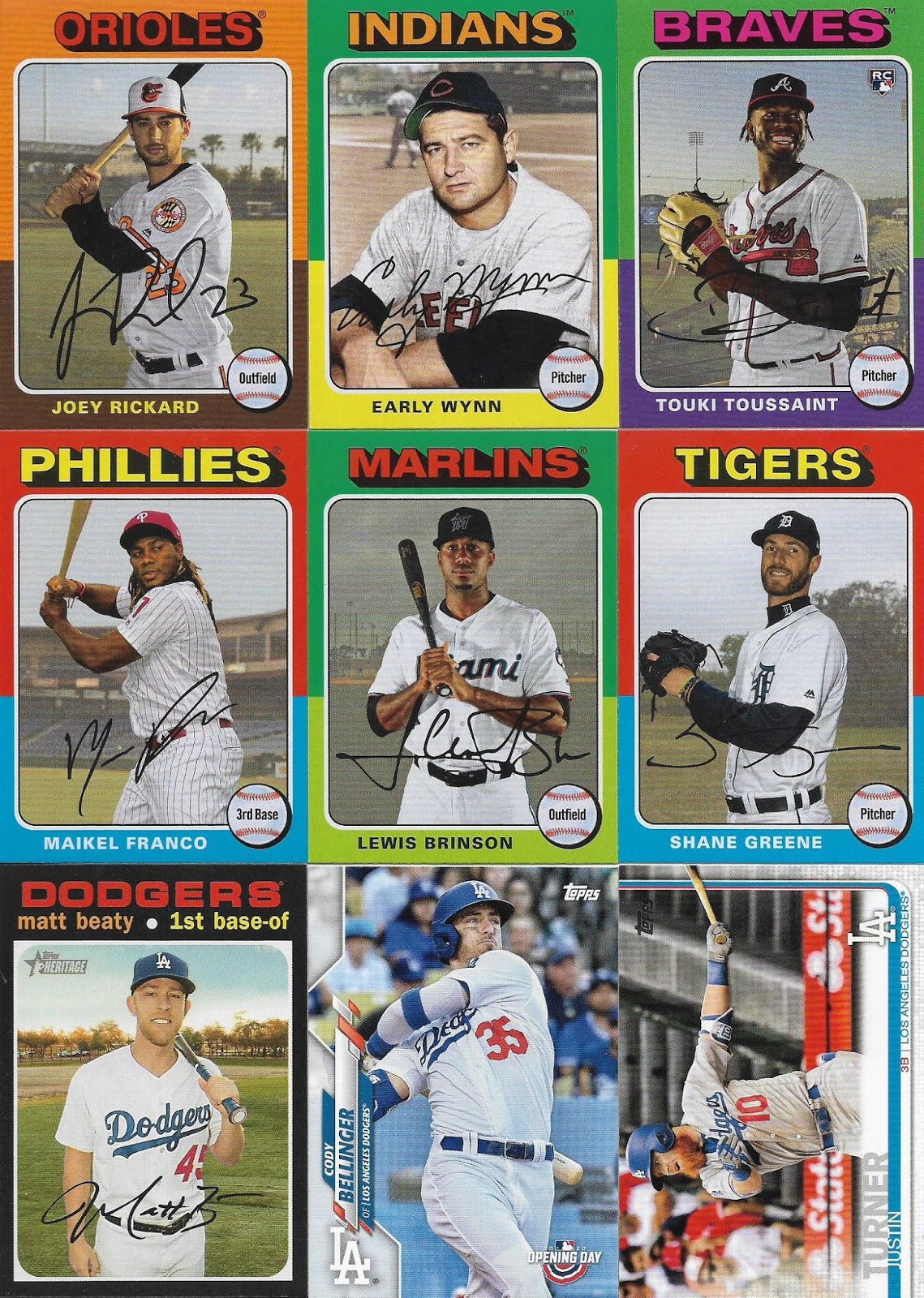 That's an envelope of cards I received recently from Rod of Padrographs.

OK, I have all these (and the Enzo Hernandez buyback that he sent, too), but there is a lot of efforting going on! I probably can make use of many of these. I have half a mind to start a mini "cars in the background" collection with all the cars popping up in Dodgers Heritage cards this year. 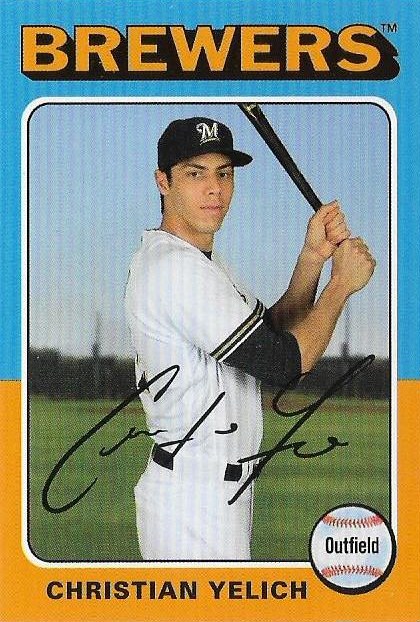 Rod also sent me just the second 2019 Archives '75 mini in my collection.

Of course, you can't tell it's a mini when I show it like that. 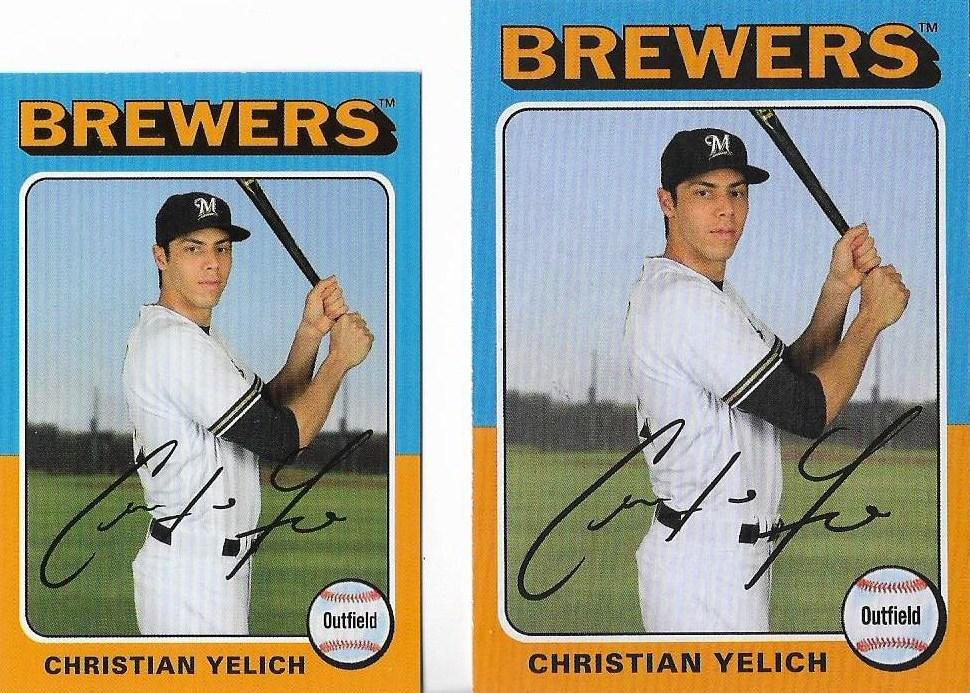 I decided a while ago that I wouldn't be collecting these because Topps made them too difficult to acquire. But I'll certainly accept any. 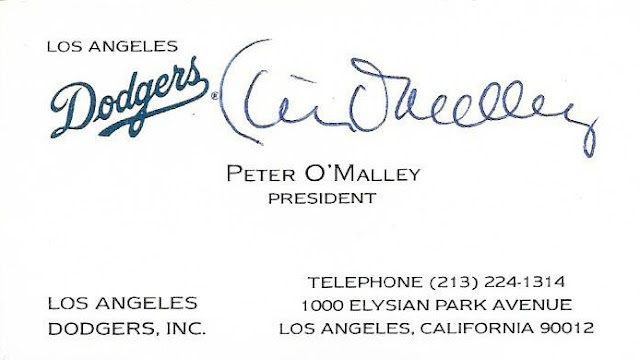 This is the prize of the envelope. It's a signed business card from former Dodgers president Peter O'Malley!

Peter O'Malley is the first team president that I ever knew. I always saw his friendly face in Dodgers yearbooks. This is a nice keepsake from that time. 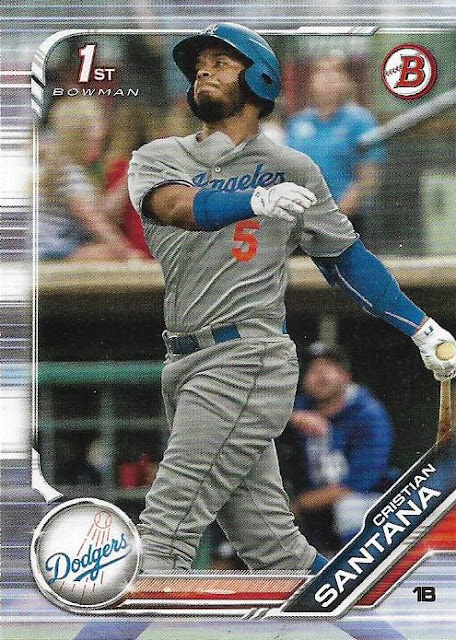 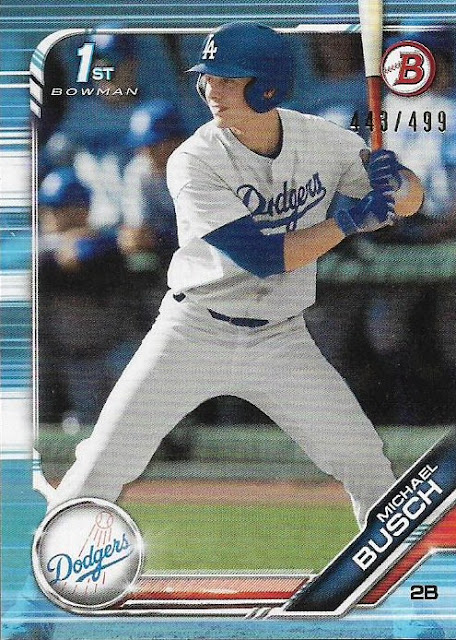 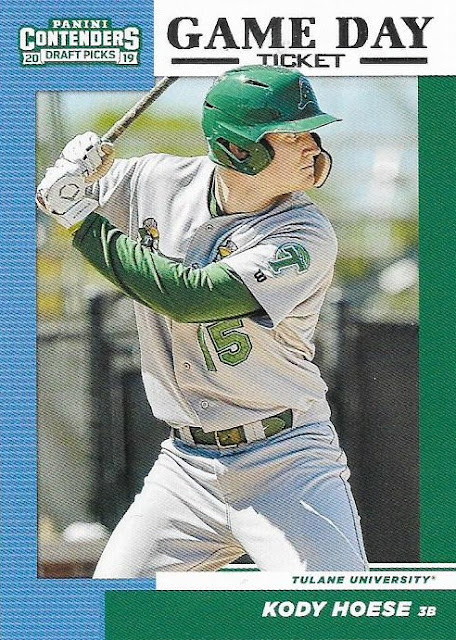 I've moved on to a different recent envelope that I found in my mail box. This one is another Zippy Zapping from Torren' Up Cards.

A selection of prospect cards is a tell-tale sign it's a gift from Kenny. He said he forgot to send these when he shipped me the Dustin May Utz card. Although green is not a Dodger color at all, I think the Panini Kody Hoese card is quite handsome. 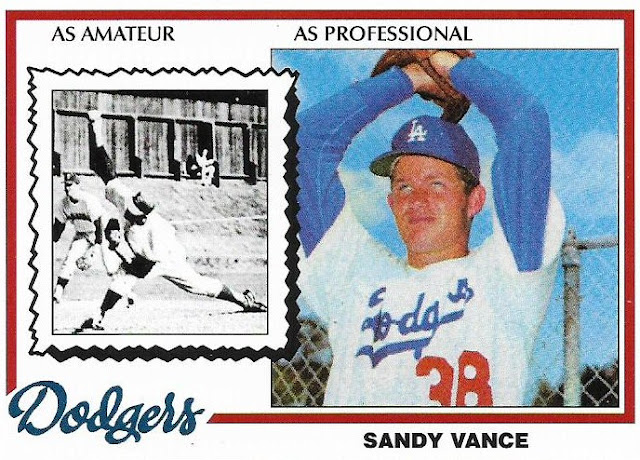 What? I'm still receiving other envelopes in the mail?

Yes, this card is from Nick from njwv.

He's one of many custom-card makers. He enjoys making cards of players who went to Stanford University. I appreciate his selection of the 1978 Topps managers design for his customs. I have consider the '78 managers design one of the greatest designs that Topps has ever developed. I loved those manager cards the instant I saw them and I was 12 at the time. 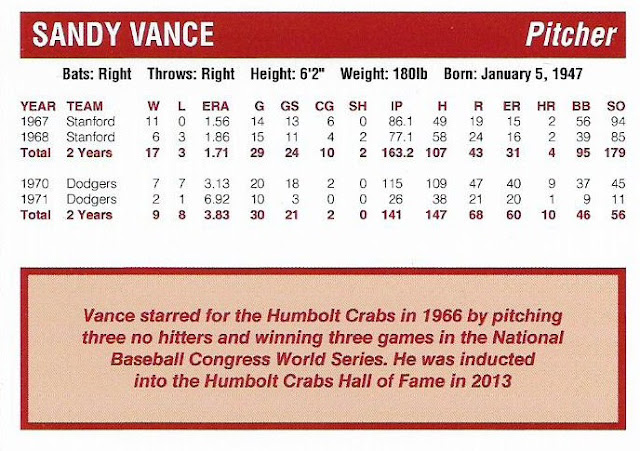 Nick's custom card backs are wonderful. Easy to read, informative. Everything that you'd want in a card back except for the cartoon. Maybe a cartoon Humbolt Crab would work here. (Oh, click on the link, it's not going to kill ya). 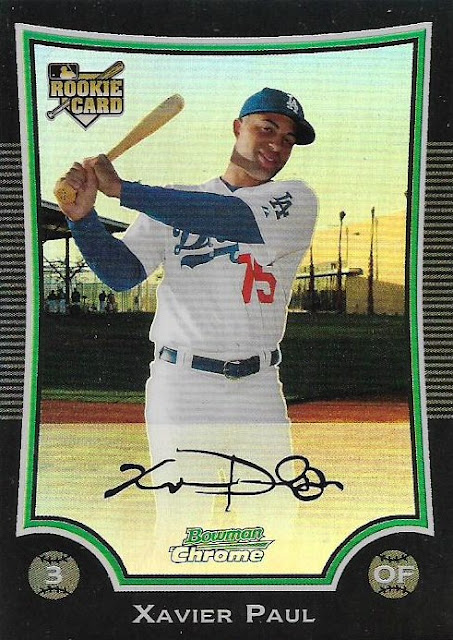 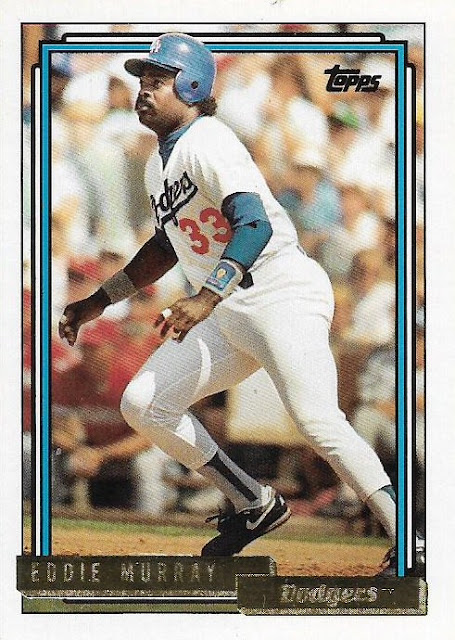 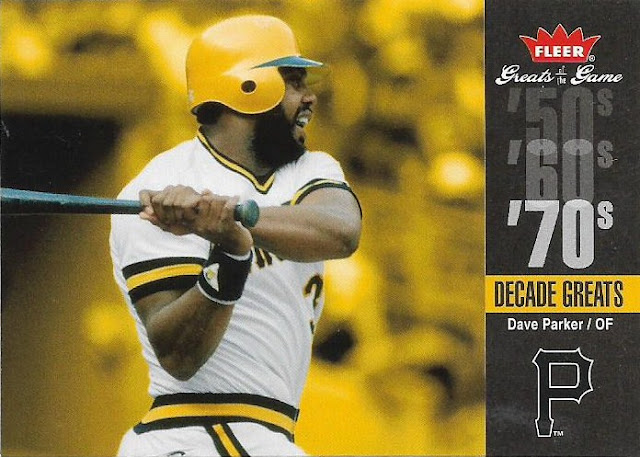 Finally, here are three more cards that I nabbed from The Diamond King's Diamond Nine giveaway.

The two Dodger cards I grabbed rather effortlessly. While everyone else was zeroing on Griffeys or Legends, I knew both of those Dodgers were needs of mine and I casually took them with no trouble.

The excellently designed Parker I grabbed as fast as I could. I'm at a stage where I will take any card that features players from my childhood. Doesn't matter if I'm collecting the set or not. I want that card!

So, that was a lot of activity.

A lot of activity for:

An activity that's dead (trading and sending cards through the mail).

Maybe don't be in such a hurry to cross everything off your list.

Because sometimes that thing you declared dead so smugly will thrust a bloody arm out of the grave and GRAB YOU.

Zippy Zappy said…
Maybe if the collecting hobby was actually dead the powers at be would finally lower the prices on the packs/boxes/cards.

Nachos Grande said…
Trading is definitely alive and well right now which is awesome. Free card giveaways are all over the blogs (and like you said, blogs are making a comeback). Readership on my blog has been up lately, I assume that's true for most of us. It's not all doom and gloom yet!
June 16, 2020 at 9:48 PM

Nick said…
You hit the nail on the head with everything in this post, but especially one thing you brought up early on -- at this point, do we even WANT a baseball season? That's the question I think too many people are missing. With everything else going on, baseball really doesn't seem all that important, and I certainly don't want to see a 48-game season with a "World Series" shoehorned in at the end of it. The owners/playerslabor strife in general worries me way more than the short-term goal of playing baseball in 2020.
June 17, 2020 at 1:02 AM

Billy Kingsley said…
I'm with you. People who say something's dead are usually the ones who don't like where something is so they try to whine loud enough that people believe them.
Intelligent people don't fall for that.

bbcardz said…
As much as I love the Dodgers, I'm really not all that enthused to see a very abbreviated 2020 baseball season, especially with the coronavirus trending upward again and very possibly shutting down sports a 2nd time.
June 17, 2020 at 5:46 AM

Big Tone said…
My mom killed off one of my dads closest friends once. She got the fake news and ran with it. Yeah, he was dead for about 5 minutes until my dad, In a panicked state, made the phone call confirming he was still alive and well. She gets confused about things like that sometimes.
June 17, 2020 at 6:52 AM

Fuji said…
Sweet O'Malley signed business card! By the way... I can bear witness to the fact that the post office is alive and kicking. I spent over 30 minutes at my local post office yesterday and when I arrived, there were at least 20 people in front of me. I couldn't even see the end of the line when I left. Hopefully that's the trend around the country. Long live the USPS!
June 17, 2020 at 9:32 AM

CaptKirk42 said…
Yeah Vinyl is DEAD! NO, NO It isn't. It was on life-support a few years back but thanks to night club DJs and some diehard collectors it is still kicking.
June 17, 2020 at 12:30 PM