I've decided that if I'm going to purchase one of these Project 2020 cards that it's going to be a Koufax or a Robinson. I don't care about the other players featured. But it has to be a card that appeals to me. The "art" has to appeal to me.

So far, nothing has. Not even the most recent two.

Collectors are amazed at how much these cards are going for on the secondary market. And, I admit, I've been astonished, too. Who wants to play $300 for THAT? And then we've been told that you can't look at it like a regular card. These are pieces of ART. The artists themselves (some of them are on the outer fringes of what I would consider artists) have fans and they pursue creations by those artists apparently far more fervently than card collectors do of the cards they want.

OK, so they're pieces of art, not just your "average baseball card."

And I'm saying, "All right, gotcha, now tell me what the hell is this?": 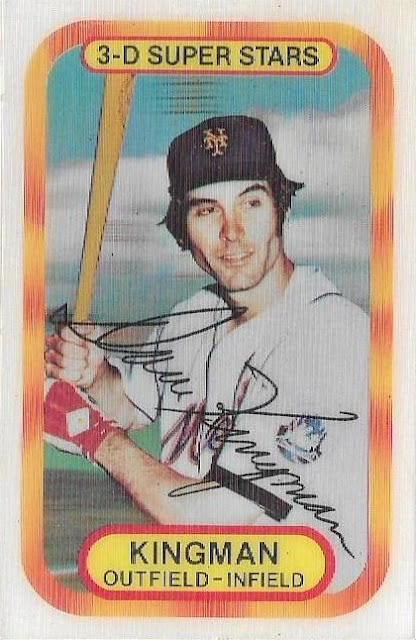 Someone had take an image of a player, blur the background behind him to create a "3-D" effect, place a piece of clear, ribbed plastic over the photo, produce a design that is so of its time that nobody could mistake it for any other decade, add a decade-specific color, too, use a border effect that causes the red stripes on the side to dance as you move the card, and, finally, list only the player's last name, which was completely wild for its time.

They even came out of the cereal box in a completely different size than your average Topps card!

Oh, and you have to protect these cards well because they're delicate and surface wear or cracking will devalue your masterpiece.

Tell me that's not art. 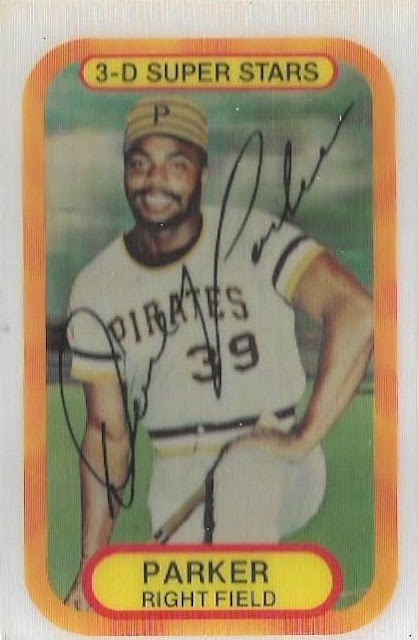 I am in the middle of collecting the 1977 Kellogg's 3-D set, the first Kellogg's cards I ever pulled out of a cereal box and placed in my collection.

Kellogg's was about the only competition for Topps during the 1970s. Every year it would release a "stealth" set that you could only find on its cereal  boxes, either inside on the box or ordered off the side of the box.

The cards were a total independent creation, from something called "Visual Permagraphics". Kellogg's didn't borrow images from Topps like Hostess did, and although the 3-D design resembled the 1968 Topps test issue, Kellogg's wasn't afraid to put it out on the market for kids to judge for themselves. Take it from someone who was collecting the cards at the time, shoving his arm into boxes of Frosted Flakes with the same sense of urgency that someone clicks "buy" for a Project 2020 card.

These cards were mind-blowing.

This was as fresh of a design that existed at the time, a mile away from what Topps was showing off in packs. The differences were apparent even on the back of the card: mug-shot images of the player, listing of the player's hobbies, team logos, detailed biographies, stuff you couldn't get anywhere else.

Come on, THIS IS ART. 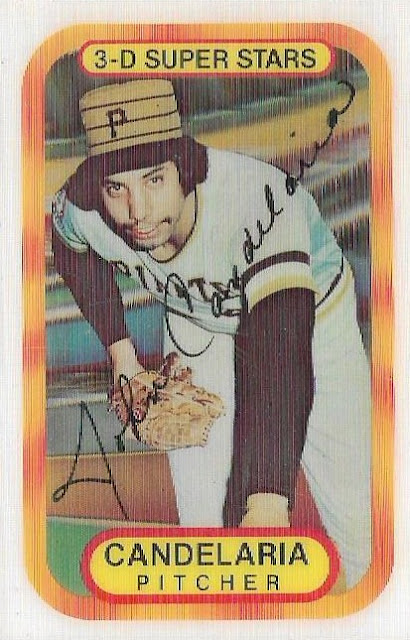 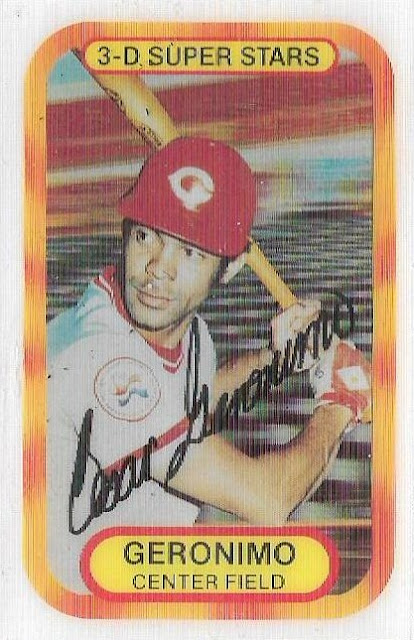 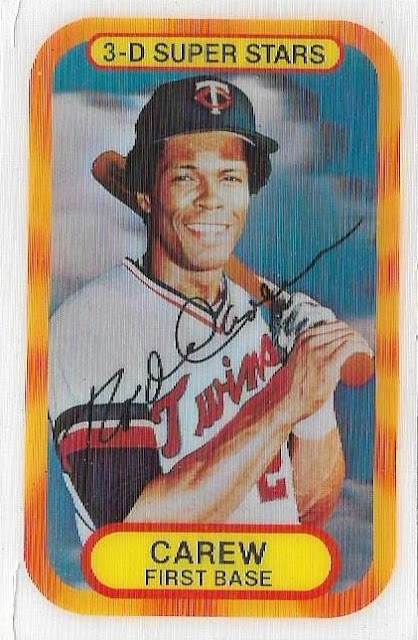 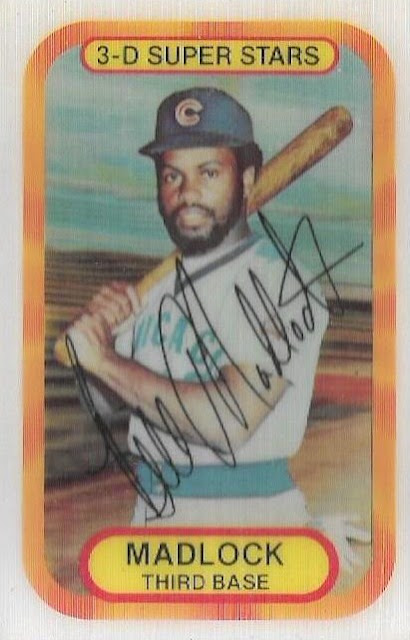 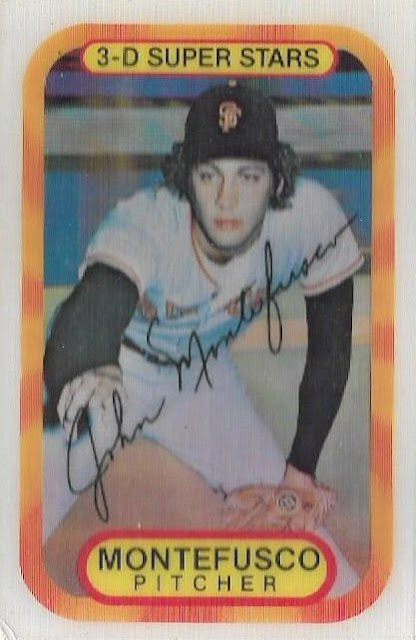 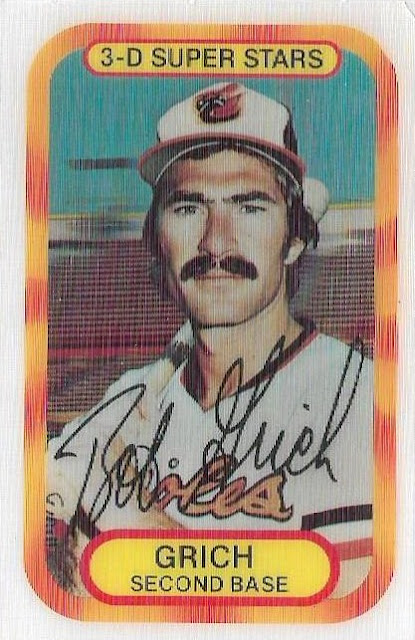 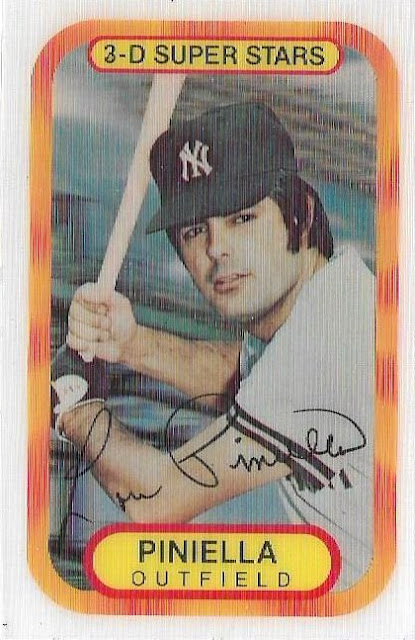 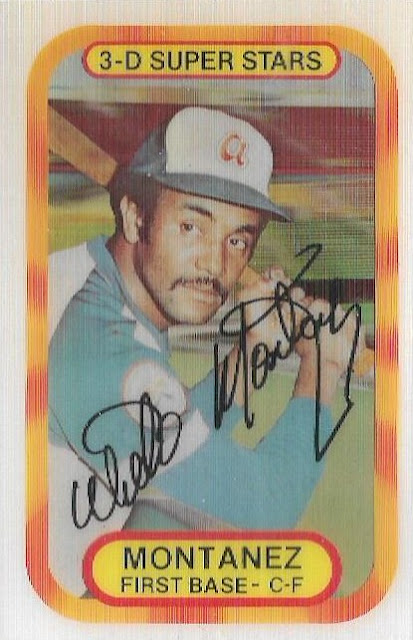 "But the cards were created 43 years ago."

"We've come so far since then with our digital graphics and street culture and our espn-ifiying of everything."

Yeah, OK, stuff sells because it's new. People need to get in on the latest. They need to feel that buzz.

But that doesn't mean old stuff can't be art or desirable. Look at what's hanging in art museums. Some of that art is centuries old. 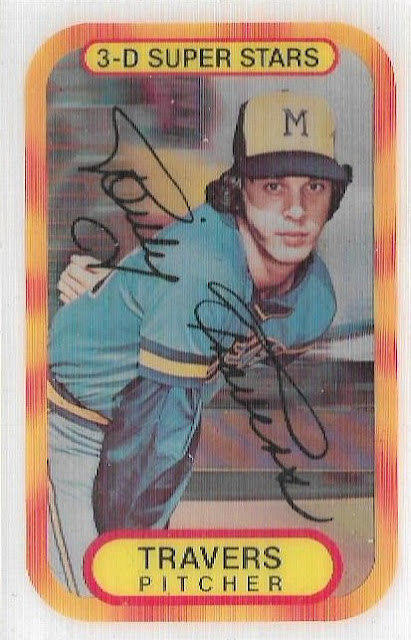 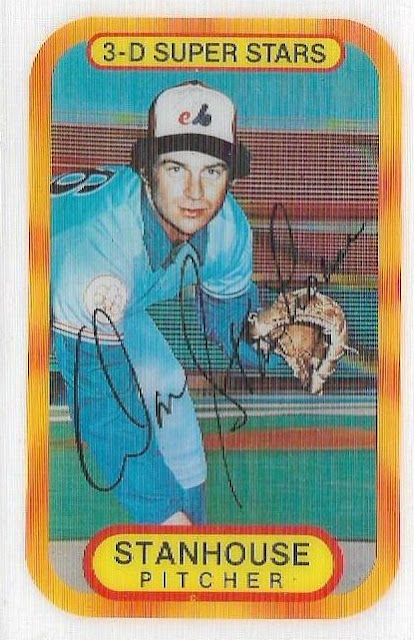 Yet, you can get a 40-year-old Kellogg's ART card for just a quarter in many cases.

I shouldn't complain. The cards that interest me are usually not expensive at all and I should remember that always. It shouldn't be "these cards don't get enough credit," it should be "these cards are ignored and thank goodness because I can afford them."

But don't tell me these cards aren't art or any different from the Project 2020 cards.

These Kellogg's cards had to be constructed like those Project 2020 cards. And, unlike most of the Project 2020 cards, there was no previous card to use for inspiration. Each year, Kellogg's unveiled a new creation, all the while they were creating dozens of different kinds of cereal, too. All Topps did extra was throw in a slab of inedible bubble gum with its cards. 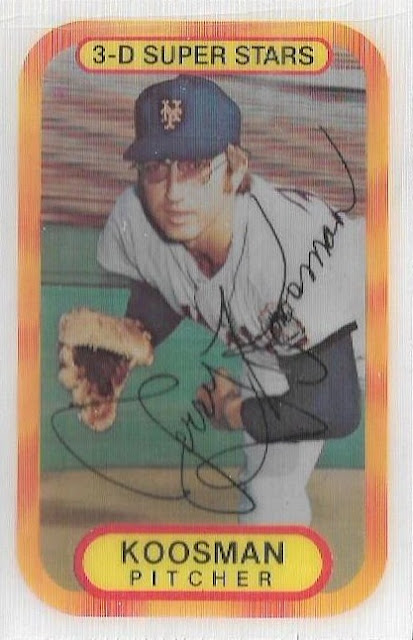 Just look at those glasses.

A main reason why I collect cards is because they are rectangular pieces of art. I think a lot of card collectors collect because of that, even if they've never thought in that way before.

But fortunately, most of my card art costs less than $19.99 a card.

Jeremya1um said…
I’ve never really seen the big deal with the Kellogg’s sets, but I am smart enough to know that they are more works of art than 95% of the crap that the Project 2020 has put out there. I can’t believe people think Keith Shore has talent. The guy who does the ones with no faces and the guy who draws the snakes/smoke lines/cloud thingys coming out of players aren’t much better. People have the right to collect what they collect and nobody’s going to stop people from buying these cards, but I don’t see how people would buy most of these if they were in a nickel box.
The joke is on Topps. Now you have a couple of extra 20’s in your pocket to add some real works of art to your collection like the Kellogg’s cards or some Dodger ones.
Hopefully for the sake of real collectors, Topps makes this a one and done thing like Topps Laser (although they should totally bring that set back).
June 3, 2020 at 8:35 PM

Elliptical Man said…
When I think of baseball cards that are art, I think of the Dick Perez Diamond King cards.
June 3, 2020 at 9:50 PM

deal said…
When I returned to collecting Ben Henry had a terrific post where he declared baseball cards were 2.5 x 3.5 inch works of art. I agree with that and it factors into a lot of my collecting.
June 3, 2020 at 10:00 PM

acrackedbat said…
I could not agree more. This particular K-set is one of my faves. I love its oranginess. It contains one of the few Garveys I own. Perhaps Im getting old but Topps 2020 Project is a waste of money imo. Resellers are likely the ones buying most of these. I do not own one, and will not own one unless someone is crazy enough to buy it on my behalf. I would then slap it up on ebay. Pooey.
June 4, 2020 at 6:43 AM

Jeff B - Wax Pack Wonders said…
You nailed it, although I hadn't really thought about it that way before.

I remember getting the feeling of getting the early 90s Kelloggs cards in cereal boxes and that was always fun. They don't hold a candle to the earlier versions though.

Fuji said…
You already know that I'm in your corner with Kellogg's. And I'm with you on the Project 2020 cards as well. The only difference is that if I end up buying one of them, it'll be a Gwynn or Rickey, instead of a Koufax or Robinson.

GCA said…
I'm all done with the Topps sets of the 70's, so I've started on the Kelloggs. A lot of them have variations and everything! Gotta love that!

Bo said…
You forgot perhaps the most important artistic aspect of the card - the photographer who takes the original image in the first place.
June 4, 2020 at 11:23 AM

The Angels In Order said…
BOY do I miss shoving my hand in a cereal box, feeling around for the card, then pulling out the prize being careful not to spill any of the cereal. Good times!
June 4, 2020 at 1:09 PM

gregory said…
As a guy who doesn't collect modern cards, I had to look up this Project 2020 thing. And after looking through some of the cards, I have to agree with Jeremyalum and Julie. Blech.

Nick said…
Kellogg's cards are way better pieces of art than any of those Project 2020 thingies.

I often have to remember that the Topps (or Kellogg's!) designs we now regard as iconic once had to be born and created out of nothing but an artist's mind.
June 5, 2020 at 12:03 AM