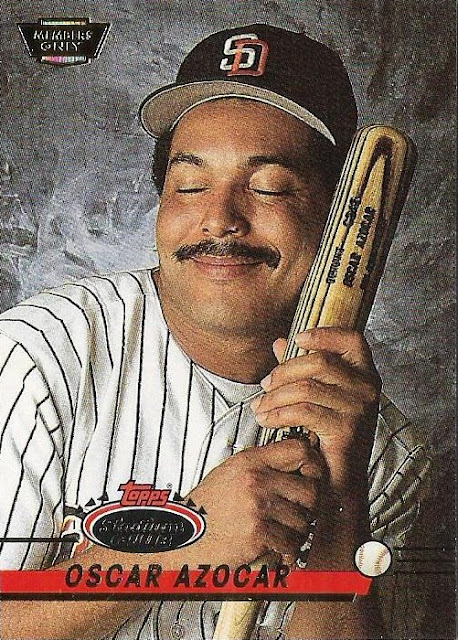 I haven't written a "Legends of Cardboard" post in almost three years.

That's because it's taken me that long to get this card. Who knew a card of someone who barely registered on a major league roster, from 1993, would be so elusive?

Yet, every time I searched for the famed Oscar Azocar "bat-hugging" Stadium Club card on COMC, it would be sold out. A few times (such as now), it's available on that site for almost 6 bucks. No thanks.

I ended up finding it on Sportlots for 18 cents. And, how about this for a development? It arrived today from someone who lives in my town. Heck, he could have driven over and dropped it in my mailbox.

Finally, it's mine. I wanted to hug it like Azocar is doing to his bat.

Azocar is the latest Legend of Cardboard -- keep in mind Legends of Cardboard are those players who didn't necessarily excel on the field but certainly excelled on cardboard.

He is a Legend of Cardboard because he not only produced the above photo, something that has never been shown on a card before or since ... 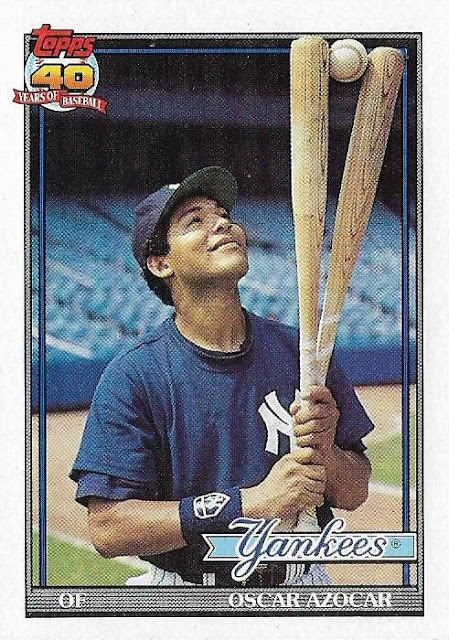 ... but he also produced this photo, something that definitely has never been shown on another player's card before or since.

I'm not even sure how Azocar was able to manage the above feat. It looks almost impossible.

He appeared on these two cards even though his major league career lasted just 202 games and three years, 1990-92. That is definitely a legendary feat.

Azocar is pretty much forgotten by anyone who isn't a card collector. Oh, sure, some Yankee fan will pipe up about how Azocar signed a baseball for them back in 1991 and they will never forget him, but the vast majority has moved on from remembering Azocar, who sadly died of a heart attack at age 45 a whole 10 years ago.

Azocar was a free-swinging free spirit, who could never quite win a starting role because he had no restraint when it came to waiting for his pitch. A classic bad ball hitter, he is quoted on the back of his 1991 Score card as saying, "I try to be selective, but I don't know how. I see the ball, I swing."

Azocar was also a fun-loving soul as evidenced by those two cards above. He even duplicated the bat-and-ball feat for a Mother's Cookies card in 1992. 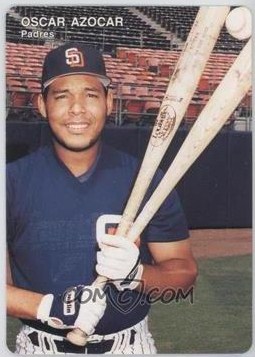 Seriously. How does he do it?

Azocar does feature a few run-of-the-mill cards but even some of the more average cards are pretty good. 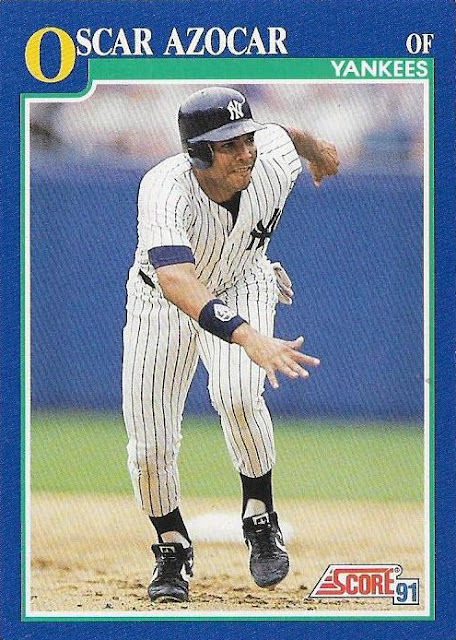 I love a good base-running shot. 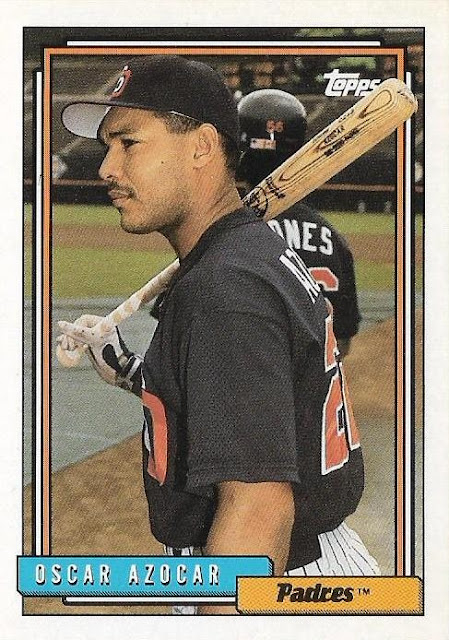 Azocar appears to be waiting out a rain delay here as there's tarp on the field. I think the player behind him is pitcher Ricky Bones. 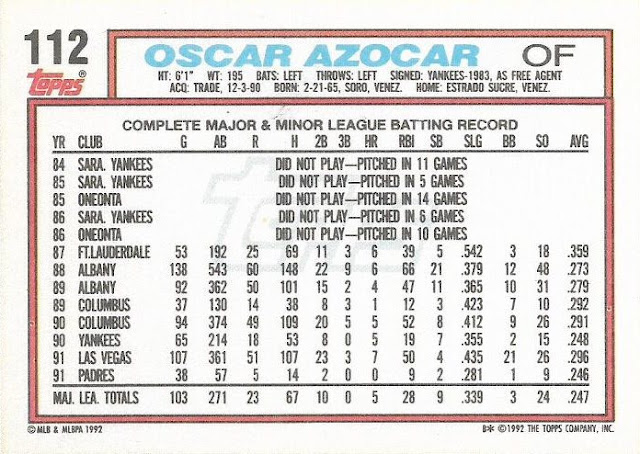 He spent the first three years of his pro career as a pitcher. He did quite well, too. It's pretty weird, though, that Topps doesn't consider pitching as "playing." 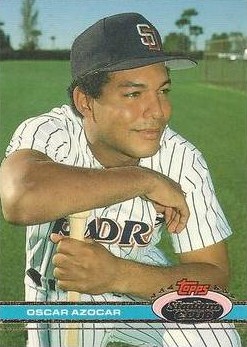 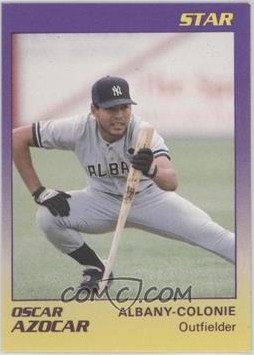 A couple more fun ones that aren't in my collection.

You can tell, just from a simple look at his cards, that Azocar was personable, playful and enjoyed the game. His personality was so strong that it leaps out of his cards.

And even though his career didn't last long (he did enjoy a successful career in the Mexican League during the 1990s) and he isn't around anymore, his legacy continues among those who collect baseball cards.

And that's why he's the latest Legend of Cardboard.

Jeff S said…
I remember Oscar from his time in Albany. The AC Yankees were my local minor-league team growing up and I spent a lot of time at Heritage Park. Very worthy addition to your Legends. I love the '91 Topps card.
June 10, 2020 at 7:56 PM

acrackedbat said…
Azocar's love for the game was evident. These cards bring a smile to my face every time. It's a shame he died so young. I can see how he would've remained in the game perhaps as a coach.
June 10, 2020 at 8:15 PM

Sean said…
That was both nice and depressing. I remember Azocar from when he played with the Yankees but had totally forgotten about him until reading this post. Seeing those cards I felt like I was getting to know something about him I never did before, what an inspiring fourth outfielder with such pluck and joie de vivre and....

Nice though that he lives on in posts like this, probably not something he would have predicted would happen when he posed for those photos so many years ago.

Nick said…
I'd have no idea who Oscar Azocar was were it not for his baseball cards. One of the many reasons collecting has had such a profound impact on my life.
June 10, 2020 at 11:43 PM

Commishbob said…
I remember having seen that SC card someplace and laughing. I had no idea he had pased away at 45. How does that happen?
June 11, 2020 at 1:13 AM

Billy Kingsley said…
To this day I still wonder why I never joined the Stadium Club club so I could get those members only parallels like the card you lead off with.
I have to wonder if the two bats work like giant chopsticks? That's a serious skill right there.
June 11, 2020 at 1:25 AM

Fuji said…
Wow. The Stadium Club card is famous, but I didn't realize his 1991 Topps card was so cool too. Although that shouldn't surprise anyone since that set featured some amazing photography. That Mother's Cookies card is another classic. Definitely a legend of cardboard.
June 11, 2020 at 10:12 AM

Bo said…
Azocar was a fun player on a really bad Yankee team. I remember him fondly. I also remember it being pointed out at the time that he was the only major leaguer with a car in his first and last name.
June 11, 2020 at 10:42 AM

Troublewiththecurve.net said…
Definitely an iconic and fun card! When comparing the Stadium Club to his 1991 Topps, he looks about 50 pounds lighter in the 1991 Topps card! I've always loved that 1991 Topps card. I do remember him when he played for the Yankees AAA team (Columbus Clippers). They were often in town playing the Tidewater Tides. That was back in the early 90's I believe. I had no idea that he had passed. Looks to have been a heart attack at the young age of 45. RIP.
June 11, 2020 at 3:05 PM

Shlabotnik Report said…
Almost everything I would say has already been said by now, so I'll just say that I enjoyed this post, thank you for it.
June 18, 2020 at 3:08 AM