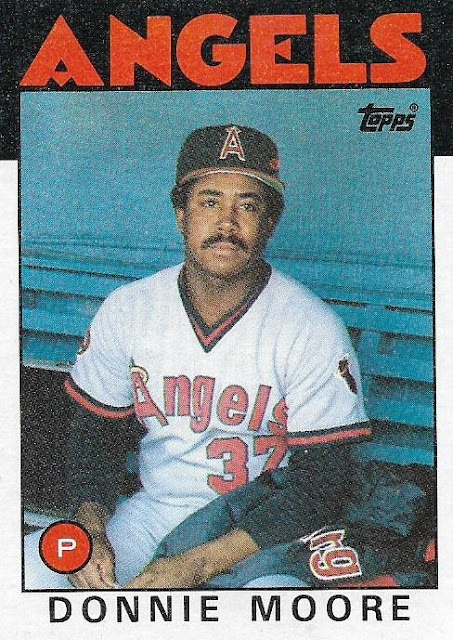 (I've begun packaging some of the prizes for the giveaway. I believe I now have everyone's address except for Jeff S. Just send me an email!)

But those traditional baseball goats still exist in history. And they exist on baseball cards.

When I look at a card issued of a player during the year in which he suffered a great on-field misfortune, I often think: "if they only knew." If Donnie Moore only knew he was going to give up that home run to the Red Sox's Dave Henderson and the course of his life would be changed forever.

Donnie Moore, who was pitching hurt that fateful night, had a few other demons running through his head than just that home run and it would lead to the end of his life. There were a few fellow pitchers that could share the blame with Moore in that Angels loss in 1986 but the blame came to rest on Moore.

His 1986 Topps card seems to capture some of the sadness that would surround him that season. If he only knew. Bill Buckner, on his 1986 Topps card, doesn't look like he has any idea what's to come. His days as a young speedster for the Dodgers, a hitting machine for the Cubs would blow up with a single missed ground ball in a pivotal Game 6 of the 1986 World Series against the Mets. 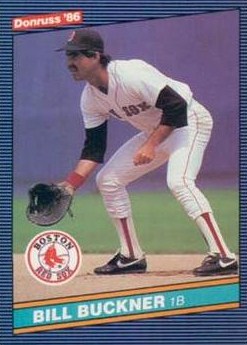 The 1986 Donruss card does a good job of foreshadowing Buckner's fate. Look at the bouncing Red Sox logo eluding Buckner's glove and heading through his legs.

Buckner, of course, deserved better from the fans and media (and 1990 Upper Deck). If Calvin Schiraldi and Bob Stanley had done their jobs for the Red Sox it wouldn't be 18 more years before their Series curse was lifted. 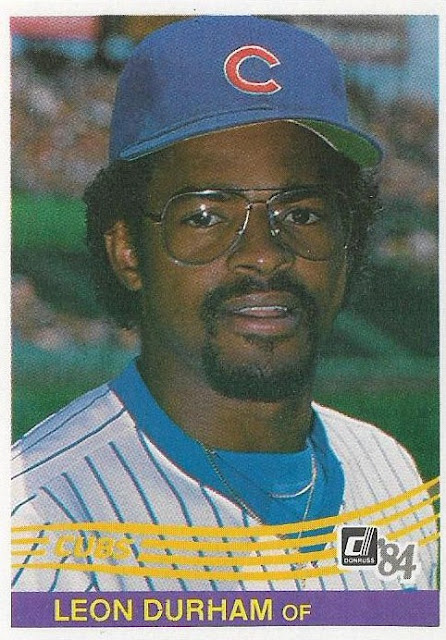 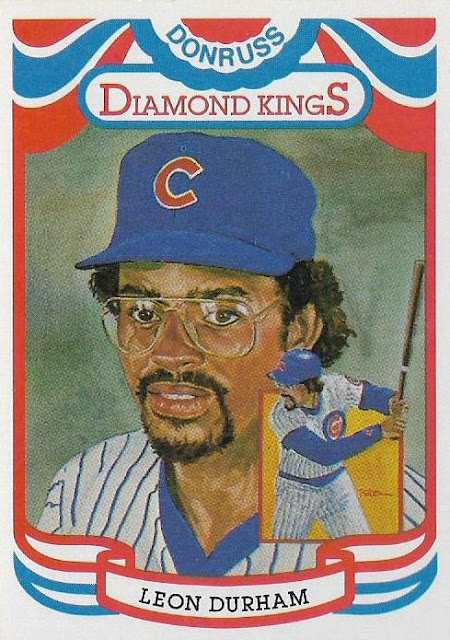 Another first baseman, Leon Durham, was hardly a Diamond King during Game 5 of the 1984 NLCS against the Padres.

Although he did well at the plate during that series, he's remembered for booting Tim Flannery's grounder at first in the seventh inning of the decisive game, allowing the Padres to tie the game and eventually win it 6-3.

With that bit of knowledge, Durham appears a bit concerned about entering the 1984 season. 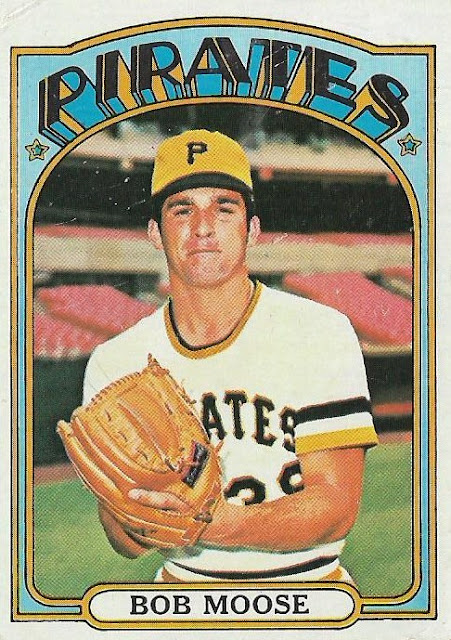 Watching your team lose its chance of reaching the World Series on a wild pitch had to be crushing. Bob Moose's wild pitch in the ninth inning allowed the Reds' George Foster to score with the winning run after the Pirates entered the inning with a one-run lead.

Bob Moose seems like he wants to utter an apology for what's about to happen in the upcoming season.

But I guess Pirates fans couldn't complain too much, they did win the World Series in '71. 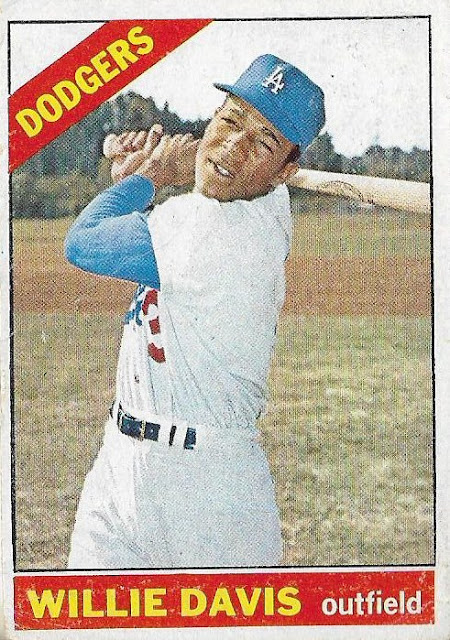 Equally, I can't imagine what it would be like to witness Willie Davis' three errors in one inning in the 1966 World Series.

I'm sure as a Dodgers fan, I would have been crestfallen watching him drop two fly balls and then make a throwing error. I've seen plenty of Dodgers disasters in the postseason. That could have topped them all.

But there is Davis on his 1966 card, oblivious to the tragedy about to befall him. Ask a Braves fan about the villain in the 1991 World Series and they'll immediately bring up Kent Hrbek, who allegedly pulled Ron Gant off the first base bag causing the ump to call Gant out, in Game 2 of the Series.

But maybe if Lonnie Smith had scored on Terry Pendleton's double in the eighth inning of a 0-0 game in Game 7, the Hrbek-Gant play would have been moot. Smith strangely slowed down at second base and had to settle for a spot at third instead of scoring. Many said Smith fell for the decoy at second by Chuck Knoblauch, but it's obvious Smith wasn't looking at what he should have been, either where the ball went or the third base coach, because slowing down was not the right call.

Smith seems wistful in his 1991 Topps card. The man had plenty of World Series experiences and his share of titles but he was always an odd dude. I later found out, years after his career, exactly how odd he was.

There's another example. I recently discovered a baseball card of Lonnie Smith I didn't know existed. 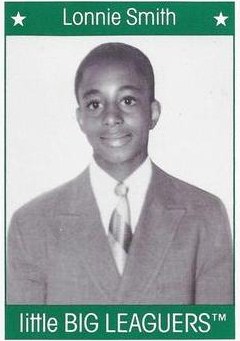 This is from a set called Little Big Leaguers, produced by Simon and Schuster in 1991. The set features players of the day as kids, players like Craig Biggio, David Cone, Chris Sabo, Jeff Brantley and others.

It's a fun set, similar to the Boyhood Photos of the Stars in 1972 Topps.

But here's the back of Lonnie's Little Big Leaguers card: 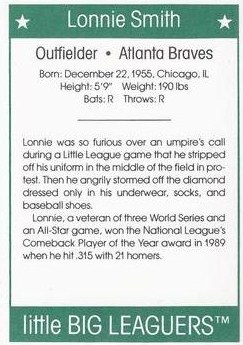 With that kind of track record, you would think the base-running blunder would have really affected Smith, maybe even on the level of a Donnie Moore.

But thank goodness, Lonnie Smith is still with us. 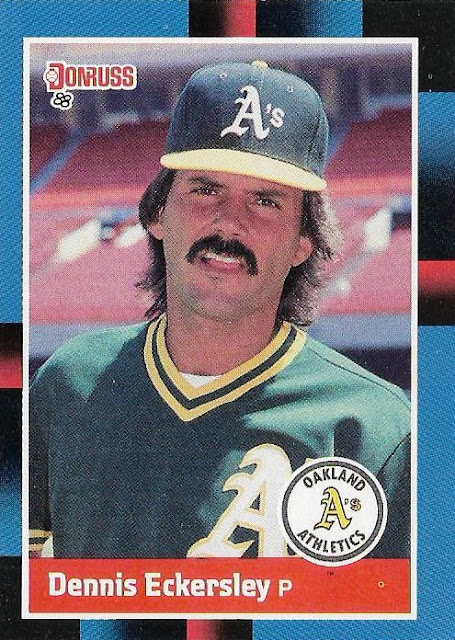 There are are many other examples of "If They Only Knew" cards, but I've written long enough.

We never know what's in our future. We can only hope that when something difficult does happen that we can handle it and aren't remembered for it for all of eternity.

Elliptical Man said…
Clearly I need to take some time to think of post ideas.

Garvey's homer is what I remember from that Padres - Cubs series.

Mitch Williams giving up the Joe Carter homer was agonizing. But I wouldn't put it in the same category as an error or a base-running gaffe.
June 1, 2020 at 8:19 PM

Brett Alan said…
The first time I heard of "goat" in the positive sense was when LL Cool J released an album in 2000 called G.O.A.T. (Greatest Of All Time). I've often wondered whether that phrase originated with him, or was already around at that point.
June 1, 2020 at 8:43 PM

blog reader bruce said…
For many years, my favorite read during the World Series was in the New York Daily News with the late Bill Gallo's "Hero" versus the "Goat" of the game.
June 1, 2020 at 9:08 PM

Commishbob said…
Let's try this again...I remember the Davis errors like it was yesterday. I watched the game at a friend's house and I recall him asking me what my cousin, a serious Dodgers fan, must be feeling. Frankly, we were pretty stunned by the Orioles' good fortune.
June 1, 2020 at 9:12 PM

Captain Canuck said…
ah, sports terms... Like in hockey. For decades "dangle" meant a guy who could really skate. Think Yvan Cournoyer. Flat out speedster.
Now sportscasters use the term to describe stick handling.
How the heck they went from one to the other is beyond me....

Fuji said…
As soon as I read the part about Donnie Moore, I knew Eck would follow at some point. As depressing it is to always think about him giving up that home run to Gibson, it's not nearly as tragic as Moore's story.
June 2, 2020 at 6:57 PM