'56 of the month: Eddie Robinson 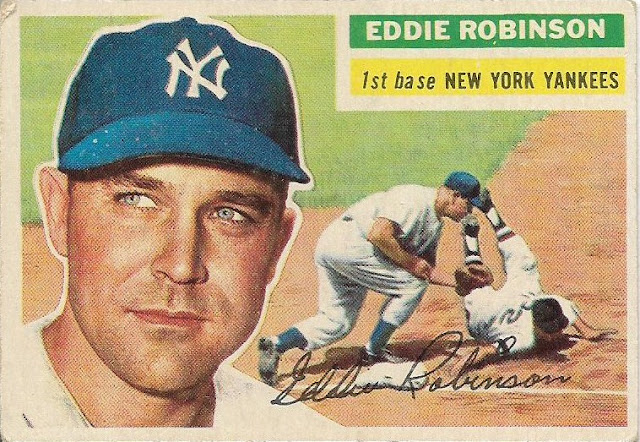 Right now, this is one of my favorite cards in my collection.

I can see you staring at me aghast.

A Yankee card? One of your favorties?

Yes. Calm down. First, it's a Yankee from a long time ago, not one of those annoying ones from the last 45 years. Second, the reason it's my favorite doesn't have anything to do with him being a Yankee here.

No, it's one of my favorites because Eddie Robinson happens to be the oldest living former major league player. He is 99 years old, and took over the "oldest living" title last November. God willing, he will turn 100 in December.

I don't know how often I've had the oldest living former major leaguer in my collection, but this is the first time I've been aware of it. I think I've been paying attention to that "oldest" list more often since we're losing players from the '50s at a rapid rate now. These were the first "old" ballplayers that I knew, thanks to the gift of a bunch of 1956 cards when I was a young teen. And I've been sorry to see every last one of them go.

But back to Robinson. 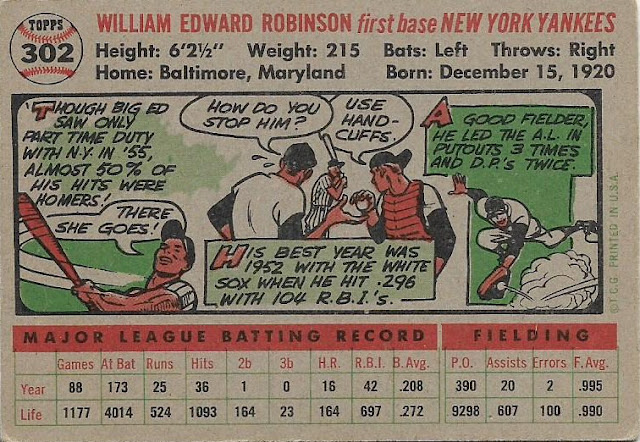 Robinson (December 15, 1920!) was known as a slugger and he did most of his damage for the White Sox in the early 1950s. By the time he reached the Yankees he was strictly a bench player.

Robinson later became known as a major league general manager, working as GM for the Braves in the mid-1970s and the Rangers in the late '70s and early '80s. After that, he worked as a scout.

Since he played for a bunch of teams -- every original AL franchise except for the Red Sox -- he is the answer to "who is the oldest-living player" for the Yankees, White Sox, Indians, A's, Tigers and Orioles. He's also the oldest-living former Washington Senator.

But heck, he's the oldest-living in any MLB category you want to name, except probably bat boy. The guy played eight games in 1942!!

I hope Mr. Robinson is as well as can be expected in his advanced state. Now that we're in the '50s in terms of the oldest surviving players, I will probably have many more opportunities to possess a card of The Oldest Living Major League Player. I hope Robinson doesn't take any offense to my look into the future.

Not rushing you out the door or anything, sir.

Old Cards said…
Great story. Obviously, I like old cards, so any story about old cards is usually a good one. Like you, I am not a Yankees fan, but I have many cards of Yankees in my collection that I would not part with.
June 10, 2020 at 12:10 AM

Fuji said…
I don't think I gave much thought into who was the oldest living player until I read that Bobby Doerr held the honor a few years ago. The name Eddie Robinson is familiar, but I wasn't familiar with the baseball player. I remember reading about the Grambling State University head football coach). That being said, this is a great looking card. The painting of the pickoff throw and dive back into first is awesome. I'm assuming he's the guy playing first base... but I guess there's a chance he's the runner.
June 10, 2020 at 9:42 AM

Commishbob said…
He was a signing guest at a card show I drove up to in Dallas last summer. I broke my own rule and paid to get his book signed. It wasn't crowded (he spent much of the time waiting for people to stop by) and he was happy to talk to anyone and everyone. He sure didn't seem to be nearing 100.

I have one of his game-used first-baseman's mitts and I wish I had thought to bring it along with me.

Chris said…
The iconic photo of a frail Babe Ruth in Yankee Stadium giving his farewell speech to baseball shows him using a baseball bat as a crutch. It was Robinson that offered Ruth his bat to use. He said that he kept it for years until he finally sold it. $10,000 was the price. I wrote a bit more about Robinson over on my blog if you’re interested.
June 11, 2020 at 9:13 PM