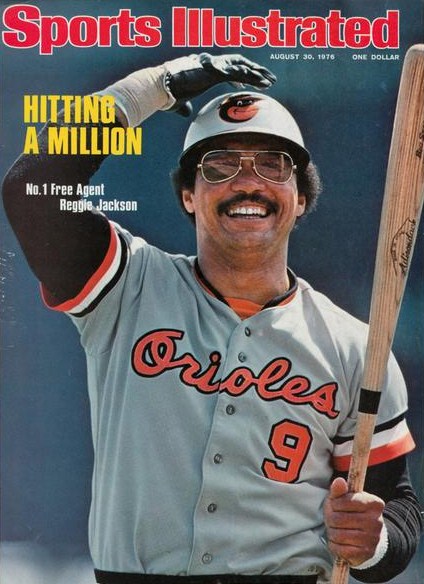 I've written a few times that the first sports publication that came to my house was Sports Illustrated in 1976.

Because of that, I have all of the SI covers from that year memorized, even for sports that I didn't have a clue what they were at the time. SI cover subjects like Steve Cauthen (horse racing?) and Dwight Stones (high jumping?) are etched in my brain.

Of course, the baseball covers were the only ones I cared about, and there were some classics on SI fronts that year, the famed Red Sox-Yankees fight, the George Brett cover boy photo, George Foster staring ominously at the reader as the playoffs approached, and, of course, Reggie as an Oriole.

I've known about Reggie Jackson's one season as a Baltimore Oriole since that very year, also the first year I really paid attention to baseball. Even though I didn't follow the sport much during his Oakland A's days, it was still unusual to see Jackson as an Oriole that season.

Pending free agency was in the news everywhere that summer and everyone knew that Reggie's one season with the Orioles would be one season only. The Yankees were his likely destination and his destiny.

I feel fortunate that I got to know Jackson as an Oriole for an entire baseball season because in the years since, his time there is treated as something of a freak show. Reggie Jackson??? An ORIOLE??? Mr. October was an ORIOLE? Well, yeah, he was an Oriole before he was even Mr. October, so wrap your head around that one, Jojo.

One of the reasons for the fascination is there aren't a lot of baseball cards showing Jackson as an Oriole.

His Baltimore season came during a time when one company issued cards. And that company tried like hell to get the player in his correct uniform on the card, even if they had to paint that player into his new uniform and hat.

So, Jackson's 1977 Topps card, which is supposed to reflect his 1976 season, shows him in a painted Yankees helmet and lists him with the Yankees.

There IS a 1977 Jackson Orioles card, as you well know. It's a proof card. It's impossible to find. He also can be found on the '77 Orioles team card, if you don't mind him sharing cardboard with 25 other players, and a trainer. 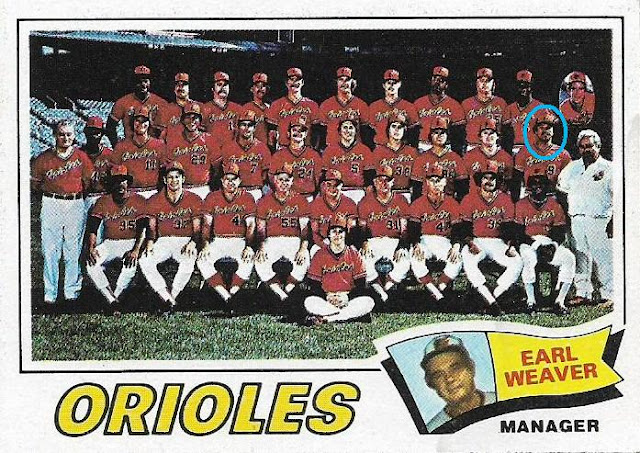 There he is, circled in blue, next to the inset photo of Jim Palmer, and trainer Ralph Salvon. 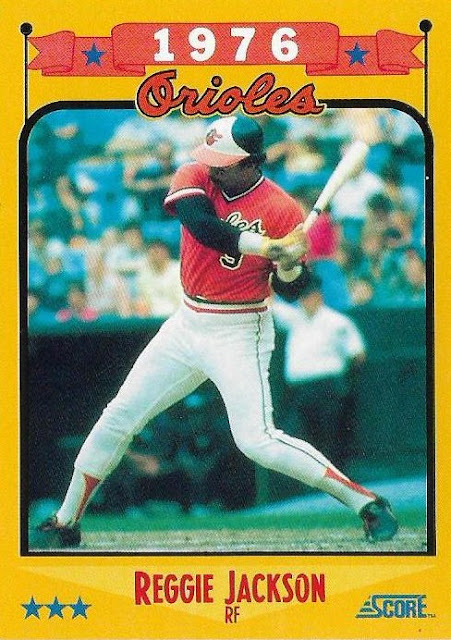 Well, this was the standard for a long time, basically the only card of Reggie Jackson in Orioles garb that anyone could find, from the 1988 Score set (there's that 1990 Upper Deck card showing Jackson in various uniforms, but since that's a painted sketch, I don't count that).

It was a moment of pride when I obtained this '88 Score card -- finally confirmation that what I saw for five months in 1976 actually happened (Jackson didn't join the Orioles until May).

Jackson also appeared in the Crown/Coca-Cola all-time Orioles set issued in 1991, a rather unattractive, squat, black&white offering. And the very SI cover that I received in my home in 1976 is replicated in the 1999 Fleer SI set and a copy of that card is currently residing in my online cart because, my goodness, what took me so long?

But that was basically it until a brief blossoming of "Jackson as an Oriole" cards between 2011-17.

Most of those don't appeal to me. He's in Orioles gear on the omnipresent 1987 Topps design as part of the 2012 mini insert set. He's sharing time with Adam Jones on a Diamond Duos insert card from 2011. He appears as an Oriole in the 2010 National Chicle set, which uses an image that's used again in 2015: 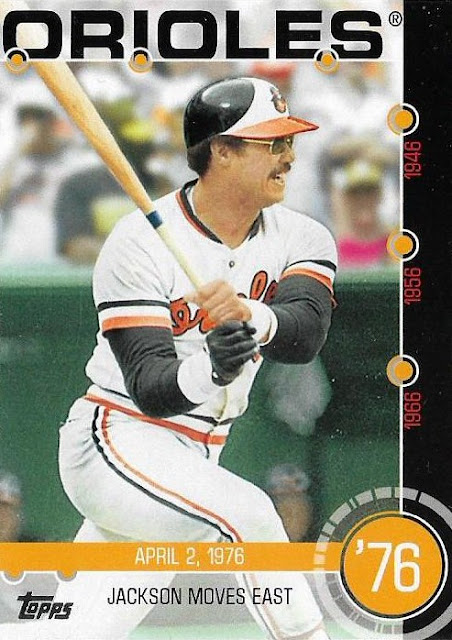 This was part of a weird insert set that combines cards of Jonas Salk and Hank Aaron and tries to convince you that it makes sense. I still don't know the name of this insert set.

But none of the recent Reggie O's cards have been that enjoyable to me, except for one. 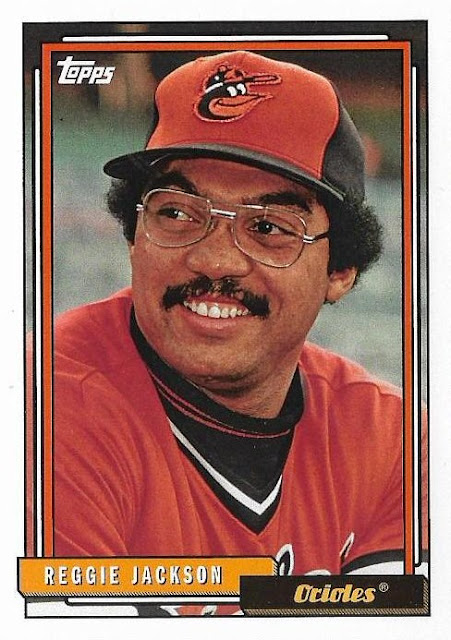 This is from 2017 Topps Archives. If you can suspend the idea that Reggie Jackson in 1976 has no business being on a design that appeared in 1992, then it's not half-bad a card.

This photo is taken from the team photo shoot in '76. Those photos would go on the Orioles' team-issued photo cards released that year. There are a couple different versions of this shot, with Reggie looking left or right, but it's the same basic idea. And spotting Jackson in that bright Orioles uniform and that even more unusual black-and-orange bird cap is something worth having in the collection for someone who actually grew up with Reggie Jackson as an Oriole.

Yeah, it's unusual. It's also, oh, so familiar.

I got this card from Chris at Nachos Grande as part of his Trade Stack exercise. This is just the second time I've claimed a trade stack over there, but it was his 100th one!

The rest of the cards don't really fit my collecting interests. This is probably the second-best one: 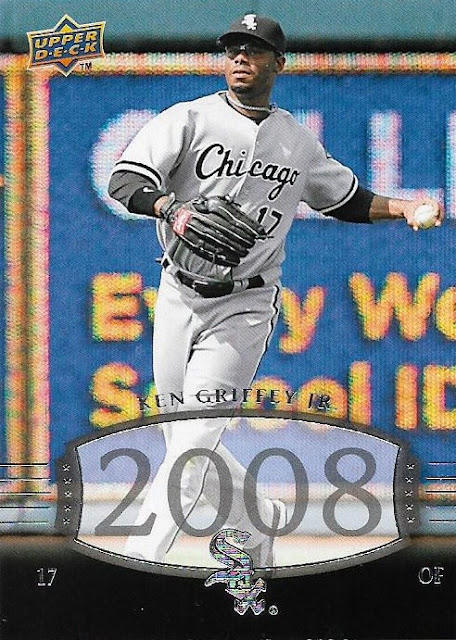 Once upon a time I was collecting the 2008 Upper Deck Timeline set, until I decided it was too difficult and I off-loaded a few cards, mostly to Nachos Grande. 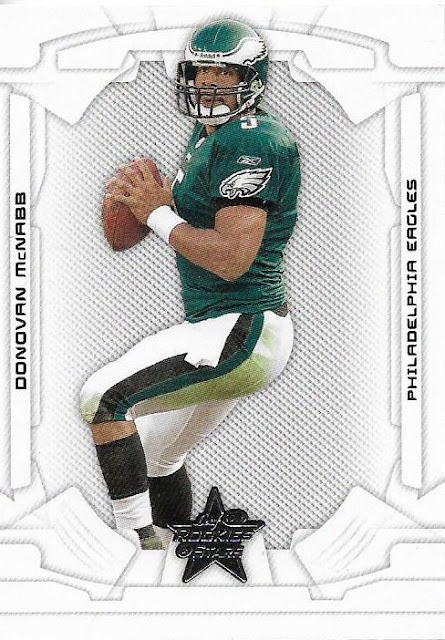 Donovan McNabb goes in my Brush With Greatness binder -- players I've interviewed. I don't collect McNabb cards but I needed an Eagles card of him. 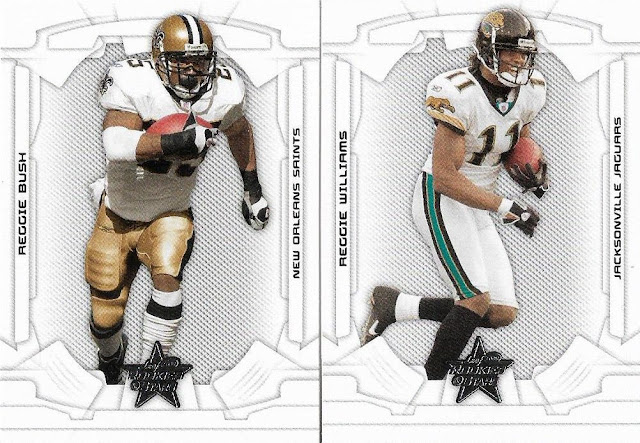 Jackson wasn't the only Reggie in the envelope. These two football Reggies were part of the stack, too. Saints and Jaguars. Wee. 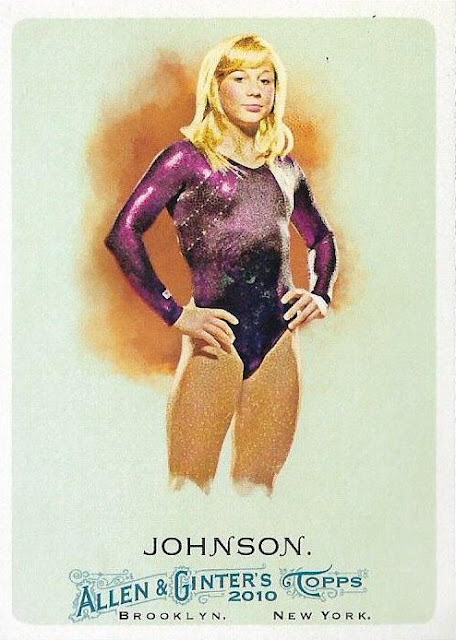 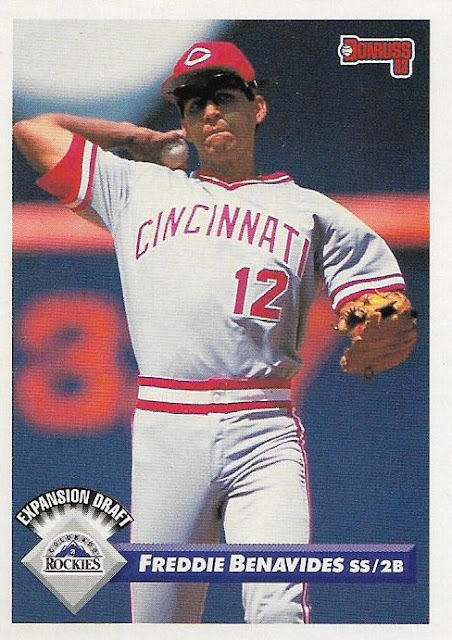 The remaining stacked cards. For a minute I thought Chris mistakenly included Royals instead of Dodgers in the envelope, because that happens all the time. And then I remembered -- oh yeah, I actually claimed these.

Chris nicely sent a small selection of Dodgers along with the Trade Stack cards. Just one of those cards busted through as a need: 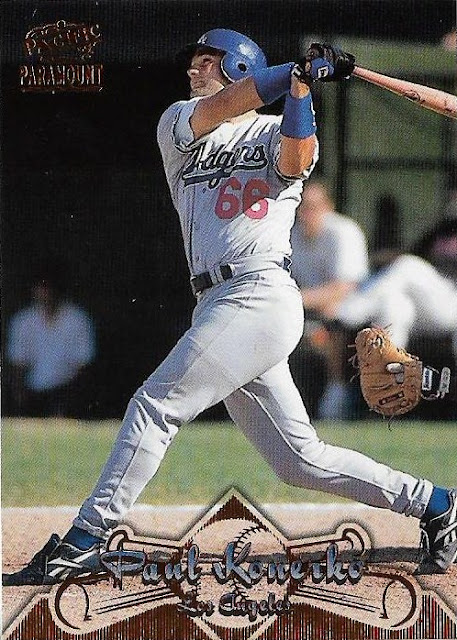 This is my first copper parallel of a Dodger from 1998 Pacific Paramount. It may mean nothing to you, but these are the moments that keep team collectors going. 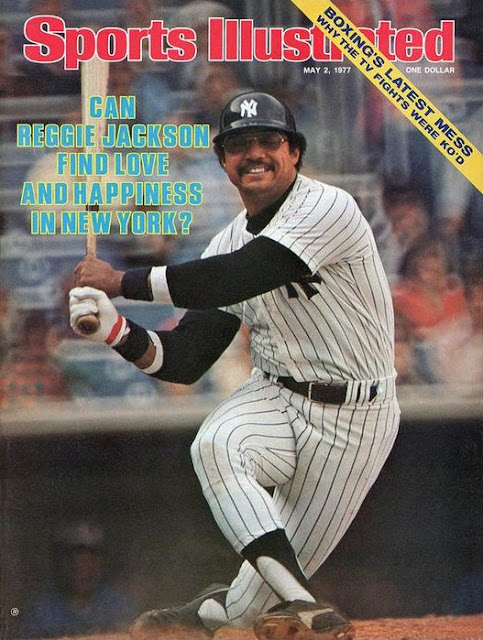 Of course, Reggie ended up with the Yankees in 1977 and any intrigue that I felt in '76 with him as an Oriole was long-gone. To a Dodger fan growing up in a Red Sox house, Jackson was an evil villain for the next five years.

I won't ever remember Jackson first as an Oriole. It will always be as a Yankee or an Oakland A (the Angels years are for '80s kids who never got to see Jackson at his prime, he was more of a Hollywood cartoon by then).

But that Jackson SI cover will stay in my mind forever, and it's not the Yankees one. It's of Reggie as an Oriole.

Johnnys Trading Spot said…
Unusual is weird, and weird is normal. I swear I was in serious deep thought on that very subject this afternoon for a post for this week. Well, a sentence in the post. Still might do it, but it might push some buttons, hehe. You will get that after the post.
May 4, 2020 at 9:12 PM

steelehere said…
I never understood why Reggie Jackson didn't have a 1976 Topps Traded card as a Baltimore Oriole. It's got to be one of the most glaring omissions Topps has ever made that doesn't have a back story around it like not signing a contract with Topps for a period of time (Maury Wills, A-Rod, Ted Williams, Stan Musial...) or just not being a big enough name at the time of the trade (Nolan Ryan not being included shown as Traded in 1972 Topps).
May 4, 2020 at 11:11 PM

Fuji said…
A. I know I ragged on SI a few weeks ago, but it was one of the first magazine subscriptions I had. Not sure what came first Boys Life, Baseball Digest, or Sport Illustrated. Actually... come to think of it... that's a total lie. I had subscriptions to Humpty Dumpty, Highlights, and Dynamite in the 70's.

Brett Alan said…
For Steelehere, there's a very simple reason that Jackson wasn't in the 1976 traded set: he was traded too late. The set was probably finished and sent to the printers right after the winter meetings, as none of the players were traded after December 12, 1975. Jackson wasn't traded until April.

gregory said…
The image on that last SI cover shows just how much Reggie corkscrewed himself into the ground when he swung and missed, doesn't it?
May 5, 2020 at 12:21 PM