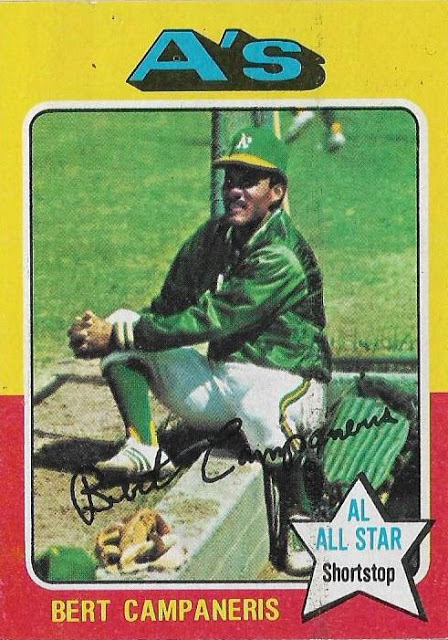 Thanks to all who voted in the comments for their favorite 1970s Topps card of Bert Campaneris.

My thanks to the readers who indulged me with their votes, or even if they didn't vote, their comments on that post. To show my appreciation -- for reading, for commenting, for joining in my card talk even if it might not be a subject you know that much, for commenting without knowledge of a contest involved -- every person who commented is now eligible for a giveaway.

Here are the eligible participants:

Thank you again, you 36 people.

OK, so this is how it will work. It is first-come, first-serve. I will present the available prizes, much like the other Free Card Friday giveaways around the blogs. You will claim what you want in the comments. First to claim gets the prize.

There are NOT 36 prizes. I don't have that kind of inventory (at least not that I want to give away) and I am just starting to get over my aversion to the post office, so I don't want to be backlogged too much. It will take me quite awhile to get these out as it is. I am also working on usual trade packages at the same time.

Some of you won't want this stuff. But I have a feeling some will.

All right here are the prizes. Claim by mentioning the number of the prize. 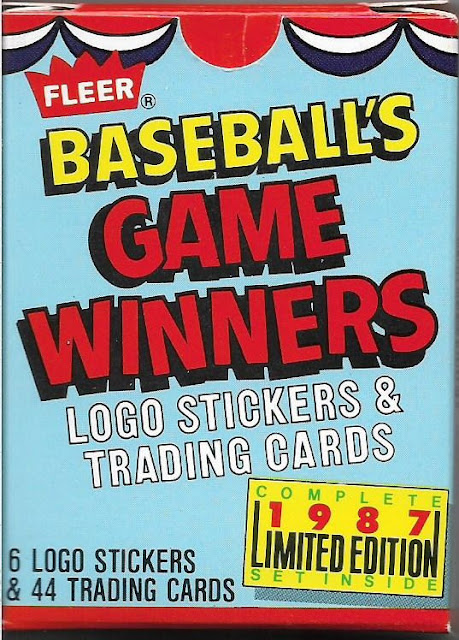 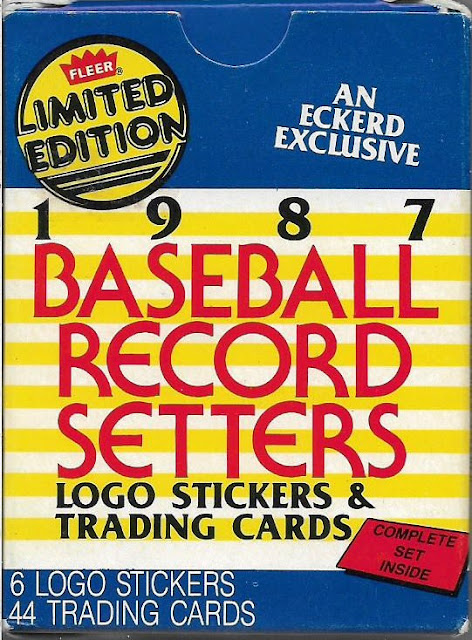 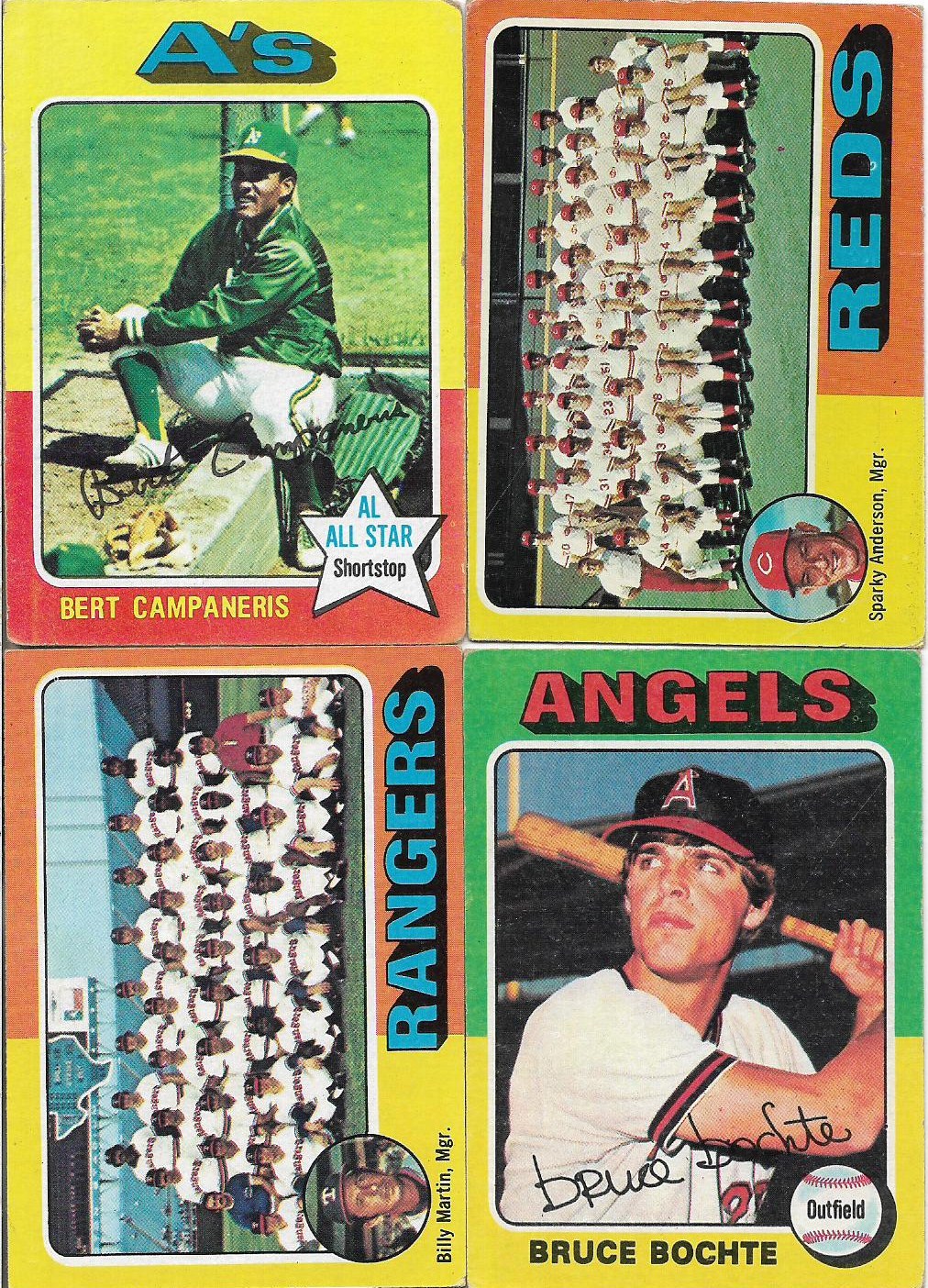 Why, there's the man himself, '75 Bert Campaneris, as part of a '75 Topps lot. The Rangers team card is unchecked on the back, the Reds one is checked, along with having cutting issues. But if you're collecting the '75 set, you know that Red checklist is an elusive bugger and it could come in handy. 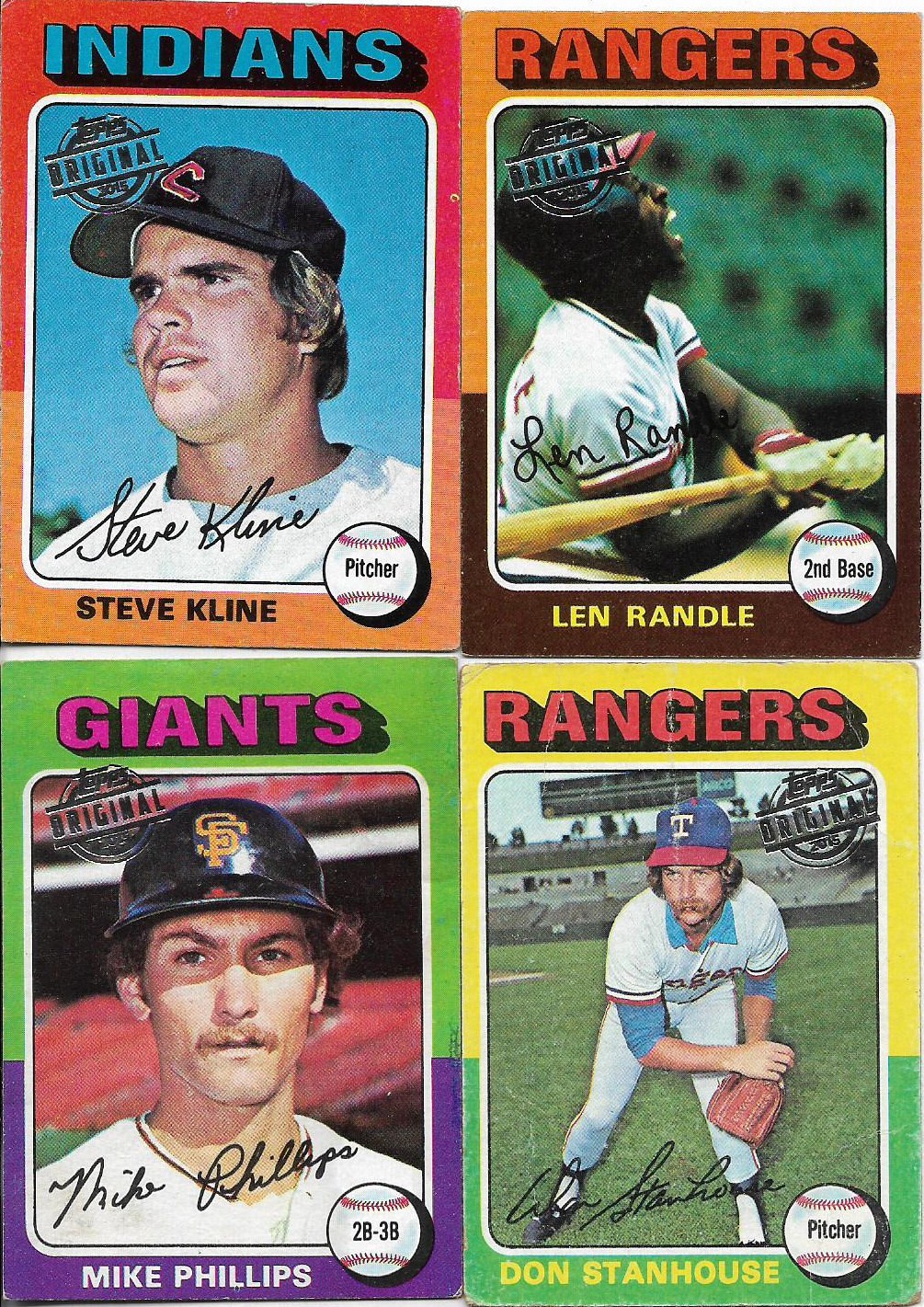 Four 1975 Topps buybacks! Yup, I've got dupes of these things that aren't of use to me. Perhaps you don't mind the stamps if you're trying to complete the set. The Stanhouse card looks like Earl Weaver chewed it up and spat it out and if you get that reference, you might want these cards. 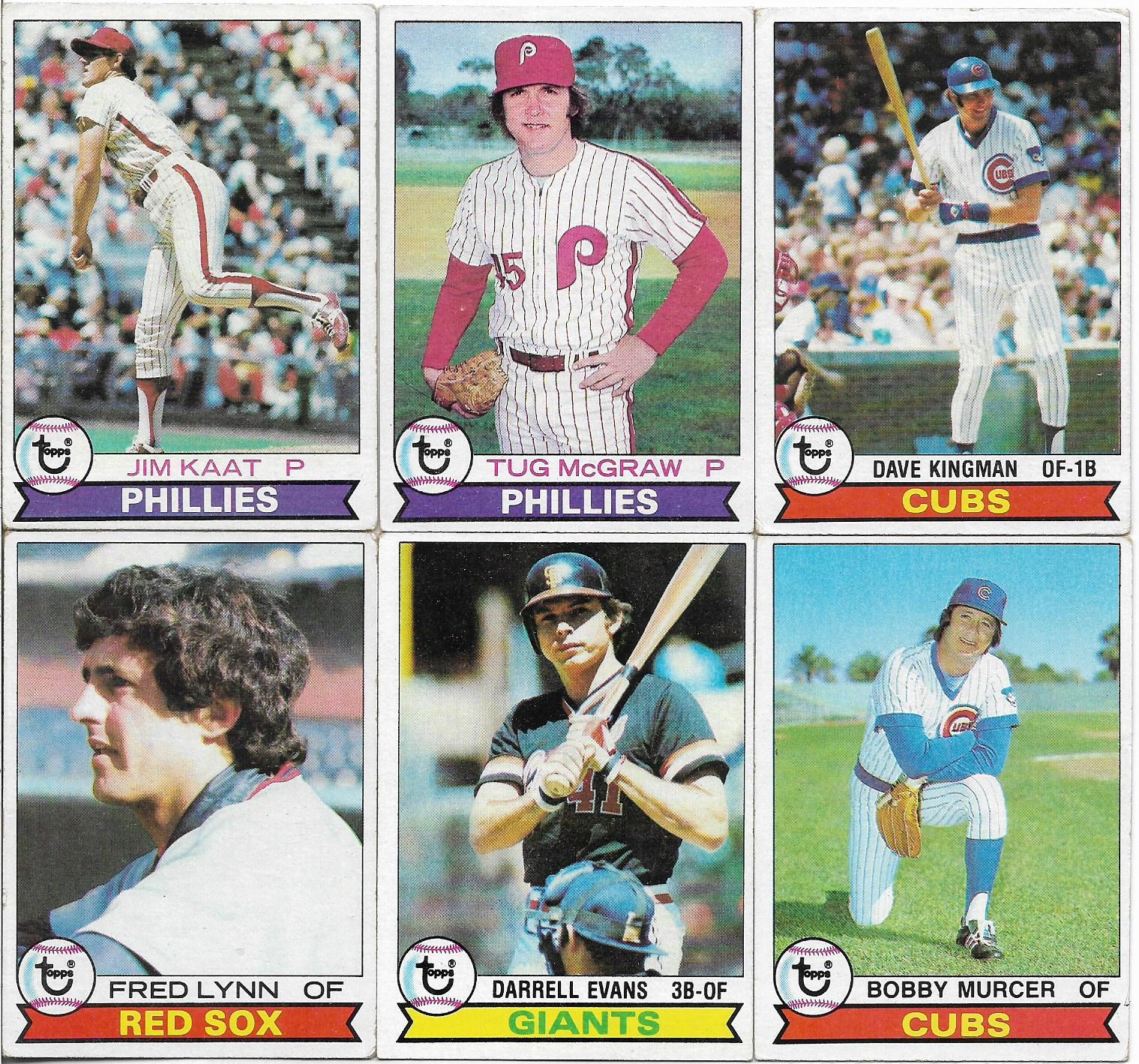 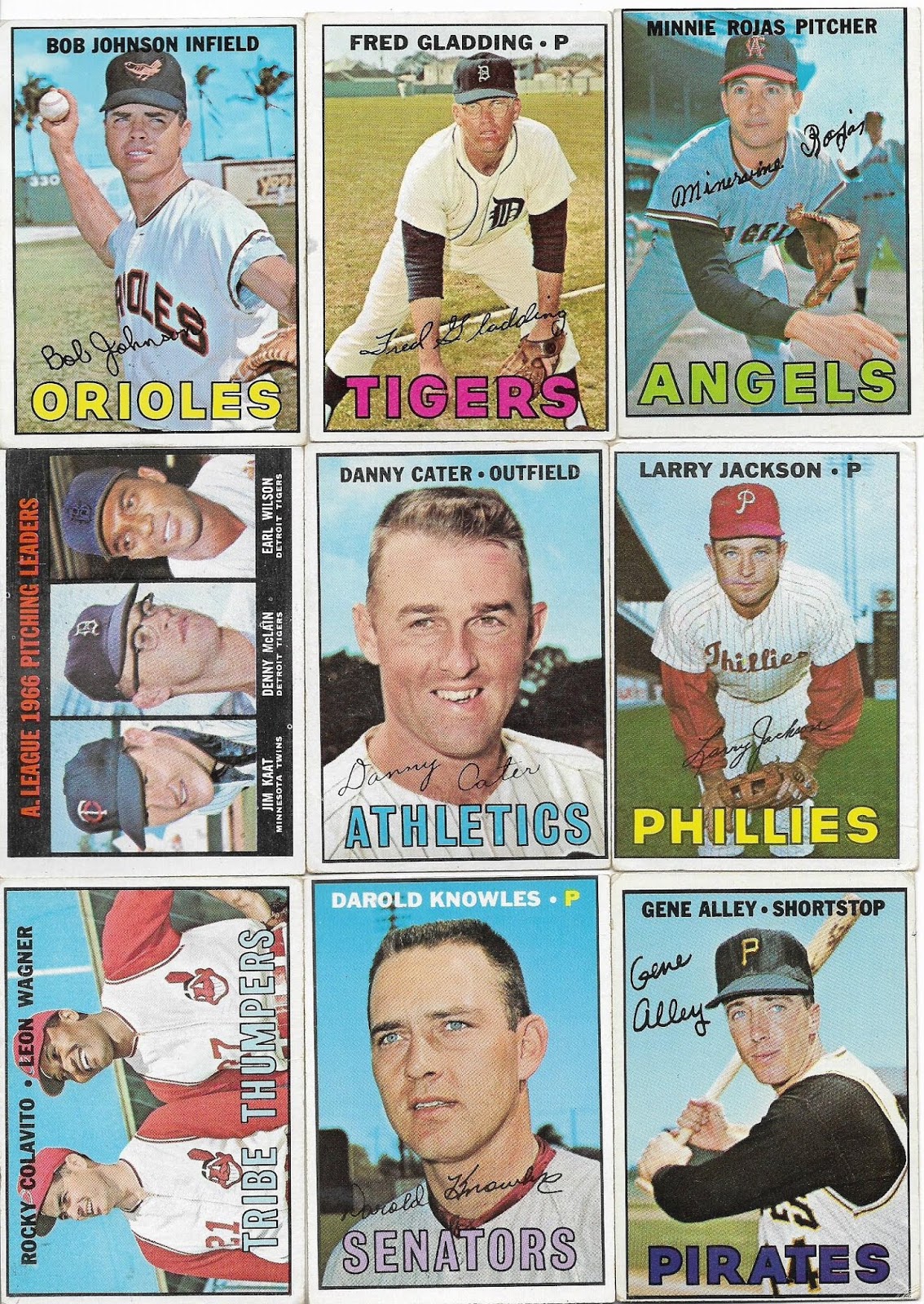 Nine 1967 Topps cards! Being a card blogger means living a strange world where you have dupes of these things. All cards are in pretty good shape for being 53 years old.

Six 1956 Topps cards with issues! Trimming! Creasing! Writing! Taping! Honestly, keep that 1956 kid away from these cards! But maybe somebody will enjoy the coolness of owning some classic beauties. 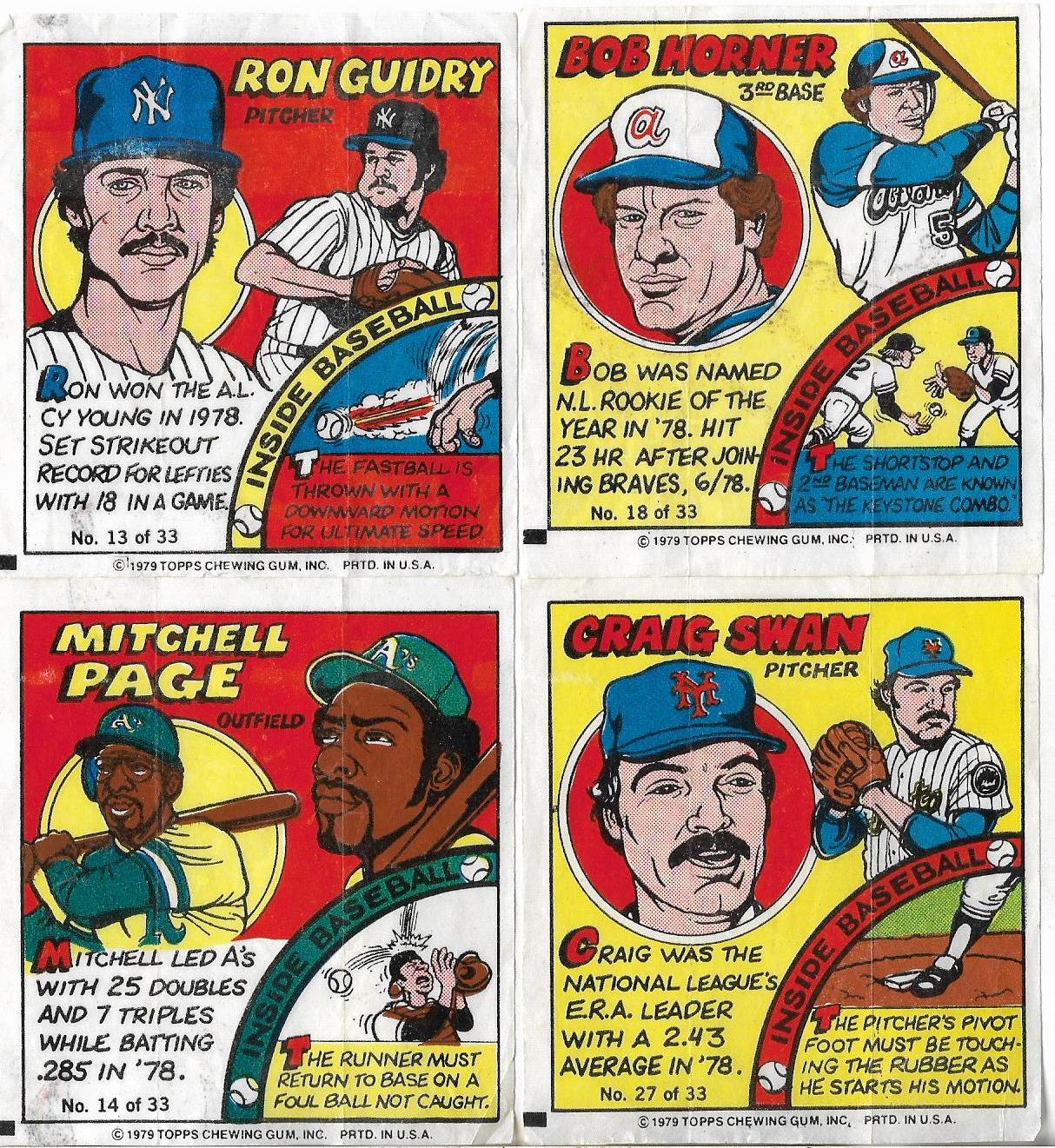 Four 1979 Topps Baseball Comics. These are pretty flimsy, but they are 1970s pop art through and through. That's why I love them. 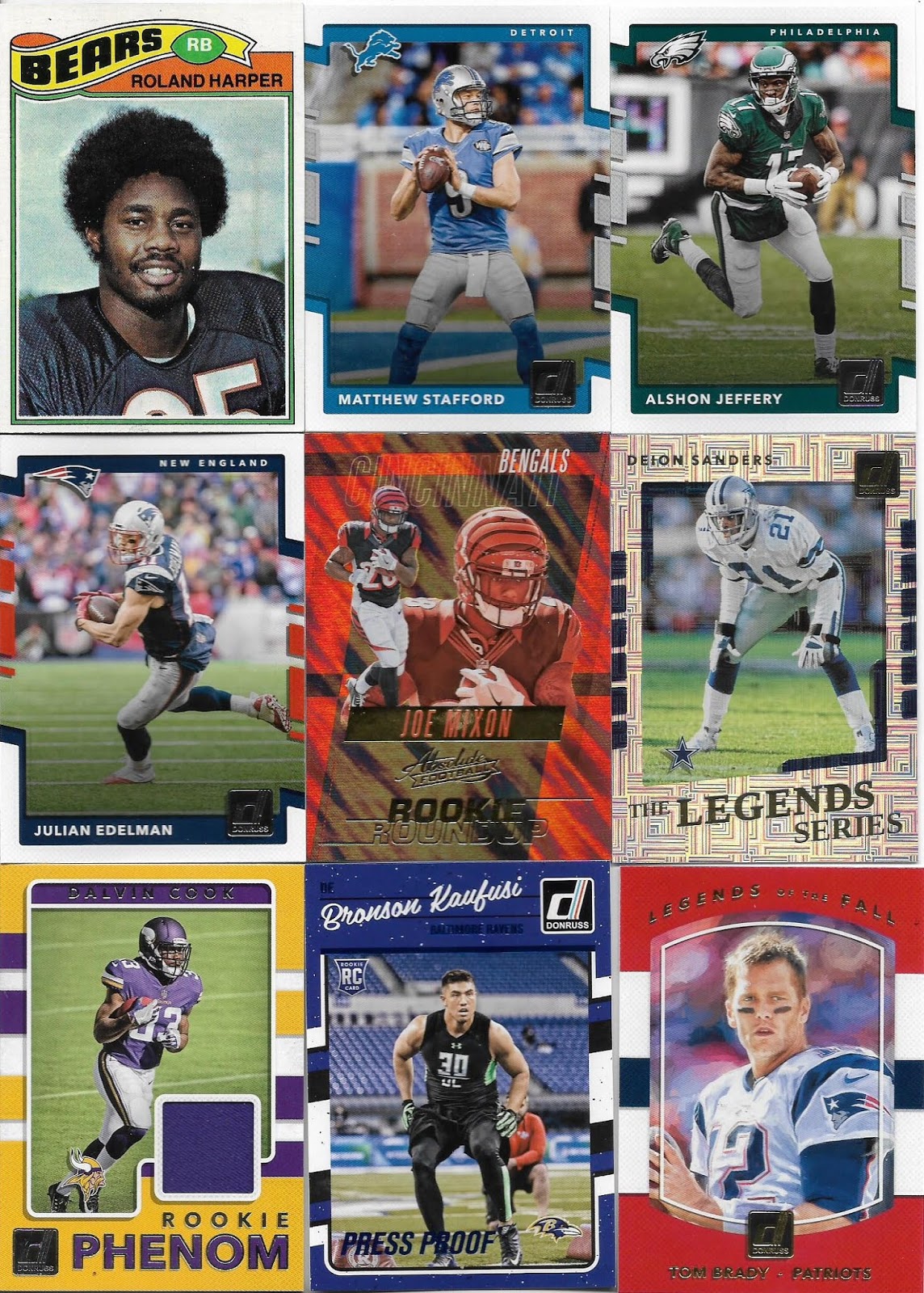 Hey, look! Football cards! I shouldn't have any Patriots in my house, especially those two guys. The Dalvin Cook card is pretty, but I know zero Vikings fans. 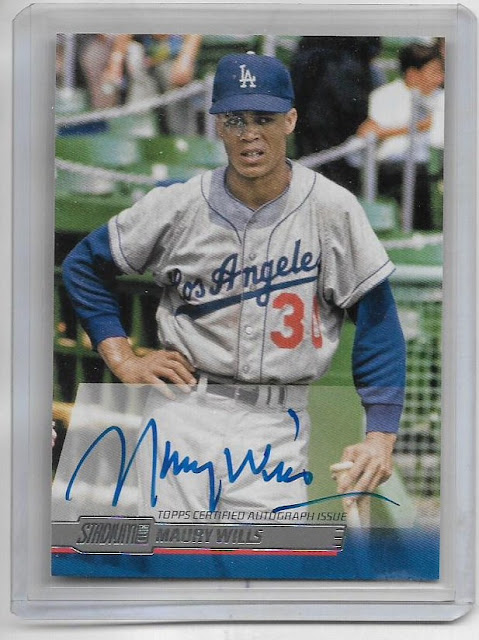 A 2014 Stadium Club autographed Maury Wills card. Back in the day, Nachos Grande pulled two of these for me. I somehow kept both of them for this long. ... Don't worry about the weirdness around Maury's eye, that's a top-loader issue. 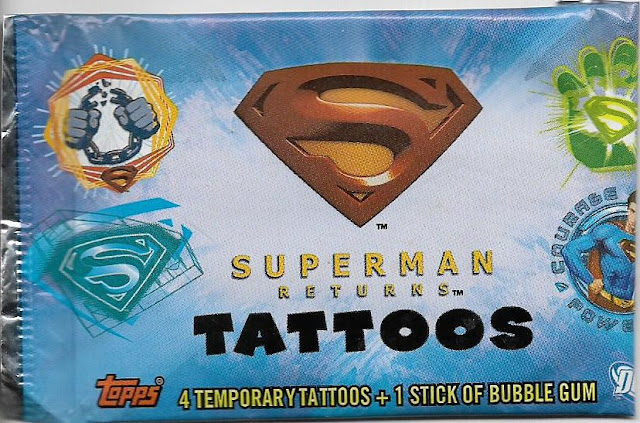 LOL, want a pack to open? This is about the only unopened pack in the house. If you have an urge to slap Superman tattoos on yourself, this is the best prize. 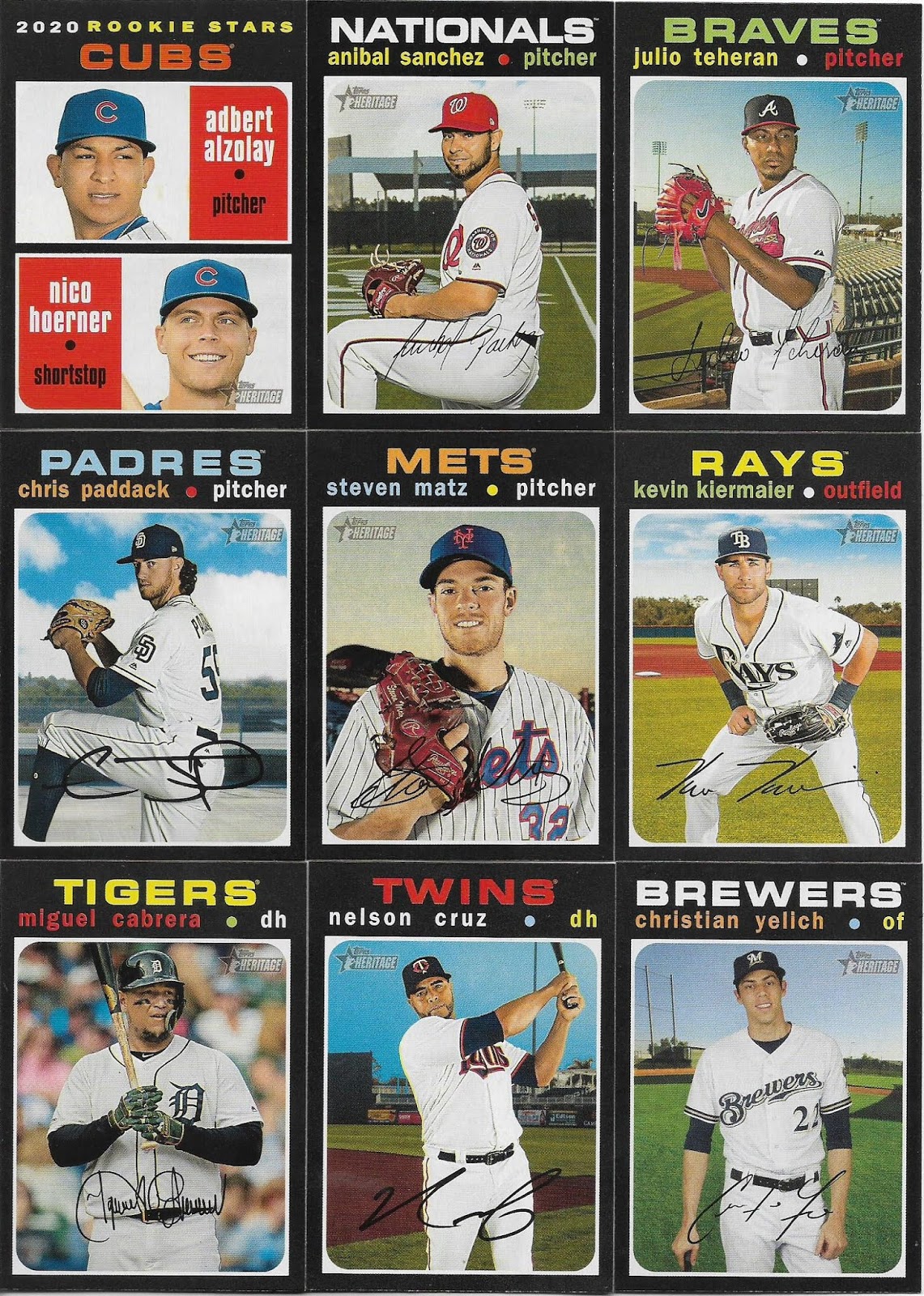 Nine notables from 2020 Heritage. You thought I'd never get to something current. Well, here it is. 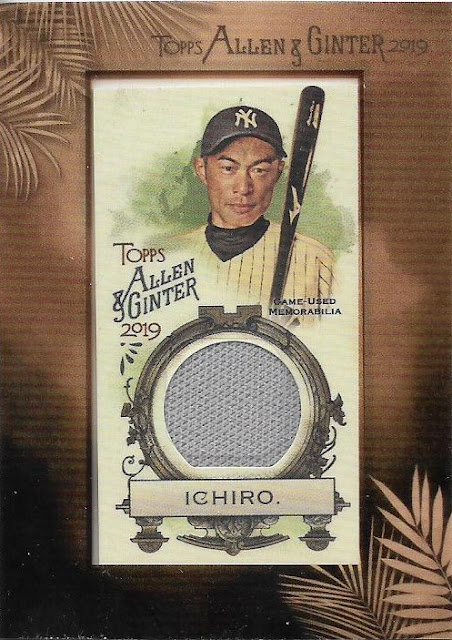 A 2019 A&G Ichiro relic. I pulled this last year. I'm still annoyed that it's Ichrio in a Yankees' get-up. But I know some people don't mind that. 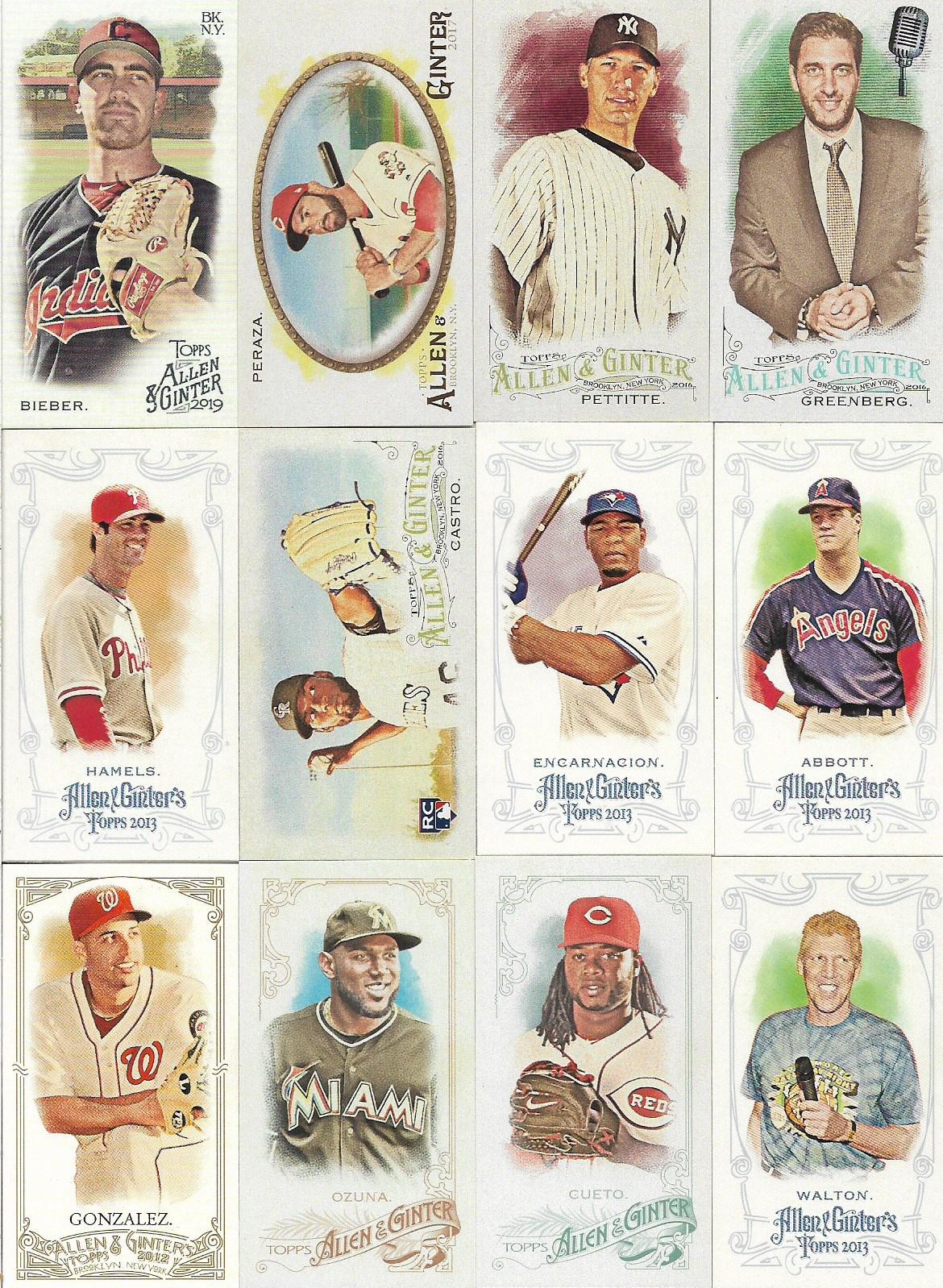 A 12-card lot of A&G minis. Minis seem to have fallen out of favor with current card bloggers. They were a lot more popular with the crowd that left. But even I don't have use for minis that don't fit in my frankenset binder. These are all available. 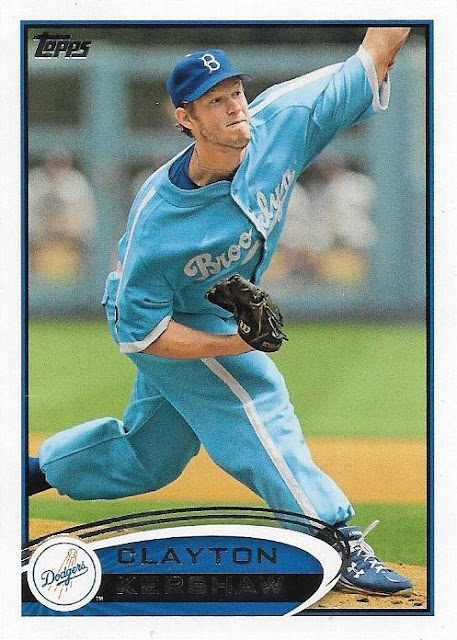 A 2012 Topps short-print of Clayton Kershaw in the classic 1940s Dodgers uni that looks about three sizes to big on him. 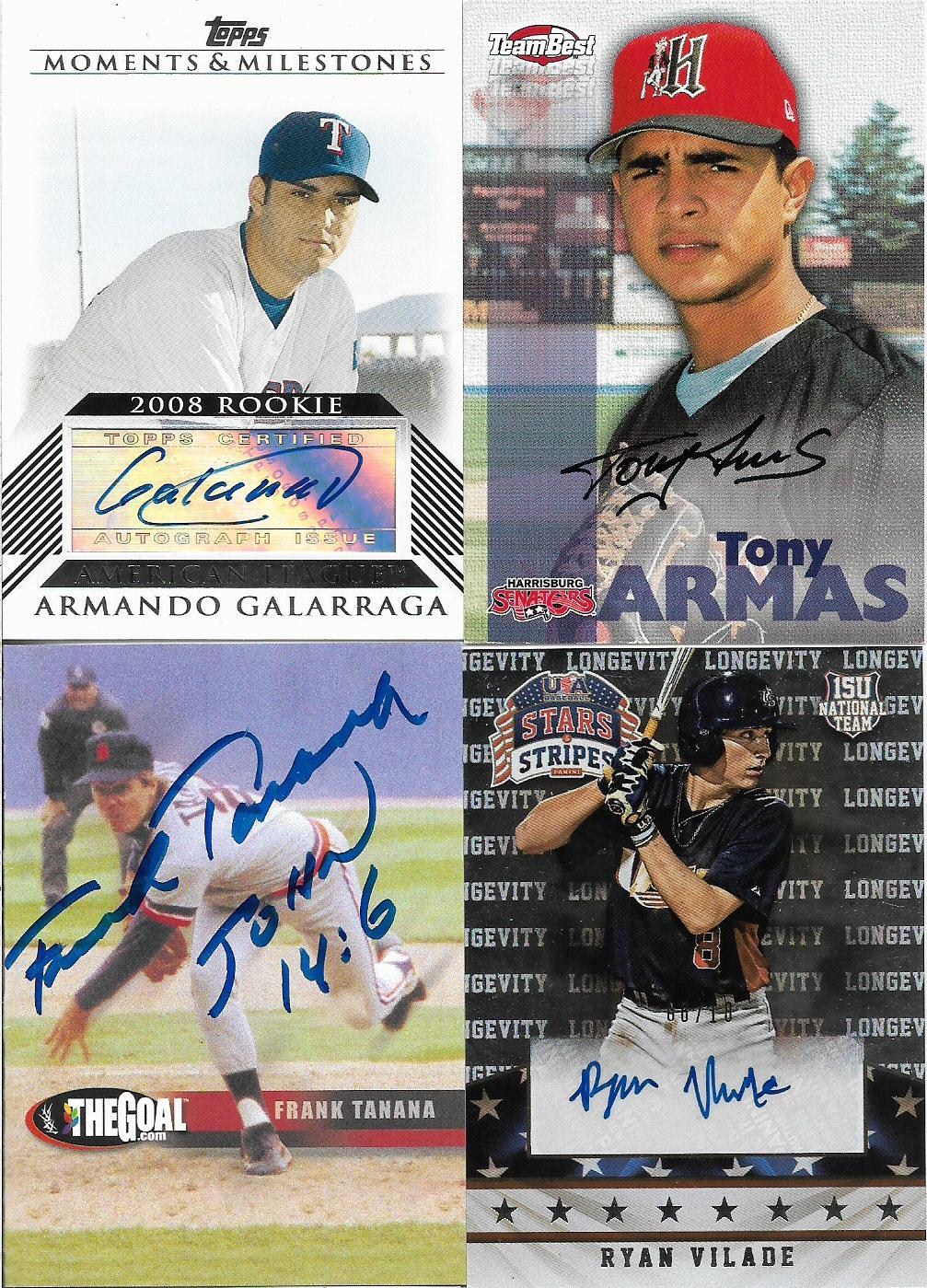 A four-card autograph lot. Well, the Tanana isn't a card, it's a religious fold-out thingy. But if you're a Tigers fan, it's cool.

So, those who I listed, claim what you want until there's nothing left to claim. I don't have addresses for many of you, so please email your address to: nightlite77@yahoo.com after you claim your prize.

As always, thanks for reading. Each time you mention to me that this blog is a welcome distraction in your life, I am honored. It means everything to hear that. I am blessed with a wide audience, and if I had the time and money, I would do this more often.

I hope you enjoy your weekend.

Jeff S said…
^Sounds like #8 has been vacated. I'll take that.

kcjays said…
As noted before, very generous of you to offer prizes. I’ll pass but thanks a lot for the offer.
I got on the internet and read about Campy’s bat throwing incident. Surprised that had somehow slipped past me.
Thanks again for your blog. Always a great read.
May 29, 2020 at 11:00 PM

Billy Kingsley said…
I didn't expect anything, but I will gladly take the Superman pack off your hands.
May 30, 2020 at 2:11 AM

GTT said…
I thought about commenting, but then didn't.

The Diamond King said…
Nobody grabbed #9? I guess this blog is mostly baseball readers! That shiny Deion alone almost got me, though I am extremely happy with what I picked. Thanks again Night Owl!!
May 30, 2020 at 11:16 AM

gregory said…
I'm a day late to the party, but somehow there are still a few prizes available? Cool! If #4 is in fact still on the table, I'll happily claim it.

Thanks very much for the generosity, and for writing so many excellent, informative, entertaining posts here!
May 31, 2020 at 6:22 AM

night owl said…
All prizes except No. 9 have been claimed.