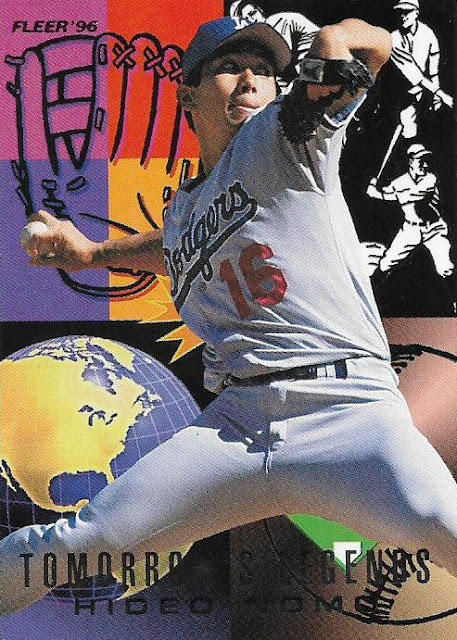 (If you haven't voted for your favorite Bert Campaneris '70s card in the last post, I invite you to do so). 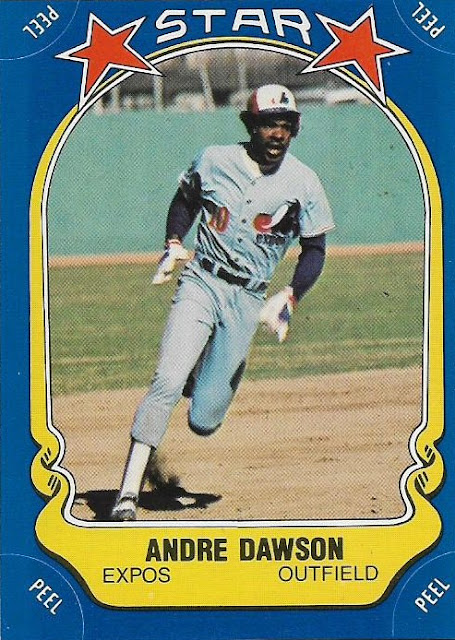 I won this key 1981 Fleer Star Sticker of The Hawk. I have since acquired several more '81 Star Stickers that you will see when they arrive. It's about time I completed this set, since it is full of players from my childhood and my sticker bias has to end, especially when they're practically cards anyway. 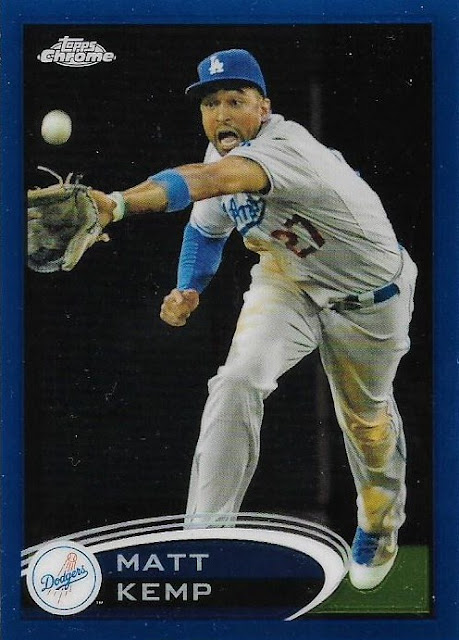 The other victory was this blue refractor from 2012 Chrome of former Dodger Matt Kemp. I got lucky with this as I was paying attention when the DK9 went up and I swooooped, as alert night owls do.

This card didn't scan that great, which will be a running theme in this post.

So, then came the contest, which was Big Fun Game in nature but also involved a betting element, using so-called DK dollars. So, not only did you have to worry about your freshly-won stuff being stolen but you had to worry about budgeting your fake cash. Holy smokes, do I have the time for all this thinking in my free time?

It turns out I did, although I'm still not sure how much DK dollars I left on the table. But that didn't keep me from getting cards! 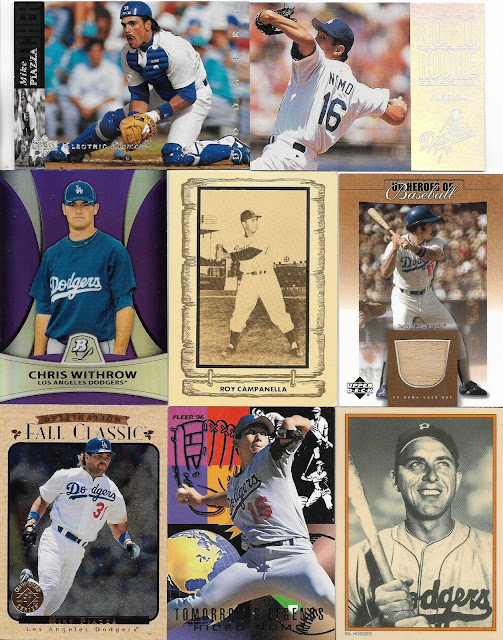 I made sure I won this contest, though, even though all of the above Dodgers I already own. (I probably will find a use for the Hodges, but anything else is available). DK said he'd be able to find a recipient for the Giants so he took those off my hands, thank goodness.

And I got my one card that I wanted: 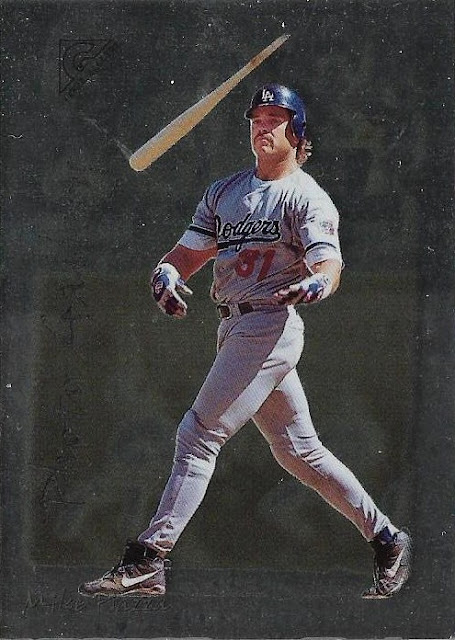 Flying bat greatness. But because it's a card from the late 1990s, it's both impossible to read the year it was made on the back and it scans like crap. 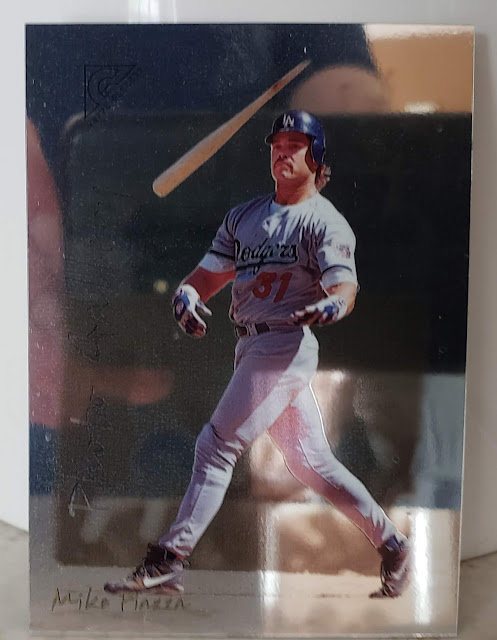 I tried to take a picture, but the mirror-effect of many late '90s cards makes that impossible, too, unless you want your reflection in the shot. 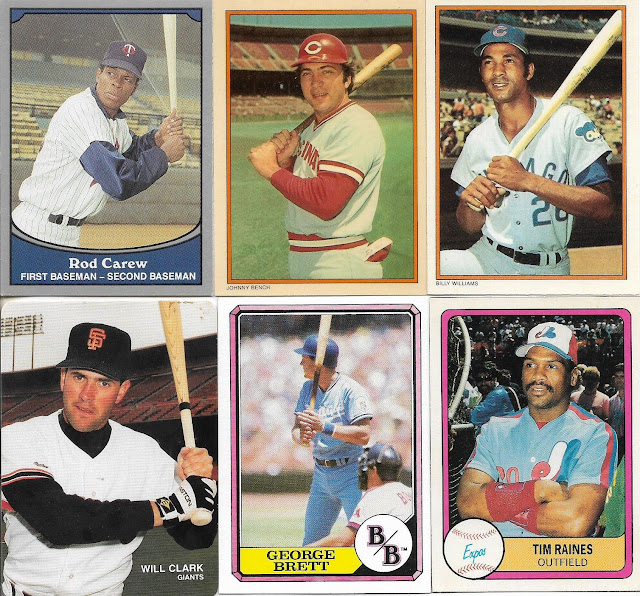 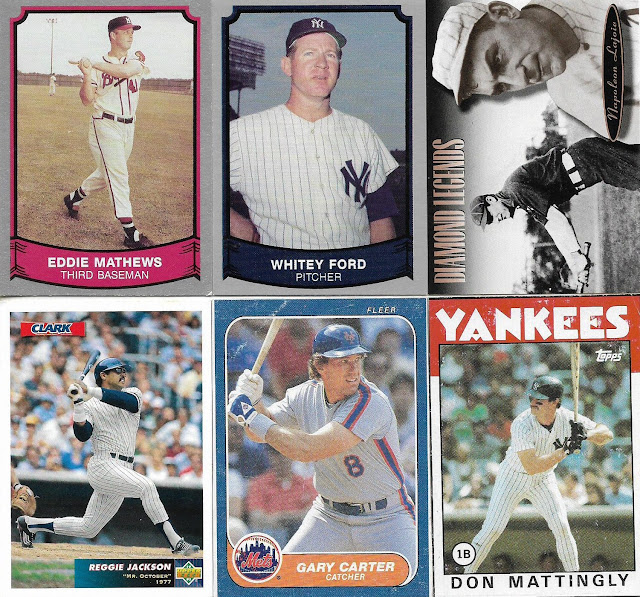 I actually didn't win this. Sports Card Collectors grabbed it but was nice enough to select only the cards he desired and allow me to have the others. Since I didn't care about the cards he wanted, I landed the above beauties! (Well, I wish he would've taken the Clark, somebody please get it out of here).

I wouldn't have bid on this but there were two cards that I wanted quite a bit, plus another one that I enjoyed getting. 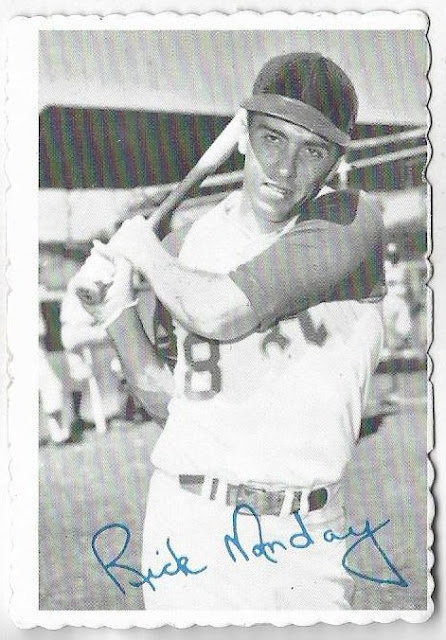 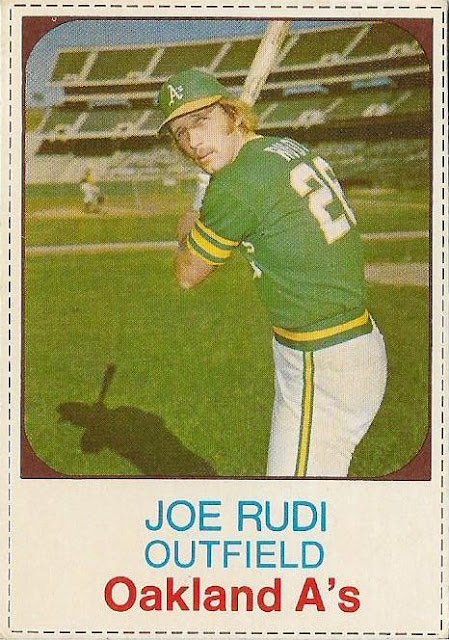 That's a super sweet 1975 Hostess card of Joe Rudi. Almost in immaculate condition. This is beautiful. 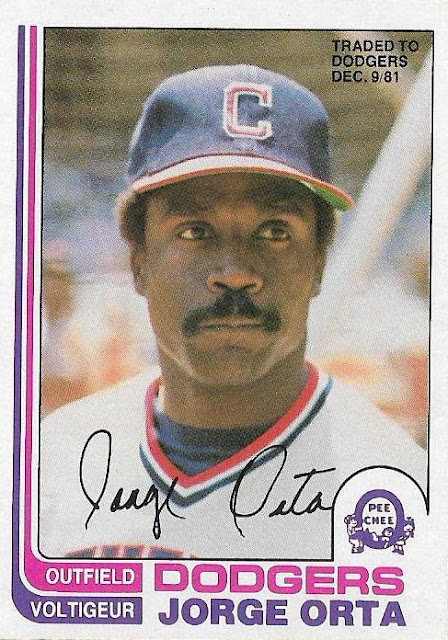 And, man, I nearly pulled a hamstring declaring I wanted this card. A Dodgers OPC from the early '80s showing the player in a completely different uniform with the OPC-trademark "traded' designation in the corner??

Much thanks for SCC for arranging that deal.


So, yeah, the return of The Diamond King has been pretty fun so far. Just yesterday he showed off his "Cuts and Colors," meaning cool-looking '90s/early '00s diecuts and colorful cards. He urged others to do the same.

Now, you know me. I'm not as fascinated by these as those who grew up in this time. But I'm not going to hide in my '70s clique and refuse to play a '90s game. I've got some of those cards, too, and I can respect them.

I'll show three of each: 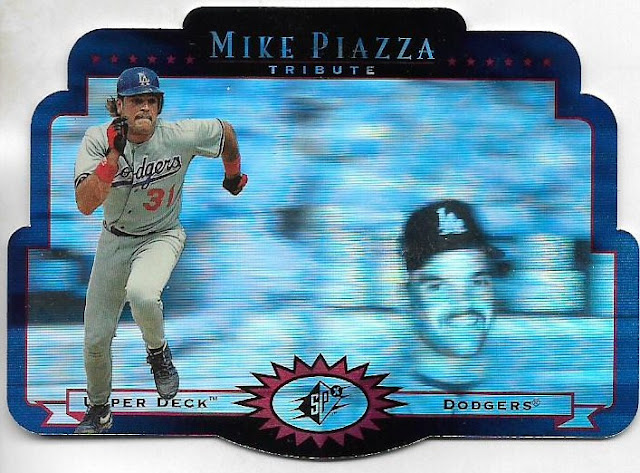 The 1996 SPx set had to be mind-blowing when it arrived. Heck, I found it weirdly awesome when I discovered it about 10 years ago. This is from the Tribute insert set. I think. 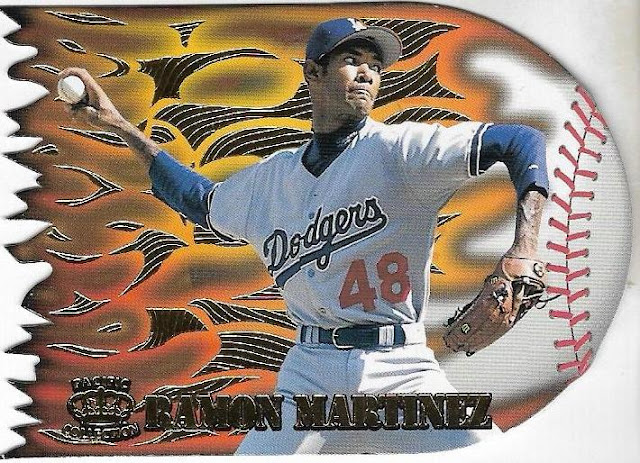 This is from the '96 Flame Throwers insert set. The flame edges make protecting the card a bit difficult, but it's not nearly as delicate as the '96 Topps Laser set. I curse that thing every time I update my Dodgers binder. 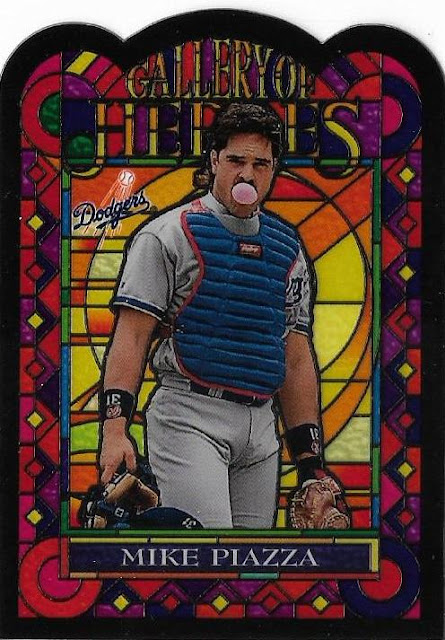 Probably my favorite diecuts from this time are the Topps Gallery Gallery of Heroes stained glass-themed inserts. This is from '96 or '97. I'm not going to try to read that fine print on the back.

This card doesn't look nearly as good as it does in person, in a well-lit area. You'll see how nice it can look in a minute.

But first I have to show the COLORS '90s cards I have. 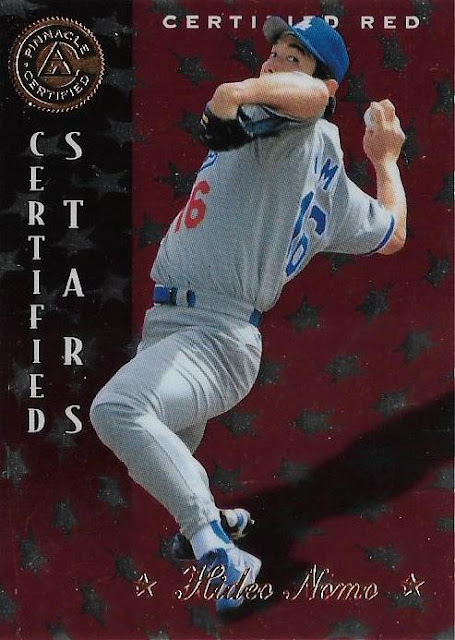 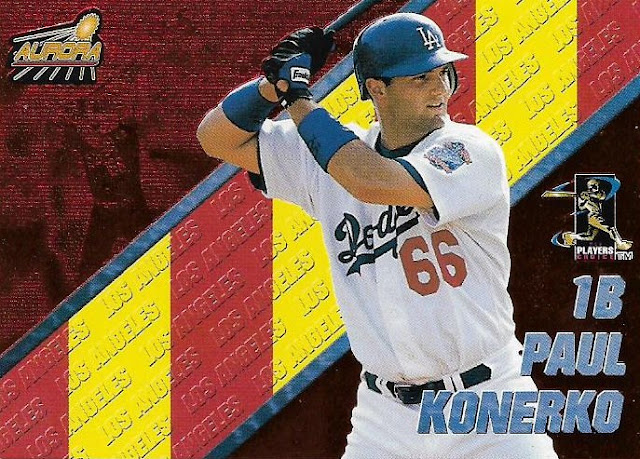 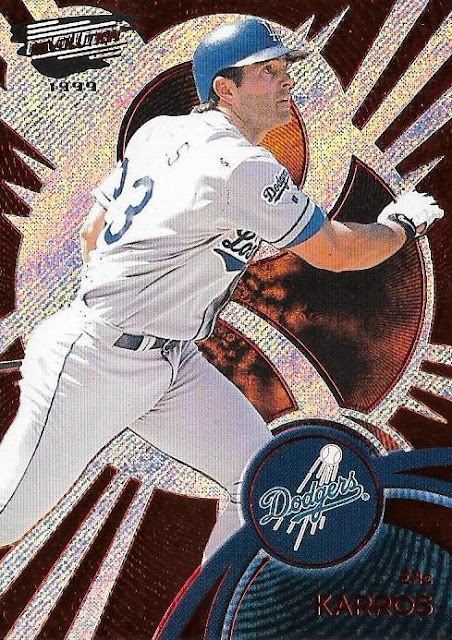 This was not by coincidence. An issue with 1990s cards when it comes to color is most of the time the "color" is either gold or silver (I wouldn't call those "colorful"), or there's a whole bunch of shiny that comes along with the card.

That makes for difficult scanning. I found some very red cards to try to counter that, but I don't know how well I did.

Let's see the photos I took of them to see if they turn out any better: 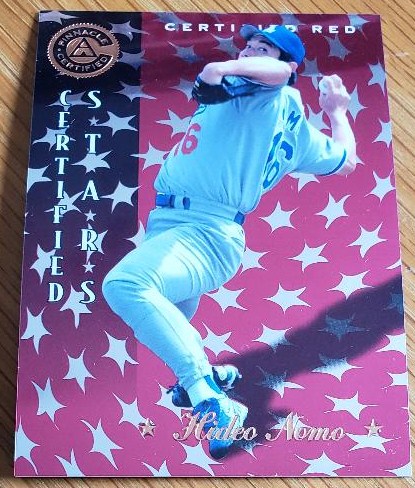 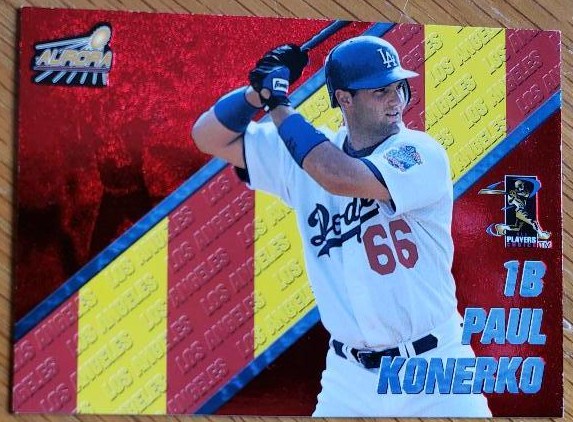 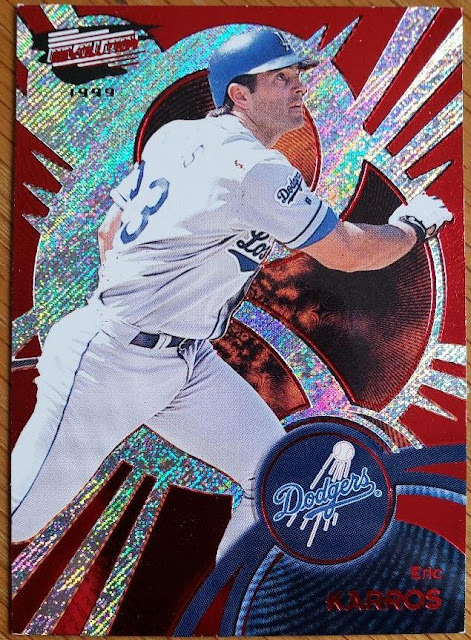 For my money, I'll take a 1975 or 1972 Topps card that's colorful as all get-out and you don't have to tinker with it with the phone or the scanner. It comes out of the box colorful and it stays colorful whether it's a sunny day or cloudy day or your summer is perpetually overcast, such as the area where I grew up.

But I have to admit: 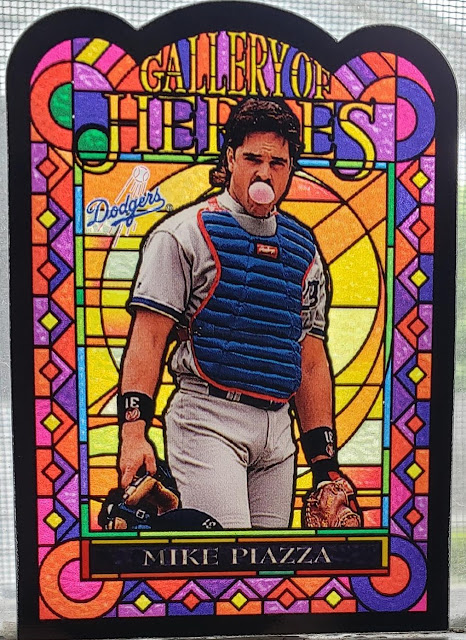 Jeff S said…
Love the 1981 Fleer Star Stickers. I'm partial to those blue borders. I'm pursuing an autographed set myself, and I'm up to 45 of the manageable 125 card set.
https://collectingcardsagain-mlb.blogspot.com/p/1981-fleer-star-sticker-autographs.html

bbcardz said…
Congrats on winning all of that Dodgers awesomeness and the other ones too!
May 28, 2020 at 8:25 PM

The Diamond King said…
Glad you liked the cards and thanks for the shout out. I absolutely love those Gallery of Heroes cards. Definitely not from the 70's though!
May 28, 2020 at 10:21 PM

Nick said…
If you're slow with claiming free cards, then I'm even slower because I definitely would've claimed that '81 Fleer Dawson sticker! Love that oddball lot as well.
May 28, 2020 at 11:55 PM

Fuji said…
Can't believe I didn't see that Rudi when we were playing that game. That card is sweet! The Gallery of Heroes insert is beautiful too. Just another reason I enjoy 90's inserts.
May 29, 2020 at 1:22 AM