My stamp of approval 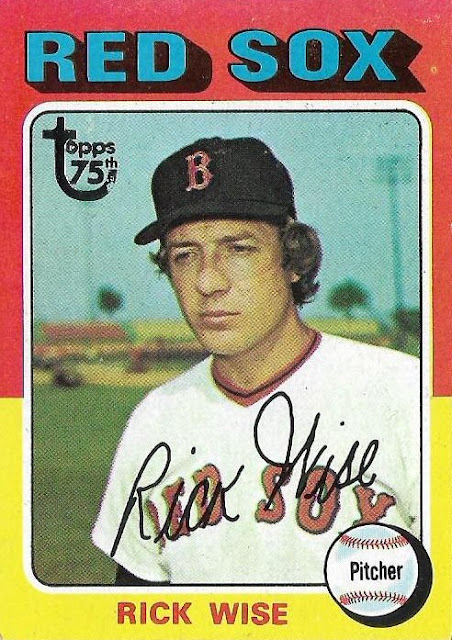 As I continue to gather stamped buybacks of 1975 Topps cards, my enthusiasm for the quest ebbs and flows.

Oh, I'm always enjoying it, without a doubt. I am thrilled that I've found an interesting way to continue to collect the first set I ever bought in packs as a 9-year-old, and long after I've completed the actual 1975 Topps set and the mini version.

But sometimes I still wonder why I'm doing this, mostly when I see the outrageous prices some demand for these buyback cards, when the same unstamped version -- you know, the actual card not marred by a foil stamp -- goes for much cheaper. How in the world does that make sense?

But other times, my zeal is through the roof. That's when the '75 buybacks are arriving rapidly and the players depicted are more than your average commons.

Recently, I received some 1975 buybacks from Sportlots. Their assortment isn't as vast as COMC (that goes for most everything actually), but I usually can find stuff on Sportlots that I can't find elsewhere. And I was pretty happy with the '75 buybacks available.

The first example is Rick Wise above. Wise was a solid pitcher for some bad Phillies teams and became nationally famous for hitting two home runs during a no-hitter he threw (a feat that MLB is now trying to ensure never happens again). I first came across him seeing this '75 Topps card, and it was one of my favorites that year. Wise threw in the 1975 World Series -- he won the famed Game 6 -- which automatically made him cool. 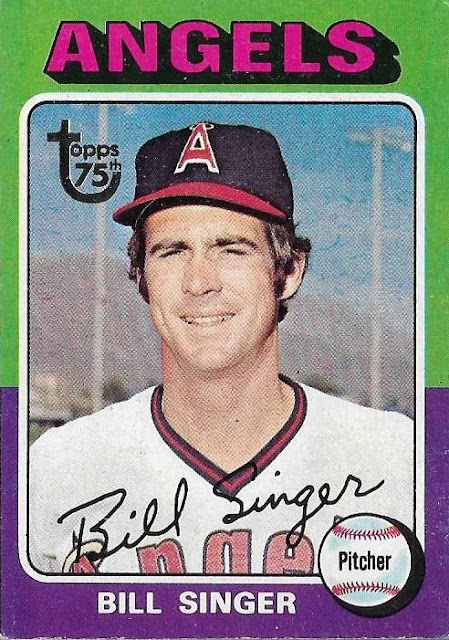 Another pitcher who was more well-known for a team from an earlier time. Singer also pitched a no-hitter, for the Dodgers, for whom he pitched for nine seasons. 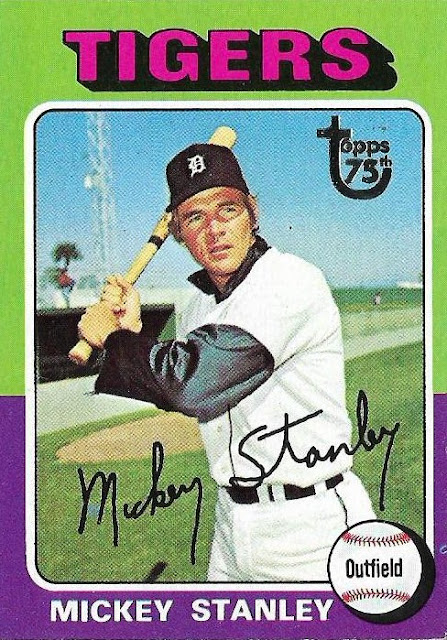 Mickey Stanley was a veteran of those great late 1960s/early 1970s Tigers teams. He was on his way down at this point but this is a card I pulled out of the first three packs I ever bought in 1975, so I'm very happy to own the buyback. 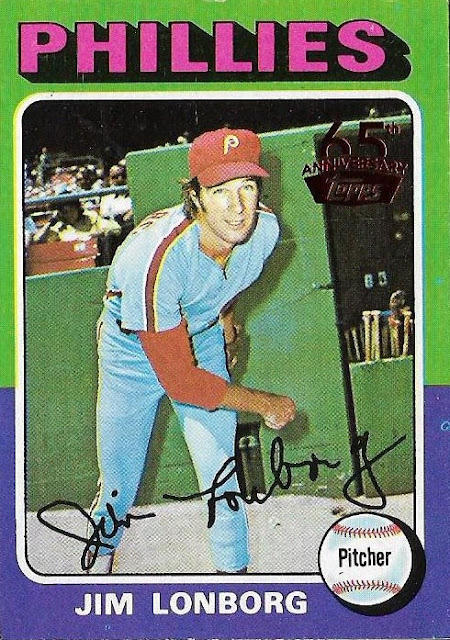 Staying with the green/purple Incredible Hulk border design and staying with another star from the 1960s. Lonborg will always be remembered for his 1967 season with the Red Sox. This card was stamped in red foil, which is supposed to mean something, but it actually doesn't, except that sellers can attempt to hoodwink collectors into paying more money for a different-colored stamp. 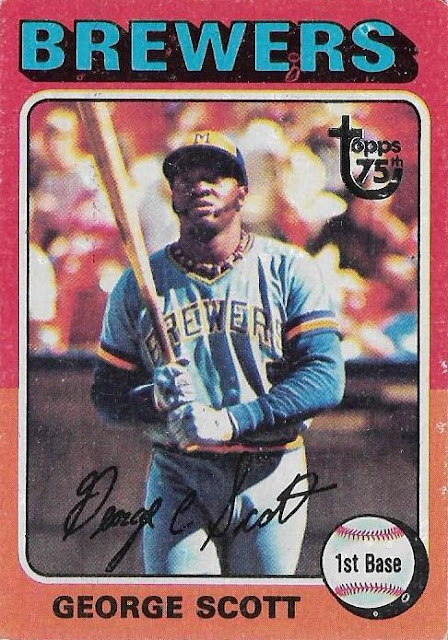 A hero of my childhood "Game of the Week" baseball-viewing on Saturdays. This is a marvelous get for my buyback quest as I've seen it listed for stupid prices on COMC. 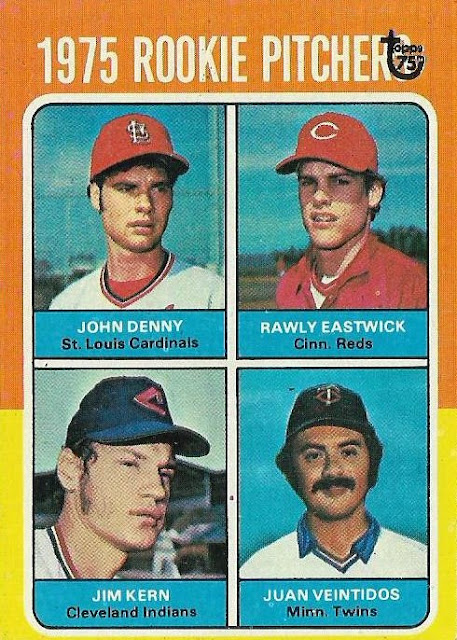 Here's another milestone for my buyback set, the first multi-player rookie card that I've acquired in buyback form.

There just aren't a lot of these out there. I've seen a Gary Carter stamped one. But nothing of Lynn or Rice or Hernandez. This selection isn't anything to dismiss. Denny, Eastwick and Kern all enjoyed notable careers.

So, those were my Sportlots pick-ups. But I didn't stop there. 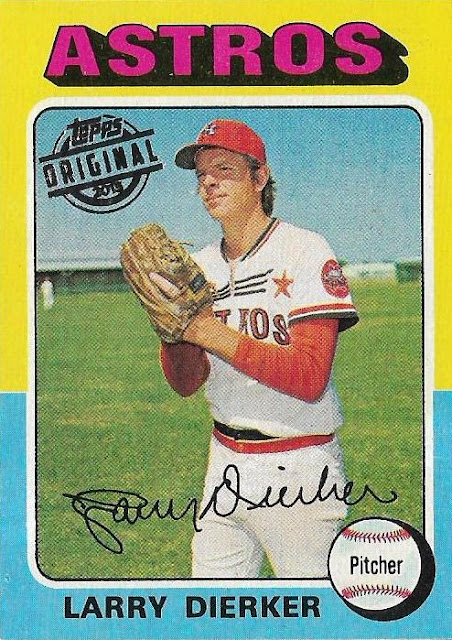 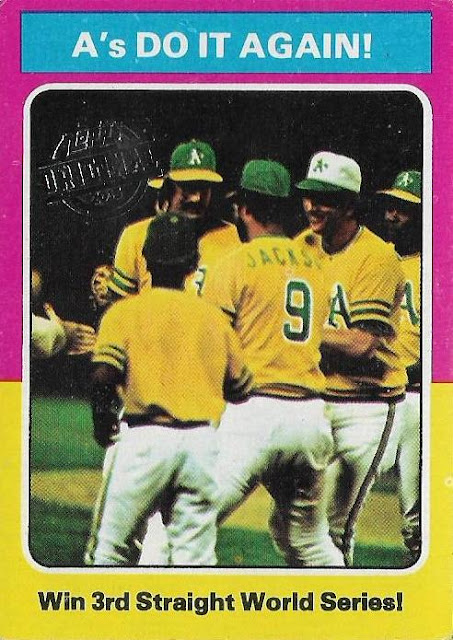 By advertising my Sportlots buybacks, I was able to trade for two more needs with a fellow Twitter collector. TJ was nice enough to send me these and, significantly, TJ is attempting a 1978 Topps buyback set!

Aside from Shoebox Legends attempting a 1990 Topps buyback set, I was the only person I knew doing something this crazy. So it was good to see somebody else of similar mind. And, since I don't give a speck about buybacks unless they're from 1975, I easily handed over a couple of 1978 Topps Dodgers buybacks to TJ complete the trade!

The World Series card is key as I once figured these would be tough to find. But I've done pretty well with them. I just won another WS buyback from ebay that I'm waiting to arrive.

And, speaking of ebay, I recently landed a couple more '75 buybacks from that site! 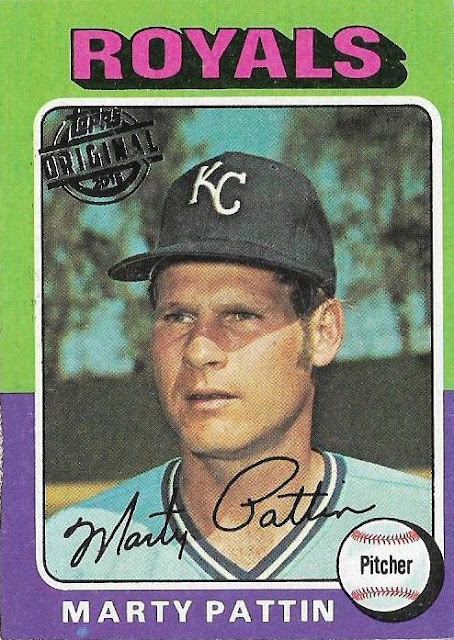 This just came in the mail today. And, best of all, I was able to remove this card from my COMC cart because I spent much less on ebay!

My COMC cart includes several needed '75 buybacks. Once COMC starts shipping cards out regularly I'll be able to go over 400 buybacks from the set. Man, I don't like waiting for that. 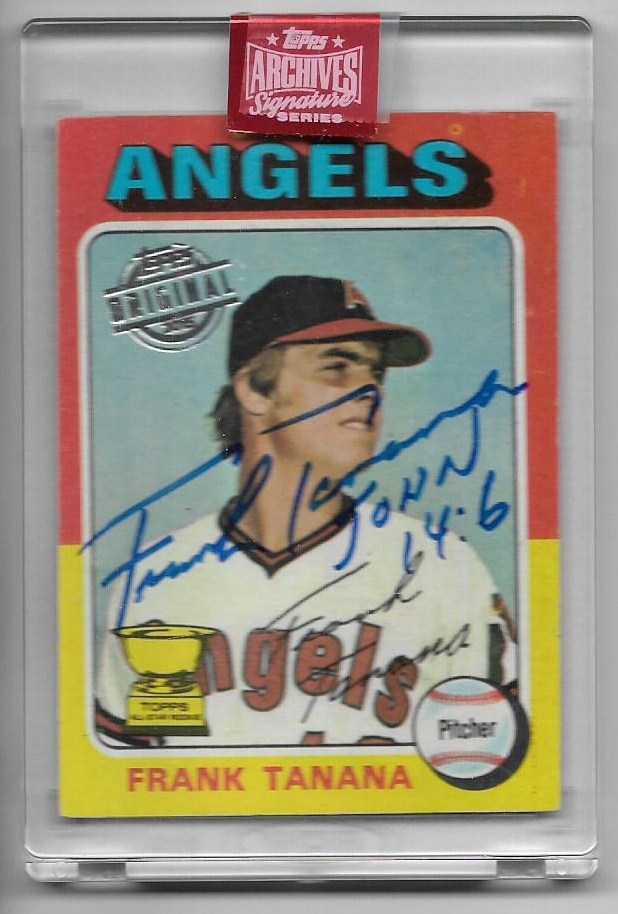 This is my second autographed '75 buyback after the Bill Buckner.

I figure I'll have to do this from time to time to obtain some of the more noted players in the 1975 set.

Unlike the Buckner, this card actually features the buyback stamp, so I will have no problem busting this card out of its case to go with the other buybacks. I'm still not sure how to display the Buckner buyback.

I got a good deal on the autographed Frank Tanana. It's his first solo card, the rookie cup and all. It's also one of my favorite players from when I was a kid. But I wrote about that before.

Tanana is one of the great interesting stories of the '70s and '80s. He started out as a fireballing, wild man, chasing skirts and throwing strikes. Then after some arm issues, he became a junk ball thrower and a playoff race hero. And he found religion. It was quite the transformation both on and off the field. 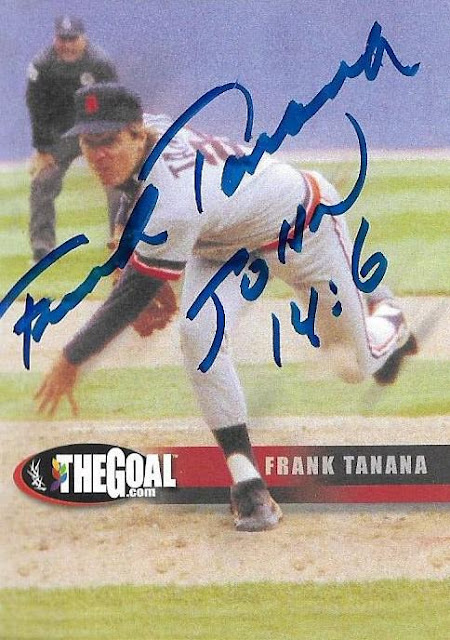 The seller sent along this signed booklet from Tanana with a picture in his Tigers uniform. It's a religious pamphlet and I don't mind athletes adding bible verses to their signatures and the like. I go to church, I understand the different journeys people take. And it completes the Tanana story nicely.

Listen, I still think buybacks are weird and it's outrageous that people think they can sell the cards for more, when actually the stamp damages the card (Topps is actually placing the stamp on the player's face in some cases). But I'm super happy I was able to collect them in a way that made sense to me.

And in that way, these buybacks get my stamp of approval.

Brett Alan said…
It certainly is nice to see bloggers taking a dumb idea--buybacks--and turning it into something good with these set collection and Frankenset attempts. I hope against hope you'll be able to complete this set. (I'd give SL a better shot just because there's nothing in the 1990 set that's as sought-after as the key '75 rookies, assuming you don't count the Frank Thomas error as necessary to complete the set.)

The kerning (spacing of the letters) on that Marty Pattin is really weird. I hope I'll remember to check in 2024 to see whether they reproduce that on the corresponding number in Heritage.
May 15, 2020 at 10:42 PM

GCA said…
Yeah, you got lucky with that four-player rookie card that the stamp was so small it fit on there without being pasted over someone's face. You would think there would be quality control for that sort of thing.
May 15, 2020 at 11:17 PM

Chris said…
I'm amazed you've found so many '75 buybacks, and impressed that you're still chipping away at a buyback set. If it's possible I'm sure you will get there. (As tough as it would be to see a stamped Brett or Yount RC I do hope they exist, for your sake.)
May 16, 2020 at 1:46 AM

Fuji said…
I enjoy collecting buybacks, but the seller's asking price has to be reasonable. That A's championship card is fantastic. Also... that's pretty cool that you were able to pick up that John Denny rookie card. I remember him winning the Cy Young Award.
May 16, 2020 at 11:19 AM

night owl said…
Condition is across the board. Many are in amazing shape, which makes me sad that it was stamped. But one of the great parts of this project is I don't care about condition. I have some really ragged ones and it doesn't matter.
May 16, 2020 at 4:56 PM

Jafronius said…
Hmm...would it be possible that at some point you would decide to get all of the different buyback stamps? Like if there was a Topps Original buyback George Scott available would you get it because you just have the old Topps logo buyback?
May 17, 2020 at 8:32 AM

bryan was here said…
As far as the Marty Pattin spacing discrepancy, I think the Rod Gilbreath also has the same issue.
May 18, 2020 at 12:17 AM