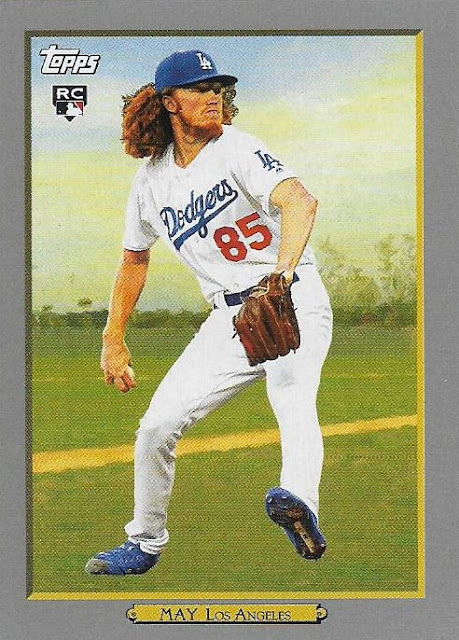 I was scrolling through the Twitter this morning and coming across various May Day references as one does on the first of the fifth month.

I'm not one to get into political meanings of holidays, I much prefer the whimsical, and fortunately there was some of that to see on the first of May, too. One referenced all the cards of baseball players with the last name of "May" that played during the 1960s and 1970s. That's always been cool to me and I pointed it out at least a couple of times on my 1975 Topps blog. Lee May, Milt May, Carlos May, Dave May, etc.

But it didn't dawn on me until hours later that the Dodgers have their very own May celebrating his day today, and I have several of his cards from this year in my very own collection.

I've already mentioned that Dustin May's Turkey Red card this year (above) is an early candidate for Card of the Year. That thing is phenomenal. And the same goes for other 2020 cards of his that I've acquired: 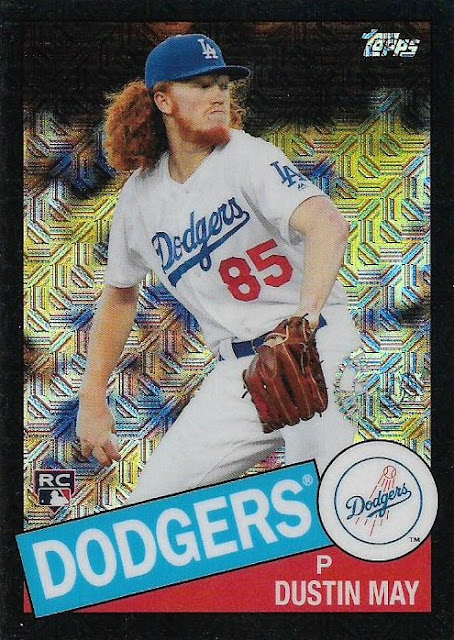 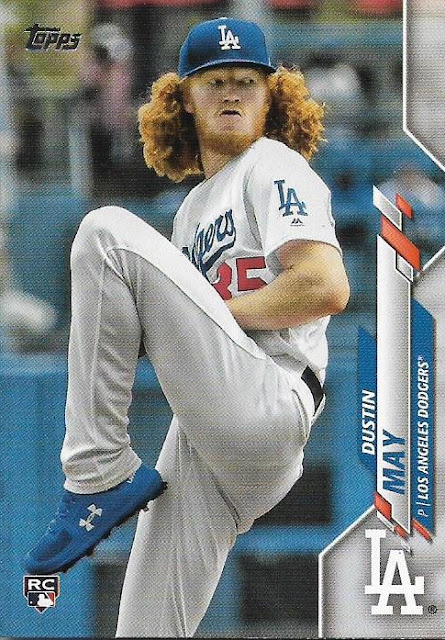 That Red Beard/Afro look makes these some of the most memorable cards of the year. And if May ever gets on the mound this year to show what he can do, it's possible his rookie cards will soar in price beyond the already unreasonable requests some are asking for his cards. It's a double-whammy, rookie card and all that red.

I recently received two more 2020 cards of May from Max at Starting Nine. 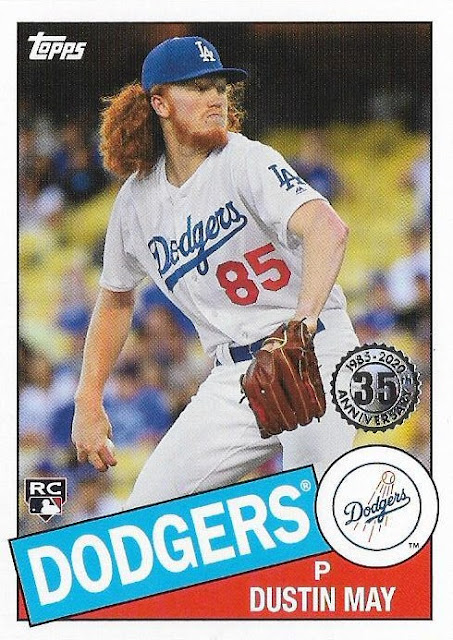 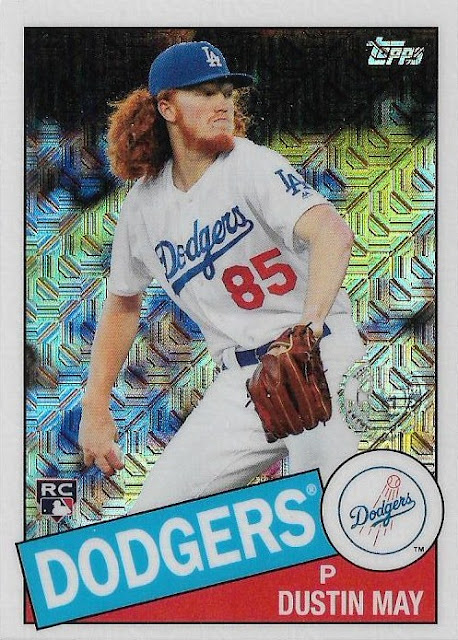 I understand it's three versions of essentially the same card. In fact, it's probably four versions as that Turkey Red pose sure looks like the same wind-up position as the three 1985-themed cards.

But I don't care this time. I'm nothing but thrilled for having four of May's free-flowing, fire-hair cards on May Day!

If Topps ever gets any more new cards on store shelves, there could be a whole year of chasing May's orange curls in pack after pack and set after set. It will be an entire year of May. Not May Day, May YEAR!

Max also sent some other cards that didn't feature any wild-man hair. 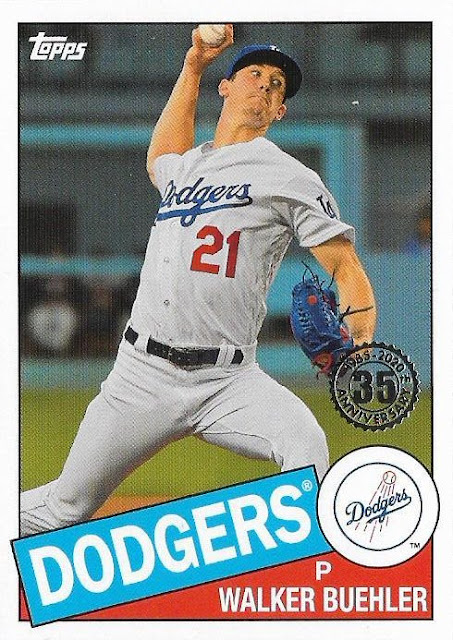 There's another needed '85-themed card of another Dodgers pitching wonder. 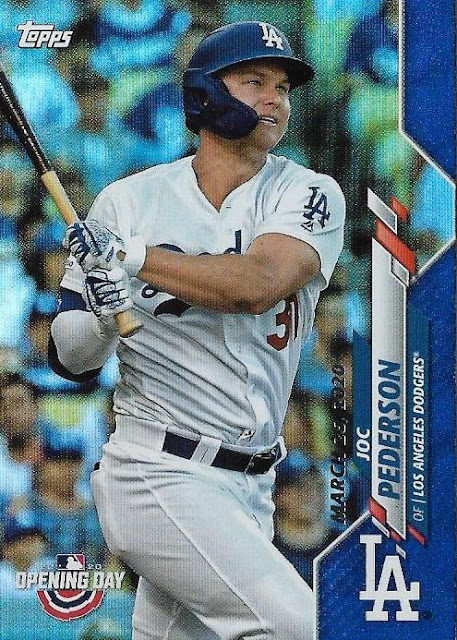 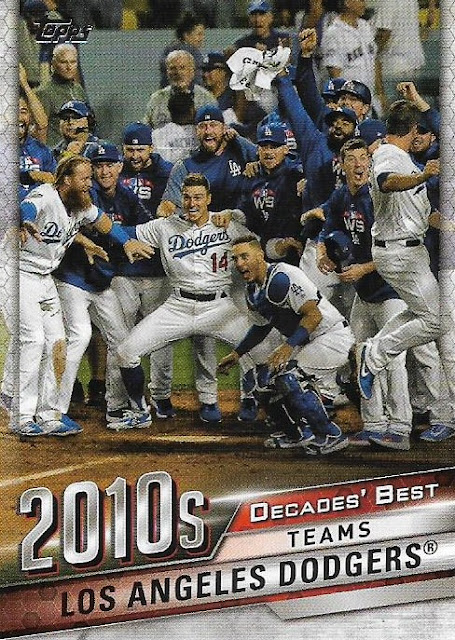 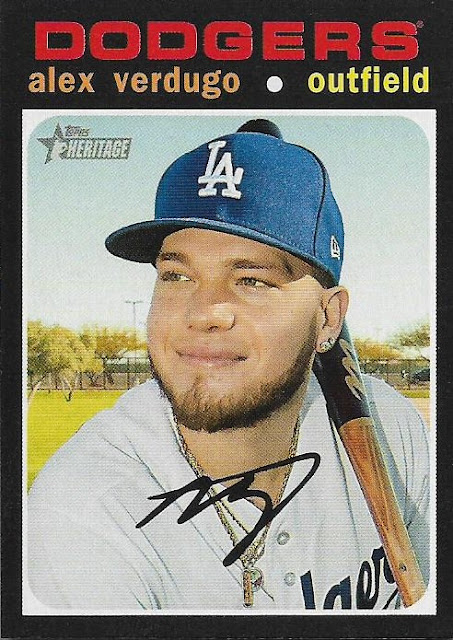 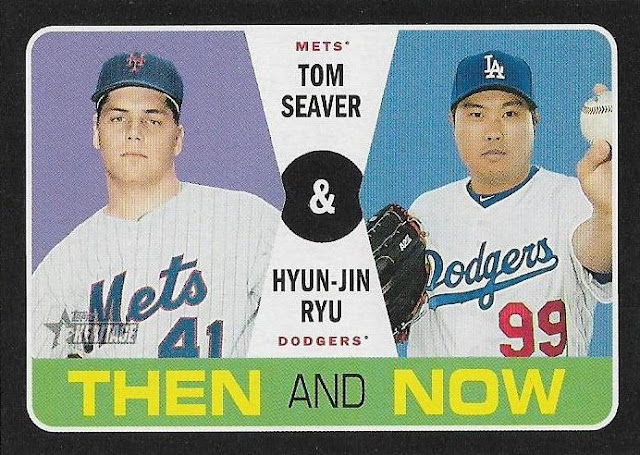 More 2020 cards that will fit neatly into my collection. It's nice of Topps to recognize the Dodgers' dominance in the last decade -- seven straight NL West titles and all.

The Heritage cards are in my collection already, but if I am going through with this set-completion bid, then they will be quite handy, as Verdugo's an SP.

The last card of Max's that I'm showing is nothing like any of the other ones and when you see it, you'll know why I saved it for last. 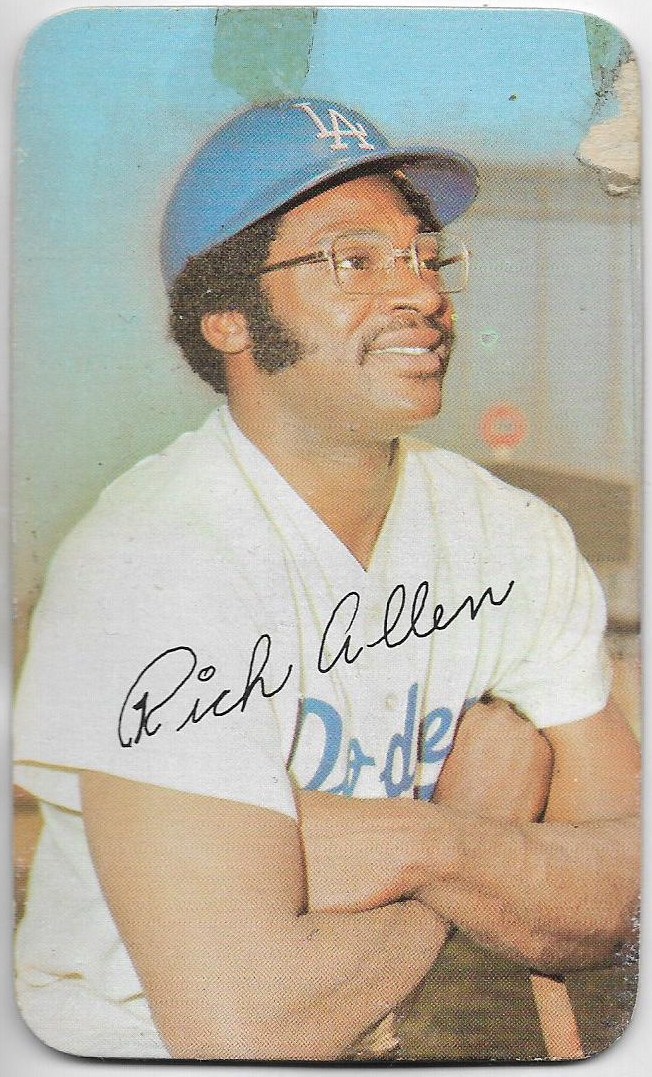 This is the last 1970/1971 Super card that I needed for my Dodgers collection. It came about in quite a serendipitous way.

Max had acquired several Topps Super cards and asked if I was in need of any Dodgers. I told him that the only Dodger I needed was Allen, whose stay was brief with L.A., but that's what makes his few Dodger cards so popular.

Max said he didn't have that card, and I didn't expect him to. No problem at all.

Then a week or so later, Max contacted me again. He actually did have the Allen Super card. That is some fast work! And now here it is. 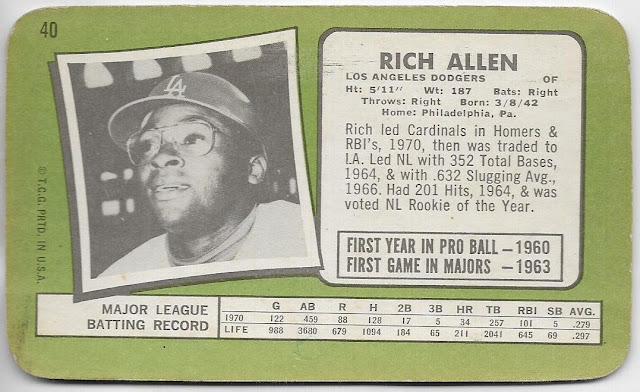 It sort of puts all my babbling about the May cards to shame.

May may be having his day or his month or his year. But I think Allen is working on 50-plus years and counting, thanks to cards like this.

Elliptical Man said…
Voting for the Topps base of May.

Fuji said…
That Richie Allen Topps Super is awesome! 2nd post in less than 24 hours I've seen regarding these thick oversized beauts. I just added the Bart Starr to my eBay watch list. I might need to hunt down some A's too.

acrackedbat said…
that wild hair! I should put a copy of this in the Fuzz binder!

jacobmrley said…
I am obsessed with those stupid Giant 1971s. I keep buying them. Someone please stop me. I need to eat. I need to pay rent. I am not working. I am going to be on the streets clutching big ass baseball cards. HELP!
May 5, 2020 at 12:19 AM