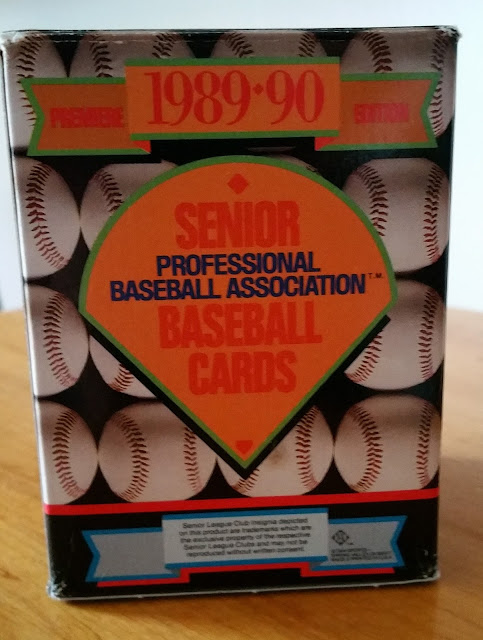 The underlying reason behind my recent quest to pursue 1980s Fleer sets (and some of the early '80s Donruss sets) is a continued mission to connect with the baseball players who were in the game when I was a kid.

I'm not in this hobby for the dudes that play today. As much as the current hobby thrives on Judge and Trout and the hot rookie du jour, that does very little for me. I'm not even in this hobby because of Kershaw or any of the current Dodgers.

So, with most of the Topps sets completed from my childhood, I'm searching for other avenues. Fleer is at the top of the list. So is Hostess and Kellogg's 3-Ds. Beyond that, I'm always on the lookout for oddballs that relive the good old days of 1975-85.

Recently, Johnny from Johnny's Trading Spot sent out a bunch of goodies to several collectors. I was one of those lucky people. I can't possibly put everything he sent in one post without making it a 3-day project, so you're going to see several posts that include cards that he sent.

Many of those cards reconnect me with baseball of my youth. And one of those is a collection of cards from one of several sets devoted to the short-lived Senior Professional Baseball Association of 1989-90. 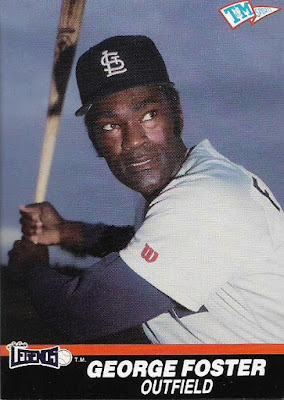 The almost-complete set that he sent is the one made by something called T&M Sports. More familiar companies, Topps and Pacific, also devoted sets to the Senior Professional Baseball Association, but I prefer the look of this set (the Topps set has that relentless wood paneling theme, dammit).

The set, issued to celebrate the first year of the league, in 1989-90, is 130 cards and 95 percent of the people pictured in the set are folks I followed during my childhood and teenage years. 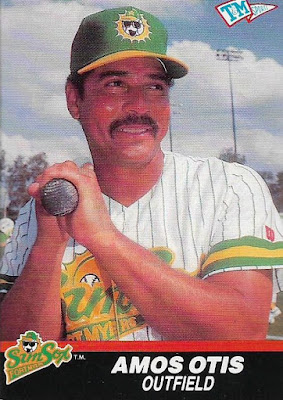 I don't care that the uniforms are unfamiliar. This is another opportunity to own a card of my legends. The George Fosters and the Amos Otiseses. 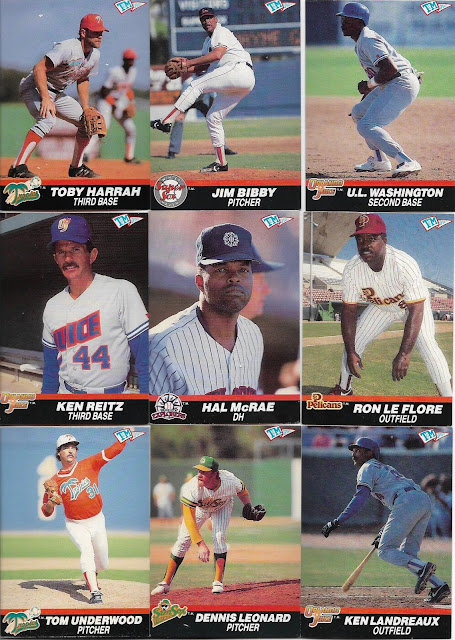 Every one of the players shown here was a favorite when I was a youngster. What a hoot to see them playing again, one last time. 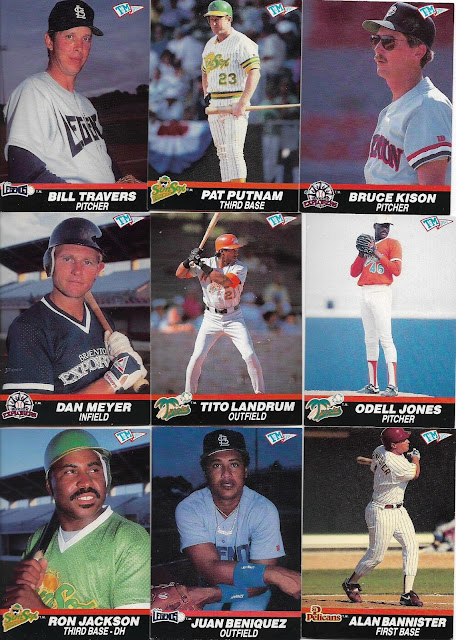 Here are nine cards of players that probably mean almost nothing to someone under the age of 40. Too bad for them. These were all guys I collected on baseball cards in the late '70s/early '80s. They all speak to me. In fact, I'll give you 10 Paul Goldschmidt cards for one Juan Beniquez card that I have never seen before.

What a rush it is to see these cards for the first time. 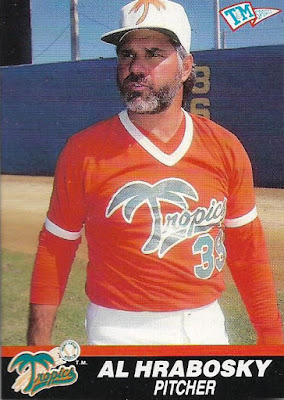 All the characters from that time period are here. 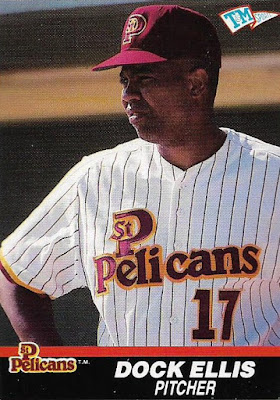 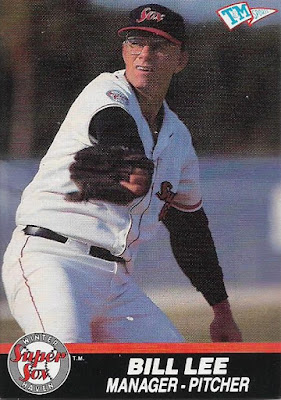 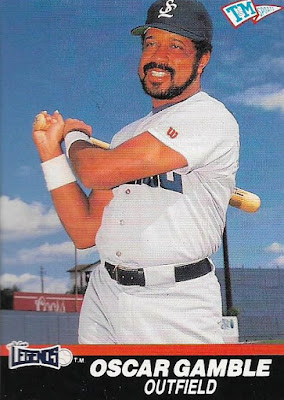 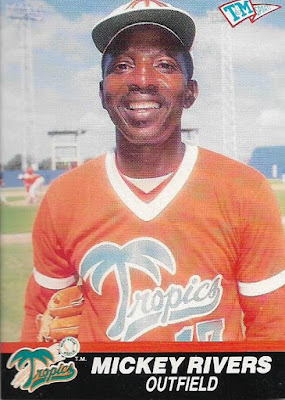 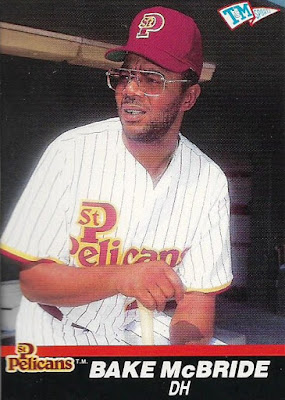 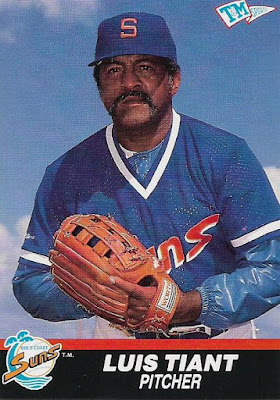 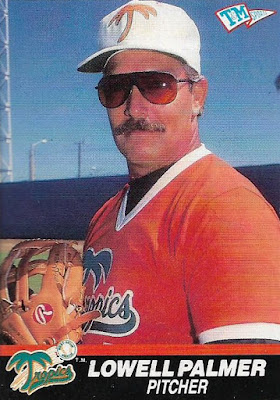 With so many colorful figures in the league it's a bit of a mystery why it folded in the middle of its second season.

The SPBA was based in Florida and featured eight teams in its first year. Born from the concept of "there's senior golf so why not senior baseball," the league struggled to draw fans from the start in the winter of 1989 and was toast by December 1990.

I personally think the league was wasted on Florida. It's very much of a football state, despite its spring training status. But the old dudes aren't going to play in the snow are they?

I would have jumped at the chance to buy tickets for these games. Who cares if the players weren't as good as when they played in the majors -- did you see Cecil Cooper on the field?

Holy heck, I'd be in heaven. 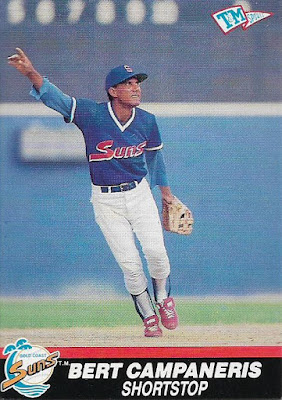 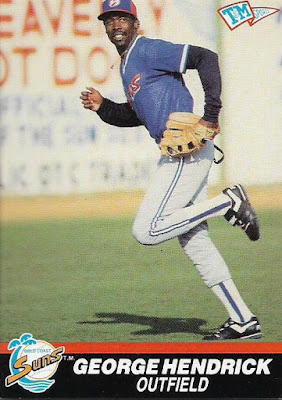 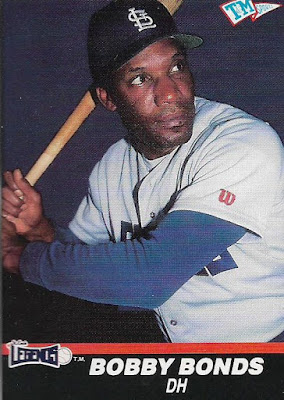 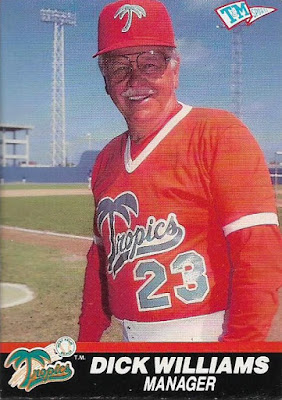 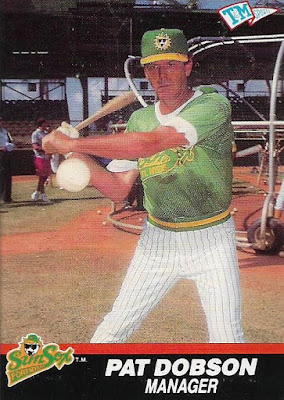 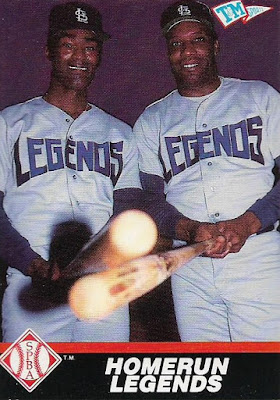 But at least I now have the cards of that brief tribute to my golden age of baseball.

The league has lived on in various publications and internet tributes. You can't field a league with Gates Brown, Willie Mays Aikens, Ross Grimsley, Ron Washington ... 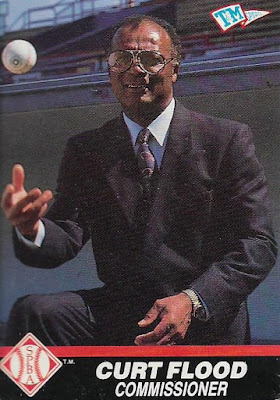 ... and Curt Flood as your commissioner and not capture the imagination of those who follow the game.

The box that I received contained all but seven of the cards in the set. Perhaps not coincidentally, five of those seven cards are of players referred to as the league's marquee names:

However, although all of those missing players are key parts of my baseball-following childhood, I don't consider their cards more important than anyone else's. That is the great part about collecting cards as a kid in the 1970s. 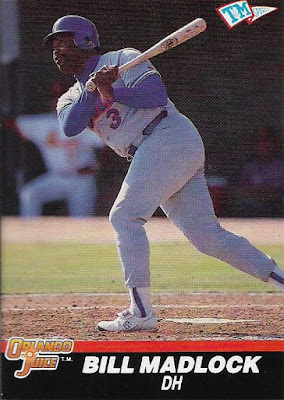 Bill Madlock is equal to ... 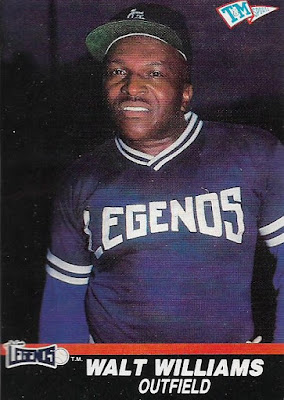 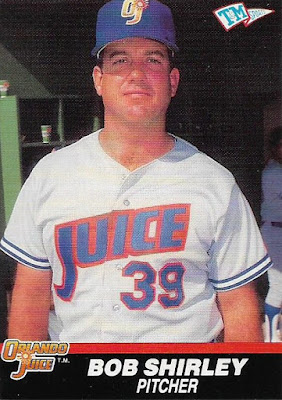 ... in the grand scheme of things.

And that grand scheme is they all made baseball the most important, glorious, fascinating event when I was a kid.

They deserve a place of honor.

They deserve this set.

They deserved to play longer in that league than a year-and-a-half.

deal said…
I have the Topps Set and would like to pick up some cards from these other sets. Agreed, Great cards for collectors of a certain age. "Extra Innings" is the book on the league probably a fun read https://www.amazon.com/Extra-Innings-Season-Senior-League/dp/006016459X I read somewhere in addition the financial issues they also had trouble keeping players on the field due to injuries.
February 21, 2018 at 8:00 PM

EP said…
I forgot all about that league. Those cards give new meaning to the term sunset cards.
February 21, 2018 at 8:43 PM

Adam said…
The podcast "Good Seats Still Available" did an episode on this league not too long ago. I recommend giving it a listen if you have time, it's pretty interesting.
February 21, 2018 at 8:51 PM

Mad Guru said…
As a 46 year old, I'm with you. I have some of the other sets and have always enjoyed them. In addition to the book Extra Innings mentioned above, Jay Walker put out an encyclopedia if you have a hankering for the stats of the league.
February 21, 2018 at 9:00 PM

DMA said…
It's always amazing to me that as many baseball cards as I bought circa 1990, there were still so many sets that I didn't know about. I have a number of Pacific cards of the senior league, but didn't know that there were other companies making cards of them. Thanks for sharing these!
February 21, 2018 at 9:06 PM

Chris said…
I heard of the Senior league but didnt get to follow it. It's a great concept in theory, but I could understand why it would struggle at the gate (I'd go to games though)

"I'll give you 10 Paul Goldschmidt cards for one Juan Beniquez card that I have never seen before." Daniel Wilson would probably take you up on that offer.

Those Tropics cards are priceless, especially Mickey Rivers and the Mad Hungarian. Please tell me they played in Flint.
February 21, 2018 at 9:26 PM

steelehere said…
I imagine living in Honolulu with the Hawaiian Tropics would be more desirable for the old timers.
February 21, 2018 at 9:51 PM

Kin said…
That was awesome, thank you for sharing. I feel with today’s cable, streaming methods, etc, a league like this could be a success.
February 21, 2018 at 10:04 PM

BaseSetCalling said…
One day last summer I went out for some dinner and some baseball on the TV. And the sports bar was showing the "Kansas Stars" vs. "The Merchants" @ The National Baseball Congress. It definitely caught my eye to see Brandon Inge playing some baseball again.

As far as I can tell, there haven't been any cards associated with this project yet.

GCA said…
I've got some extras from one of the Pacific sets. Still need some 2nd copies of the T&M's since the bulk of my player collection guys are in it too.
February 22, 2018 at 9:50 AM

acrackedbat said…
I picked up this set sealed for $2. It takes me too long to share my cards. You beat me to it - and did a better job that I would have anyway! I can get another couple of these so let me hook you up with the 7 cards you are missing. Consider your set complete!
February 22, 2018 at 3:00 PM

Peter K Steinberg said…
This is an incredible post of some truly fantastic baseball cards. Holy crap. Thank you for posting this.
February 22, 2018 at 7:34 PM

Fuji said…
So many great names. Glad to see Lowell didn't give up his shades and Curt was running the show. And that Campaneris is hands down the greatest card in that set. Off to add this set to my eBay watch list.
February 23, 2018 at 9:33 AM