February 03, 2018
A few weeks ago I told the sad tale of my sister-in-law buying me a repack box for Christmas. She actually unknowingly purchased a box that already had been purchased, pillaged, repackaged, returned -- no doubt for full credit -- and placed back on the shelf.

When it arrived in my hands, it did not include the promised autograph anymore. All that was left was some Panini cards from five years ago.

My theory is most of those Panini cards were in the repack box in the first place. Because that's what Fairfield -- the repack company -- likes to do. Most people understandably don't want anything to do with Panini baseball so the scammer returned those cards to the box after removing whatever hit was involved.

I didn't think much about the dirty deed after writing that post, but that's the cool thing about having regular readers. Somebody else did think of it, and sent me a card to make up for getting scammed. 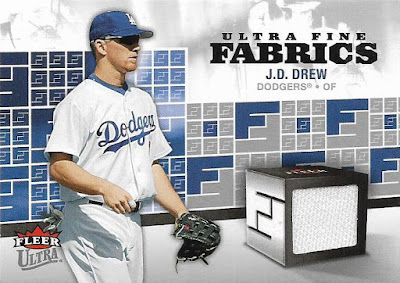 This card arrived from Nick, and it is the most perfect repack replacement card.

No, it is not an autograph, but I don't care about that. Can't you see pulling this out of a Fairfield repack box?

It's a bit star-studded for my repack pulls. I'm usually expecting someone like Ozzie Canseco or Matt Mieske when Fairfield promises me something. But it's definitely in the ballpark. In the dugout even. And Nick, did in fact pull it out of a Fairfield repack.

It's a 12-year-old jersey card that Fairfield would've picked up on the cheap and it's a player that nobody really enjoys that much. Have you ever heard of a J.D. Drew player collector? I haven't. Fans of some teams absolutely despise him, while fans of other teams for which he played weren't all that crazy about him.

I'm included in that latter group. When the Dodgers acquired him, I think my reaction was, "Ah, geez," and then I promptly went about pretending he didn't play for my team.

But, yes, I do want this relic card. He's wearing a Dodgers jersey isn't he? This is my fifth J.D. Drew relic card, but my first Fleer one. (I've got two from Donruss and two from Upper Deck). It's the perfect Drew relic card. There he is, looking very much like a ballplayer, doing what he does very well, but not seeming to enjoy it very much.

From this point on, I will tell people that THIS is the card I pulled out of that repack box. If my sister-in-law ever inquires (and she won't), I will show her this card.

You think you won. You didn't.

And I know the guilt is still gnawing at you.

Jeremya1um said…
Good for you, and what a great example of the selflessness and generosity of the card blogging community with Nick.
I pulled a Ramon Hernandez jersey card from that exact set in a repack around 8 years ago. Nick hit this one on the head.
February 3, 2018 at 7:59 PM

Rob said…
As a two-time graduate of Western Michigan University, Matt Mieske would be an AWESOME find! John Vander Wal too.
February 3, 2018 at 11:01 PM

jacobmrley said…
I once got a super swatch of Miguel Tejada numbered to /75 from a Fairfield repack. That's the equivalent of a 1/1 superfractor I believe.
February 4, 2018 at 8:16 PM

Chris said…
That its definitely a repack quality pull (I got a Shawn Green bat relic out of one) nice of Nick to send it your way. Count me as someone who never liked Drew; when he opted out of his Dodgers deal I laughed out loud. Ha! I said. What team is going to be dumb enough to give that guy more money?

The answer, of course was my team - the Boston Red Sox :/

kcjays said…
I don't recall him being all that well liked when he played for the Cardinals either. My brother ran into him at a bar in Nashville (part owner?) last year. He sent me a selfie of the two of them and wanted me to guess who he was with. I couldn't. After he told me, I commented that when he was a ball player he didn't have a reputation of being all that friendly. My brother told me that he still isn't. Would allow a selfie but no autograph.
Nice card though. Congrats
February 4, 2018 at 11:01 PM

Jongudmund said…
I bought a repack block of cards in a supermarket once and didn't realise it had a relic in the middle of it. Turned out to be a Padres swatch card of Sean Burroughs. My team! I was pleased.

I've heard other people talk about people pulling a similar stunt with high end Lego sets, replacing the bags with junk. Not heard about it with card repacks. I'll be a bit careful next time I'm in the States.
February 7, 2018 at 4:48 PM