February 25, 2018
(It's the end of February, meaning I'm as exhausted as all get-out, the perfect state of mind heading into the busiest month of the year. Yay! Time for Cardboard appreciation. This is the 268th in a series): 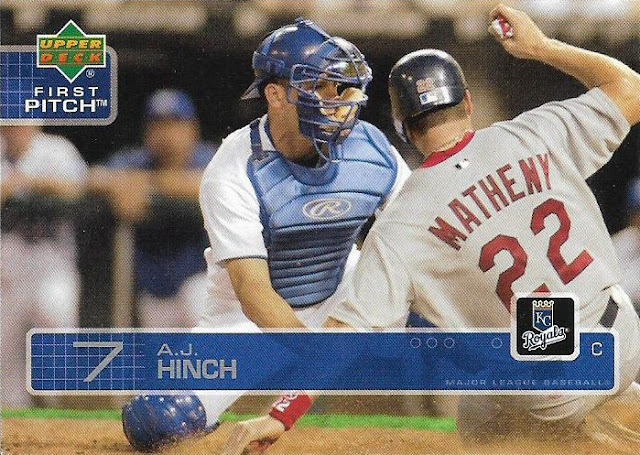 Take a look at this card and what do you see?

At face value, it is a "play-at-the-plate" card. In simpler times, I'd try to determine when this play happened and the outcome of the play.

But let's go deeper. What else do you see on this card?

I'm sure two future managers have appeared on the same card before. But I don't know how many of them were involved in a play at the plate.

To make this card more personal, though, it happens to be a card of two future managers who are younger than me.

I don't like A.J. Hinch very much. It's purely for selfish reasons. He is the manager of the team that beat my Dodgers in 7 games in last year's World Series. I will accuse any manager who beat my team in the World Series of nefarious activities, and I have no doubt that Hinch is guilty.

But also I don't like him, selfishly, because he was just 34 when he was named major league manager for the first time, by the Diamondbacks, back in 2009. Thirty-four! I believe at the time, it was the first MLB manager who was younger than me. But not just younger than me, BLATANTLY younger than me. Being an MLB manager at 34? That's kind of obnoxious, don't you think? Like one of those 14-year-olds admitted to Stanford (yes, Hinch is a Stanford grad).

Hinch was something of a novelty when he was hired. There were major league players older than Hinch at the time, and Jamie Moyer was still pitching, so there were still players younger than me.

But then Moyer retired and teams started naming more managers younger than me. Mike Matheny -- who clearly has attended "Never Let Them See You Smile" class for Cardinals managers -- was appointed St. Louis manager in 2012 at age 42.

In 2015 and 2016, Craig Counsell, Dave Roberts, Torey Luvello, Andy Green and Scott Servais were appointed Managers Who Are Younger Than Me. Oh, and I forgot Kevin Cash, who I'm pretty sure is younger than Justin Bieber.

This offseason, the Red Sox, Yankees, Mets and Phillies all named managers who were playing in sandboxes when I was in high school. So, the trend that A.J. Hinch started is clearly not going away. In fact, someday I may be clinging to Hinch or Dave Roberts like I did to Jamie Moyer as a sign that, "SEE? There's someone more ancient than me!"

Just for your handy-dandy comparison amusement, here are all the current managers and their ages:

I admit there is a certain amount of skepticism when I watch a manager younger than I am make a decision in a baseball game. Sure, he has all the major league experiences, but when I realize that I was watching baseball games before that dude even knew what baseball was, well, sometimes you think you know better from your couch.

Of course, it doesn't help when the little rascal beats your team in the World Series.

P.S.: The card photo appears to be from a June 7, 2002 game between the Cardinals and Royals in Kansas City. Mike Matheny scores from second on a two-run single by Fernando Vina.

Stubby said…
Well, when you put it like that.... All I can say for myself is thank God for Joe Maddon and Ned Yost. (I knew there was a reason I didn't hate Terry Collins like the other Mets fans did.)
February 25, 2018 at 7:47 PM

Nick Vossbrink said…
I got Hinch's autograph on his 1993 Topps Traded card when he was 19-year-old sophomore at Stanford. I was 15 and still felt like a kid compared to him and in many ways that's still kind of how I picture our age difference. He *can't* be basically my age right? He was so big when I was still so little.
February 25, 2018 at 8:12 PM

GCA said…
I used to like it when '70s players that I knew became managers. Now, a lot of them are from the 90's cards that I don't know nearly as well. Another by-product of being older than most of those involved, I guess. At least people tell me I still look like I'm from a generation later the one that I really am from.
February 25, 2018 at 8:50 PM

Andy L said…
It's great that Gabe Kapler found work after Welcome Back Kotter.I jest... I still have hopes at age 44 that the Brewers will call me up to play 3rd base. Some dreams may never die.
February 25, 2018 at 8:59 PM

Henry Blanchette said…
I absolutely agree with you. It seems odd that there are now around 10 MLB managers in their 40's when it's almost always been guys who are much older and have way more experience.
February 25, 2018 at 10:00 PM

Mike the History Teacher said…
I remember reading a column in 1987 where the sportswriter lamented the retirement of Phil Niekro, the last MLB player who was older than the columnist.

I was still a few months shy of 20 myself, so while I probably found the column interesting, I couldn't possibly have been able to relate to the existential crisis the writer suddenly was experiencing. After all, every Major Leaguer was older than me.

Many years would pass before I would understand. I didn't have that sudden shock the writer had 25 years before; for me it was drawn out for many months.

It was a jolt, but not a surprise, when Omar Vizquel retired. But I knew I could find some solace in Jamie Moyer. Sure, he hadn't thrown a big-league pitch in the last two-thirds of the 2012 season, but there just had to be a team that would give one more chance to an experienced, crafty lefty, even if only to mentor a young staff while making an appearance or two a week. Gradually, it became obvious that I would never again be younger than a Major League Baseball player.

This off-season I have held out a little hope (okay, more than a little) that somehow 53-year-old Rafael Palmiero is successful in his comeback attempt. How nice would that would be, even if I -- I mean he -- could have just one more game.

Nick said…
I'm starting to reach the age where most rookies who come up are younger than me by several years. I've got a few years before I start becoming older than the managers (hopefully), but it still boggles my mind that there are guys currently in the bigs who were born in 1997(!).
February 26, 2018 at 12:12 AM

Billy Kingsley said…
It was a weird feeling for me as well, to realize that the people I was watching on a daily basis were no longer elders to look up to, but then peers and now "kids". For me it really hit home in 2015 when the first player joined the NBA who was born after I discovered the sport's existence at age 11.
February 26, 2018 at 5:39 AM

Old Cards said…
Great discussion on managers, but to answer your first question, on this card I see the name A.J. Hinch, but in the foreground I see Matheny. Then I see a player in catcher equipment. Could be any catcher on the KC roster. On a card labeled A.J. Hinch, I would like to actually see a decent representation of the player featured on the card.
February 26, 2018 at 8:06 AM

Hoarding Cardboard said…
Much like the thoughts echoed above, I share similar sentiments. Although I'm still what many would call "young" (23), it's scary to look at the back of a baseball card (usually a draft pick or Bowman) and see a DOB x/x/1994 or x/x/1995. Even weirder is seeing guys that I played with or against get their own cards for the MiLB or independent league team.
February 26, 2018 at 10:07 AM

Jongudmund said…
It's when I see soccer players and I remember their dads as players on the weekend highlights show that makes me feel old. Must be the same in baseball, although there's more chance of a father and son playing in the same line up than in any other sport.
February 26, 2018 at 2:53 PM

Fuji said…
Seven of them are younger than me. Roberts has me by a few months.

btw... after staring at the card for a few seconds, I thought this post would eventually reveal what Matheny was holding in his right hand.
February 27, 2018 at 11:19 PM