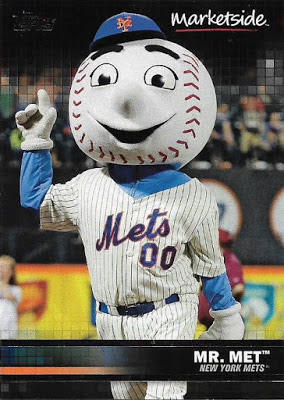 Let's face it, Topps has come up with some interesting card ideas in the past year.

The revival of oddball issues, the daily reveal of ToppsNow cards, and now some sort of rip card that doubles as a prize-winning game, have been well-received, in general.

New ideas are never perfect and there are some aspects of this latest newness that don't appeal to me. I will never grasp digital-only cards, for example, and the chances of me pulling some contest rip card are nil because I don't like flagship this year. But Topps needs to do stuff like this, if only to quiet the endless drumbeat demands of "INNOVATION!" that you hear from '90s kids all the time.

Personally, I'd be happy with a thorough, well-crafted, 726-card base set on sturdy cardboard. Period. But the hobby, like the world, is all about "gotta do MORE NOW" these days, so I know that objective left the radar a long time ago.

But I'm here to tell you that things could be worse. Much worse.

Here are 10 innovative card ideas that I came up with on my walk today. None of them are as desirable as purchasing a card with your breadsticks. In fact, all of them are downright awful.

Let's take a look at some terrible innovations:

1. A reprint insert set that is nothing but cards from 1991 Donruss. In fact, they are the actual 1991 Donruss cards, but with the word "reprint" scrawled on the back by some high school student.

2. A card set scented with the smells of the ballpark. Featuring 20 different smells. Sounds great, right? Well, no card company has been able to execute a new idea perfectly, so amid the "hot dog" and "green grass" smells would be cards that smell like "locker room" and "Don Zimmer."

3. Paint swatch cards featuring the chosen colors and patterns of the kitchens in players' homes.

4. Variation photos of every single card in a 700-card set. We're headed in this direction now if we haven't already done it.

5. An insert set featuring players digitally painted so they look like mimes.

6. Billboard cards. Each card is as large as a billboard and you can put it in your yard or on the back of your home. You have to figure out how to transport it first though.

7. Aerodynamic cards -- cards that can actually fly 300 feet in the air. Unfortunately, you have to fold the card for it to fly. It also doubles as the world's flimsiest drone. So each pack comes with legal issues.

8. Oddball cards issued with children's medicine. Collectors are required to be accompanied by a sick child in order to buy the medicine. The child must supply a mucus sample for the store clerk.

9. This is for the future. Cities, realizing they can get in on the licensing money previously reserved for clubs, also demand licensing agreements. Card companies without a license must issue sets without team names or city names. The cards are simply players in generic laundry with no words on the front. The only way you can find out what team or city they play for is by using the code implanted on your forehead when you bought the pack so you can enter it in an underground online forum site.

10. For the prospectors: a pack of cash. Most packs contain 10 $1 bills. But there are 5s, 10s, 20s and 50s inserted randomly. Each pack is $30, because collectors are used to paying more than cards are worth. Big box stores are forced to hire security guards for the card aisles.

See? Terrible. Things could be a lot worse.

Card companies are trying. They really are. Maybe not at the rate that we want them to, but at least there's an idea from 2016 where I can say "I like that."

Meanwhile, someone somewhere is going to like one of the terrible ideas I just floated.

So just remember where you read it first.

And save me a pack.

what if
Labels: what if

Zippy Zappy said…
Haha, you're tenth idea is proof that prospecting is pretty much gambling.

Sascards67 said…
A set by Panini featuring a description paragraph of the picture that they would like to put on the front but they ran out of airbrush paint and can't block the logos. The backs would look like the backs of every other Panini/Donruss product so you couldn't tell which set it actually came from or even what sport. The variations would be random misspellings but you would have to figure out if it is a variation or they just didn't proofread the card text.
June 22, 2016 at 7:27 PM

John Bateman said…
I would go for the 700 card set with every single card having a variation if and only if there were no other inserts. A 12 pack of cards would always give you 12 cards for the set and nothing else.
June 22, 2016 at 10:55 PM

Stubby said…
#10: If we're to extend the state of the "hobby" today forward, then I can pretty much guarantee you that, a few years after your packs of cash are issued, they'll be available on the secondary market at $2 a pack and, even though the worst you could get is $10 for your $2, nobody will want them (however, there might be a boost in repack sales).
June 23, 2016 at 3:24 AM

Jeremya1um said…
Soccer :(((((( Boring. What about memorabilia cards with players blood on part of the jersey? These ideas were great, but it would be cool to see a follow-up post with some real ideas for Topps. Maybe they would actually read it and incorporate them into sets.
June 23, 2016 at 4:50 AM

GCA said…
Blood? How about this? http://thecollectivemind.blogspot.com/2011/04/2008-absolute-idiot-plaxico-burress.html

Here's an innovation for you from 2011 that didn't quite catch on - not jersey cards, Joisey cards! http://thecollectivemind.blogspot.com/2011/05/newest-thing-in-jersey-cards-joisey.html

But seriously, I think the conversation goes like this:
Boss: OK, we need some new products for this year. What sold well last year?
20 year old intern #1: Rookies!
19 year old intern #2: Shiny!
20 year old intern #3: Retro! and reprints of old Topps cards...
Boss: OK let's do all that again!
Interns: The same way?
Boss: Uh, whatever you think. You guys collect, right? Throw in some innovation somewhere.
Interns:
Boss: Don't forget to emphasize the large market teams! Dismissed!
Intern #3: We could make the backgrounds smoky!
Interns: Yeah, cool!
June 23, 2016 at 8:23 AM

Jason Presley said…
How about instead of photoshopping or airbrushing uniforms when players change teams, photoshop the player's head onto another photo with the correct uniform? Airbrush the players!

Fuji said…
Lol... awesome post! If a card company ever produced a Don Zimmer "scent" card... I'd probably put that at the top of my wantlist. But in all seriousness... as a guy who loves his 90's innovation and inserts... I'd love to see a 726 card set on old school card stock with absolutely no parallels, no insert sets, no short prints, no variations, and no "on purpose" error cards. Just good old fashioned base cards.
June 24, 2016 at 2:04 AM

CaptKirk42 said…
Hmm the "scent" cards they can just repackage some old scratch and sniff stickers from the 1980s/90s. OK so what if the NY team from the NL is the Strawberries now, and the San Diego Bananas?
June 24, 2016 at 10:43 AM