The new king: the middle years 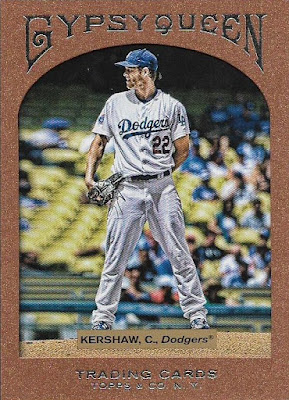 You may have heard that Clayton Kershaw was named the National League's Pitcher of the Month for May. I won't claim that Kershaw doesn't get his recognition. But with all the noise about Arrieta and Syndergaard and Bumgarner, it's nice to know that Clayton's still impressing the hell out of everyone.

You've also probably read about Kershaw's record-setting walks-to-strikeouts ratio, which so far is the best in a single season all-time (granted, June just started). He's struck out 105 batters and walked just five. Madison Bumgarner gave up five walks in his first start of the year.

But that's enough about something you can read on a bazillion other baseball sites (get our newsletter NOW!). There's only one place you can read about some Dodgers fan rambling about his Clayton Kershaw cards. ... well, one of only, like, six places anyway.

I now possess more Kershaw cards than cards of any other player in my collection (and there are hundreds of players in the collection) at 465 strong. And we've reached "The Middle Years" in my review of some of my more notable and favorite Kershaws, 10 cards (or so) at a time.

Kershaw is only 28. So "Middle Years" refers to the middle of his career so far. I fully expect that Kershaw is actually just entering his middle years in real life.

More pretty cards of the best pitcher in the land: 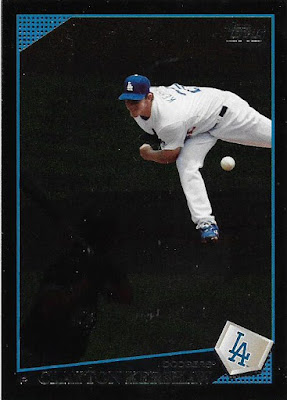 I must have at least one card that amuses me. This is the first year that Topps went with the "blackout" parallel as a Walmart exclusive. It didn't work so well with the Kershaw photo. Lots of room for a cool silver signature. But he appears to be pooping a baseball. 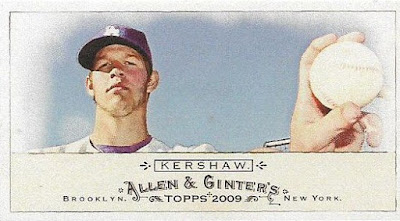 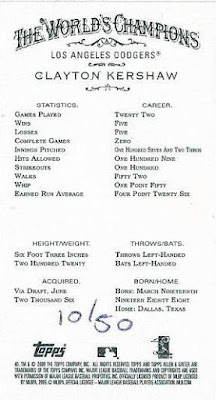 Probably the best card Kershaw has ever had to date. I said this card was the best Dodgers card of the year back in 2009, and I'm not taking it back. The image works even better on the mini version. And just to be pseudo-impressive and exclusive, I chose the no-number back version. It might be my "rarest" Kershaw card. 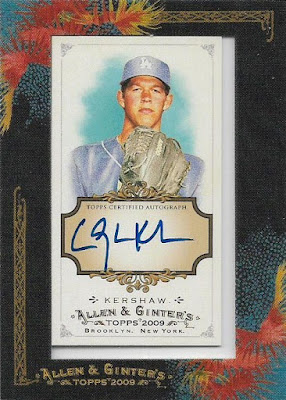 This is my favorite autograph card of the few Kershaw autographs that I own. The frame color is one of the best that A&G made and it needs to bring this style back. The pose is classic. A&G doesn't give a lot of room for the signature but Kershaw made it work. 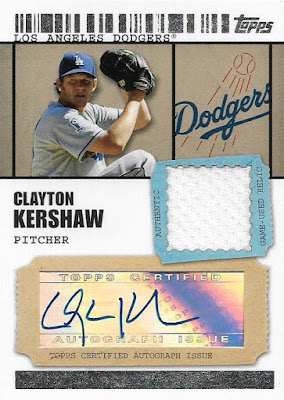 Ticket To Stardom may be the worst one-off set that Topps has made in the last 20 years. This card isn't even all that great in the realm of relic/auto cards. But it is my only Kershaw relic/auto card, and that makes it phenomenal. 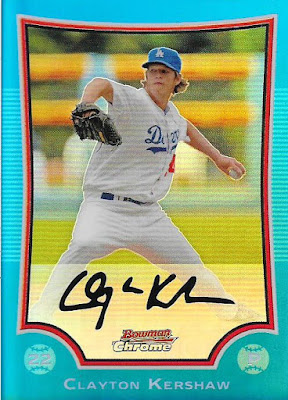 I'm realizing how many Bowman cards have been in this retrospective so far. That's surprising. But I do love electric blue anything and this is about as Electric Blue that you can get on a baseball card. One of my all-time Kershaw favorites. 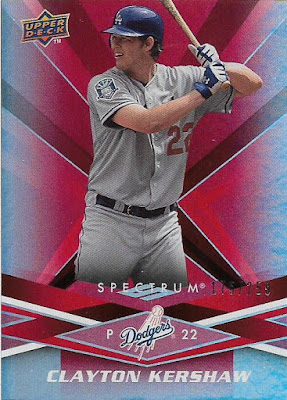 Spectrum also wasn't appealing with its sickly, cough-syrup crosshairs theme. But the red parallels are nicer and it's one of the few cards that shows Kershaw at the plate. As you know, he can take care of himself at the dish. 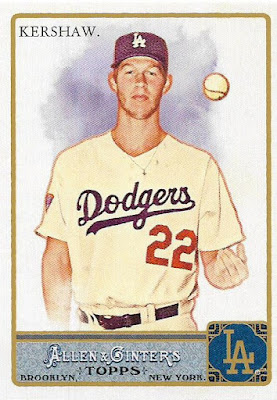 Did you notice how I skipped over 2010 completely? Actually 2010 wasn't all that bad for Kershaw cards. His flagship wingspan card is decent. I think it's all that curling Chrome from that year that turned me off. Anyway, Kershaw performs another well-loved and cliched pose in 2011 A&G. But the filter makes Kershaw's hand look like it was drawn in. 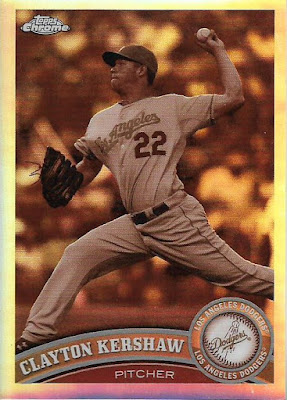 Here is another exception I make for Kershaw cards. I generally don't chase sepias because they're usually too much for too little payoff. But this is a nice image and I need to see what Kershaw would look like if he had a picture taken in 1880 and, um ... they could take action photos then. 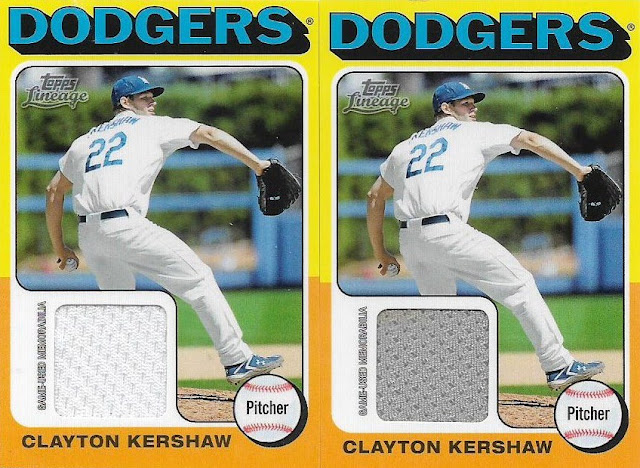 The best thing to happen to cards in 2011 was the Lineage '75-style mini set. When I first saw the relics, taking up all that beautiful 1975 Topps acreage, I didn't know what to think. It seemed odd, like someone cut a hole in perfection. But I've adjusted enough to appreciate the relics enough that I have one in home and away colors. 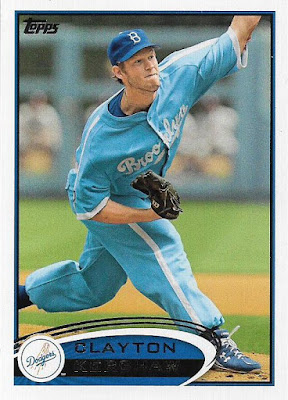 The Dodgers don't wear alternative-style uniforms that often -- thank goodness -- so the few times that do stand out. One of those times was actually several games in 2011 when they wore powder blue uniforms in a tribute to the 1940s Brooklyn Dodgers who periodically wore powder blue satin uniforms. Kershaw isn't wearing satin -- thank goodness again -- but it's kind of cool, even if he looks pretty dorky in it.


So that takes us up to 2012. The final segment will cover "Today," which is actually four years, 2012-16. You won't see a lot of mojo cards in the next group, simply because those cards have gotten outrageous in terms of price and there are many more Kershaw collectors than there was five years ago.

But that's OK. It's nice to have at least someone who can pitch on the Dodgers.

Nachos Grande said…
Fairly certain I may have helped with a couple of those. My almost complete shut down of buying new cards hasn't given me much to send your way these days. I'm still hoping for a good year of Ginter, maybe that'll get me interested once again.
June 3, 2016 at 10:23 PM

Fuji said…
I'm in the process of finding a cool relic card for my Kershaw trifecta. That Lineage card might just do the trick... assuming I can find an affordable copy.
June 5, 2016 at 3:24 PM