'56 of the month: Roy McMillan 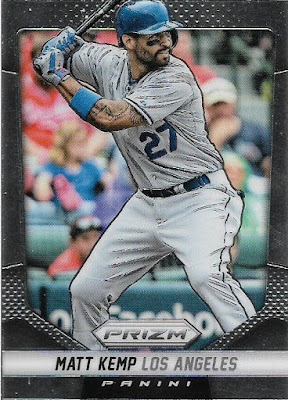 We begin this month's '56 of the Month post with a Panini card.

Yes, a Panini card. I can't get much farther from a 1956 Topps card than shiny, metallic Panini Prizm.

But there's always a reason on NOC. This card, and the '56 Topps card I'm about to show have something in common.

As you know, the Dodgers wear red numbers on their uniform fronts. It is one of the most famous uniform accents in the history of professional sports, as there is little red (outside of the shooting baseball in the logo) in the entire Dodgers' makeup.

But Panini's cards illustrate the front number in blue, which is quite jarring for Dodgers collectors, and I would think, faithful baseball followers. The red number is as part of the Dodgers uniform as pinstripes on a Yankees uniform.

Because it is such a fixture in Dodgers' uniform history, my guess is it is off-limits for depiction by Panini, which does not own a Major League Baseball license. Logos are off-limits and the red uniform number, I guess, is treated as a logo, too. I don't know how else you would explain the blue.

So, it's well-established: red number on the uniform front, iconic and eye-catching, blue number on the front drab, jarring and never happened. 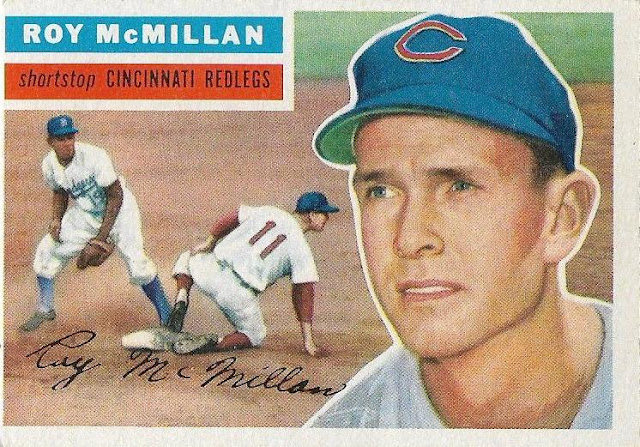 I'm sure you've spotted it right away.

That's a blue No. 19 on the front of the Dodger infielder.

Let's get the ID out of the way first. The Dodger infielder is Jim Gilliam. No. 19 is famous in Dodger lore as Gilliam's number is the only retired number of a player not inducted into the Hall of Fame in Dodgers history. Gilliam died the day before the Dodgers clinched the pennant in 1978, and his uniform number was retired just before Game 1 of the World Series.

The Dodgers began wearing red numbers on the front of their uniforms at the start of the 1952 season. They were supposed to debut them for the 1951 World Series, but Bobby Thomson and some dirty sign-stealers interrupted that. The front uniforms were red -- as opposed to the blue uniforms on the back -- because color TV was starting to filter into the mainstream and Dodger management figured red stood out more than blue. The entire account was revealed a couple of years ago.

So, by 1955 -- supposedly when this play happened (most of the action on 56 Topps are illustrated black-and-white photos from the 1955 season) -- the red numbers on the front were firmly established. There weren't any blue numbers.

And there weren't any blue numbers before the Dodgers started red numbers. Take a look.

So, um, why the blue number on this card?

And how about these 1956 Topps cards? 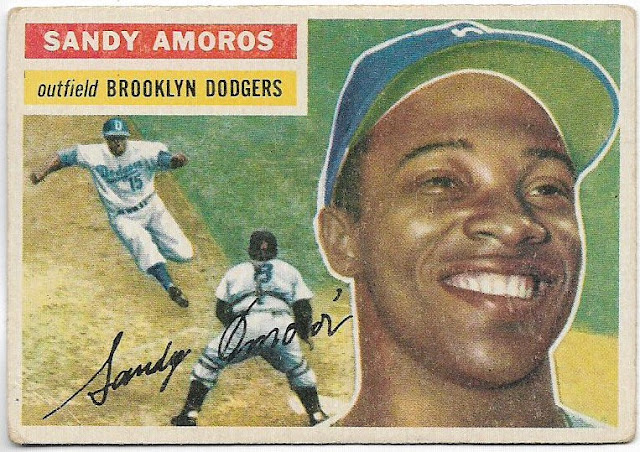 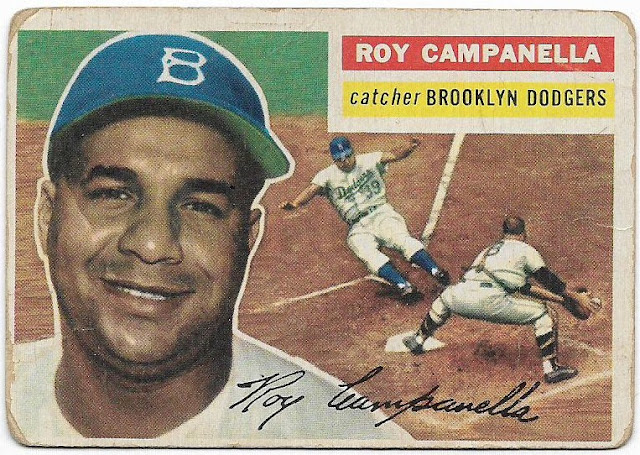 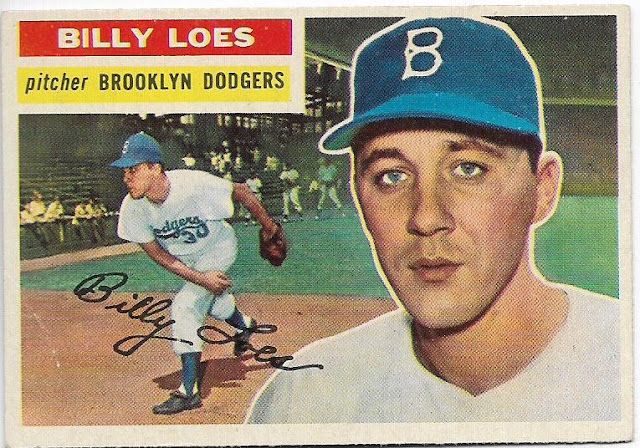 All of them are shown wearing blue front numbers.

I'm tempted to believe that if the numbers were depicted in blue that often then maybe there were actually blue numbers at some point. Or maybe the artists just weren't up on the proper coloring and assumed that a team that wears blue would have blue numbers across the board.

Or maybe -- wouldn't this be vindication for Panini -- they actually weren't allowed legally to show red numbers.

(I'm going to go with the "artists were clueless" possibility until told otherwise). 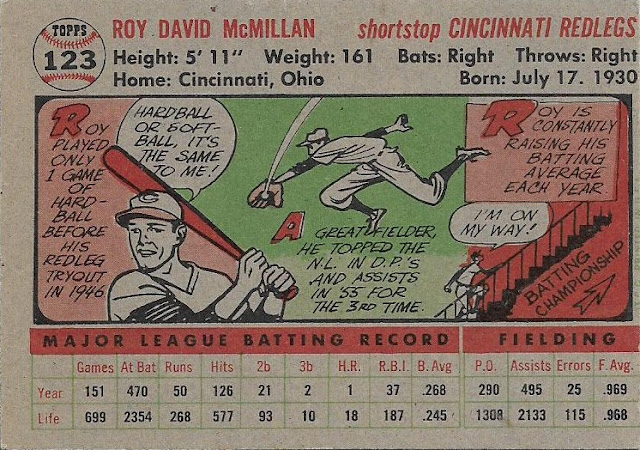 I probably should mention something about Roy McMillan since it actually IS his card.

McMillan was the glue to the Reds' infield in the 1950s, a multi-Gold Glover who once held the record for most double plays turned in a season. After his career he served as interim manager twice, once for the Brewers in the early '70s and then once for the Mets after Yogi Berra was fired in 1975.

The first cartoon strip is interesting to me. A softball player, huh? I actually grew up playing baseball with a tennis ball in the backyard before graduating to hard ball. It was pretty jarring making the transition. I wonder if that was that way for McMillan, although the cartoon states "it's all the same to me!"

As for the last cartoon, McMillan would never be mistaken for someone to win a batting title. His average started downward in the late '50s and he ended up with a career .243 average.

Also note the reference to "Redlegs" on these '56 cards. That was leftover from the red scare of the '50s. The switch to "Redlegs" began in the 1954 Topps set and did not return to "Reds" until the 1960 set.

(Lot of talk about red and blue in this post. The 4th of July is around the corner).

Commishbob said…
I'd go with 'clueless'. They probably did exactly as you suggest...assume the numbers were blue since even casual fans would know that was the Dodgers color. This wouldn't surprise me either given some of the ridiculous logo representations on 50s Topps (see SF on Giants caps and goofy Oriole on theirs). Or....they were just too lazy to clean the brush and dip it into red paint.
June 25, 2016 at 9:12 PM

Tony Burbs said…
Personally, I always assume cluelessness, unless proven otherwise. I may be too cynical for my own good.
June 25, 2016 at 11:25 PM

Anonymous said…
I, too, will go with "clueless"... For the action shots, they were probably working off of black & white photos as reference material, and they didn't realize that the numbers were a different color.

...or... shockingly enough... Maybe they figured that these were being made for a bunch of kids who wouldn't know the difference, so why (as Commish Bob suggests) clean my brush?
June 25, 2016 at 11:54 PM

AdamE said…
My guess is that particular 56 colorist was just like you. At that point the red numbers had only been around a couple years. Just like the red numbers are ingrained in your mind the older blue numbers were probably ingrained into his.
June 26, 2016 at 4:35 AM

Stack22 said…
'56 strikes me as honest mistakes. The change to red was new, and I'm under the impression (perhaps wrongly) that Topps had their artist paint b&w photo's for the early sets.

I suspect the Panini artist was just a little too happy with his air brush and perhaps an idiot who thought he was "fixing" the red. I have a hard time imagining red numbers being a trademark issue.
June 27, 2016 at 1:54 PM

Dave said…
A swear a lot of the oversized Pirate cards depict their caps as navy blue even though they went all black-and-gold in 1948. My assumption was the artist was just lazy.
June 27, 2016 at 8:50 PM

Stubby said…
Panini does this with pretty much every team and it has to be license related. You think the blue number is jarring, check the solid blue stripe on the cards of the Expos. Horrific. And there can't possibly be any (other) legitimate reason for that unless MLB told Panini that those uniforms had better not even remotely resemble the real thing.

But on the '56 Topps, I'm going to guess that it is exactly the reason the Dodgers have red numbers in reverse. That is to say that, as the Dodgers went to the red because it "stood out", the artistic layout decision of the Topps folks in '56 was that it stood out too much, thus drawing attention away from the primary photo. The way people see things is pretty well standard. As a newspaper guy, you know that the prime real estate on the inside of the paper is the upper right. Ditto with restaurant menus. That's where your eyes automatically go first, unless there's something really distracting going on elsewhere. In the case of the '56s, your eyes will naturally go to the larger picture first. So I'm guessing Topps wanted the action photo to be complimentary and not the main focus. Thus all of the action uniforms are fairly monochromatic. You don't see any yellow outline or piping on the Pirates unis in the '56 set or any orange on the Giants unis, etc., etc. You put a red number on an otherwise blue uni, that's going to draw you off of the primary photo straight away. Happily for them, Charles O Finley and his bright colored uniforms (and orange baseballs) was still a few years off.
June 28, 2016 at 4:45 AM