Finally, you have my undivided attention 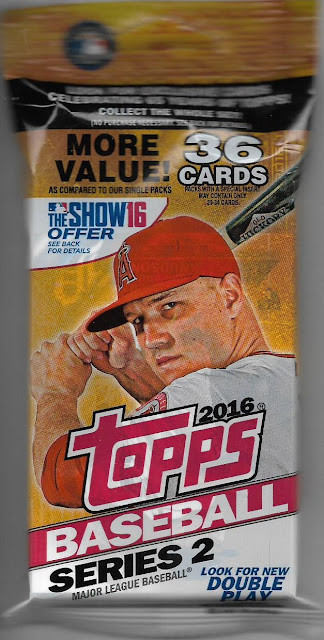 Last month, I made 21 entries to this blog. That was an all-time low for me. Never in the seven-plus year history of Night Owl Cards had I been less prolific.

Today's post, on the final day of June, is No. 20 on NOC for the month. Welcome to a new all-time low.

I saw this coming a few months ago, and it doesn't have anything to do with a lack of blogging interest or cardboard malaise or anything like that. It's mostly because I have never been so busy during the life of this blog than the last two months. Multiple trips out of state for various reasons, graduations and other milestone celebrations, and year-long work planning projects coming to fruition, all conspired to keep me away from my beloved blog.

I knew they were coming. I knew I couldn't do anything about them. And I also knew that by the end of June, they would all be over.

It is the end of June. You now have my undivided attention.

Let's celebrate with a fat pack of Series 2!

Yeah, I don't like 2016 Topps, Series 1 or Series 2, any more than you do. In fact, it's a good bet I like it less than you. But new is NEW in the cardboard addiction world and I must sample. This will be my one and only Series 2 purchase. I'm actually annoyed that I couldn't find a loose pack, because I didn't even want to buy this much.

So let's see what kind of fog-covered photos are in the offing. It doesn't really matter anyway. You're just happy to have me back, aren't you? 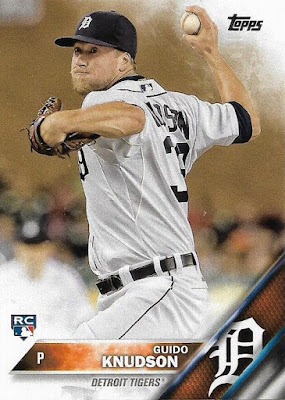 No idea. There will never be another flagship set issued for the rest of my life in which I know every player. 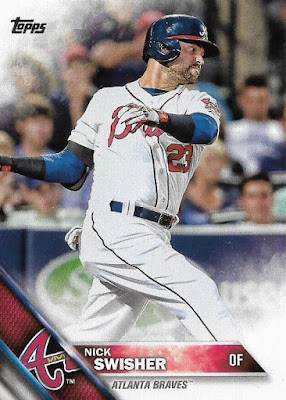 I don't know when Topps puts its Series selections to bed. Swisher was released by the Braves at the end of March. Really no need for a card of him. 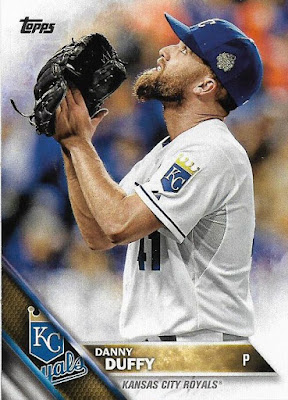 Duffy offers up a prayer as the stadium fills with smoke. 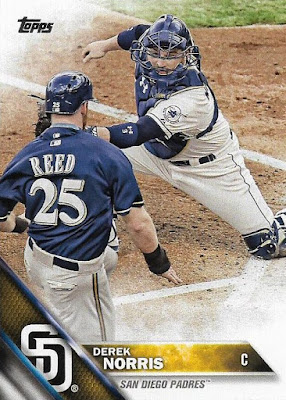 Nice shot of a Padres-Brewers game, a matchup you will never see on ESPN Sunday Night Baseball. 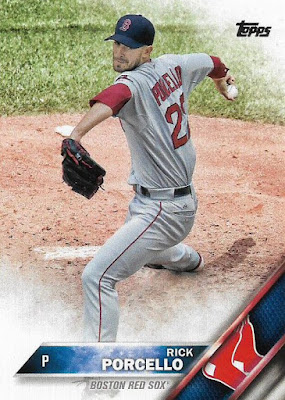 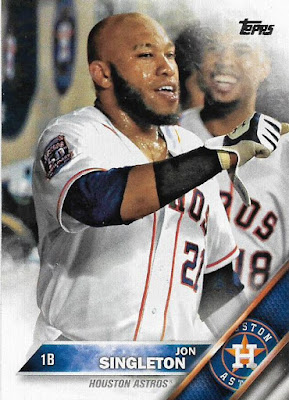 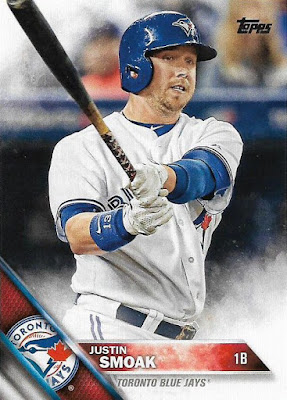 Smoak swinging in a field filled with smoke! 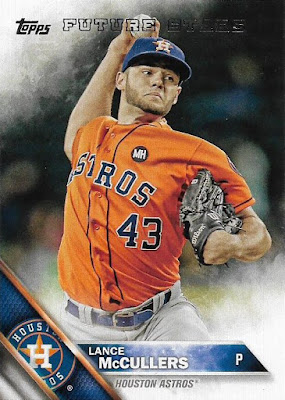 We've reached the future stars portion of the pack. Way too many of these things. 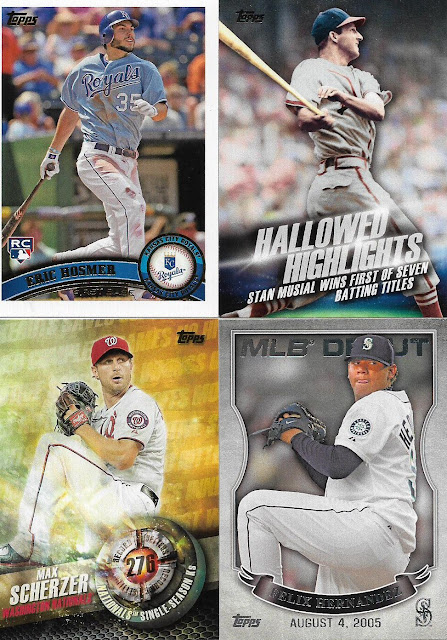 Bunch of inserts that don't interest me. 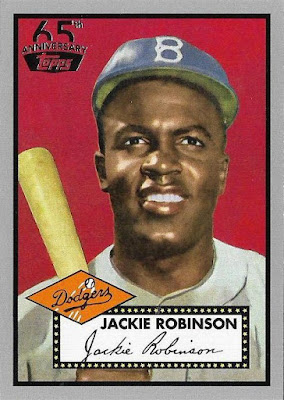 It's one of the 10-card 65th anniversary insert series that are retail only. This is the only Dodger, so that pleases me. It also allows me to do the following: 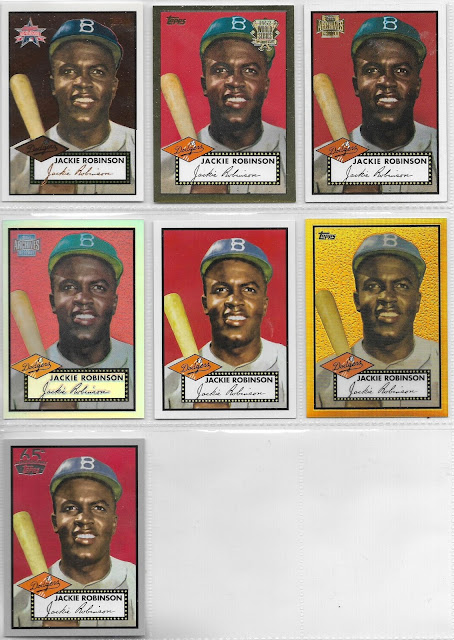 Those are the '52 Robinson tributes that I have. There actually should be 8, but I have no idea where the 1995 Archives Robinson is. Once I find that, I will grab one of the other ones that I KNOW is out there and Warhol y'all. 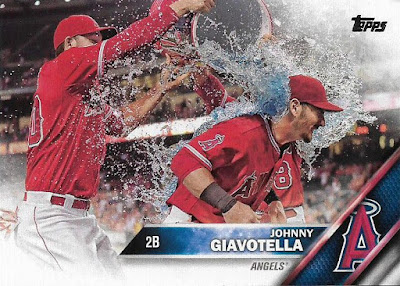 Some great, inventive photos, but the fog-effect really hurts things. 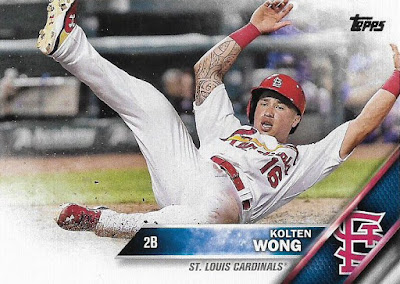 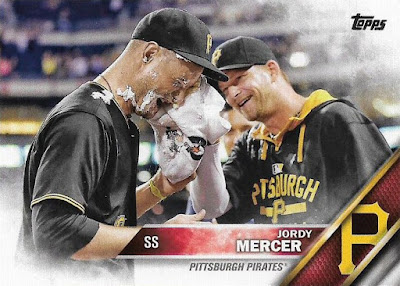 Not really the card I want to see if I'm a Jordy Mercer fan, but I know I'm out of touch. 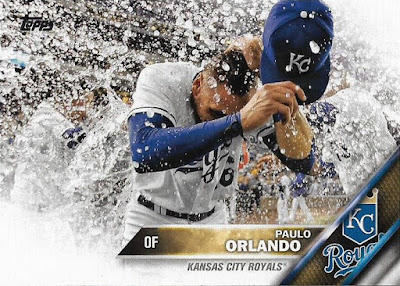 This photo is cooler than the Gatorade Joey Gallo bath from last year's Update. 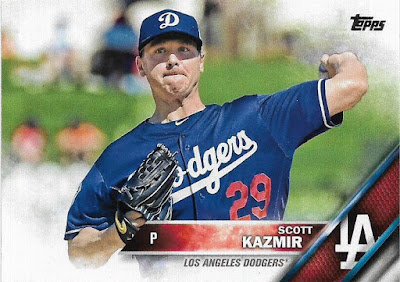 Yay! Last card is a Dodgers base card need!

Kazmir is featuring the "Chunichi Dragons" alternate cap that the Dodgers debuted during spring training. I don't really care for it, but that's inconsequential when there's money to be made.

Anyway, that's the only Series 2 pack break you'll see here. Any non-Dodger card is available or will be distributed in upcoming trade packages (yes, very exciting, I know).

I should be hopping on those trade packages in the coming days now that I have a somewhat reasonable schedule. No guarantees though. 2016 apparently is the year in which we MUST DO THINGS.

Stack22 said…
re: Swisher's inclusion, my feeling is that if you played the previous season, you should have a card in the set. For veteran players of any note, I feel very strongly about this. There should be a Topps card with full career stats as a bookend for a players cardboard career. I've always viewed the Topps base set as a sort of almanac for the previous season, rather than associating them with the current year.
June 30, 2016 at 6:10 PM

deal said…
1) I like Stack22's reference to Topps as Almanac. It is a good way to look at baseball cards.
2) The Padres/Brewers Card is appropriate as I have mixed up cards from those two teams in 2016T a number of times
3) I have been to target a couple of times and they didn't have looseys of 2016T in PA either.
June 30, 2016 at 6:26 PM

Zippy Zappy said…
Out of that lot the player I find interesting is Robbie Erlin. Former Rangers prospect who went to San Diego in the Mike Adams trade. Has a chance to be a really good back of the rotation starter in spacious Petco. Unfortunately his Tommy John surgery put him on the shelf for 2016.

As for Guido Knudson he was drafted by the Tigers back in 2011 and made his MLB debut last year but he was claimed off of waivers by the Pirates in the offseason. He was released by the Pirates like two weeks ago.
June 30, 2016 at 9:42 PM

Commishbob said…
If you have no use for the Derek Norris, Danny Duffy and McCullers cards, I could use them for my fantasy BB binder. I have a few things coming your way this week (or next week if I get lazy).
June 30, 2016 at 10:03 PM

ketchupman36 said…
First time poster, been reading your blog about a month or so.

AthleticGigantes said…
Fortunately for us baseball fans, the "mildly disturbing" Kelton Wong action shot is a familiar occurrence.
I wonder what people from countries not familiar with baseball would think if they saw this card?
This card would be a good example for a post entitled "What were they thinking?" if you took out the baseball context.
The Swisher card is another example. Cropping out the bat in Swisher's right hand would lead an English subject to believe Swisher to be acting out a scene from Monty Python's Minister of Silly Walks sketch.
July 1, 2016 at 7:55 AM