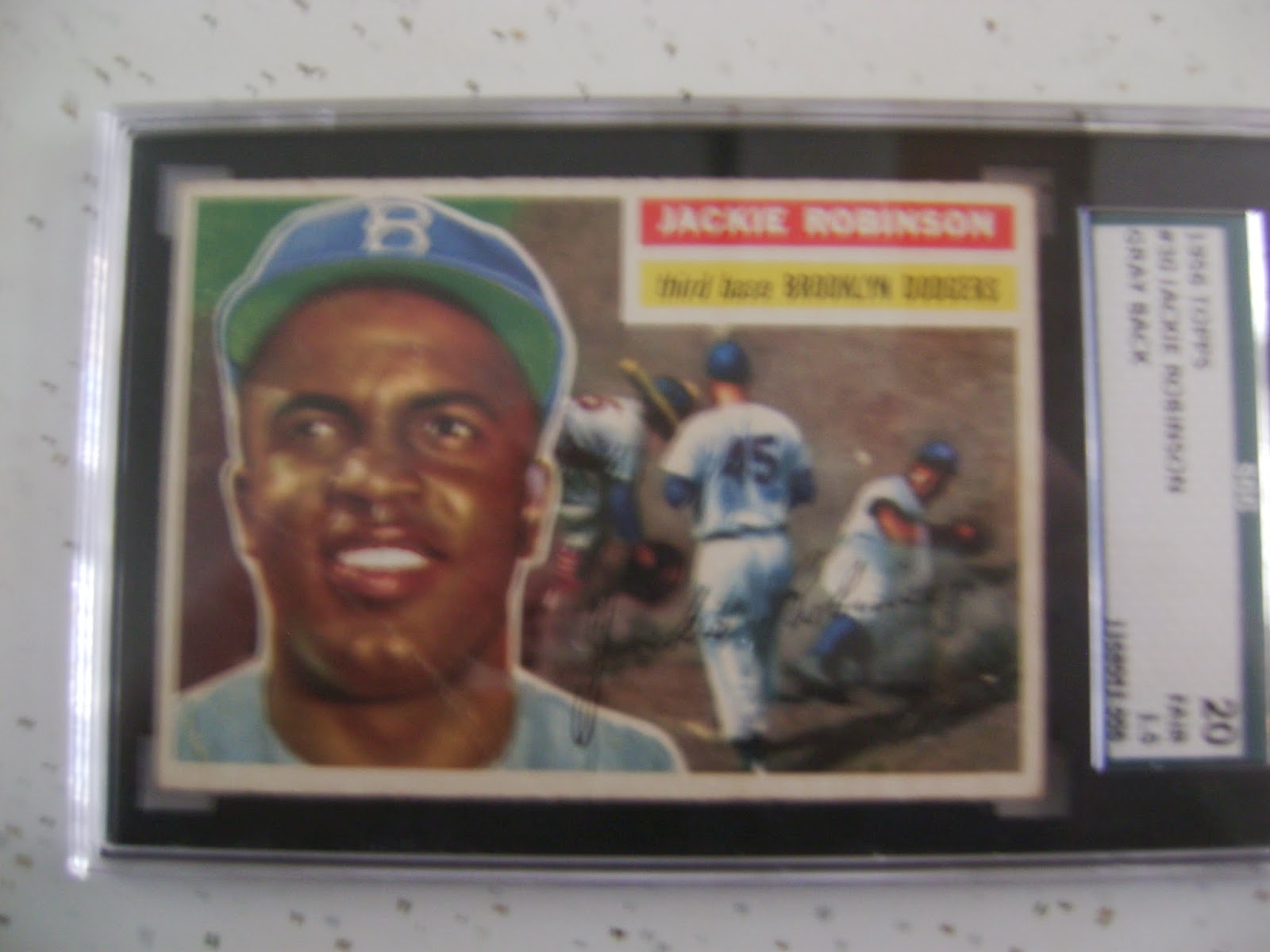 
INTRO. HOBBY SHOP. Sunday afternoon. Winter time. It's slow. The walk-in traffic is mostly men. They shuffle in and out without buying a thing. Forty-five minutes pass between customers.

A woman and a 10-year-old boy walk in. Mick bellows hello.


MICK
Looking for anything in particular?!?!?!?

WOMAN
Um ... sort of. My son collects cards and he likes (woman pauses like she's about to say something embarrassing) ... old cards.

The boy glares at her disapprovingly.

The woman shrugs with an apologetic grin. But the boy knows.

Mick knows he's seeing a child wise beyond his years. He leans over the counter and bumps his glasses down the bridge of his nose. His voice gets low, like he's about to speak in a language only he and the boy know:

The boy stares at Mick as if he just said the sky is blue.

Mick snorts, caught off-guard by the answer. But he's also pleased. Kids don't come in asking about old Jackie Robinson cards. Who are these people anyway?

The kid looks at Mick again like he just said the grass is green.


BOY
(Deadpan) You got any?

The woman looks anxiously at Mick and answers defensively:

The comment surprises Mick. But he walks over to the back wall and pulls a small chain of keys off a hook. He bends over, puffing and weezing from a 35-year marriage to cigars, and puts one key into a lock on a door under the counter. With great effort and ceremony, he pulls out an item in plastic and props it up on the top of the counter.


MICK
This (pausing for effect) is a 1956 Topps Jackie Robinson card!!! It is the final card from his playing career!!! Beautiful card!!!! It is what we call "off-condition"!!!! There are a couple of creases!!!! But the corners are sharp and so is the picture!!!! You'll note the card has been graded in "fair" condition!!!!!!

The boy stares with the same deadpan look, but then his mouth opens in horror. His eyes grow big, and seem to be piercing the card.

The woman grabs the boy who is jumping as he is speaking. The boy spins and accidentally knocks a display box of 2014 Bowman Chrome to the floor. The woman yanks the boy's arm and pulls him out of the store and into the street.

Mick stares with his mouth open, his hands still grasping the graded card of Jackie Robinson.

The boy is still muttering about the card as the woman drags him down the sidewalk with the boy's feet barely touching the ground. They turn the corner. There stands a man leaning up against a wall.

He is short with sandy blonde hair, probably in his late 40s. His nose looks like the beak of a bird and he has large expressive eyes. He calls to the two:


MAN
Hey! You want Jackie to be free?

It's two weeks after the incident in the card shop. The man on the street turns out to be a card collector like the boy. The boy's name is Jack. Jack doesn't know the man's name since the man only refers to himself as "night owl". But they are now collecting friends. Despite the age difference, it's not strange. The cards wipe away the years. Jack hasn't been able to go to the card shop since because he's haunted by the image of the encased Jackie Robinson card. But he's relaxed now.

Neither of them are playing pool. Instead, they're sitting, discussing old vintage sets. Jack fiddles with the vending machine buttons next to him.


NIGHT OWL
I've gone back and forth on the 1962 Topps set so many times.

NIGHT OWL
Yes, this again. The set looks very classy, but at the same time it looks ancient and proper -- almost too proper -- compared with other sets around that time. In some ways, it looks like the set went back in time, but in other ways it's innovative and timeless.

JACK
Yeah, when are we busting out Jackie?


NIGHT OWL
Shhhhh! Not so loud. I've got the card right now.

NIGHT OWL
What did I say? Not so loud! A friend got it for me. I don't want to name him, but let's call him "Jeff". Jeff and Mick kind of came to an agreement and now the card is mine.

JACK
Cool! So when do we bust him out?

THE BASEMENT of a residence. Night time, around 10 p.m. The area is dark except for a hanging florescent light.

The plastic-encased '56 Jackie Robinson card is sitting on a table blanketed with a red tablecloth. "Night Owl" puts on a pair of dark gloves, some goggles and grabs a hammer.


NIGHT OWL
Yo. You ready?

Can't you use pliers or something. Why you gotta use a hammer?

Night Owl positions the graded card so that a corner edge is hanging off the table. He's done this before. He gestures Jack to stand several feet back. He then raises the hammer in a motion straight out of the John Henry tail and brings it down on the corner edge. A sharp splintering sound echos in the cellar and jagged plastic sails out opposite to where Jack is standing.

Jack gasps at what remains. The plastic is now open on one side so the case can be split open enough to pull the card out. Night Owl lets Jack do the honors.

Jack, with a look of supreme concentration, slowly eases the card out of its prison. We fade to -- 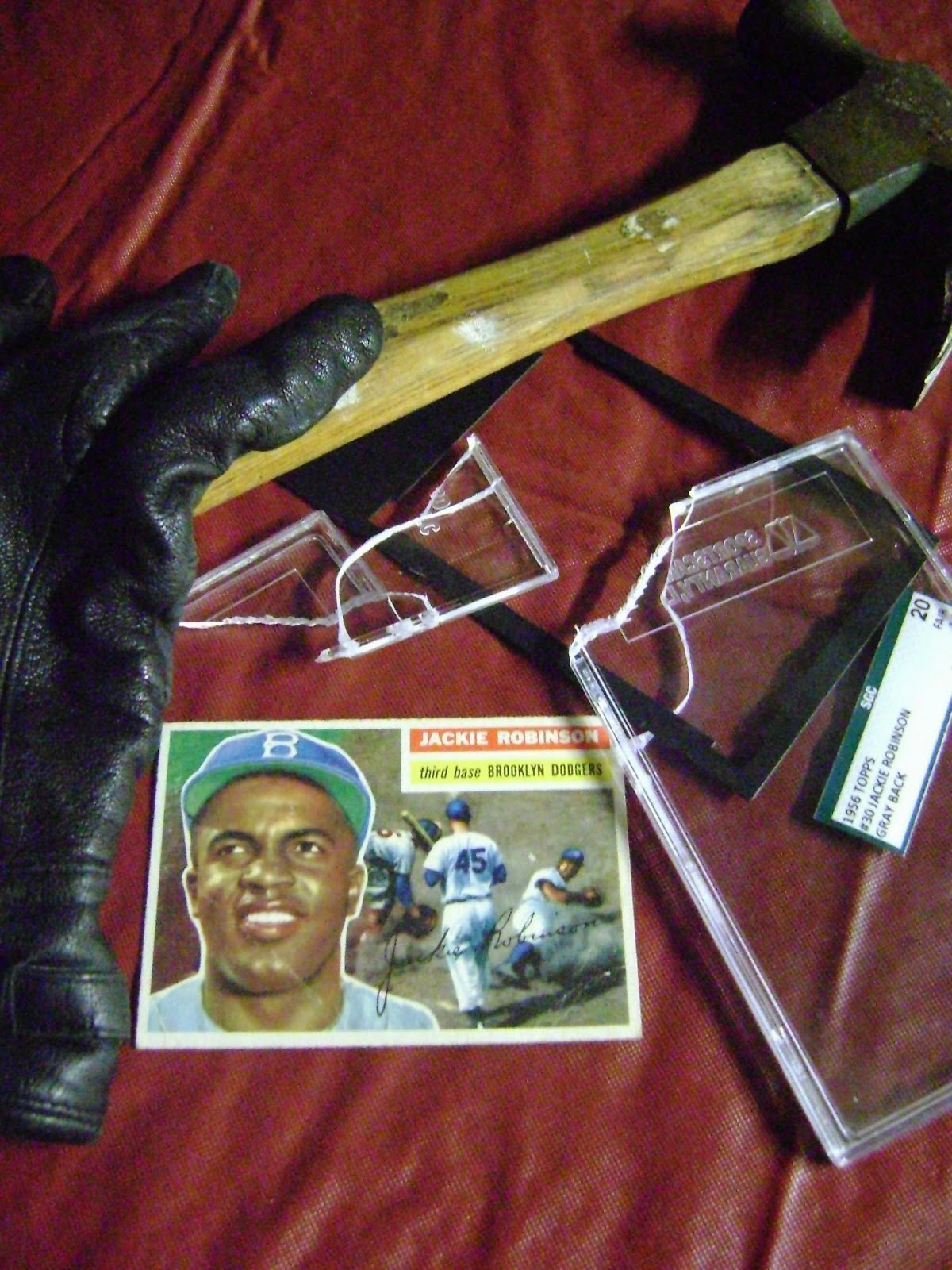 JACK
I want you to have him.

JACK
I want you to have the card.

JACK
(Laughs) You saw how much my mom was going to pay for that card in the card shop that time. I can have whatever card I want.


NIGHT OWL
As long as it's not graded or else you freak out.

JACK
At least I'm not almost 50 in my basement talking to some kid about cardboard ...

Night Owl has stopped listening. He's just staring at his new 1956 Topps Jackie Robinson with a couple of creases but with sharp corners and a sharp picture, graded fair, and best of all ... 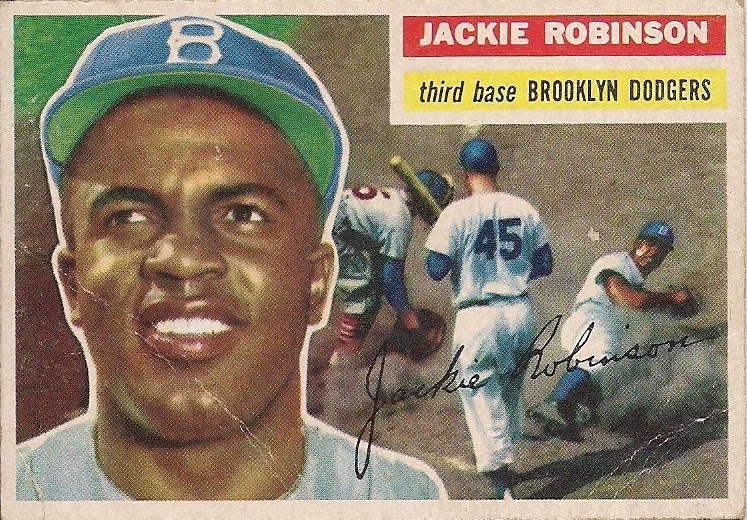 Many thanks to Jeffrey of Cardboard Catastrophes for sending me this card. His good fortune is now my good fortune and I am very appreciative.

steelehere said…
Do you have a want list posted somewhere on which cards you need to complete the entire 1956 Topps Set?
February 23, 2015 at 8:03 PM

JediJeff said…
Ahhh shit. I thought I was the Jeff and was about to get a Jackie card in the mail.