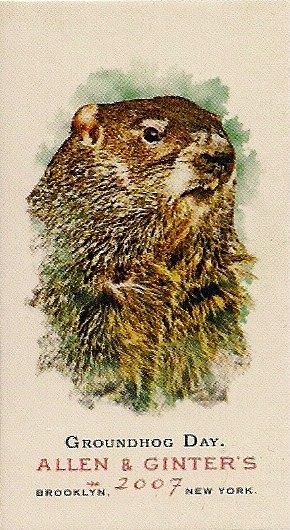 Groundhog Day -- how pleased am I that this is in my mini frankenset binder? -- still has some meaning here in the Northeast as I simply want winter to end so that announcers and meteorologists will stop calling it "the white stuff". But for everyone else the day probably correlates to getting stuck in a rut.

Thanks to the Bill Murray-Andie McDowell pic, a lot of people equate Groundhog Day with reliving the same moments over and over again.

And as I get older there is the temptation not to view that as a bad thing, but as a good thing. It's comforting when the same events take place repeatedly. You know how to react. There's less of a chance of looking stupid.

Today I found out I won two Bip Awards, one for Best Recurring Subject and the big one -- Blog of the Year. Including the old awards show conducted by Jaybarkerfan's Junk, that's four straight Blog Of The Year trophies (hey, I still don't have any trophies!) for NOC.

Talk about getting stuck in a rut. That's a good kind of rut.

But my point is that I'd like to think I keep winning Blog Of The Year because I try to avoid getting into a rut. I try to make this blog as interesting as I can. I don't spend a great deal of time thinking "will this appeal to readers?", but I do spend a lot of time thinking "will this appeal to ME?" And then I get lucky because often times what appeals to me appeals to others.

I trot out a lot of features and various topics because I both bore easily and am deathly afraid of getting into a rut. Boredom is the enemy of any blog. If you get bored with your topics, then the worst thing you can do is continue to write them. You're wasting your time.

So, when I see a topic I don't like, I scrap it. Sometimes I'll make a big noise about it on the blog, sometimes you won't notice the topic is gone. But often, there will be a new topic in its place. Because baseball cards are always exciting, and there are always interesting things about them.

Still, there are times that I am aware that I'm stuck in one thing -- my thinking. Yes, I carry on about the '70s and vintage in general too much. Yes, I rag on modern cards too much. And some of my ideas about sets may be a little outdated and need some changing.

And as much as I think "that's what makes me lovable night owl", here is one idea that I'm going to tweak.

I know what you're saying. You're saying "who cares" "where did that come from" and "this is HUGE" all at the same time.

I'll tell you how this came to be.

I received a few cards from J.T. of The Writer's Journey a little while ago. A couple of the cards were 1983 Donruss Dodgers. 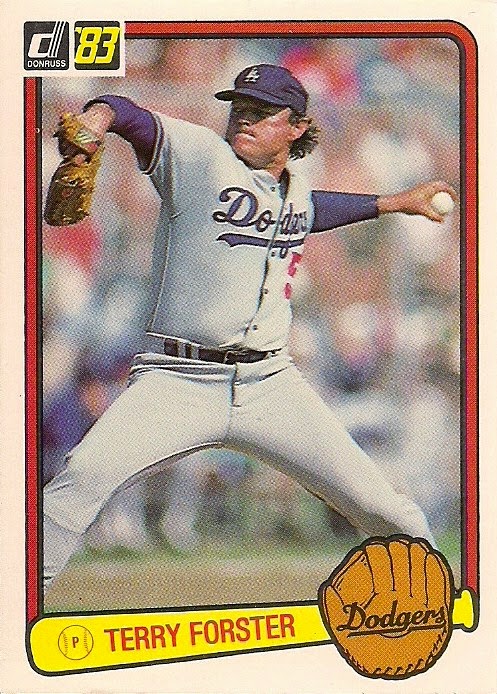 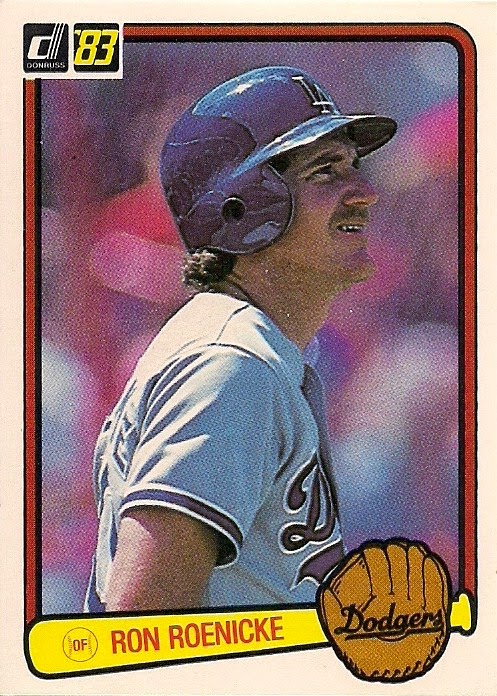 I have laughed at 1983 Donruss from the moment I pulled the first card out of pack in 1983. As someone who collected 1982 Donruss the previous year, the '83 set was much too similar and showed a lack of innovation and laziness.

I've written about this many times before and there has been no swaying me from this opinion. For decades.

But something has happened.

I now can appreciate the slight alterations made by 1983 Donruss. 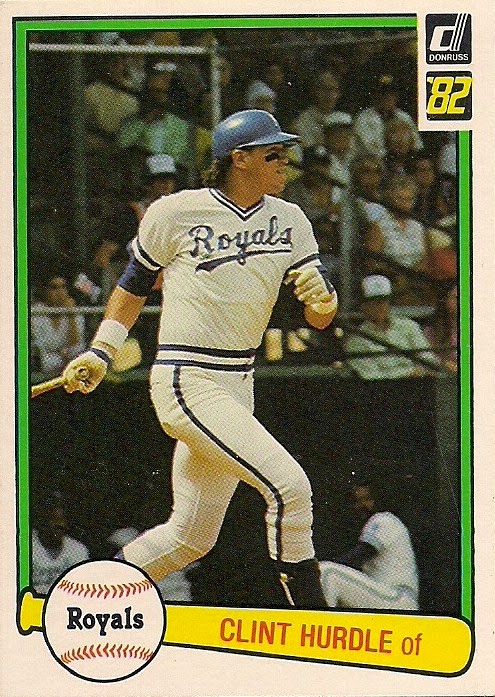 1982 Donruss may have invented this look (although it's hard for me to believe Topps didn't throw out this idea in one of its meetings somewhere in the early 1960s), but I think the changes made by '83 Donruss are more pleasant. 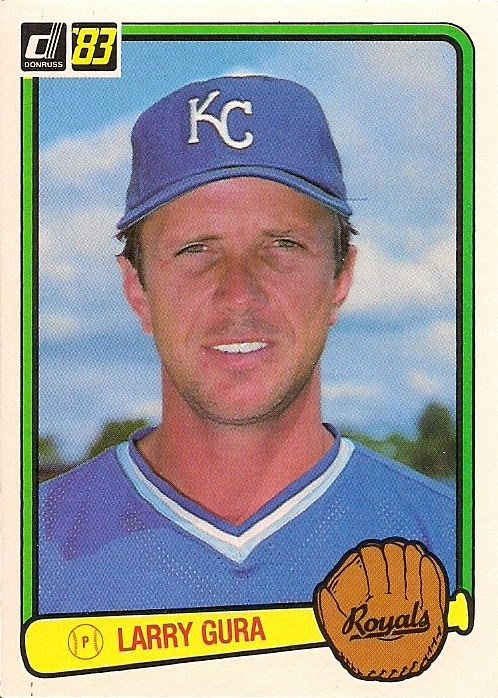 The rounded corners give the card character. It's almost more "friendly" if a card can be friendly. Switching the Donruss logo from up-and-down to side-to-side is a subtle pleasing change. I'm not crazy about the position logo (too small), and swapping the baseball for the glove wouldn't be my choice, but when I look at '83 Donruss now I am not filled with rage about it copying the 1982 Donruss design.

Back in '83 I was so disgusted with Donruss that I stopped buying those cards. To this day I have fewer cards from 1983 Donruss than any major set that was released during my first collecting period between 1974-83. Aside from completing the Dodgers team set and a stray card or two, I have not added or erased any cards from that original purchase of 1983 Donruss packs (I did give away an '83 Donruss Ryne Sandberg rookie card in a contest a few years ago).

So I thought that as a long overdue overture toward 1983 Donruss I would show all of those cards that have been sitting in a box untended for so long, most of which have never appeared on this blog. 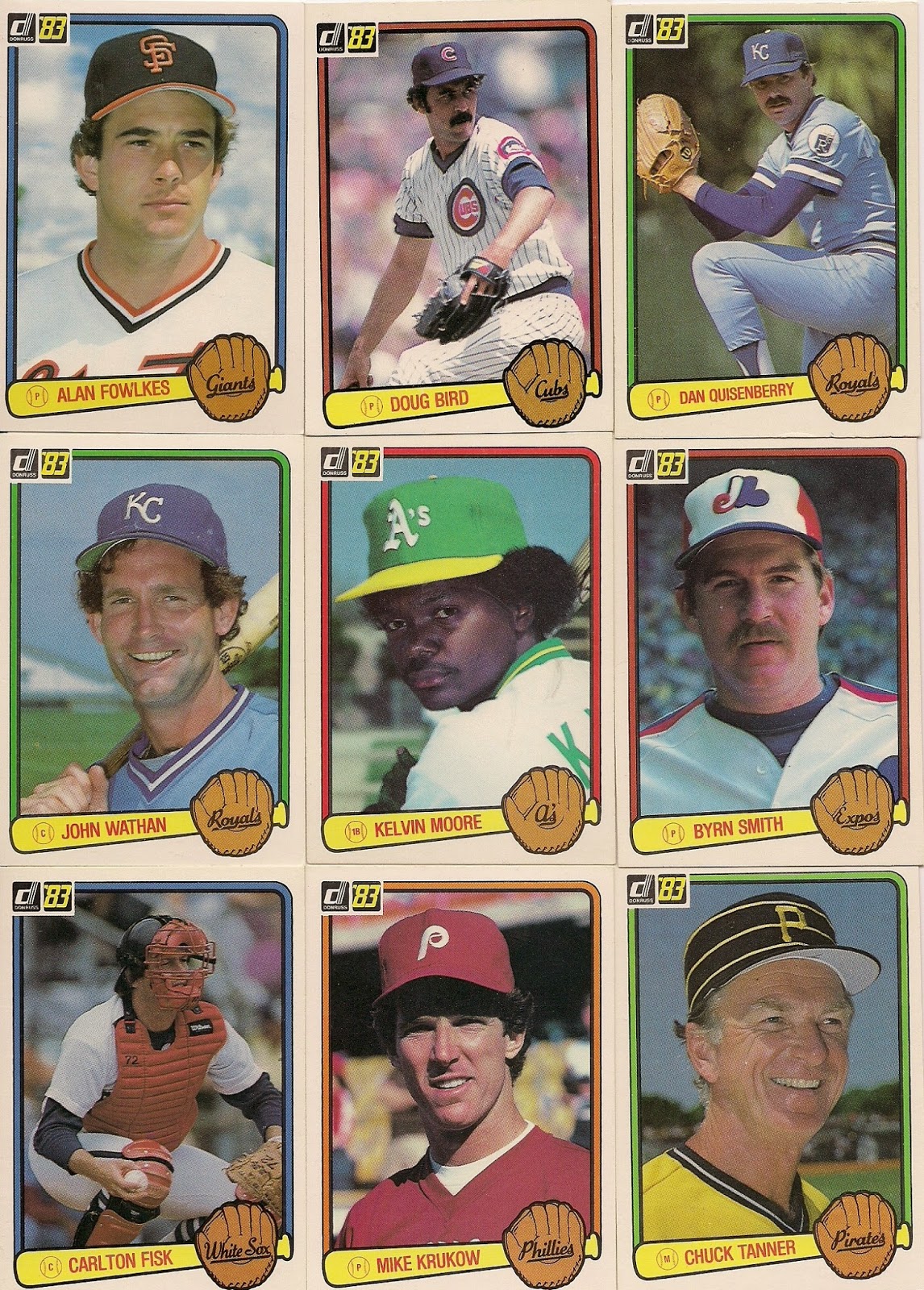 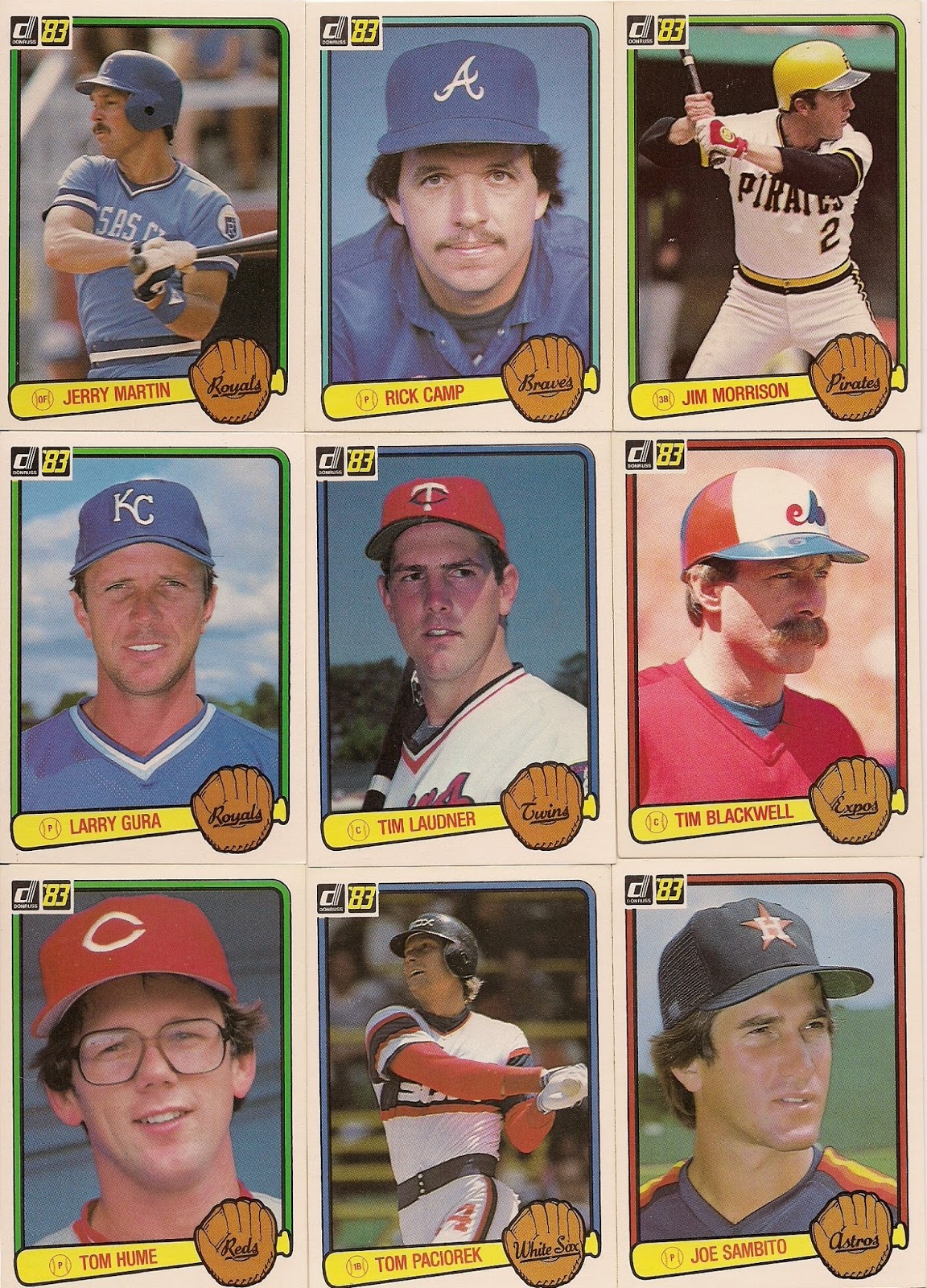 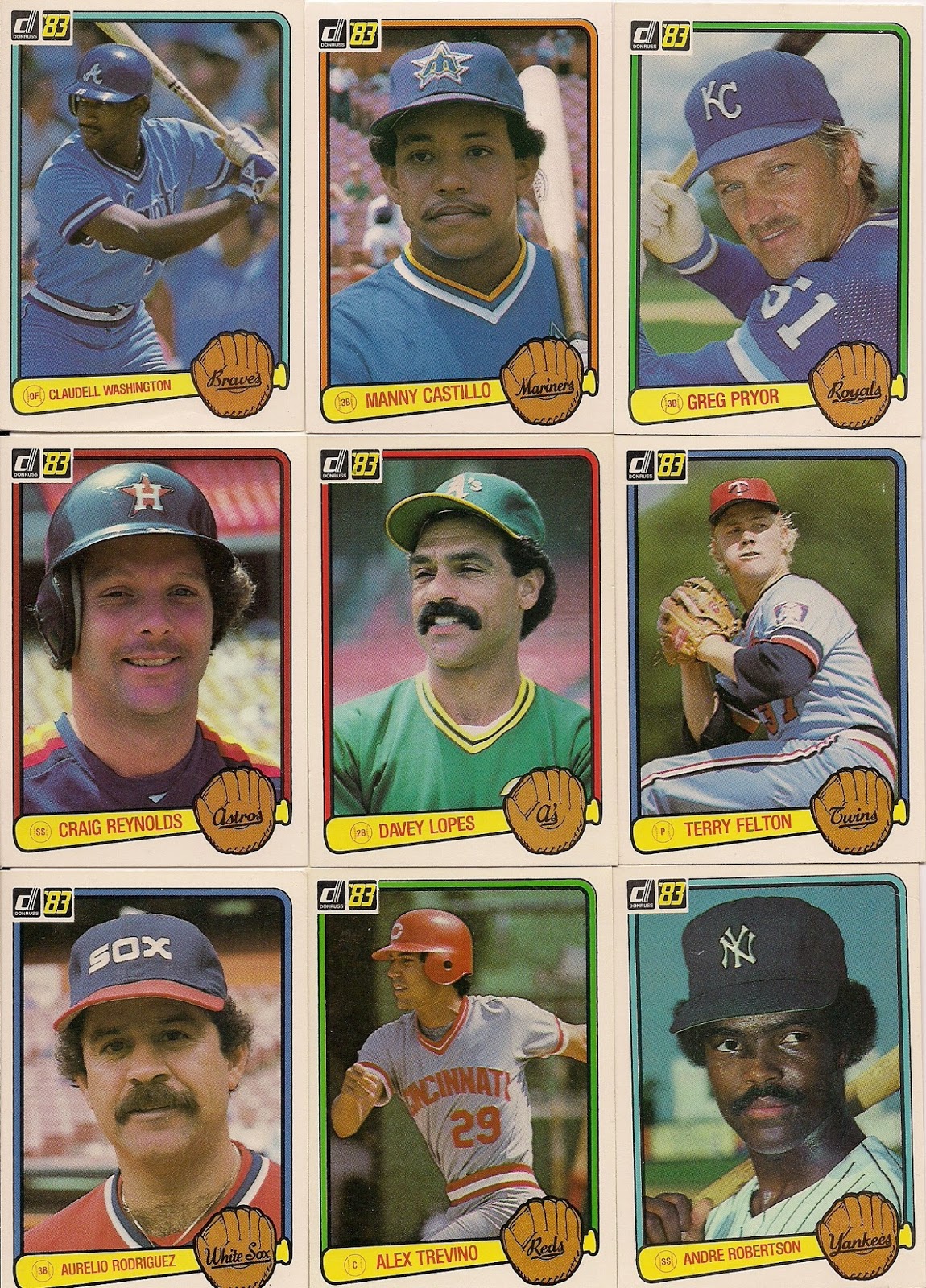 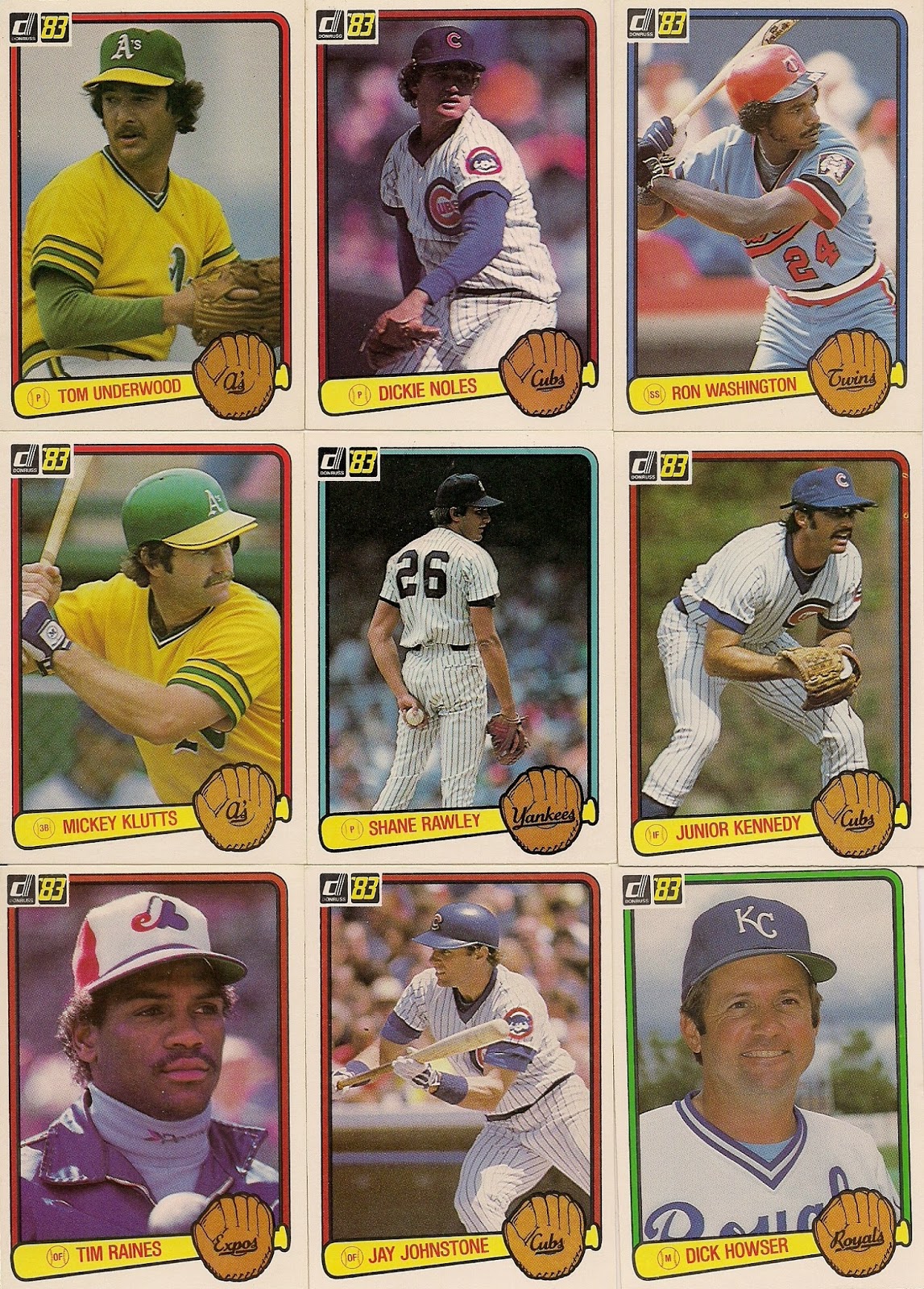 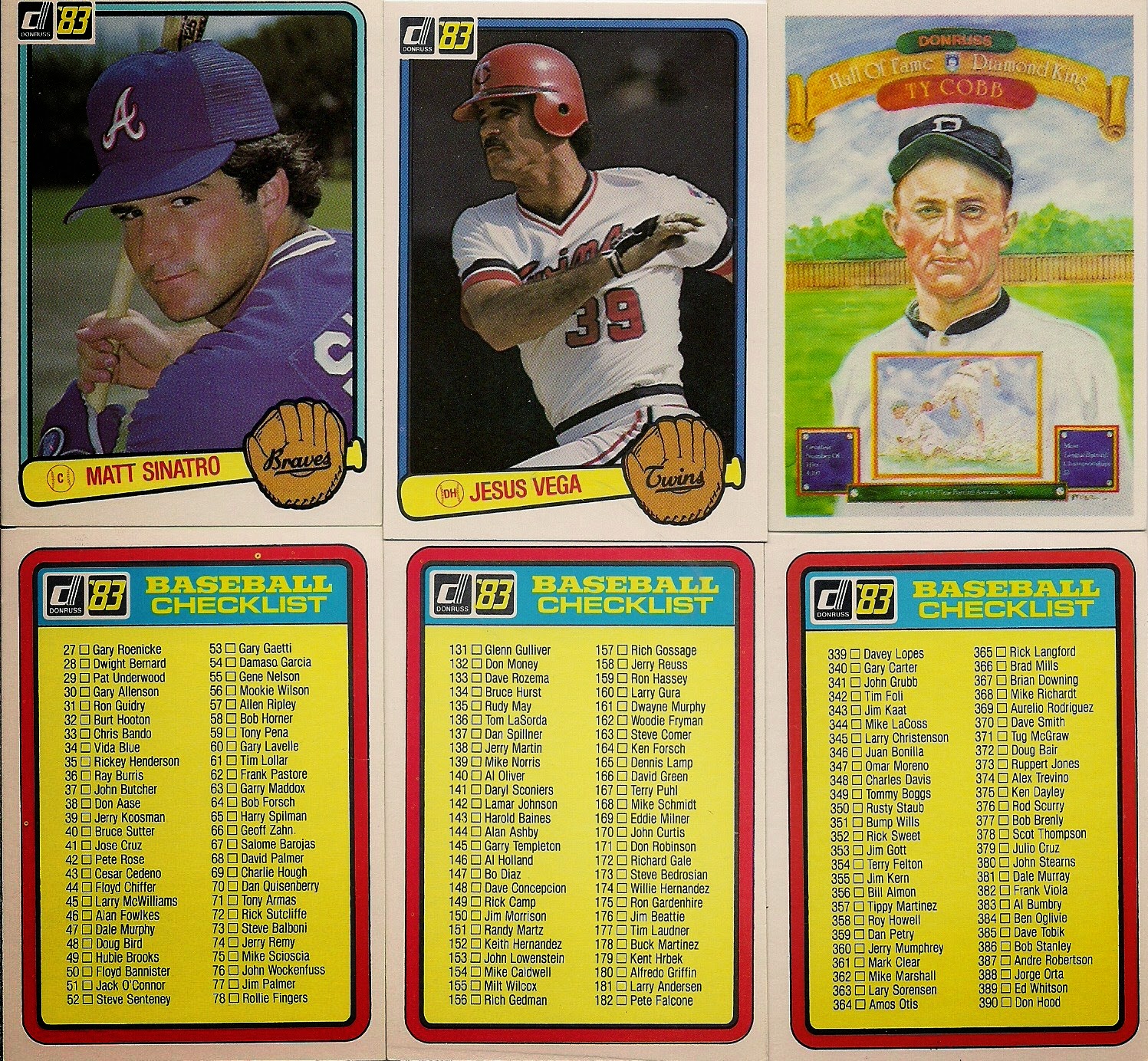 Now, I'm not saying I want to collect this set. It's still not very good. There is no need to send me 1983 Donruss cards.

But I am saying that if you come across one of those earlier posts in which I tear '83 Donruss to shreds for being unoriginal, know that this night owl can changes his stripes. Or learn new tricks. Or whatever tired expression you want to use for not being stuck in a rut anymore.

Thanks for voting Night Owl Cards blog of the year once again.

I'll try to keep supplying a wide variety of stupid cardboard stuff just like this.

Nick said…
"Yes, I carry on about the '70s and vintage in general too much."

This is not possible.

JediJeff said…
"...and the big one -- Blog of the Year. Including the old awards show conducted by Jaybarkerfan's Junk, that's four straight Blog Of The Year trophies (hey, I still don't have any trophies!) for NOC."

Unknown said…
Congratulations on a much-deserved accolade!
February 2, 2015 at 8:54 PM

Paul Hadsall said…
Congratulations on winning the awards. To be fair to everyone else, it's probably time to elevate you to "legend" status and make you ineligible for future ones.
February 2, 2015 at 11:45 PM

Billy Kingsley said…
congrats on winning the award. Your posts are always entertaining to read, even to somebody like me, who knows very, very little about baseball- my knowledge base is built almost totally from SportsCenter and reading blogs and the Trading Card Database.
February 3, 2015 at 6:46 AM

BobWalkthePlank said…
Congrats on the award. Very deserving!
February 3, 2015 at 8:43 AM

Matt said…
Congrats on winning! I had predicted it from the start as you are a blog dynasty!
February 3, 2015 at 8:49 AM

Brian said…
Congratulations on the much deserved win. I have been reading your blog for less than a year, but in that time I have come to really appreciate not only the content you create, but also the bar that you've set.
I feel that creating something of high quality not only is valuable in and of itself, but also in the way that it inspires and challenges others to try to attain a similar level of quality.
February 3, 2015 at 9:42 AM