Like it or not, more thoughts about the newest baseball cards on the planet 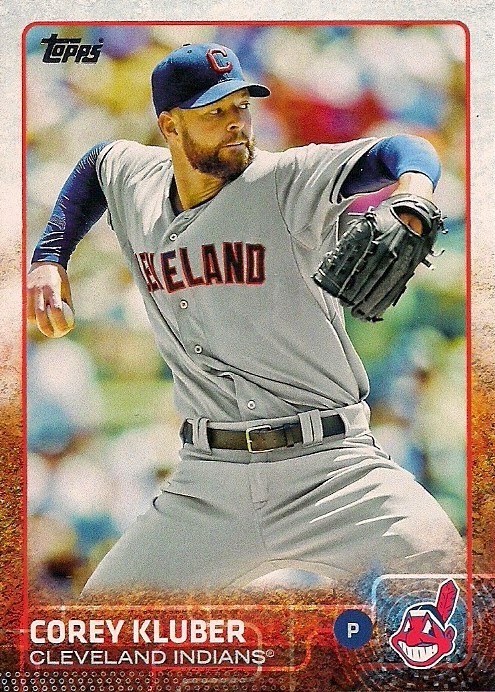 I've got a few more thoughts about 2015 Topps and I won't apologize for showing these cards again. This moment comes around only once a year. I have 11-plus months to show random cards from the past.

I already mentioned all of the things I like about this year's cards, the changing border colors, the interesting design, the clear and thoughtful backs. It's really a terrific-looking set.

But it's not all good. There is a lot of repetition in this set carried over from the previous year and the years before that. The League Leaders cards, the super-close up shots on faces, the sometimes-horizontal cards (all packaged together in your hanger box), the collation issues, the overemphasis on players who didn't play in the majors last year, the excessive number of boring inserts.

And here's something that bothers me and possibly anyone else who collects who deals with publication layout of any kind: 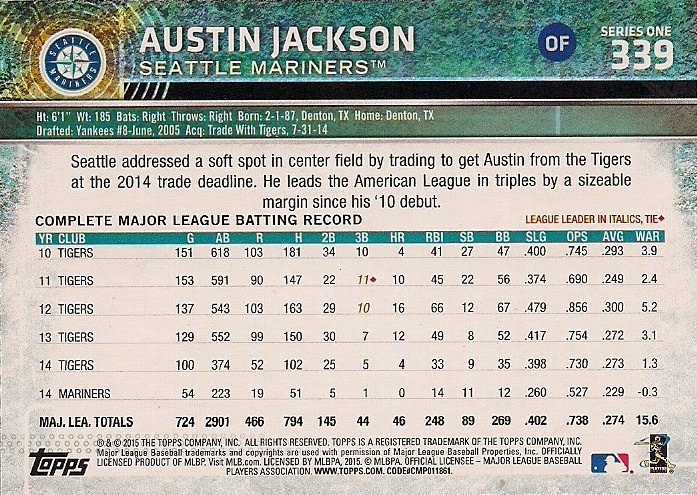 The write-ups are giving me the shakes.

It doesn't have to do with the words. The words are fine. It's the typesetting issues. The paragraph is center-justified, which means that if you don't have enough type to fill out the line width, it's just going to hang in the middle like the third line there. It looks awful. Left-justify that baby!

The other issue is the leading (the space between lines). The problem is that last line again. There isn't enough leading between "margin since his '10 debut" and "Complete Major League Batting Record." It's too scrunched and it makes my face too scrunched!

There also is quite a bit of spacing out of individual years in some of the career stats, which will irk designers, too.

That's a lot of talk about type, so let's move on to something else. 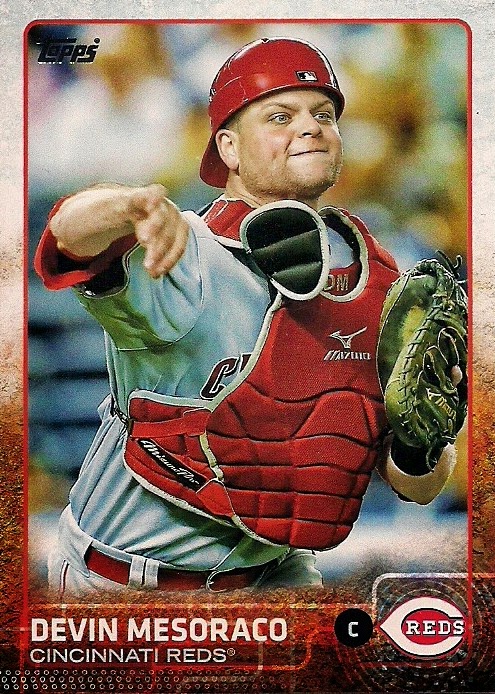 He is freaking me out.

I think we'd better go back to the backs again.

I looked through the modest assortment of cards I've collected so far and picked out the 3 most interesting writeups on the back. Yes, you're going to have to look at more center justification, but if I can handle it, you can. 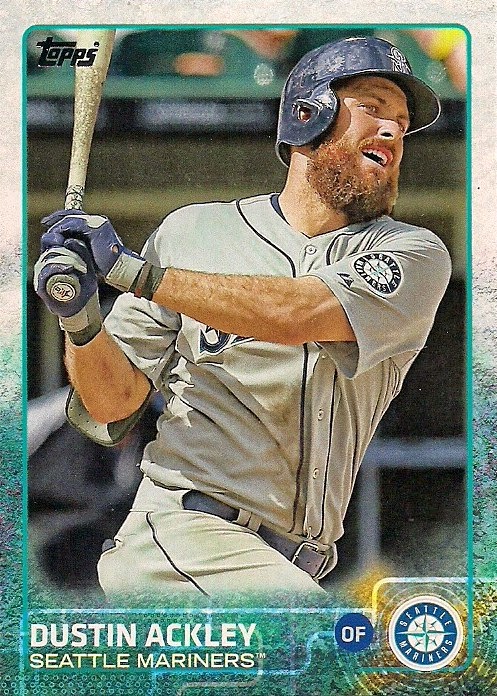 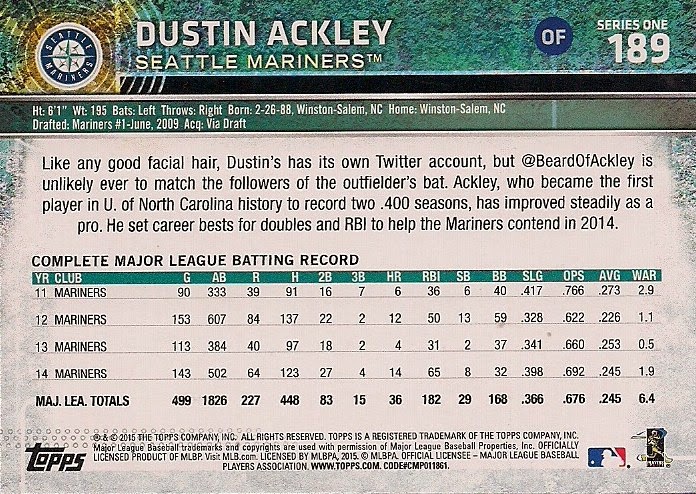 Dustin Ackley's beard has its own Twitter account. Of course it does. And we complain we don't have enough free time. 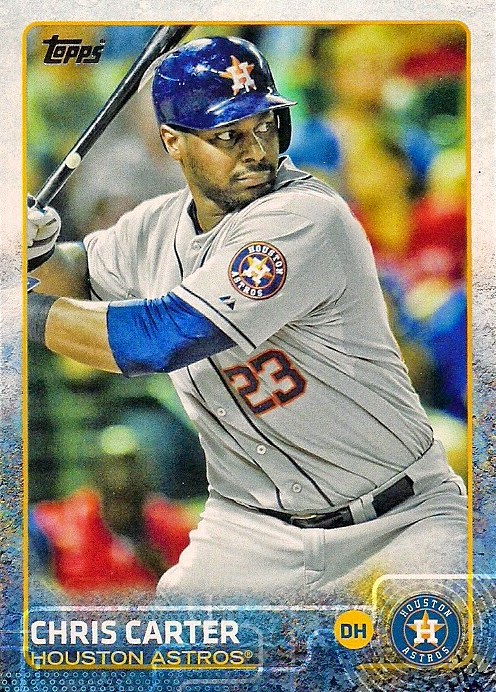 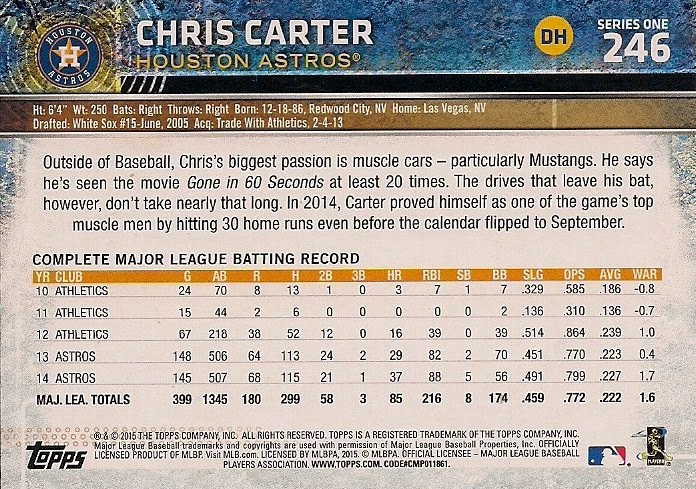 Speaking of free time, baseball players have it. I know I'm not much of a movie watcher, but I can safely say my record for watching the same movie is maybe 5 times. 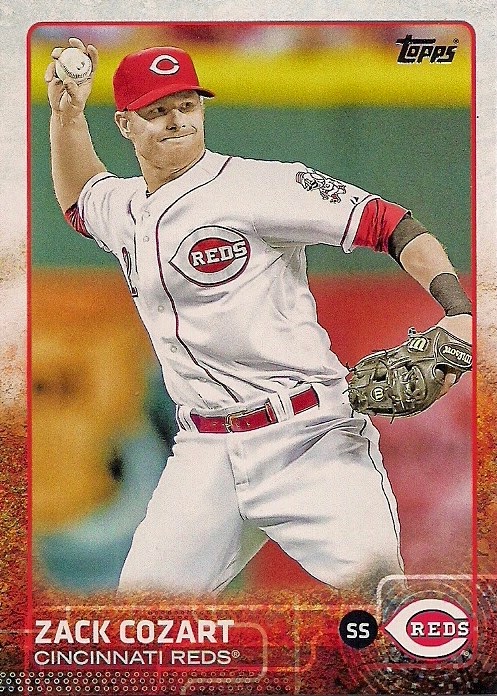 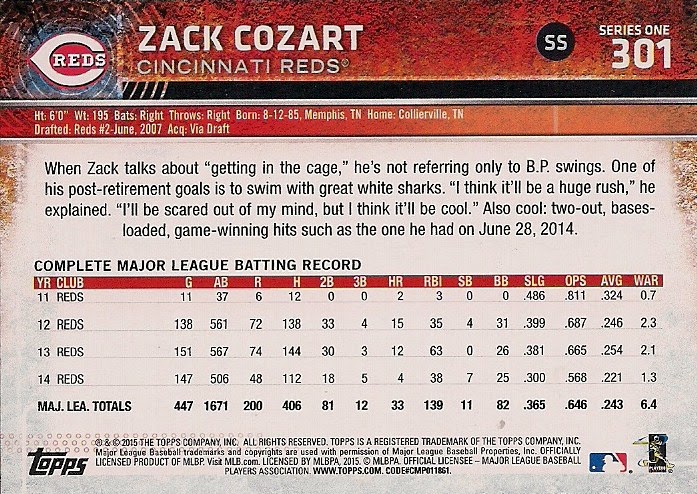 Another adrenaline junkie. Swimming is too intense for me let alone doing it with great white sharks. My huge rush come from opening packs of baseball cards. 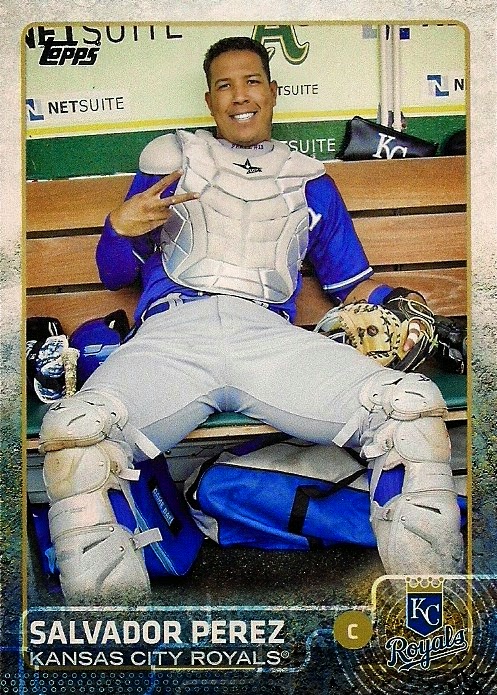 I hope you read Cardboard Connection, but if you don't, this is how you can tell: Check out the fine print at the bottom of the card on the back. There is a code in bold lettering featuring a number at the end. Base cards end in "861". 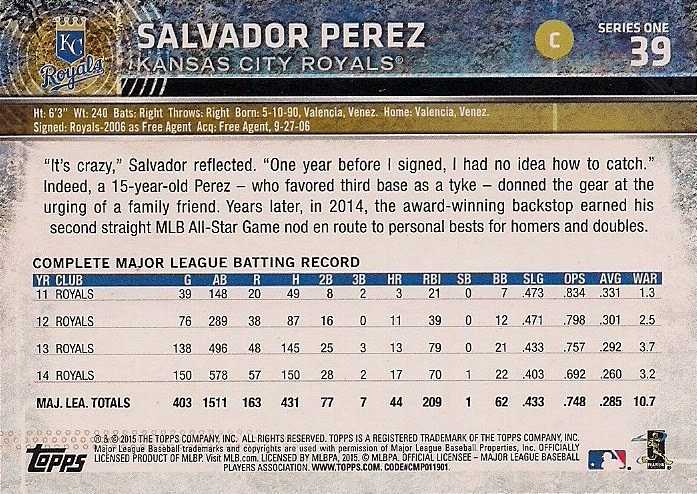 But if the code ends in "901", then you know you have a photo variation.

I don't know what I'll do with this card. I'll probably trade it if the right card comes along. But I do like it quite a bit.

Finally, I've been thinking more about what to call this set.

As mentioned in the last post, I like "Stucco Set" and "Fingerprint Set." But I know there's still something better.

I keep coming back to the team logo and what's behind it, which is also repeated on the back of the card.

No, not the wine or the ice cream. The ripple effect. It's used all the time to replicate an object dropping into the water and displacing it so that it creates a ripple. 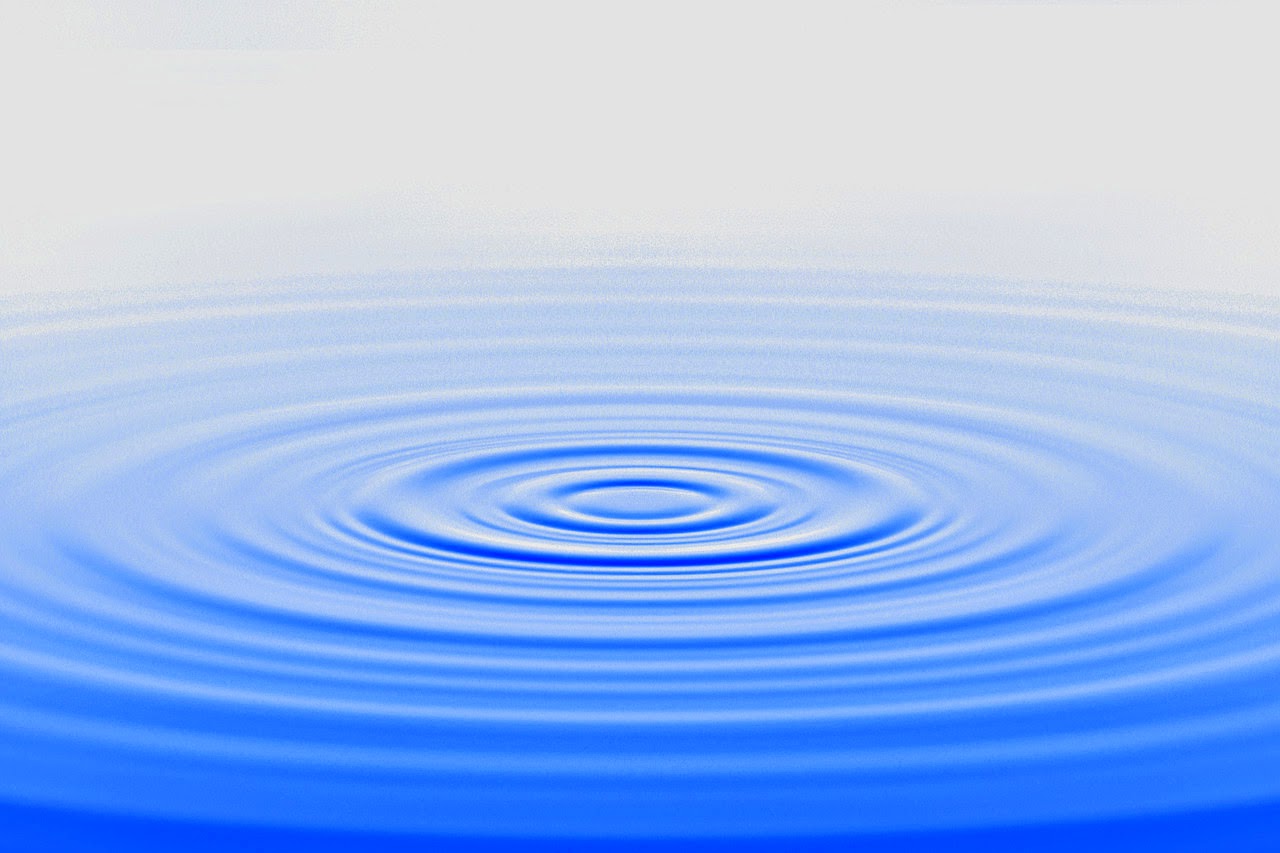 This is now what I'm going to think of when I see these cards.

Unless I find something better, I'm going to start calling it "The Ripple Set."

That's all the thoughts on 2015 Topps I have for now, but I'm not done with posts about the set. I have at least one more in mind, and I'm sure there will be others.

cynicalbuddha said…
How about the tune in Tokyo set?, I will say these cards will look awesome all chromed out later this year.
February 7, 2015 at 9:06 PM

steelehere said…
The ripple around the logo also looks like a vinyl record with the lines representing different songs.
February 7, 2015 at 10:10 PM

hiflew said…
It might be a couple of years past its prime, but the first thing I thought of when I saw this set was CSI. So perhaps this can be the "CSI:Topps set"
Or maybe you are right and there is a better name...in the pond. YEAAAAAAAAAAHHHHHHHH!!!!!
February 7, 2015 at 11:49 PM

Billy Kingsley said…
I really like the design. The center justify doesn't really bother me too much, but I can see it could be slightly distracting on the cards where the text doesn't fill the lines totally, like on the Jackson card shown.

I wish the card companies would make the variation numbered 39A (using the Salvador Perez card as an example) or even make it a SP with a different number. While I have mixed feelings on SPs in base sets, at least if it was a different number you'd know easily and without question you are missing the card from your collection.
February 8, 2015 at 3:52 AM

flywheels said…
Only problem with calling it the Ripple set is that word only conjures one mental picture in my mind....Fred G. Sanford!
February 8, 2015 at 7:52 AM

James said…
I like the variations but I like Billy's idea about numbering the variations 39A, 39B, etc. My eyes aren't good enough to easily read the code on the back and it's especially hard if you're scanning through a whole stack to pick out variations.
February 8, 2015 at 4:38 PM

Ana Lu said…
These base cards look all like insert cards. I don't know why but the design for this year I picture it as for insert cards, not for base cards.
The rest is just Topps messing around with us.
February 9, 2015 at 4:18 AM

GCA said…
Reminds me of Aquaman using his telepathy to summon sea creatures. And that background looks like the ocean floor....