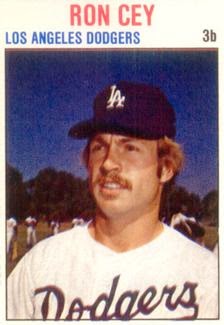 It is Ron Cey's 67th birthday today and I still don't have this card.

I have to make it all about me, don't I?

This Cey image, which I nabbed from the Trading Card Database, is from the 1979 Hostess set. It's Cey's last appearance in the Hostess series, because it's the final Hostess set from the time period in which he played.

Cey was featured in all five of the Hostess sets from 1975-79. I imagine there were 30 or 40 other players who also made all five sets (I'll have to do some research someday), but I still consider it an achievement for my favorite player of all-time.

The 1979 Hostess Cey card is a short-print as some Hostess panels were issued only with "less popular" snack cakes (I'm dying to know which cakes featured the Cey card). The card is on my Nebulous 9 list and I'm guessing it's going to be there for some time. I search for appearances of the card online and I almost never see it. And I know when it does appear, some high-roller probably snagged it for an insane price before I even noticed.

But I hold out hope that I will find it someday because it features my favorite player and it's the only Hostess card of Cey's that I don't have. 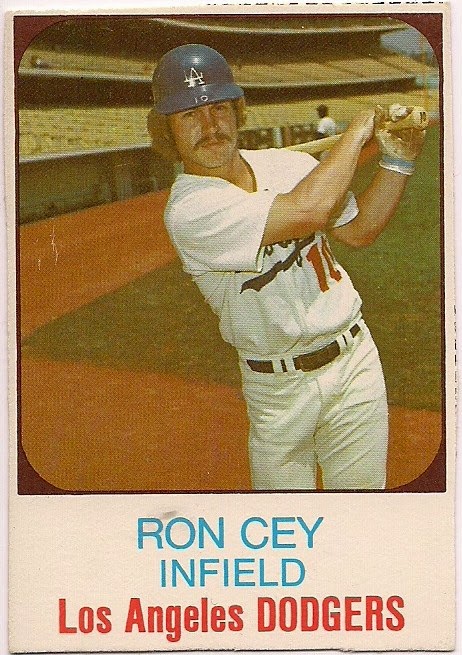 That's Cey's first Hostess card, from the 1975 set. Notice the photo corners that would disappear for future Hostess sets.

As far as I know, this is the only Cey card besides his Topps issue -- the best card ever made -- that you could get in 1975. Both the Hostess and Cey cards are now 40 years old. 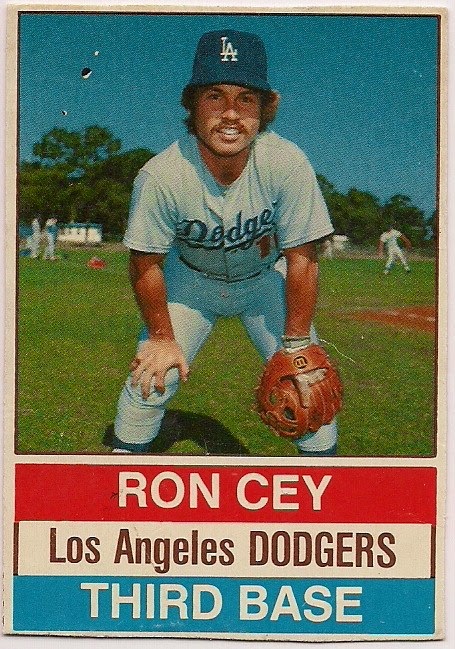 Hostess went with Cey in the field for its very patriotic 1976 set. Unlike the Dodger Stadium shot on the previous card, this photo was taken at spring training ... or at a residential park somewhere. Cey's glove looks exceedingly small. 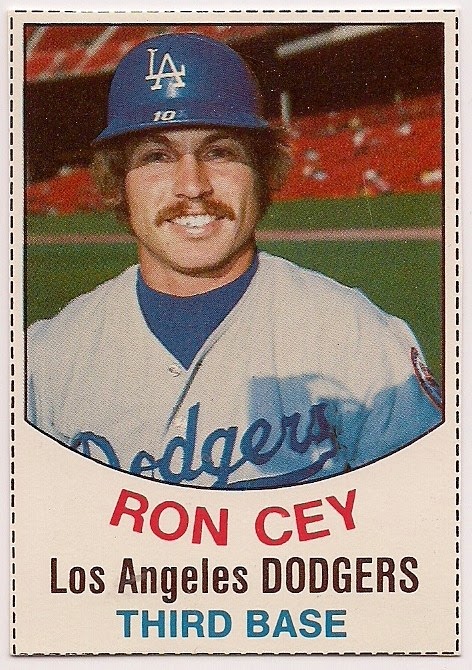 Cey went in for his close-up in 1977. I'm not sure where he is there, San Francisco maybe? His helmet is on slightly crooked (this is a future blog post. Yes, that's what I said. A blog post on crooked hats. I've been around for more than six years here, the ideas aren't endless).

1977 was the first year that you could find a Kellogg's 3-D card of Cey, too. Kellogg's was a little late on discovering Cey's greatness. Truth be told, I always preferred Kellogg's cards to Hostess -- Hostess was too "make the card yourself, buddy".

But, on further analysis, Hostess had the bigger sets and presented the photos better. Let's face it, Kellogg's was a gimmick. 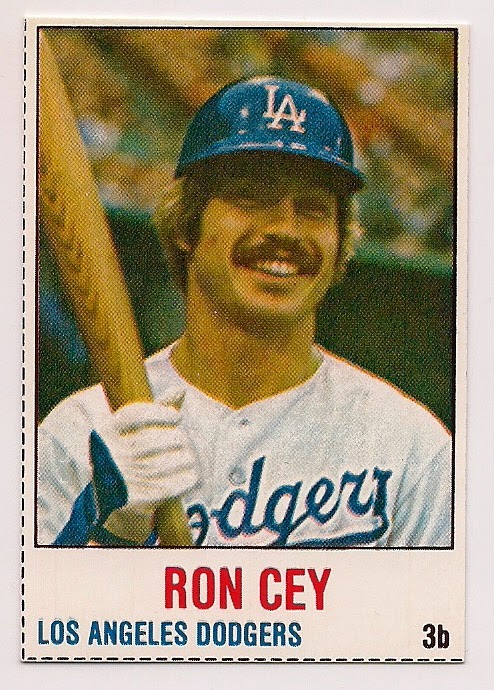 The 1978 Hostess Cey card is the 1978 Topps Cey card a few clicks before or after. Cey is more candid on this card and not as posed. I kind of like this one better.

It is my Ron Cey white whale, really the only Cey card that I don't have that bothers me.

Cey is not the only SP in the set, here is the list of those cards:


Stupid kids and their overwhelming preference for Twinkies.

Here is the panel that I wish I owned:

I'm sure Richard and Luzinski collectors are lamenting the same tune.

When -- not if -- I land my '79 Hostess Ron Cey card, I will be happy with those five Cey cards. I know there are back variations depending on which cake the card came with, but I can't be bothered with those kinds of variations.

The base card is enough work as it is.

Happy birthday to the Penguin!

night owl said…
I refer to that set as the 1976 SSPC set, as no one could purchase it until 1976, no matter what the copyright on the back says. This link helps explain my thinking:

Another point in the Hostess sets favor over Kellogg's is that they worked with Topps to design them where as Kellogg's was done by MSA.
February 15, 2015 at 8:53 PM

Jamie Meyers said…
Bill Singer signed a 75 Hostess for me a couple years back. He was amused when I told him I had cut it off a box of cup cakes and kept it for 35 years. Interesting piece on the SSPC set. I always wondered about that.
February 15, 2015 at 9:11 PM

mr haverkamp said…
Spent some time at the Natl convention in Cleveland this year looking for 2 of those Cey cards (panel for my set, individual card for you)....and came up completely empty. Keep up hope, am sure they're out there!
February 17, 2015 at 7:00 PM

BaseSetCalling said…
they created some cards as singles to go in some sort of single-cupcake vending machines...
February 17, 2015 at 7:52 PM