Erasing history ... and some cartoons 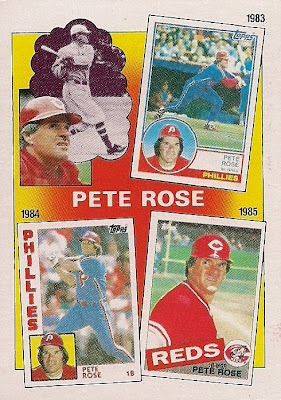 I apologize if you've seen all this nonsense on Twitter already today. It's just that I spent all of my free time today looking up baseball cards and I don't have any time left to come up with anything new.

Besides, it's not every day that you end up on Yahoo! Sports.

A few weeks ago, when 2013 Topps cards first hit shelves, several people in the hobby noticed that Pete Rose's name was expunged from the backs of its cards. Topps was doing this "Career Chase" thing and mentioning how far away individual players were from all-time records on the back of each card. Topps mentioned the name of the record-holder in all cases, except when it was talking about the all-time hit leader.

No mention of Rose.

But you probably know all this already because even if you don't read all of the hobby publications, you do read my blog, right? And I mentioned the same thing a couple of weeks ago.

Well, someone with a big powerful media presence -- i.e. the Chicago Sun-Times -- stumbled across the same thing a little more recently while leafing through his cards and wrote something about it yesterday and, lordy, lordy, everyone in the world has now noticed it. It's been picked up everywhere.

I'm always amused when a larger media entity swoops in on a story that was first covered by a smaller group of media. This happens all the time in the news business. A small newspaper reports on a crime or development going on in their coverage area, and something about it sparks the interest of a larger paper or TV station. They swoop in, the story becomes national news and the smaller media folk -- who were there from the start -- grumble about how the big wigs don't know what they're talking about.

It's a turf war. It's "I was here first." That's all it is. But interesting is interesting. You can't control when people get interested.

However, the people who make a living writing about the hobby have a point about one very important aspect. They deserve to be upset about the mass media's take on this topic. It's uninformed. The Sun-Times editorial blamed Topps for having it out for Rose and for a double-standard in which Rose's name was abolished, but other "cheaters," like Barry Bonds, are still mentioned.

That's not a correct conclusion because:

1. Not being able to mention Rose's name is not Topps' call. It's Major League Baseball's.
2. There is no double-standard. Rose is banned by MLB, which granted Topps an exclusive license. Bonds, or anybody else not nicknamed "Shoeless Joe," is not.

However, I still see why this topic is interesting, why people are writing about it still after people wrote about it two weeks ago (or wrote about it a decade ago as Beckett's Chris Olds says -- speaking of "I was here first.").

It's interesting because Topps went through the effort to obliterate Rose's name in the most obvious fashion. Topps could have taken a different tactic, like it possibly did in its 2010 set. 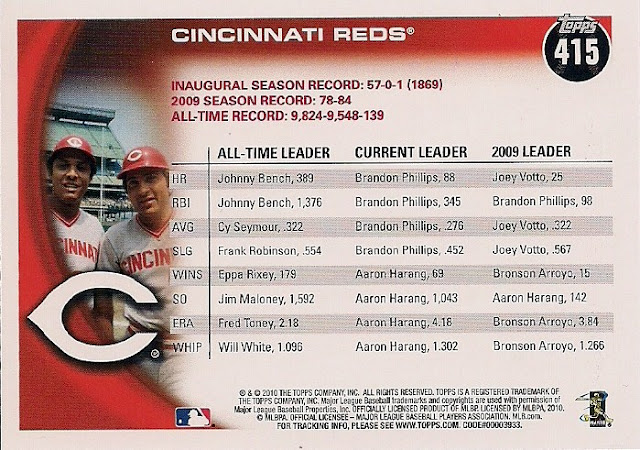 This card of the Reds' all-time leaders conveniently lists only the leaders in Home Runs, RBIs, Average, Slugging Percentage, Wins, Strikeouts, ERA and WHIP. (All of the franchise history cards in the 2010 set list the same stats).

It does not list all-time leaders for at-bats, hits, runs, doubles or walks. If it did, Rose's name would have to be excluded because he is the Reds' all-time leader in all of those categories and MLB's exclusive license with Topps apparently bans Topps from mentioning Rose's name.

But this was not always the case, not even since 1989, when he was first banned from baseball.

How do I know that?

Well, I turned to my baseball cards. I wanted to see if it was possible that Rose's name has not been mentioned on the back of a Topps baseball card since he was banned from baseball in 1989. That didn't seem possible to me.

And it isn't possible: 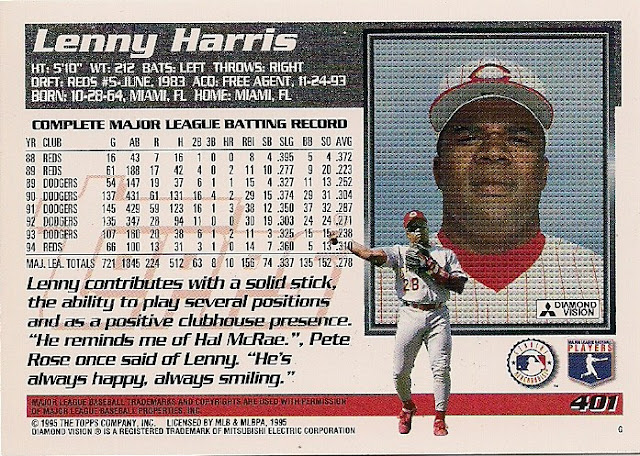 1995 Topps. Rose is mentioned on the back of Lenny Harris' card. 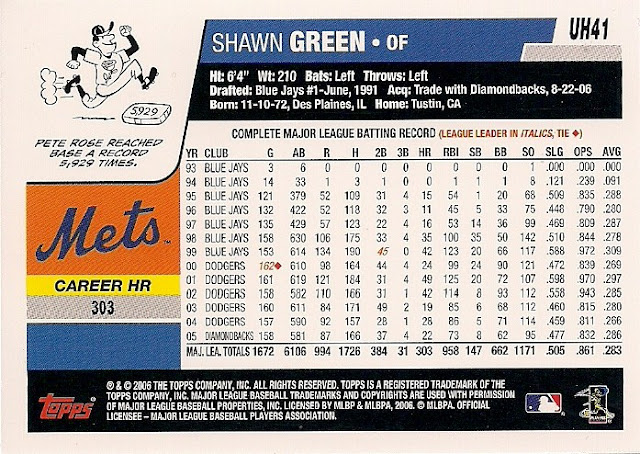 2006 Topps Updates and Highlights. Rose is mentioned on the back of Shawn Green's card.

That seems to indicate to me that this whole "not mentioning Pete Rose never ever" on Topps' cards is a recent development. It must come from the exclusive licensing deal with MLB prior to 2010 cards being issued. I couldn't find any mention of Rose from 2010 to the present (although I ran out of time to look through everything in my collection).

I know that some of the people who report on the hobby, are saying, "we already knew that. We've been saying that already."

This was part of what David Brown from Yahoo! Sports addressed, and he included my scans in his write-up.

It just seems so intentional, so blatant. So mean, really.

It seems like MLB is ruling Topps with a little bit of a heavy hand. I mean talk about being mean -- MLB won't even let Topps write the name "Pete Rose" on its baseball card?

Now, it's possible -- as also addressed on Twitter -- that Topps knows its licensing agreement is up for renewal after this year's set and it wants to be as nice-nice to MLB as possible, so why do anything risky?

All of the people who knew about this topic already are being very pragmatic about everything. Real life and legal contracts and all that -- "But it says RIGHT HERE, he is banned from MLB-licensed products."

It still seems mean. Mean of Major League Baseball. Mean of Topps for mentioning it in that kind of way.

That's why it's still interesting. That's why people are writing about it two weeks later. Because it still seems so mean. Vindictive even.

You can talk all you want about how Rose is an idiot, he knew the rules, he continues to be an idiot, he deserves all of the consequences, etc., etc. I get all that. I agree with all that.

It still seems so mean.

So anyway, that's where I spent all my time today.

But one more little thing and then I'll go away.

When I wanted to figure out whether Rose had been mentioned on the back of baseball cards since 1989, I wondered where I could go quickly to find an answer.

My first thought was the 2006 Topps Update and Highlight set.

Unlike the regular 2006 Topps base set, where the cartoons on the back refer to a specific achievement of the player on the card, the Updates and Highlights set cartoons mention random facts about baseball. Great achievements, baseball rules, interesting firsts, nicknames, etc. Baseball trivia. It's good clean fun.

If any group of cartoons was going to mention Rose, this is the set that would.

So there's a lesson here:

1. All card backs should have cartoons
2. People learn from cartoons
3. Read your card backs
4. You might end up on some big-boy website if you read your cartoons 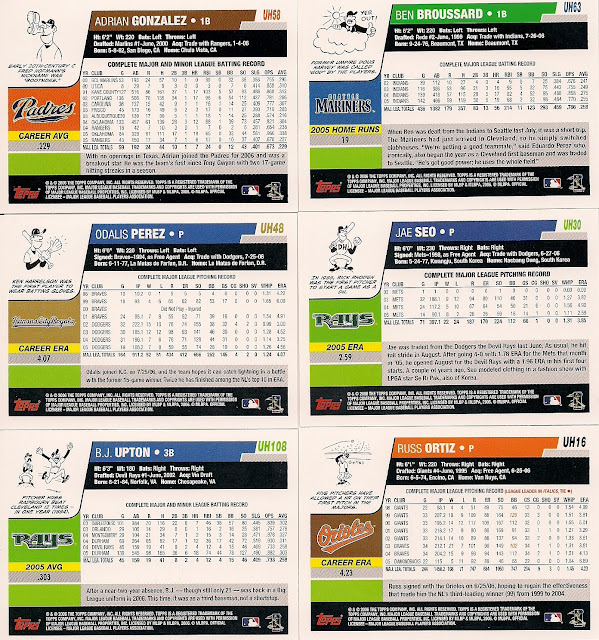 There are some more for you.

It's the cartoons, I'm telling ya.

deal said…
solid posting - honestly I think it has been a fun day on the Tweets, and I have enjoyed hearing all the ops etc. Topps got what they wanted - lots o free talk.
February 13, 2013 at 9:07 PM

Jim from Downingtown said…
I like to rip Topps as much as the next guy, but your observation that the Reds' card doesn't list leaders in at-bats, hits, runs, 2b, 3b, walks, etc doesn't hold water.

Topps historically tracked leaders in 6 categories: Batting Average, RBI, HR, ERA, Wins, and strikeouts. Those six are on the card backs, along with 2 newer apparently "sexy" stats. There isn't room for every category. They covered the top 6, and a few others.

night owl said…
Gee, Jim, how unlike you to play devil's advocate.

I'm not saying it's definitive proof.

Community Gum said…
I wish this was what ran on Yahoo or in the Sun Times.

I certainly understand the argument of "omit every name," and would vote for that option if I were in that meeting (assuming it was brought up).

I guess I can see how you and Yahoo (congrats on the mention, by the way) see it as mean, but I don't.

I'm anti-Rose, but that's not why. I just don't get the feeling that it was a malicious thing. To each their own.

Since none of our blog posts are going to be picked up by the big boys, let's just hope that all this talking about cards will maybe actually get a couple people to think about them and then get back into buying them. Name or no name.
--Jon
February 13, 2013 at 10:24 PM

Ashley said…
Definitely the most thorough and hilarious write-up of this topic today. Nice work.
February 13, 2013 at 10:28 PM

Fuji said…
Great post. How long did it take for you to find those two Topps cards with Rose on the back? You're one dedicated blogger. I guess that's why you set the standard in our blogworld.
February 13, 2013 at 11:15 PM

AdamE said…
I think it has more to do with Rose's exclusive deal with Leaf than it has to do with the Topps exclusive MLB deal.
February 13, 2013 at 11:53 PM

That's entirely possible. I just don't have a handle on all the legal issues. I just want my cards with pretty pictures!

Ryan Cracknell said…
Thanks for being the sanity.

Rose does not have an exclusive deal with Leaf. He was recently in Upper Deck All-Time Greats and Panini Golden Age.
February 14, 2013 at 3:14 AM

defgav said…
Tangentially related, can anyone explain to me why Barry Bonds is missing from some League Leaders Topps cards from the early 00s? I can't remember exact years, but I remember seeing some cards where he'd be #1 on the stat list on the back of the card, but on the front, they'd show pictures of the #2, 3, and 4 guys, no Bonds.
February 14, 2013 at 7:35 PM

night owl said…
During those years, Barry Bonds would not sign a contract with Topps to allow the company to use his likeness.
February 14, 2013 at 7:53 PM