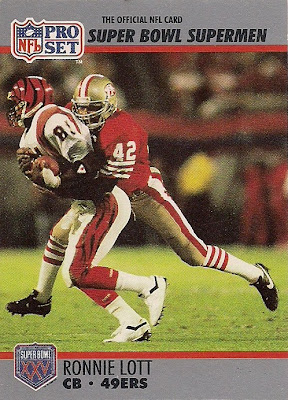 I have spent the last 11 Super Bowls watching the game from work.

It's not as bad as it seems, but it does take away from the ability of the game to linger in my brain. The vast majority of memories I have from Super Bowls occurred before 2001. Since that point, the game has been a jumbled mess of headlines, graphics and "where's my celebration shot?????"

But pinpoint the team with the year? No can do. Ask me the matchups from the last decade and I'll just shout "Patriots!" at you in a clueless panic.

The interesting thing is that the vast majority of the games from the last 11 years have been exciting games. Close margins of victory. Late-drive excitement. Dramatics everywhere. But they don't stick in my mind when I go through 37 years of Super Bowl memories (my first memory is Super Bowl X, the Lynn Swann game).

The games that do stick in my mind?

Well, those would be the ones where the Super Bowl was part of a party, when I was surrounded by friends and food and beverages. The game was a small, yet important part of the festivities that took place on that day.

The best of those?

But the best of the best was Super Bowl XXIII, January 22, 1989. The 49ers beat the Bengals, 20-16. It was a hell of a time in that house in suburban Buffalo. I'll remember it long after all other Super Bowls fade forever.

It also helped that it was a close, exciting game. At the time, the Super Bowl had been plagued by a series of blowouts and fans were starting to wonder if the game was ever going to be close again. People were getting bored. The 49ers and Bengals did their best to get the game back on track.

These days, just about every Super Bowl is exciting. A goal-line stop in the final moments. A spectacular grab with the ball pressed against the receiver's helmet. I watch it all from work, ready to spring into action when a winner is declared. But I can't tell you what happened in last year's game.

So, we're trying something different tonight.

We're having a Super Bowl party at work. Food, drinks, everything you can expect at your stereotypical big-game party (no alcohol, unfortunately).

Yeah, we've done a little bit of this before at work, but never at this level.