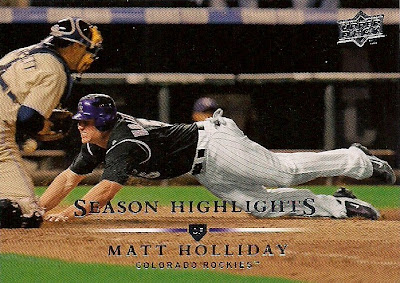 This is the only time that I have felt sorry for the San Diego Padres.

Matt Holliday's consensus failure to touch home plate in the one-game playoff between the Rockies and Padres helped propel the Rockies all the way to the World Series in 2007. Normally, I laugh when misfortune befalls the Padres (and I laugh a lot). But there was no justice in this particular play. And I like seeing justice done. I also like seeing the Rockies lose. So my sympathies, San Diego.

But it didn't occur to me until I received this night card that every team -- not just my beloved Dodgers -- has experienced injustice on the baseball field. For the Padres, it's Holliday not touching home plate. For the Braves, it's Kent Hrbek's wrestling move on Ron Gant in the '91 World Series. For the Cardinals, it's Don Denkinger. For the Orioles, it's Jeffrey Maier. For another team, it's ... umm .. well, I'm sure it's something. I'm just too immersed in the injustices done to the Dodgers to really pay attention.

The Dodgers' worst injustices are easy:

1. Steve Garvey getting called out at home plate by umpire Nestor Chylak in the 6th inning of Game 1 of the World Series in 1977. We all know he was safe.

2. Reggie Jackson sticking out his hip in the baseline, redirecting Bill Russell's throw into foul territory and scoring a run for the Yankees in Game 4 of the 1978 World Series. We all know it was interference.

(Both of these plays featured Thurman Munson, by the way, which is another reason why he'll never get off the shit list).

But because I'm so invested in the Dodgers, what I thought would be interesting is to ask everyone what they think is the greatest injustice done to their team. What was the most offensive way your team was robbed? (And I'm referring specifically to particular plays, so although I feel Marlins' fans pain if they say "Jeffrey Loria," that's not what I'm looking for).

Feel free to leave your comments on this post.

I fully realize there is often an "other side" to these plays -- if the Padres, for example, hadn't collapsed at the end of the 2007 season, Holliday wouldn't have been an issue -- but diehard fans don't see it that way. It's been 35 years since 1978 and I'll still call Jackson a cheater, no matter how poorly the Dodgers managed that particular play.

That's the fun of being a fan.

It gets all mixed up sometimes.

Scott Crawford said…
That play at the plate was pure vigilante justice by the umps over the Milton Bradley incident where one of them got in trouble. Huge bullshit, any way you slice it.
February 24, 2013 at 2:40 PM

Commishbob said…
Munson is on my shit list, too. Just because he seemed like such an unlikable guy.
February 24, 2013 at 2:57 PM

Anonymous said…
I have a couple of thoughts. None of them relate to my team - I can't remember the Reds ever really getting jobbed in my lifetime.

First and foremost is the 1985 World Series. The call at first base is the closest thing to outright costing a team a championship I know of in baseball history.

Cleveland fans always complain that there teams get jobbed, and particularly the Tribe. The 1997 World Series and the strike zone for Livan comes to mind, at least as the one I tend to agree with said Cleveland fans on.
February 24, 2013 at 3:16 PM

Roy-Z said…
Not a play in a game, but the defamation of the Blue Jays in that rubbish "Man in White" article from ESPN still sticks in my craw.
February 24, 2013 at 3:33 PM

Marcus said…
Another Padre injustice was Mark Langston's two strike pitch to Tino Martinez in Game 1 of the '98 Series. It was an obvious strike that should've ended the inning. Instead, it's called a ball, and Tino hits the next pitch for a grand slam. I don't think that it would've changed the outcome of the Series, but it would've been nice to avoid a sweep.

carlsonjok said…
Although I am sure someone more versed in Yankee history would probably come up with at least a dozen others, my thoughts turn immediately to this play.
February 24, 2013 at 8:05 PM

Spiegel83 said…
Not a baseball flashback, but my sports robbery comes from the "Tuck Rule" game when the NFL, Refs and the Patriots colluded to screw the Raiders from a playoff victory. That play still gets aired and I still have no clue how that wasn't a fumble. All of New England has been on my shit list ever since.
February 24, 2013 at 10:31 PM