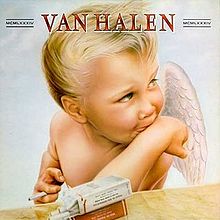 OK, I've decided that this is a "thing." "Match the Song Title" is a "thing" now. It's a series on this blog. I like it. I'm having fun with it. Two of these posts in two weeks means we are officially "an item."

To recap, I find an album, I give you a list of the songs, and then I match a card to each of the song titles. It takes my enjoyment for baseball and music and mashes them up in simple, bite-size, semi-effortless chunks. It's easy, breezy fun.

Last week I went with "El Camino," the latest effort by The Black Keys. Apparently, that was too modern for some people. I'm amused by that because I'm 47. I don't stump people with my youthfulness very often. But really, it's a terrific album. If you like driving rock, blues, all that stuff, you'll like the Black Keys.

Van Halen was THE rock group of my high school years. It's difficult to comprehend now, but at one time Van Halen was about the hardest that you could rock. It was loud, it was youthful, it pissed off your teacher and your bus driver if you blasted your boom box in the back seats.

Picking cards to match the songs in this album was both easy and difficult. The difficult part is something I'm going to have to tackle a lot in this series: a lot of music is about girls but a lot of cards are not about girls. Van Halen is about girls like 90 percent of the time, to the nth sexist degree. So, I did what I could. But I don't know if I succeeded. 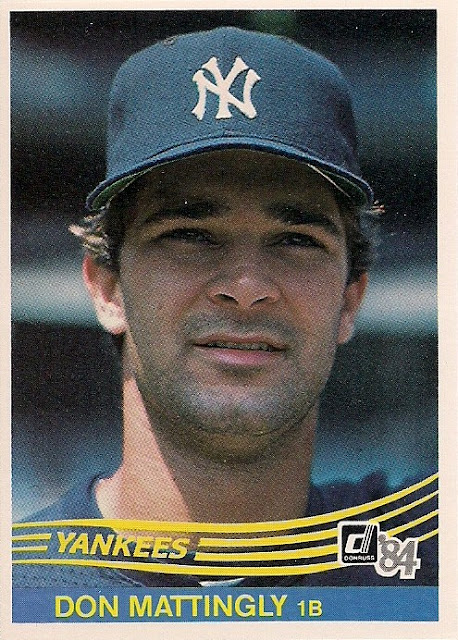 Track 1: 1984. Very easy pick. I think when most collectors think of 1984 and cards, they think of the Don Mattingly rookie card. 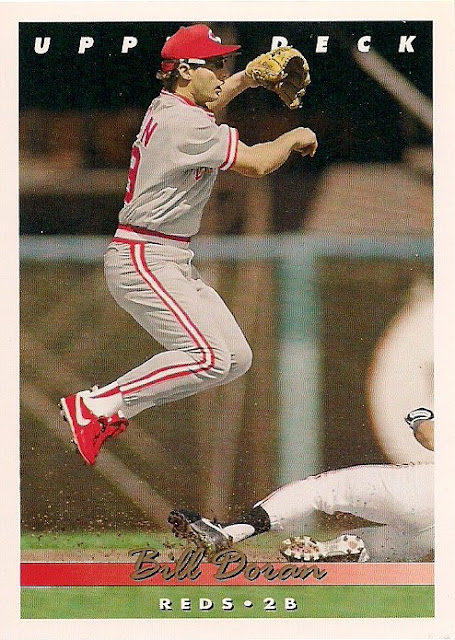 Track 2: Jump. Biggest hit on the album and Van Halen's first No. 1 song. Another easy selection. I could have gone straight to 2012 and found any number of jumpers. But I'd rather pick out a set that I like. 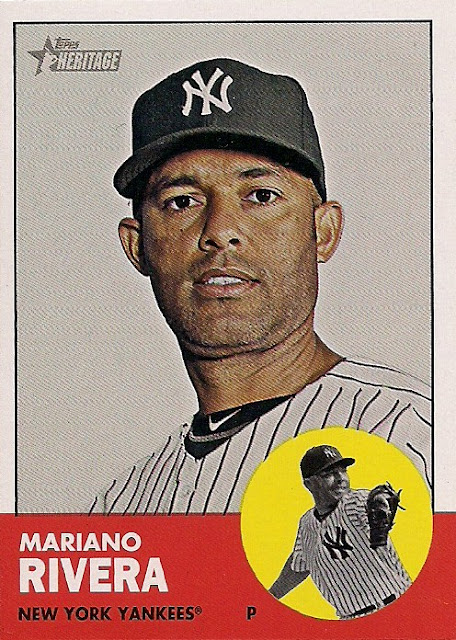 Track 3: Panama. The last of the no-brainer picks. For the longest time, I thought of Rod Carew when the topic of players born in Panama came up. Now, it's Rivera without a doubt. 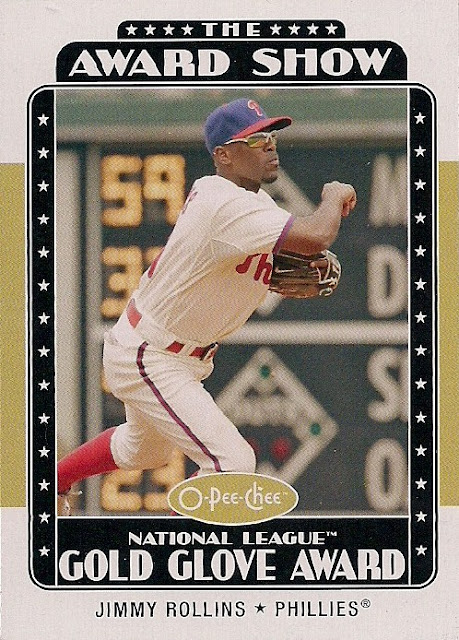 Track 4: Top Jimmy. I wanted to make sure the player on the card was named "Jimmy," not "Jim." But finding a card with a player named Jimmy being recognized with an award was a bonus.

By the way, have you noticed that players named "Jimmy" are almost never pitchers? The only one I can think of is Jimmy Key. 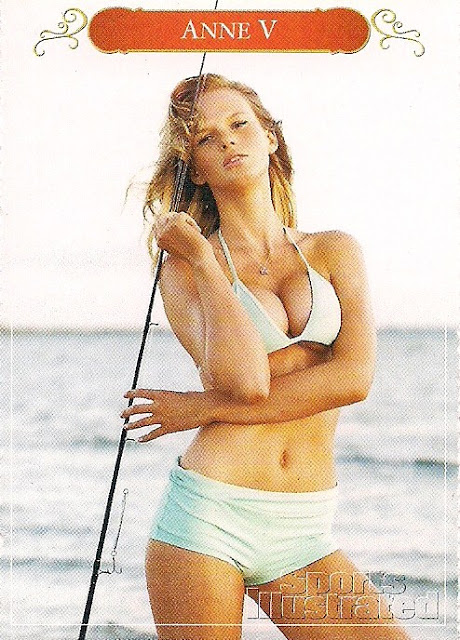 Track 5: Drop Dead Legs. OK, bring on the girls. The trouble with featuring swimsuit models on cards is cards are only 3 1/2 inches deep in most cases. The legs get cut off.

But that is what the card back is for:

Track 6: Hot For Teacher. This card is not in my collection. Would I like to have it? Sure, why not? However, I try to keep these posts to cards that I have. 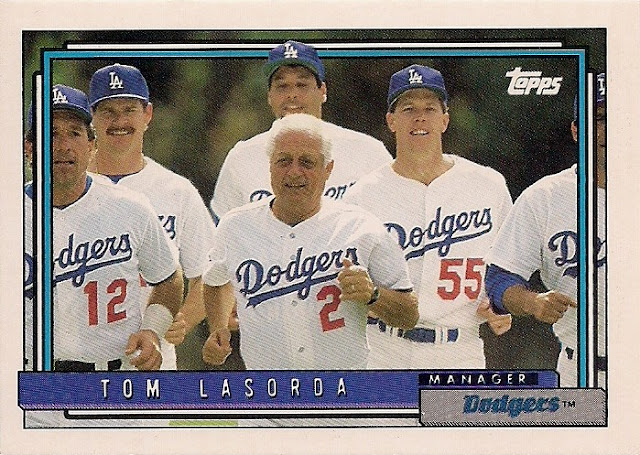 Imagine Tommy as the teacher and his players as the guys "hot" for him.

See why I posted the Benchwarmer card? 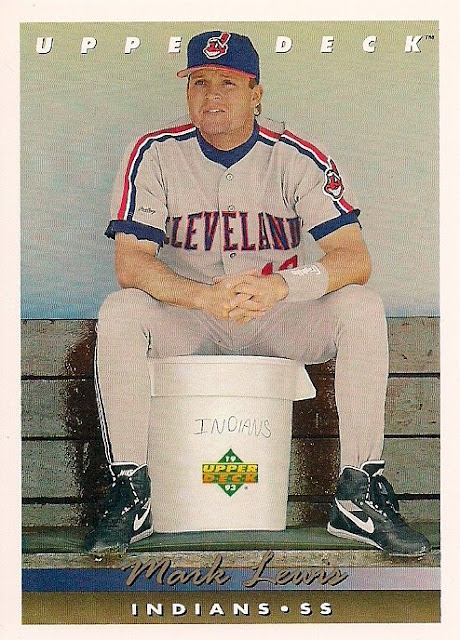 Track 7: I'll Wait. Baseball is a waiting game. I could have gone in any number of directions here. Guys sitting in the bullpen. A batter calling time at home plate. A third base coach putting up the stop sign. But Mark Lewis looking expectantly out on the field here captures "I'll Wait" as good as anything else. 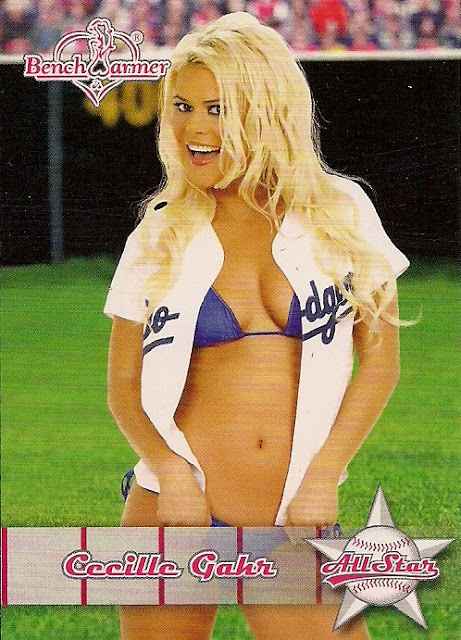 Track 8: Girl Gone Bad. Back to the girlies. This card was supplied to me by the always appreciated Max. You'll see more cards from him later. But I wanted to show Cecille Gahr first. She was a good girl once. But now she's gone bad. I like that for some reason. 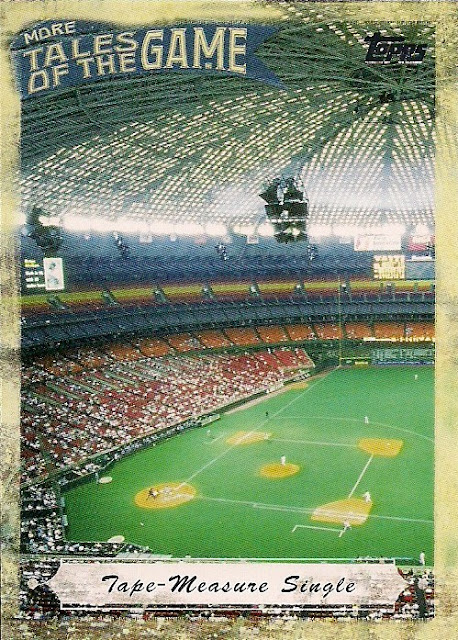 Track 9: House Of Pain. Back in the days of the Houston Oilers, the Astrodome was known as the "House of Pain." I don't know if it was that way with the Astros -- their crowds always seemed rather sedate. Of course, House Of Pain is also known for this.


And that is where the needle comes off the record.

There will be a lot more '80s albums to come. And some from a lot of other decades. And I won't limit it to rock either. You're going to see everything.

Yup, this a thing now. I hope you're prepared.

arpsmith said…
My favorite band of all time (I actually like both the Roth and Hagar versions pretty equally) and one of my favorite albums. Nice job on the matching of the songs as well. The Benchwarmers cards is infinitely better that Tommy in so many ways!
January 24, 2013 at 8:04 PM

Stealing Home said…
Good call on making it a "thing".

I totally dig Van Halen even now. No matter the current volume on your player, when a Van Halen song comes on, it automatically goes up another click or two.
January 24, 2013 at 8:32 PM

Brandon said…
It has been a long time since I burst out in laughter as loud as I did with the Lasorda card and comment.
Great album. Great idea for a recurring theme.
January 24, 2013 at 9:05 PM


music, like cards, are very objective.
When I hear Black Keys, I do not hear any driving rock, and no blues either.... but visions of hippies and VW's spring to mind.

CaptKirk42 said…
Nice concept. I would think that most albums would bring challenges. For instance Aerosmith's "Love in an Elevator" from the "Pump" album would prove to be a challenge. There are no elevator's in baseball.
January 25, 2013 at 1:09 AM

Jason T. Carter said…
Just when I think you've reached the top, you continue climbing. I love this series, and am looking forward to further posts. The first two albums you picked are splendid...Black Keys are one of my current favorites, and Van Halen one of my all-time favorites. Keep up the awesome work.

Swing And A Pop-up said…
Great post. I wore the grooves off of that album in high school. The intro to "Hot For Teacher" was a great way to get the attention of the people on the floor below you. Bring on the 80's albums!
January 25, 2013 at 1:19 PM

The Prowling Cat said…
As with the first edition you did a great job. So DJ will you be doing requests later in the year?
January 26, 2013 at 12:27 AM