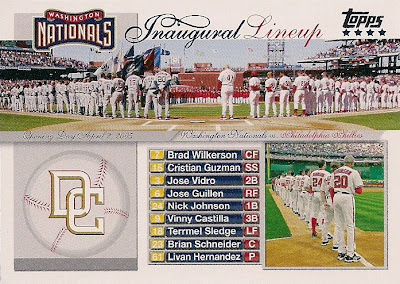 Today is Inauguration Day (observed) in the United States. So why not focus on Washington's representative in Major League Baseball?

I suppose if I wanted to truly represent the uniform history of this franchise, I would include the clothing choices of the Nationals' precursor, the Montreal Expos. But I'm not going to do that, partly because I want to recognize only current teams, and partly because once this series is over, I'm considering recognizing bygone teams like the Expos.

So, when the Expos became the Nationals -- and no, I'm not really happy about it either -- the uniform colors remained the same, basically. Perhaps a little less emphasis on blue, and a little more emphasis on red, which works historically with the old Washington Senators' focus on red (circa 1961-71).

Now, whenever I think of the Nationals, I think of red. Stephen Strasburg. Red. Bryce Harper. Red. I even periodically see red. Although that's only when the Nationals are playing the Dodgers. Or when I pull the fourth version of a Harper card in a base set.

Topps reflects this in the color choices it has made for the Nationals so far in their young history. Topps started out mixing red and blue, and has since gone over to red, mostly.

Here is the breakdown: 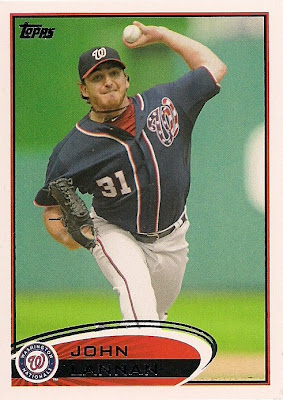 deal said…
The Topps Nats Inaugural Lineup Card has an incorrect date - the game was played on 4/4/05 not 4/2.

Always bothered me - The Phungo Banner photo was taken the same date from a different angle. It is interesting to compare the two pix.