January 11, 2013
(Today is a day I have eyed with trepidation for six months. I could exit the day exhilarated and victorious or terribly demoralized. I better have lots of cardboard around me in either case. Time for Cardboard Appreciation. This is the 169th in a series): 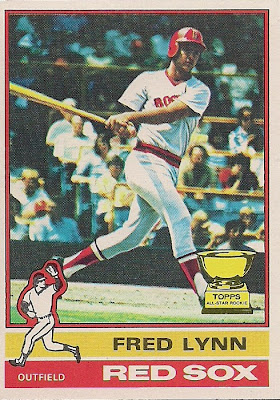 I've mentioned several times that the only thing I really collect is baseball cards. I don't collect jerseys or periodicals or caps.

I have collected other things in the past, and I've mentioned that, too. Matchbox cars, stamps, stuffed animals, coins, etc., etc. After puberty hit, I cut down on my peripheral collecting habits to zero in on cards. But still the collecting addiction extended its reach into other things. And when I wrote that post that was when I realized that even when I "wasn't collecting" I was always collecting. I just didn't think of it as collecting.

I call that "subconscious collecting" or "subliminal collecting."

There was a period, between 1995-2004, in which I bought maybe 10 packs of cards total. I just wasn't interested in collecting cards then. But that doesn't mean I didn't collect, even if I didn't think I collected.

The most obvious non-collection collection were my compact discs. From the point I received my first CD player in 1988, I accumulated so many CDs that when we moved into our house, I basically papered three walls of the living room with CDs. A lot of them sit there still, waiting to be used again.

I stacked each issue of Sports Illustrated proudly in my apartment. Remember the hologram Michael Jordan Sportsman of the Year issue? I remember being so fascinated with that magazine as it sat on top of all of my SI's on my black plastic table in the corner of the kitchen. Little did I know that they were putting holograms on baseball cards. I had no idea.

The fact is, I simply cannot not collect. I am certain that if I gave up my entire baseball card collection, sold everything, and swore off ever entering a card aisle again that next week I would take up another collecting habit. Who knows what it would be, but I'm sure it would be something that I "wasn't collecting."

Because I'd be collecting it subconsciously.

In fact, I do "subconscious collecting" within my baseball card habit, too. I subliminally collect certain cards without even knowing it. 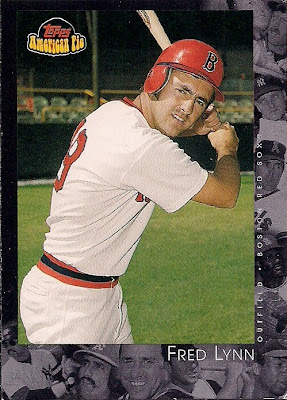 One of those non-collections is Fred Lynn cards.

When we were kids, my brother's favorite player was Fred Lynn. He was fresh off a fantastic rookie season in 1975 and his 1976 Topps card was absolutely fascinating to us all. Ever since that point I have been interested in Fred Lynn Red Sox cards (don't give me those Angels or Orioles or Tigers Lynn cards. I don't even subconsciously collect those).

When I receive a Red Sox Fred Lynn card, like this American Pie one that I got a few months ago, I look at it -- consciously -- and say, "Hmmm, Freddie, I don't really collect Freddie." But then I squirrel it away and it never comes out when I'm looking for Red Sox cards to swap in a trade. Freddie is not for sale, says subconscious Night Owl.

My guess is I do this as a barely noticeable tribute to both my youth and my brother. It doesn't take a psychiatrist to uncover that. But I never really thought of it in that way until I was looking through cards the other day and the '76 Lynn showed up again.

And now that I know it, I guess I'll keep collecting Red Sox Freddies.

(Anybody else do any subconscious collecting?)

I never really used to think twice about picking up anything of his, but now I find myself coming home with more and more of his cards from each show.

There were at least a dozen among my "finds" from the last one. I'm still not quite sure how that happened.

I doubt I could ever completely stop collecting, either. I'd pick up another hobby if my cardboard went by the wayside.

Sometimes I say that collecting is in our DNA. While I originally meant it as a joke, I'm starting to think there's some truth to it.
January 11, 2013 at 3:09 AM

I think my Rookie Cup collection originally started out as subconscious collecting. I still need that Fred Lynn for said collection BTW, but I'll try and pry one away from someone else.
My upcoming "One of" collection has been a bit subconscious as well. I don't think I have ever collected a player like that though.
January 11, 2013 at 5:03 AM

arpsmith said…
I did the same thing with CDs as you and also with books. I have a few authors who I always buy their books and have to have every one in hardback (maybe that one is a little more conscious).

I am a closet Lynn fan as well. I have picked up a couple of his cards in his USC college uni and have one of his rookies. I don't officially collect him but I won't be trading those away.
January 11, 2013 at 9:48 AM

Will Clark, as a tribute to my cousin who is longer with us (and because he's a New Orleans native who graduated from my high school), and Chuck Finley who went to high school with my Aunt in Cutoff, La. and who she calls "Chuck" in the cutest South Louisiana accent you ever heard.

Commishbob said…
I've found myself subconsciously collecting vintage Yankee pitchers. Not front line guys like Whitey Ford but Rollie Sheldon, Johnny Kucks, Duke Maas. Guys like that. I know it has something to do with my days of accompanying my Dad to Yankee games when I was young.

I didn't even realize it until I started to trade or give away my '59 set dupes. I found I wasn't parting with the Tom Studivant, Zack Monroe or Bob Turley cards that I had upgraded.

And I have an actual Art Ditmar collection.

runfore!kelloggs baseball cards said…
That's a great card of Fred Lynn. And a trophy card as well. I opened a lot of packs in 1976 and it was great to pull a few of that one.

Anonymous said…
If this makes any sense, I think I'm subconsciously chasing after sets, while consciously purchasing singles. It seems like it would be opposite of that dynamic, from my perspective, but it isn't. So, while I pick up those cards that are both appealing and fill a hole in my collection, I also save and prepare for more luxurious additions. But, all the while, going on underground in the closets of my mind, I'm chasing after all kinds of sets as the completest in me, as much as I can't admit it, won't rest until they're obtained, put in penny sleeves and put safely on the shelf in new 800 count cardboard boxes. And man, the whole bit of it is just awesome.
January 13, 2013 at 10:14 PM