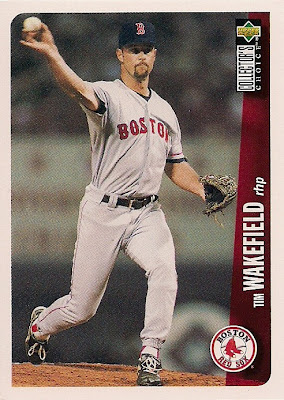 Continuing with the theme of "subconscious collecting," or what someone so crassly described as "hoarding,"  are the players I accumulate who have the most tenuous of connections to me.

One of those players is Tim Wakefield.

Wakefield rose to fame as a knuckleball pitcher for the Red Sox, and previous to that for the Pirates. Many people also know that Wakefield started out as a hitter. He was a first baseman before realizing he had a better shot at the majors if he took the mound with his baffling new pitch.

The embarrassingly suspect connection to me is that Wakefield played his first season of professional baseball -- as a first baseman -- for the New York-Penn League Class A Watertown Pirates, who played their home games a few traffic lights from where I now live.

I didn't even live in Watertown when he played in the minors. I was still in school. And, although my newspaper often interviewed former Watertown Pirates and Indians who moved on to bigger things, I don't believe we ever talked to Wakefield. I know I didn't.

Yet, when Wakefield was doing his thing for the Red Sox, extending his career year after year with that pitch that seems to emerge directly out of the Fountain of Youth, I would burst with provincial pride. "Wakefield used to play in Watertown," I'd say periodically, pausing for effect. "As a first baseman."

I would root for Wakefield, of course, and the Red Sox. And I hold Aaron Boone in special contempt, over and above the usual death stares I aim at Yankees, for the home run he hit off of Wakefield. I also find myself holding onto Wakefield cards like this one. I don't seek out his cards. But when I stumble across one in my collection, I glow with pride all over again.

It's ridiculous really. I'm not from Watertown. I have no family connection to the place. I never saw Wakefield play in person ever. Neither the Pirates nor the Red Sox -- although teams I always enjoy -- are my favorite team. The whole thing is pointless.

Yet, this is what baseball does. It draws us in, in whatever fashion possible. And we attach ourselves to the sport in tangible and intangible ways.

And we -- or at least I -- collect cards of some players without even realizing it.

Could be worse I suppose.

I could be collecting "21 Jump Street" cards. Richard Grieco is from Watertown.

Roy-Z said…
I consider myself pretty knowledgeable on NY minor league teams, but even I didn't know about the Watertown Pirates.
January 13, 2013 at 4:39 PM

AdamE said…
I'm going to go out on a limb and say that Wakefield is your best subconscious collection. (I have to admit though that Lynn is pretty good too)
January 13, 2013 at 9:00 PM