It's time to put this box of A&G out of its mis-er-ee.

With no hope of victory and virtually no hope of another hit, I am officially in Detroit Lions mode -- play out the string and hope for a No. 1 draft choice next year.

Last year I finished with 268 points. That would be damn fine this year, but I think it's a little more difficult to score this time around. I am at 150.6 with three packs to go, and there is no way I am breaking 200 -- which seems to be the indicator of top 5 box in Gint-a-Cuffs II.

So let's see what assortment of bones, stars and champeeens I can pull from Packs 22-24: 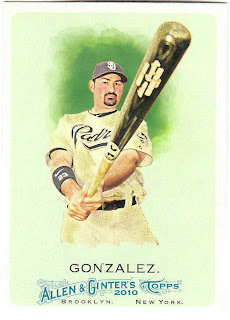 3. #170 - Adrian Gonzalez (2 points, favorite player list). Nice card. Team playing over its head. But at least they're still not bastards like the Giants. 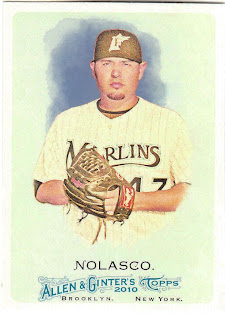 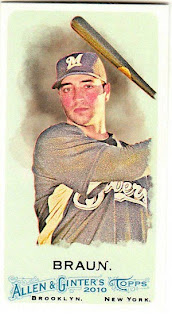 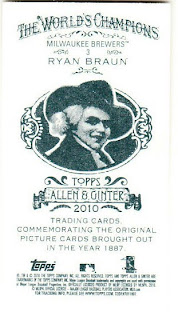 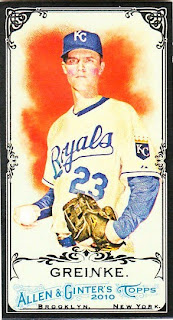 8. #262 - Zack Greinke (3 points, black border mini). LOOK AT THIS! My missing mini materialized as an "extra mini" in Pack 22! Oh, I take back all that bad stuff I said about you Topps. Can we be friends again? I guess I have no choice, huh? You're all I've got. 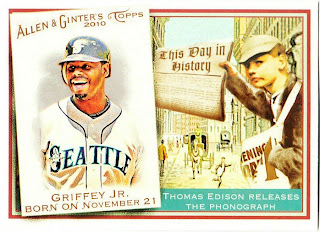 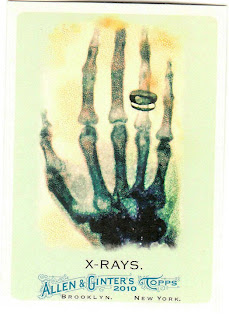 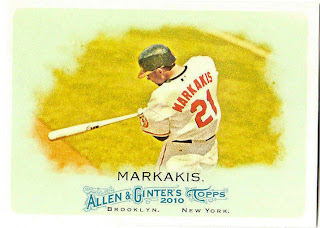 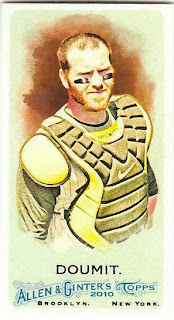 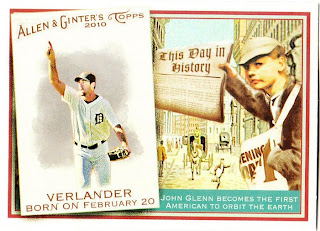 Making a Lance Armstrong-like charge: valiant and admirable, yet pathetic and doomed at the same time. 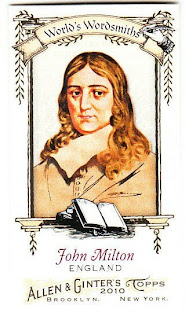 7. #WGWS8 - John Milton (4 points, Wordsmith's mini). Holy smokes, for a moment there, I thought I was going to have my first scoreless pack AND go an entire box without a wordsmith's card. 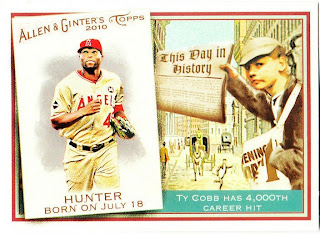 And that does it.

Like last year, the last pack fizzled and like last year I went just about the whole second half of the box without pulling a Dodger.

I'm sure that this is about as average a box as there is. I got exactly what I was promised but not a fraction more.

Well, I've got to finish off the set, of course. And find a binder and pages for it.

I'm fairly certain that, unlike last year, I won't be buying a second box. I will probably go the blaster/trade route like I did in 2008. It was more successful and more fun. The blasters seem to have a lot more promise this time, too.

I've got to find out exactly what I have and compile a want list. And, of course, I've already got some trade offers that I need to handle.

Anyone care to wager on when I finish off the set?

Exactly 20 days after the Dodgers win the World Series.

The Notorious B.U.D. said…
Not a terrible box--that's probably around where I'll finish. I pulled a Kershaw mini black border and it yours if you don't already have one.

Goose Joak said…
I have been following Gint-A-Cuffs and have felt that this year's set was pretty yawnstipating. But that Greinke card is a force to be reckoned with. Holy schnieke.
July 21, 2010 at 11:19 PM

Cardsplitter said…
I agree with the blasters. The boxes were fun, but a blaster seems to give you one of each mini set, give or take, plus a black border or A&G back and a regular mini or two. I had as much fun ripping the two blasters I bought as the two boxes, even though I knew I already had most of the cards in the blasters.
July 22, 2010 at 9:41 PM