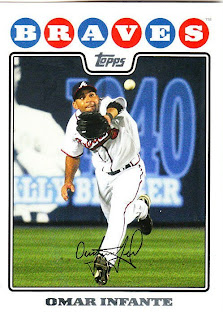 OK, so what do I think about Omar Infante making the National League All-Star roster?

I know what my Out for Justice side thinks. He thinks it sucks. He thinks role players don't belong in an All-Star Game. He thinks Joey Votto got pillaged. He thinks it's a good thing that home plate umpire Angel Campos doesn't look anything like Charlie Manuel or he might have been picking up bits of himself all over the infield after he ejected Votto on Sunday.

My Out for Justice side thinks that there are at least 56 players who are more worthy of playing in the All-Star Game than Omar Infante. Rafael Furcal, who is absolutely burn-your-skin-off scalding right now, would be a perfect choice.

But here's the reason why Infante is on the All-Star roster. He's a damn fine utility man.

You didn't know Utility Man was a designated position in the All-Star Game did you? You were still trying to wrap your mind around "designated hitter" and "closer" and "set-up man." I totally feel you. I've disliked the specialization of baseball for a good 15, 20 years now.

This is the next step down the specialization black hole -- picking players for the All-Star Game who are pretty good at playing everywhere, but not good enough to play one specific position. Ooooh, Mr. Out for Justice really hates the sound of that. He fears that some day no player will be able to play for more than an inning and each team's roster will be 89 players large. It will be like football with baseball players running on and off the field after every pitch (*shudder*).

But here's the other side:

There are teams in the majors, teams that have won a World Series, that DIDN'T EXIST the last time the National League won an All-Star Game.

Putting Infante on the team may look ridiculous and appear to be an insult to players with better stats, but times are desperate. You know that old quote about the definition of insanity being the act of doing the same thing over and over again and expecting the same result? At least the N.L. appears to be doing something different.

It's time to get off of the concepts of who is "worthy" and who is "most deserving." That's not helping the National League. It hasn't helped for years. It's time to start thinking about this concept: winning the stupid game.

Will Infante be the key to a victory?

I dunno. It sounds pretty goofy.

But what else ya got?