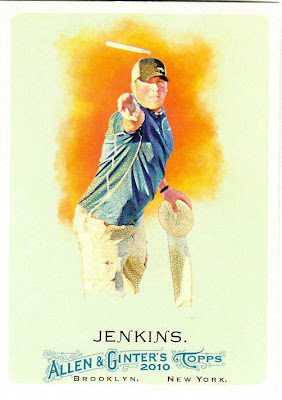 I bought a blaster of 2010 Allen & Ginter Sunday. If you remember, the point in which a set ceases to be "new" is when I find a blaster of the stuff in my neighborhood.

So that means all we're showing on Gint-a-Cuffs now are cards everyone has seen a zillion times before: "Oh, geez, there's that guy surrounded by flames again. When is someone going to show something interesting?"

I hear ya. But I'm in the middle of a contest here. It's a contest I won't win, but that never stopped the Cubs from finishing a season did it?

So I am continuing on, but first I'll show you the highlights of the blaster. It wasn't too bad for the first blaster, even if I pulled a few short-print doubles, which annoys me to no end. 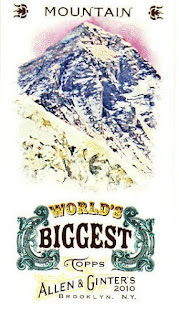 There was one of those World's Biggest minis, which apparently are retail only. I like this one. You can't get much bigger than a mountain or Mount Everest. So I think I've got the King of Big here. Awesome. 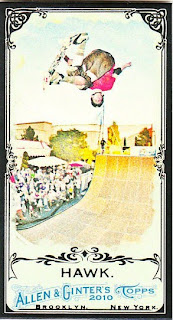 I'm no X Games fan or a follower of skateboarding, but cool is cool and a black bordered card of Tony Hawk is cool. I'd display a hand gesture that meant "awesome" or "rock on," but I have no idea what that is anymore. 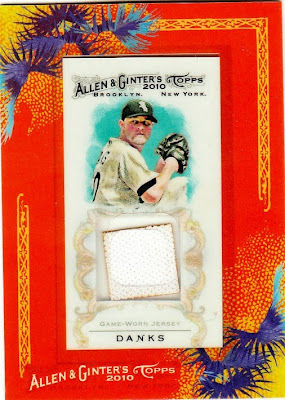 Yay! A relic in my first A&G blaster of the year! After hitting blaster relics fairly regularly in 2008, I pulled an oh-for in 2009 and was royally agitated. Glad to be back.

A&G White Sox relics come my way quite frequently. In fact, I'm building a decent stack of cards for Steve at White Sox Cards that I'll have to send as a care package for the White Sox blowing that game against the Twins on Sunday, which was very similar to the way the Dodgers blew their game against the Cardinals. ... OK, I don't want to talk about that anymore. 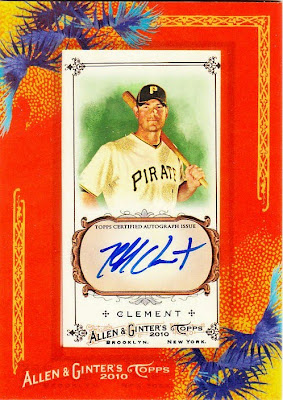 Yes, that is correct. I just received an autograph card of Pittsburgh Pirate who is hitting .189 in 45 games this year.

I think that might be the worst autograph pull in the whole set.

OK, let me revise that a little. Among baseball players on the auto checklist, this is definitely a bottom-five pull. There are probably several non-ballplayers that I'd be more disgusted with than Mr. Clement here, only because I don't recognize half the names I am reading (never a good sign).

Besides, Clement has a speaking part in the most aired commercial of the entire baseball season:

He's the guy who says: "How about a pizza party for all of Pittsburgh?" Or at least we're led to believe he says that.

OK. I'm keeping the relic now. It will get an honored spot right next to my A&G Fred Lewis bat relic from last year. 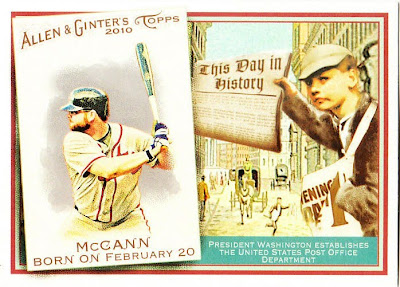 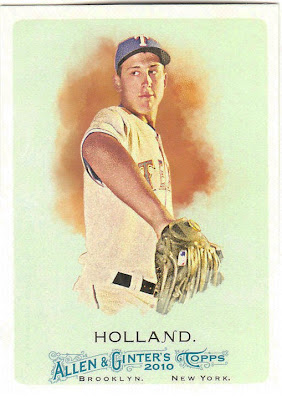 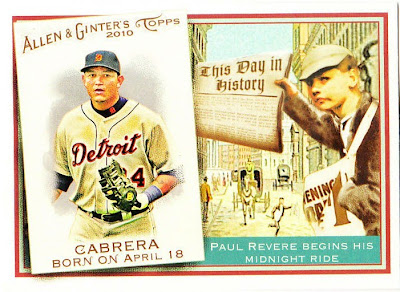 I'VE BEEN SHORTED A MINI!!!!! BASTARDS!! I TAKE BACK EVERYTHING I SAID NICE ABOUT TOPPS AND THIS BOX! WHAT KIND OF EVIL SCHEME ARE YOU PEOPLE RUNNING HERE????? 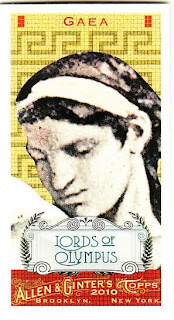 7. #LO10 - Gaea (3 points, Lords of Olympus insert). The back says Gaea is "something of a mythological Mother Nature." OK, but I don't think Mother Nature is real either. But I know what they're saying. 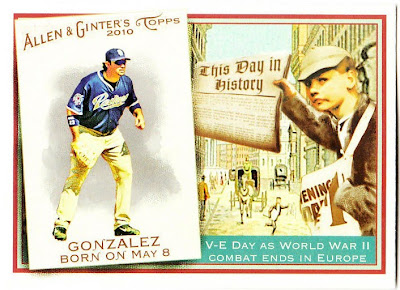 Excuse me while I mope about the missing mini for the next 18 hours.

Community Gum said…
Thank you for solving that part of the Pepsi commercial mystery for me! Now, I just need to figure out who that Cub player is supposed to be. He doesn't look like anyone on the team. My first thought was Joey Gaithwright.

The Notorious B.U.D. said…
Nice blaster! Sorry about the Clement auto--he stunk for the Mariners too (as does my A & G box).

darkship said…
If you come by another Clement I'd fine some stuff for trade as well... He's an Iowa kid and It's kinda fun finding cards of them for my collection
July 19, 2010 at 3:12 AM

night owl said…
OK, Matt F. will be getting the Clement as he spoke up first.

FanOfReds will be getting most of my other A&G hits/needed inserts as I have a Kershaw to pay for.

Anonymous said…
Hello Greg! Email is still givin me problems so just lettin you know here, I sent the cards today, let me know when you get em! THANKS!
July 19, 2010 at 2:50 PM