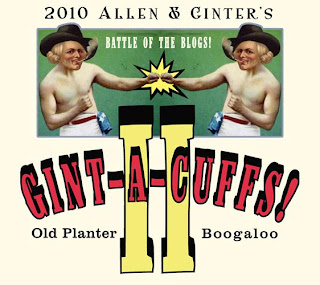 It's a little unsettling that I'm the first person to kick off the Gint-a-Cuffs II competition. What if I screw up? What if I confuse the newcomers to the festivities? What if I pull a Strasburg mini and nobody cares about anything I post after that?

Well, the third item doesn't matter because it ain't going to happen. Actually, I'm sick of all the Strasburg cardboard talk. It's gotten stupid now. Everyone, please, stop being stupid.

So, let's focus instead on the rest of the set, which appears to have more flaws than past A&G offerings but still is more interesting than just about anything available. In fact, I kind of hate to bring Gint-a-Cuffs into the mix, because if last year is any indication, it may eventually kill everything that's good and righteous about the set. But in the early going it's a fun exercise.

If you don't know the official Gint-a-Cuffs rules, take a gander.

Still, onward I plunge as I now present to you the first official pack in the Gint-a-Cuffs II Old Planter Boogaloo. 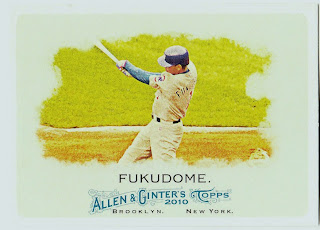 This card would have produced some points last year. Lonestarr, come back! 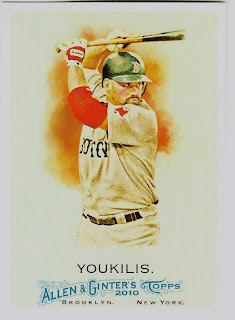 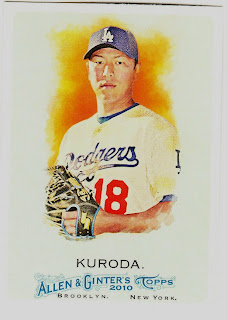 #336 - Hiroki Kuroda: 3 points (+1 for favorite team, +2 for short print). Weeeeee! There are two short-print Dodgers in the set. The other is Jonathan Broxton. I'm so very happy to get one out of the way in my first pack. 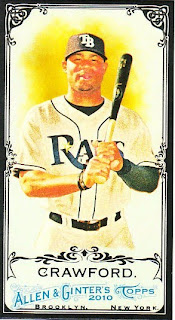 #67 - Carl Crawford mini: 6 points (+3 for being mini of favorite player of Collective Troll's and +3 for being black-bordered mini). I think Troll might be seeing this card eventually. 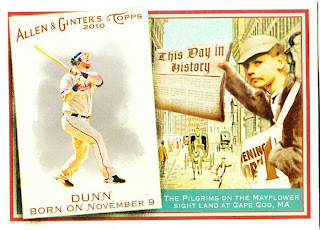 #TDH13 - Adam Dunn, This Day in History: 1 point for being favorite player of Todd Uncommon. I knew pulling all those Dunn cards would finally pay off.

I'm having difficulty with the scans of the A&G cards. I can't get the blue backgrounds to show without tweaking the contrast of every card. I'll have to tinker. Maybe by pack 24 I can get it figured out.

Anyway, that's the pack, but with the cabinet box loader that I pulled (Brooklyn Bridge), that's another 8 points to the total score. So this is what I have so far:

Not bad. If every pack is like that I may have a shot.

Cardsplitter said…
I don't know man, I kind of beat you, if only by declaring I was going to lose.

Collective Troll said…
Funny you thought of me with that CC card... I bought a pack of SP Legendary cuts and pulled a card that made me think of you... I am mailing group break bounty on Tuesday so the junk wax truck will be pulling up to your house again...
July 2, 2010 at 2:48 AM