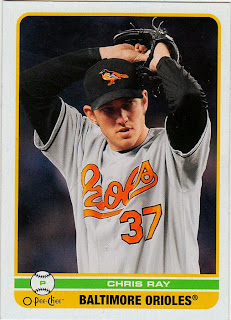 I fear that my rant over the number of studio shots in Upper Deck O-Pee-Chee overshadowed my interest in the set. Even though I spelled out in the post what I like about it, I did go a little over the top on what I see as a negative.

That doesn't mean I take back what I said. The sheer number of portrait cards featured seems like 1992 Studio staged a coup on the set. It's a real detraction. The inserts and short-prints aren't helpful either, but since I'm not collecting the entire set it doesn't bother me much.

But I was at the store today and stopped by the card aisle (it's hard not to with the new alignment of our Wal-Mart -- you walk in the doors and the minuscule card selection is immediately to your left). I instantly snagged two "Big Value" packs of OPC. It really is the only thing that is being offered right now -- aside from Topps base -- that grabs my interest.

And I was curious why that was. I tried to pinpoint the reason further than what I had listed before. Earlier, I said what I liked about the set was the thicker cardboard, the bright colors, the team photos and some of the interesting OUTDOOR photography.

But when I thought about it even more, I came up with the one major reason why I like the set.

Really. Thick, gray cardboard makes all the difference. It is the reason why I keep buying the cards. The tactile wins out over the visual. Who knew?

All the while, I am looking at the backs of cards and all I see is stacks and stacks of gray cardboard. Great stuff. It makes you want to take a whiff of your cards. (Don't play cool with me. You've done it).

So that's what it comes down to -- paper products. Of course, you do need a little more than that. The old-school colored fronts certainly help. But for me, the foundation really is the cardboard.

So that's the upside of OPC, and now I've totally forgotten all about the night card I'm featuring here. It's Baltimore's Chris Ray from the OPC set. Ray didn't pitch a single inning for any major league team in 2008. So I have no idea why he's in this set, and who knows how old that photo is. But I'm not going to go off on another negative spiel.

For now, it's all about the cardboard. Mmmmmm, cardboard.

MMayes said…
I got my first and only OPC pack at Target yesterday. I'm kind of ambivalent about them. However, in the $1.59 pack I got a coupon for $2.00 off any UD blaster box purchased at Target.

night owl said…
No, there are coupons in OPC packs bought at Target.

Kevin said…
Chris was the O's closer in 2006-07 and wasn't half-bad. Of course, Tommy John surgery shut him down last year as you said. I suspect he's in the set because he made the team out of Spring Training this year. He's been terrible though, and spent time at AAA and now looks like he's headed back to the DL.