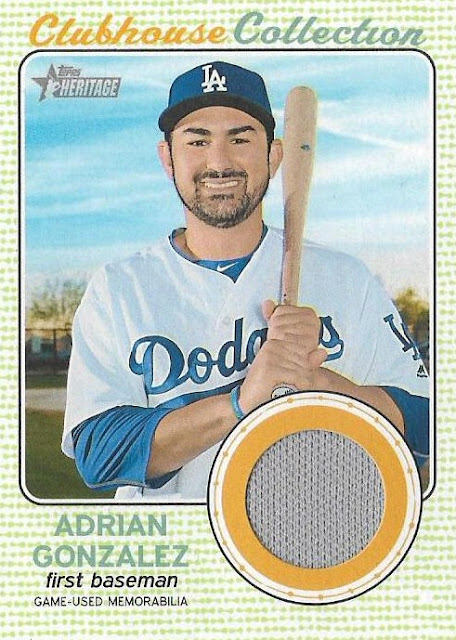 If you were blogging around 2008-09, you know about a blog called "Things Done To Cards". It's still going, although it's updated maybe a couple times a year.

It's one of those collective blogs in which several writers contribute articles. I contributed a couple a long time ago, I remember I once wrote about how in sixth grade me and and a friend would cut up the 1977 Topps four-player rookie prospect cards to create "mini cards".

That's what "Things Done To Cards" was all about -- doing things to cards, whether it's a company encasing a scrap of cloth inside a card or an amateur card artist doodling on an unsuspecting player.

Recently, a collecting reader, Joe, who has sent me all kinds of nifty stuff over the years, delivered a random assortment of cards, some that he had saved for me and others he had picked up randomly at card shows and such. A few of the cards had things done to them, although I didn't catch on right away.

Several of the cards were vintage in nature and I began to admire how slick they looked -- wow, these are in great condition, I thought.

Then it dawned on me: 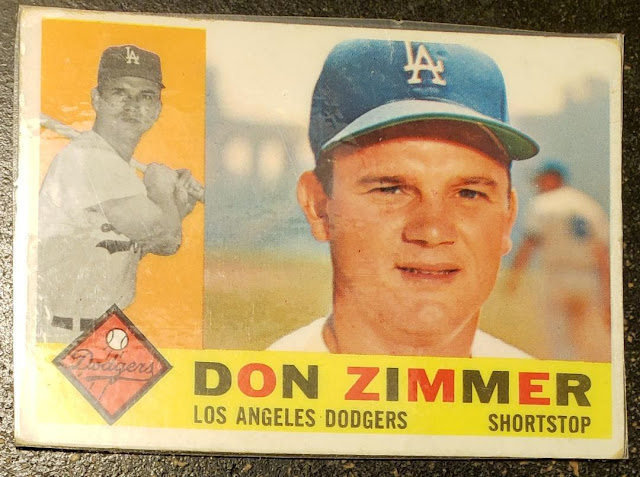 The cards had been laminated!!! 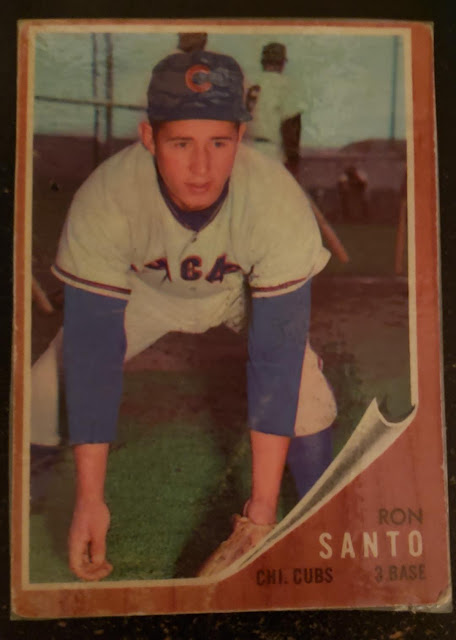 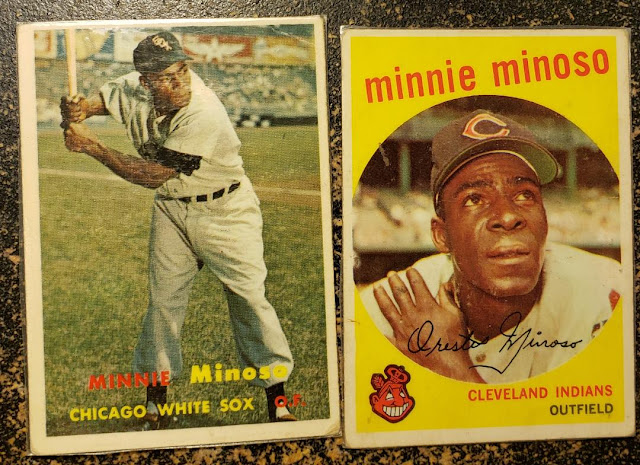 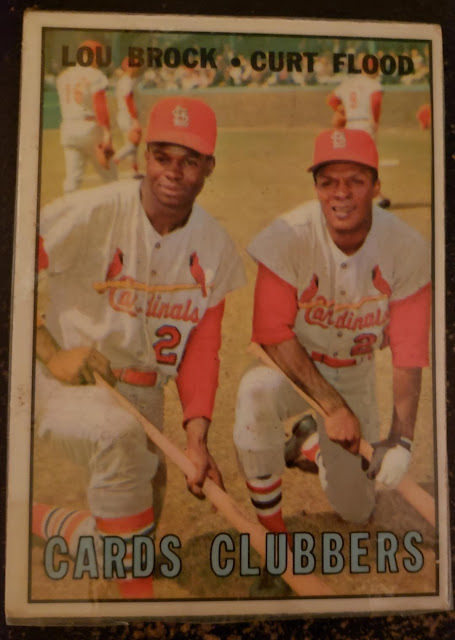 I was equally horrified and fascinated. 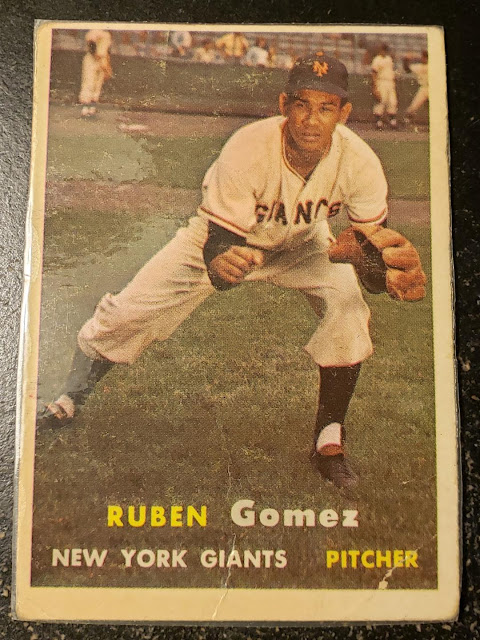 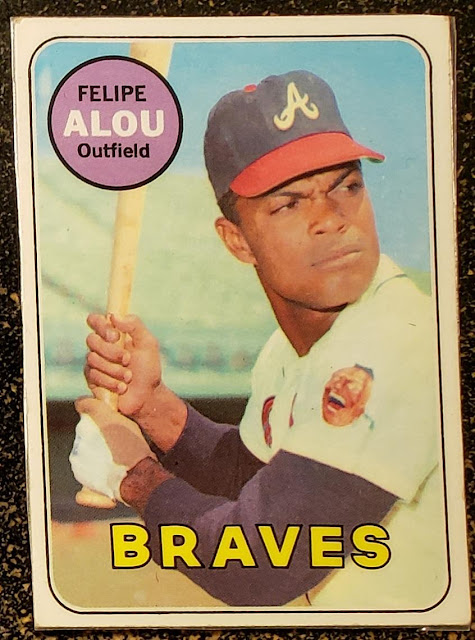 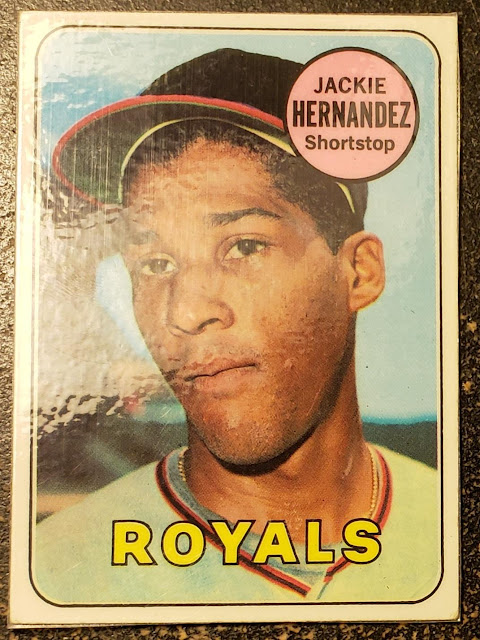 The unnatural shine. The indestructible composition of the cards. Maybe it was just a really tight-fitting penny sleeve, I wondered, still in a state of denial.

I pulled at a card in hopes that the penny sleeve would peel away. 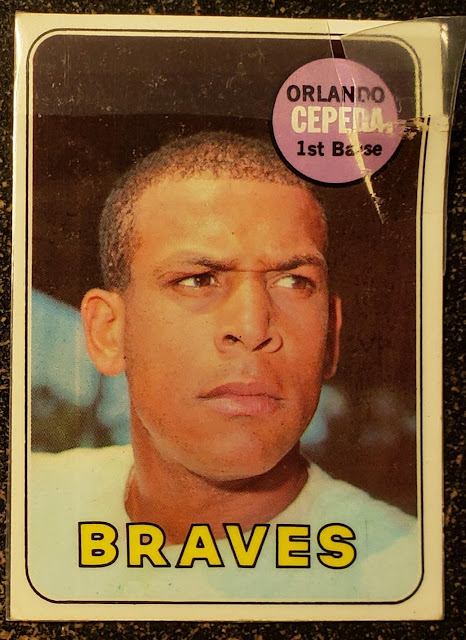 I shouldn't be too surprised, I guess. I've already told the story about how as a teenager I once took a bunch of duplicate 1979 and 1980 Topps cards and laminated them to a generic binder to give it the hobby-themed look. Somewhere on that long disposed binder is an Ozzie Smith rookie frozen in plastic forever.

Joe said he found the laminated cards in a card show discount box and grabbed them. I don't blame him. I can't resist a dime box Minnie Minoso, even if YOU SHOULD NEVER LAMINATE A BASEBALL CARD. 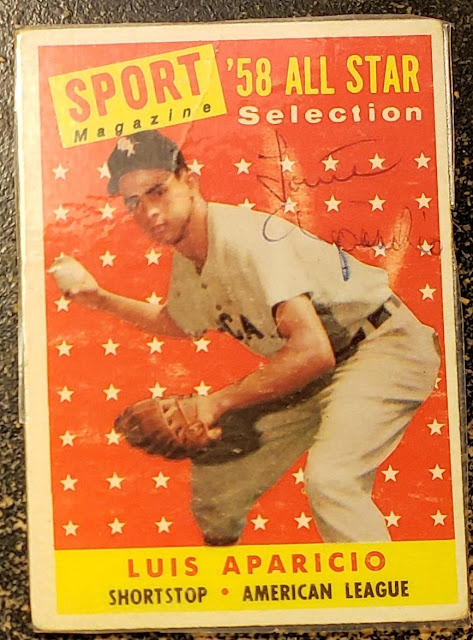 Here is a laminated 1958 Topps All-Star Luis Aparicio in which somebody apparently tried to sign for Aparicio. That is NOT Luis Aparicio's signature. 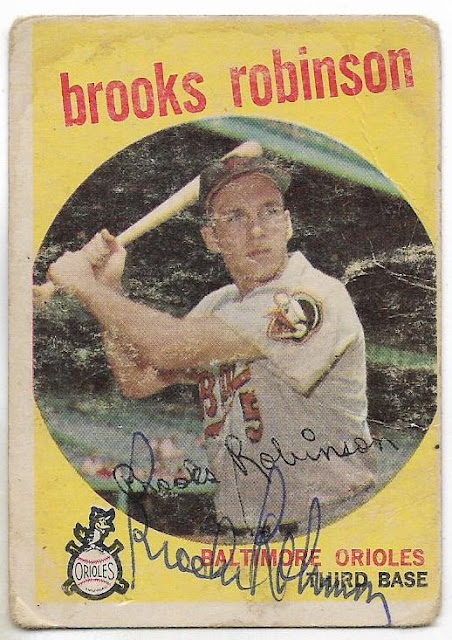 However, this is not laminated, just beat to crap, and appears to be a genuine signature of Brooks Robinson, making it the poorest-conditioned card that I have ever seen signed.

No way you can laminate that sucker. Just keep it out of the light and hope it doesn't disintegrate.

That's an example of the vintage that Joe sent that was not plastered in sticky plastic. 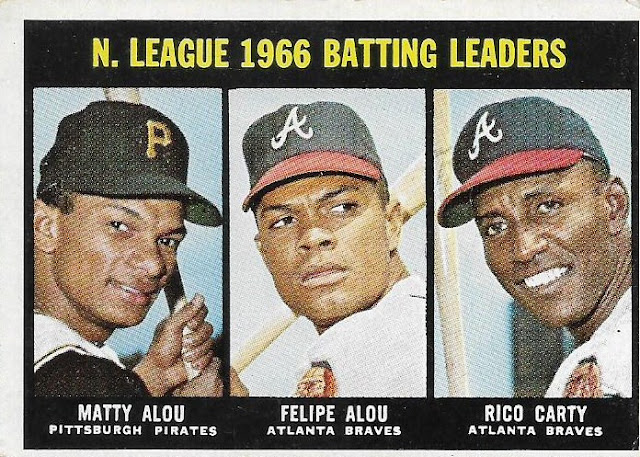 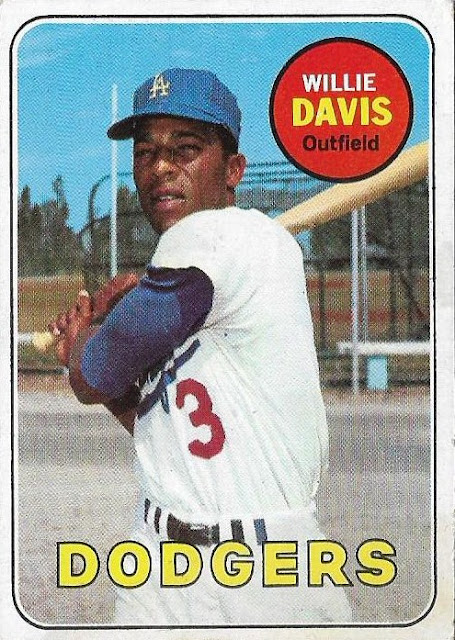 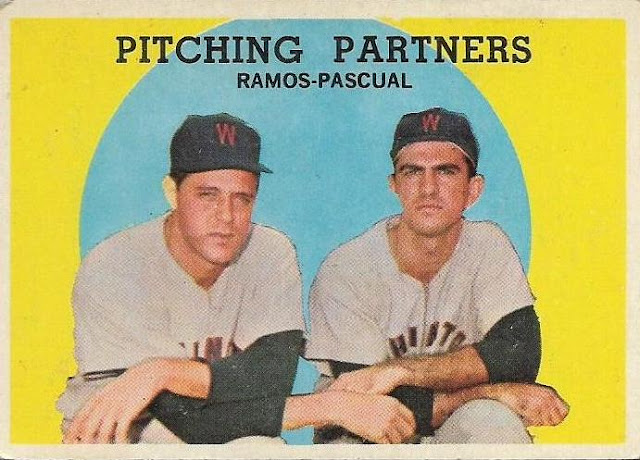 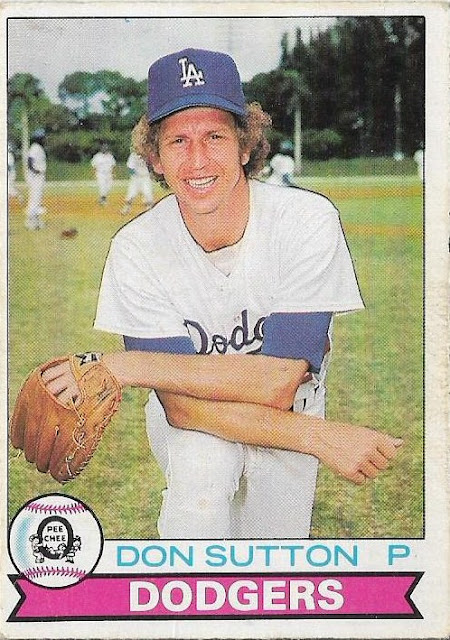 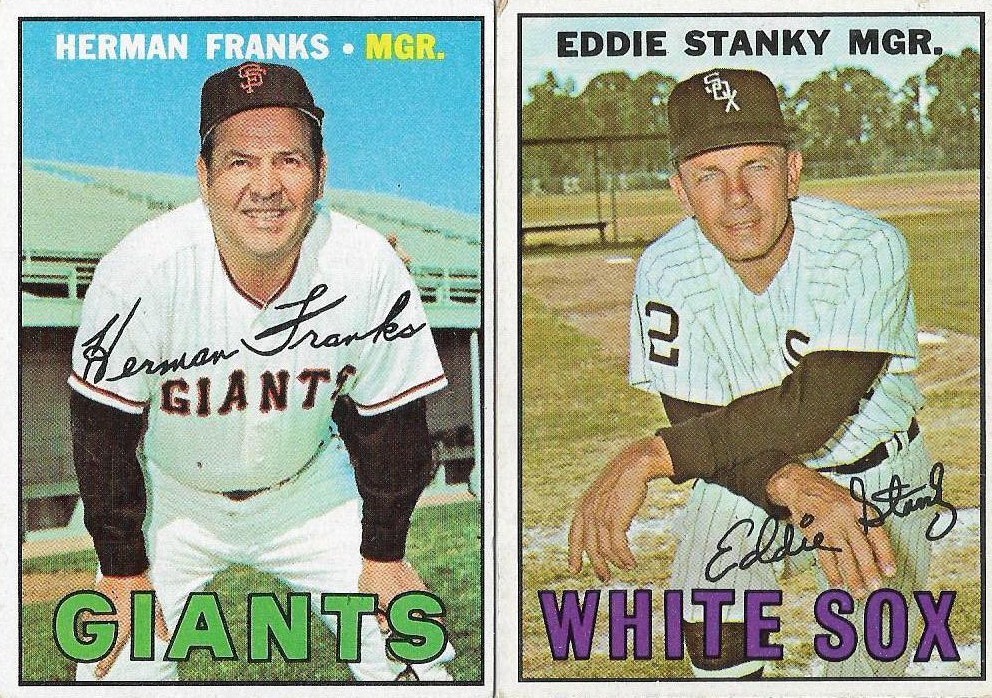 Here are just a few more highlights. Some are needs, some are upgrades. I really appreciate that O-Pee-Chee Sutton from 1979. 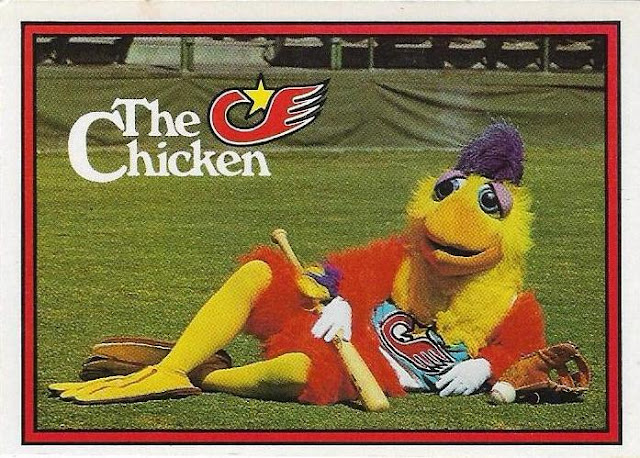 The Chicken! From 1982 Donruss! I now have all the Chicken cards from the early '80s Donruss sets. 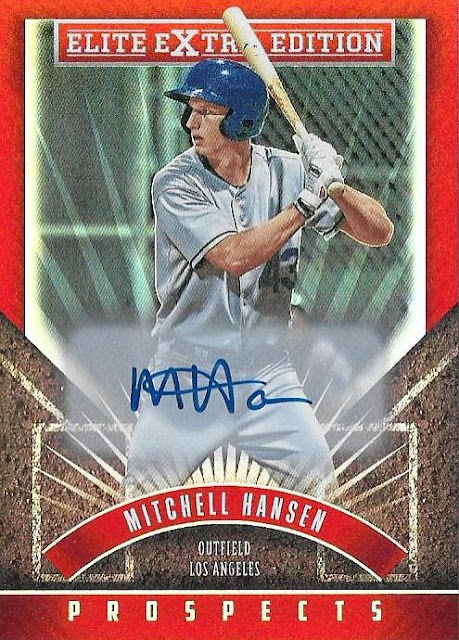 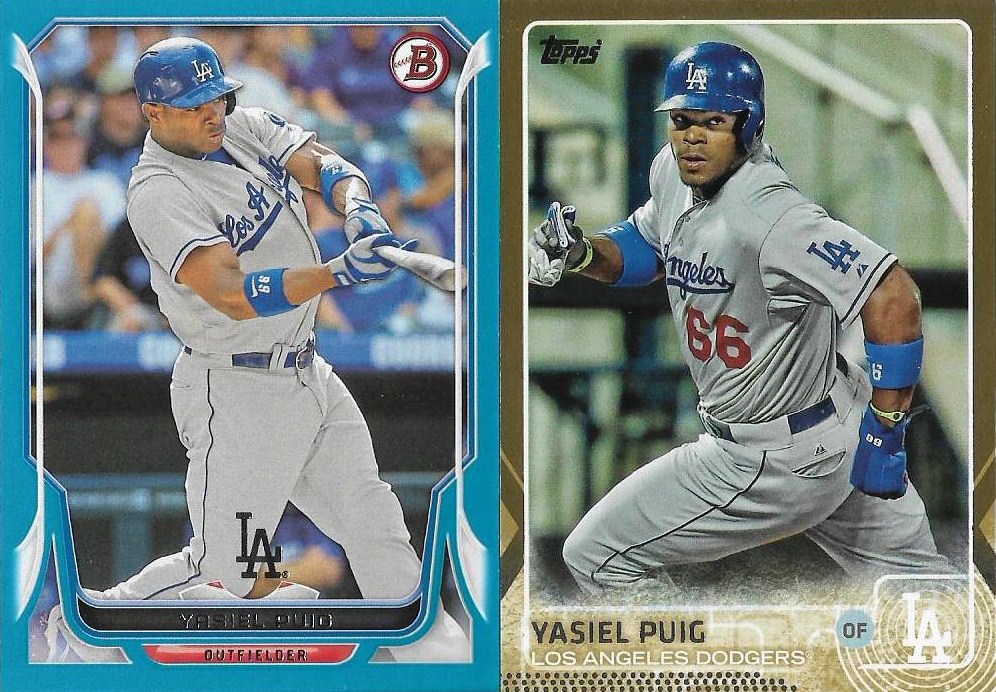 Joe also sent some key Dodgers needs. Well, I wouldn't say a signed card of a guy who never made it past Class A is a key need, but I'm sure somebody out there was suckered into buying a box of 2015 Panini Elite Extra. 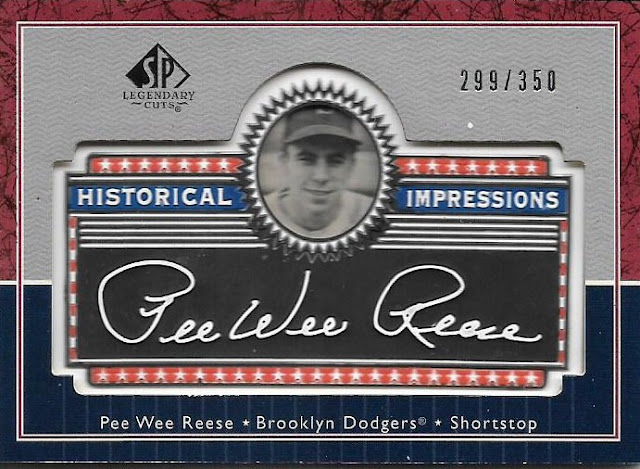 Still, my favorite cards from what Joe sent me are two cards that you could put in the "Things Done To Cards" category: 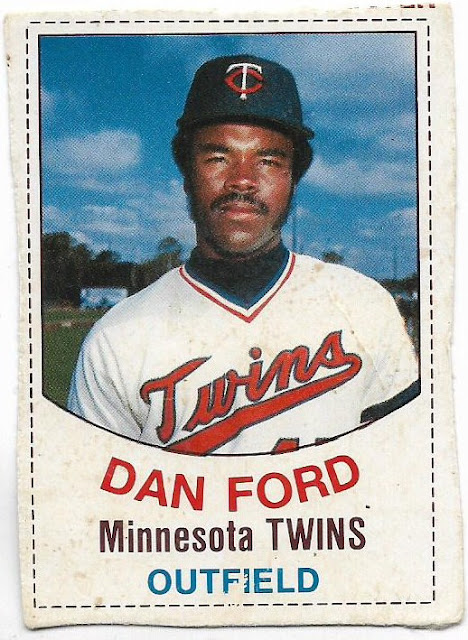 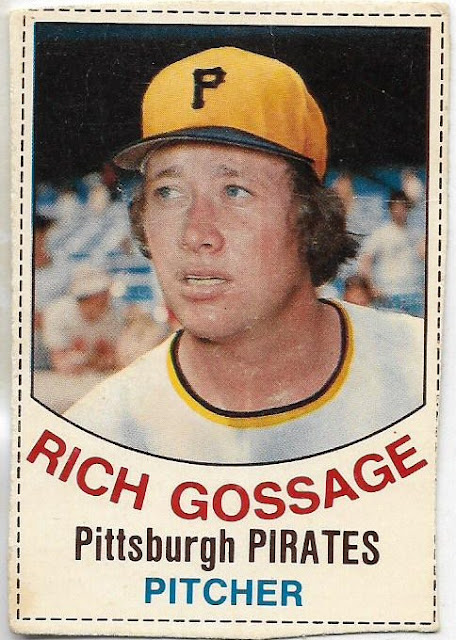 It's two 1977 Hostess cards that no doubt sat under the weight of a greasy Twinkie and then were cut haphazardly by a 9-year-old goofed up on sugar. I might take out my own scissors and do something to that Disco Dan Ford card to make it look a bit more respectable.

It's interesting to me what's "cool" and "not cool" when it comes to tinkering with cards. You can cut them -- sometimes, but you can't glue them in plastic. You can write on them, but make sure the writing is legit.

Actually, you can do anything you want to cards if it's your collection, even laminate them. Glue them to the ceiling for all I care. It's your right.

Just don't try to explain it to anyone.

Bo said…
Wow those are some great cards. One of the unexpected pleasures since I got into collecting vintage are the different things done to the cards. For example I have several copies of Tim McCarver's '73 card, but the keeper for me is the one with a sticker of a foot on the back.
August 28, 2020 at 7:41 PM

Mike the History Teacher said…
Somewhere in my collection I have a couple of random 60s cards where someone wrote the player's new team in ballpoint pen. Not uncommon -- but this person had taken the time to erase the old team name before writing on the white erasure spot. I have to give that person an A for effort.
August 28, 2020 at 8:25 PM

Old Cards said…
Even though they are laminated, those vintage cards look nice. Great post.As a kid, I cut up my 1964 Tony Oliva rookie card and make a full sized card using a magazine picture. Looks better than you think from the front,but the back says Dick Stigman.
August 28, 2020 at 10:55 PM

If I had duplicate rookie stars cards, I would cut them in half and put the one player that was still on the team in his rightful spot (position-wise) in the rubber-banded pack. I would include the other half of the card (there was always a rookie who was either traded or sent down) with his new team, or toss it aside until he was back in the majors.

Nick said…
I swear I've had a post idea sitting in my draft folder forever about things done to some of the cards I own. I'm mainly fascinated by some of the stuff that's been written on cards by the previous owner (or owners). Never knew there was a whole blog about that kind of thing!

Can't say I've seen laminated cards before -- perhaps the missing link between the era of shoeboxes vs. the era of penny sleeves!
August 29, 2020 at 2:16 AM

Commishbob said…
Seeing some of those beeee-utiful vintage cards laminated is, well, rather disturbing.
August 29, 2020 at 9:56 AM

Fuji said…
I remember playing around with Scotch tape (the 80's shiny clear stuff, not the Magic matte tape) and trying to create a protective barrier on a 1982 Donruss Rickey Henderson card. Had that card in a box for years, but it's long gone now. Might need to order a roll on Amazon and play around with some cards before I drop them off at Goodwill.
August 29, 2020 at 10:13 AM

Jongudmund said…
The Chicken card is great. Have you done a post of Chicken cards? (Are we allowed to make requests?)

Johnnys Trading Spot said…
There is no telling what we'll all find as we collect those precious pieces of cardboard.
August 29, 2020 at 12:53 PM

Matt said…
A part of me is genuinely curious: if you laminated a card and sent it in for grading, how much of a grade drop would it get? Would it automatically grade poor?
August 29, 2020 at 1:51 PM

gregory said…
Orlando Cepeda looks puzzled and upset with the person who laminated his 1969 Topps card.
August 30, 2020 at 8:18 AM