August 02, 2020
(Greetings on National Ice Cream Sandwich Day. Do yourself a favor, and buy a few ice cream sandwiches for the freezer. Better than going to the ice cream stand and getting in a yelling match over face masks -- yes, that really happened where I live. It's time for Cardboard Appreciation. This is the 294th in a series): 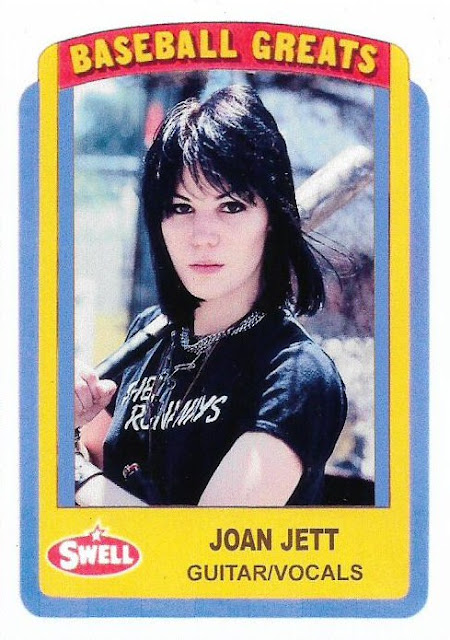 Gavin of Baseball Card Breakdown knows how to push my buttons.

In a bid to drum up a few trades, he offered a couple of custom cards of rock n' roll Hall of Fame legend Joan Jett. Well, he didn't have to ask me twice!

Jett's is part of my teenage history. "I Love Rock n' Roll" first hit radio stations when I was a junior in high school and I went right out and bought the album by her and the Blackhearts. A year later, I bought her follow-up album, which wasn't nearly as popular, but no less rocking.

Jett is a lifelong baseball fan and has rooted for the Baltimore Orioles her whole life, which makes her an idea candidate for a custom baseball card!

Sure, Jett appeared in Topps first-pitch insert series a couple of years ago, but it's always better to get the woman with a bat in her hand.

One of the best aspects of well-done custom cards like this one is it allows you to appreciate the set on which it's based a little more. Sometimes, as in this case, you don't even realize how nice that set is until you see the custom card. 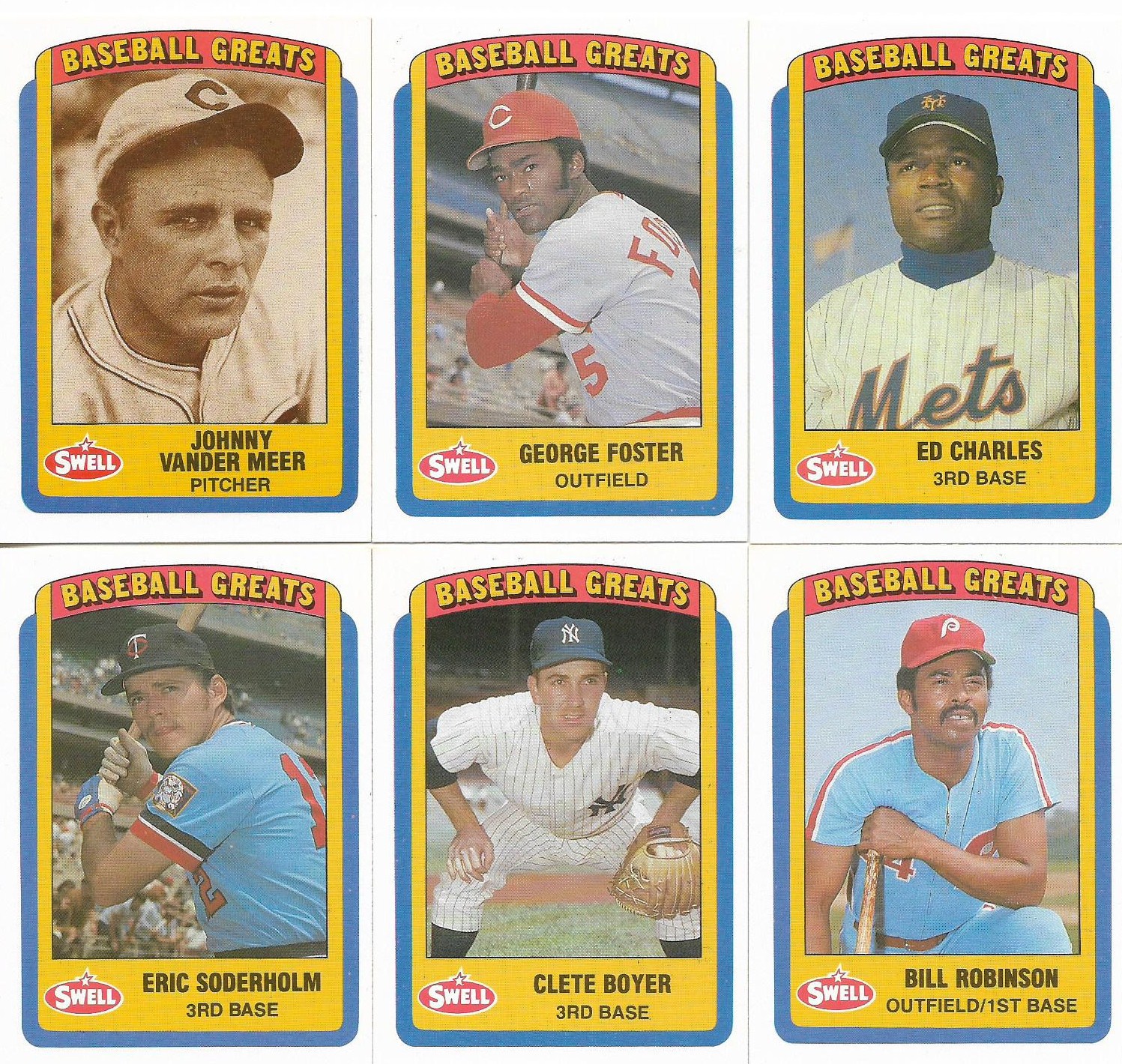 Sure, Swell was nothing but a food-issue set from 1989-91, promoting Swell chewing gum, but it's one of the best-designed oddball sets of its time.

Swell's cards all three years featured nothing but retired players -- it had an MLB license but not a Players Association license -- but its selection was outstanding. Johnny Vander Meer and Eric Soderholm? Bill Robinson? Yup, Joan Jett belongs on this design. These are all legends, even if some fans don't know their names. 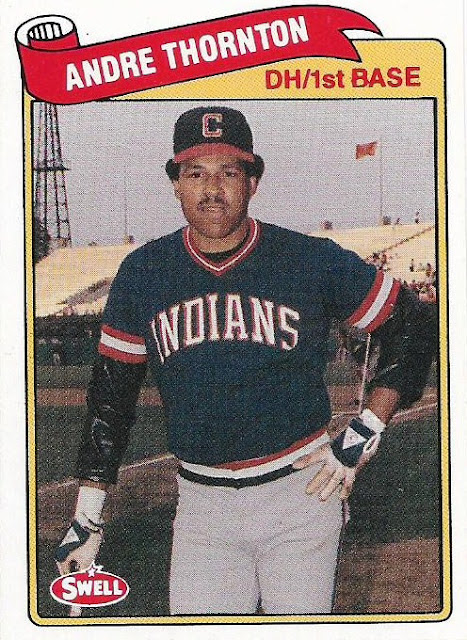 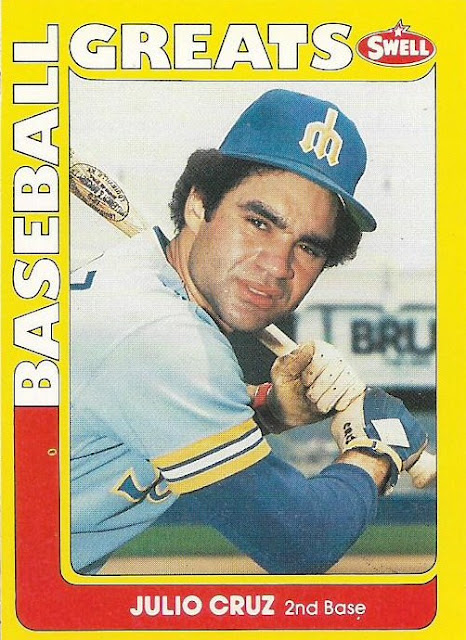 Swell's designs from 1989 and 1991 are terrific, too. They simply blow away some of the other oddball designs that appeared during this time. Pacific, the only oddball set that matched Swell's checklist, couldn't come close to matching Swell's designs. 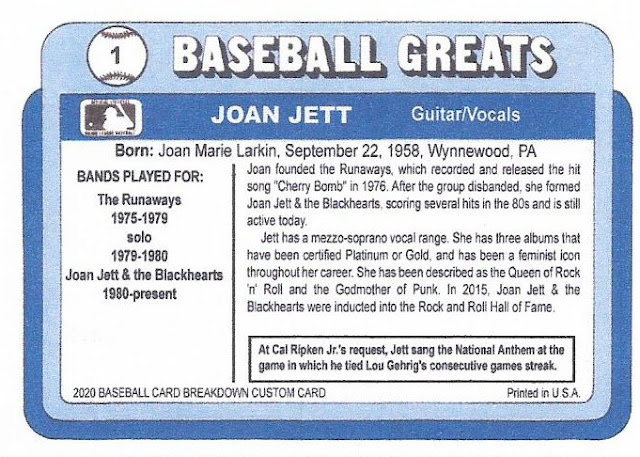 Here is the well-researched back for the Jett custom. I learned stuff from this! 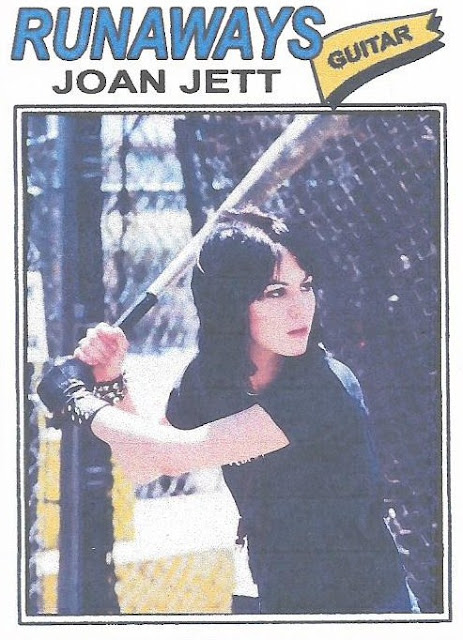 Gavin also sent another baseball-playing Joan Jett card, this time using the 1977 Topps design and focusing on Jett's original band, the Runaways. I actually sent Gavin some '77 Topps in exchange for this card!

The Runaways have received quite a bit of retro praise in the last decade or so, but they were fairly unknown in the U.S. during their playing days in the late 1970s. Branded a punk band at the time, they received radio play only overseas, especially in Japan. Their now well-known song "Cherry Bomb" I didn't hear until the 1990s. 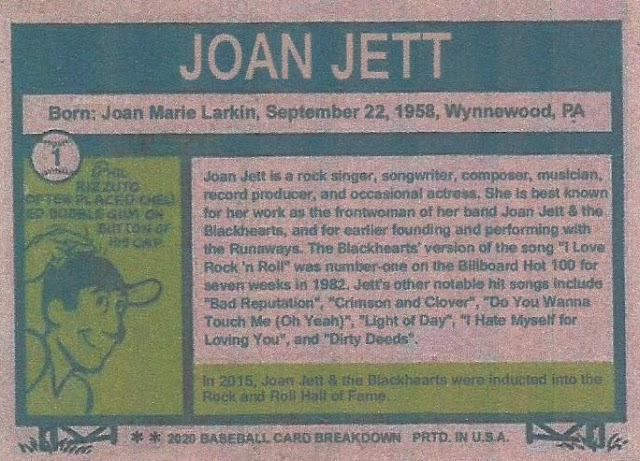 The Phil Rizzuto cartoon that's on the back of Reggie Jackson's 1977 Topps card appears on the back here. I guess that's appropriate. Jackson played for the Orioles around the same time.

After Jett's 1982 hits, she kind of dropped out of view from mainstream radio until "I Hate Myself for Loving You" in the late '80s. But I was always in her camp from the very first notes of "Rock n' Roll," which -- you had to be there -- seemed so wild at the time.

Gavin added a few choice Dodgers to the envelope:

Two of the three were needs. I only had the red Bazooka Nomo prior. The Kevin Brown card is a "platinum blue" parallel. Pacific is so out there, but you're going to be seeing a bunch of Pacific in a future post.

I'm more of a fan of oddballs like Swell than sets like Pacific. Swell is a little more straight-ahead rock n' roll, if we're defining cards by musical genres.

Joan Jett's sound seemed so new in the early '80s but it wasn't at all, it was just simple, down-and-dirty,  rock n' roll music. Good music.

And that's why I jumped at the opportunity to own those Joan Jett customs.

defgav said…
Glad you like, and thanks again for the trade! Yeah, I had a few of those Swell cards as a kid and thought it'd be a fun design to use for customs. The photo was a little too narrow, so I had to fudge it with extra inner blue borders, but I think it works well enough.
August 2, 2020 at 8:27 PM

John Bateman said…
The 1989 Swell design is one of the best of all time. Always loved the Hall of Fame designation. Wish Topps would make a Heritage or archive set off of that design. I don't think the rights would be expensive
August 2, 2020 at 8:42 PM

CinciCuse Bill said…
Am on vacation in the 1000 islands enjoying a swell St Lawrence bourbon, and really like these customs. Very we’ll done. My brother had a rock band signed to Joan’s Blackheart records, and that just amplified my attraction to Joan and her music.
Swell is one of my favorite oddball sets.
August 2, 2020 at 9:47 PM

bryan was here said…
She just released a new version of her hit "Fake Friends" collaborating with L7. It's awesome!

Mark Hoyle said…
Have the Runaways on my playlist. I agree the Swell sets are great oddballs. Went back and grabbed all three years recently
August 3, 2020 at 4:32 AM

Commishbob said…
Joan Jett is behind only Chrissie Hynde on my list of female rockers. Love them both.

I'm with you in that Swell sets are really well done. There's a Billy Pierce in the '89 set and I just ended up buying the whole set because it was cheap and fun.
August 3, 2020 at 1:03 PM

acrackedbat said…
another great Gavin custom! All three Swell issues are favorites in my oddball binder. The designs are fun with perfect player selections, imo. It's a shame we only have three years from them but they were named quite appropriately!
August 3, 2020 at 1:18 PM

GCA said…
Love the Swell sets!
Jett & the Blackhearts played at my college one summer (about '87 or so) There were only about 50-100 people there, so I basically stood front row. Will have to dig out those pictures and post them. Lots of good blogging going on about rock women.
August 3, 2020 at 4:43 PM

Fuji said…
I just restocked my inventory of ice cream sandwiches a few weeks ago. I only eat one or two a weeek, so it'll last me at least until October unless it gets really hot... or work really stresses me out.
August 4, 2020 at 12:41 AM