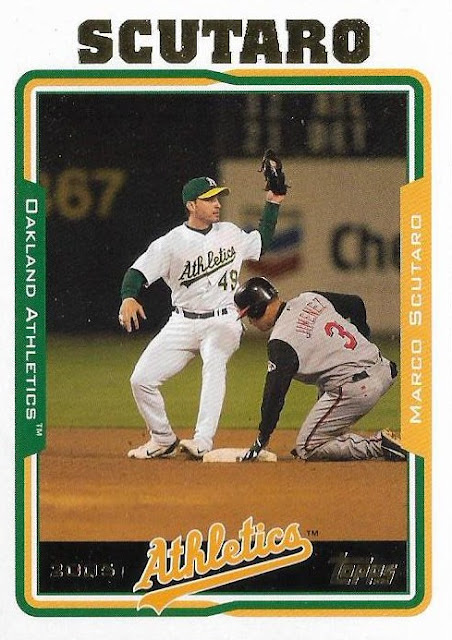 An old high school classmate asked me this week how to go about selling some completed Topps baseball sets that she had purchased for her sons each year while they were growing up.

I already knew this. But seeing it underlined in back-lit numbers stunned me a bit. The 2005 complete set sells for only 40 bucks? I like the 2005 set! I'm trying to complete the 2005 set! Why don't I just throw 40 dollars at it and be done with it?

I stewed about this for a little bit. But I had clearly lost my head. Obviously, there is an iron-clad reason why I don't throw down 40 dollars to very efficiently land the whole thing.

It's the thrill of the chase. Duh.

Long before I could afford to buy complete sets or even knew that I could buy complete sets, I tried to complete them the old-fashioned way, buying packs at the drug store/corner store/grocery store. I did it that way for years. I started collecting in 1975. I didn't buy an entire complete set until 1984 (by the way, that was my first complete set, because completing sets by buying packs on a paper boy's salary is way difficult).

Now that I'm much older and usually have the money to purchase a set all at once, I still refrain from doing it -- with the exception of certain old oddball or not-readily-available sets that would be difficult to complete through piecemeal purchases or trades.

The potential extra money that I need to spend on it, or the longer period of time needed to finish it, is worth it, because the excitement of the chase, the thrill of the hunt, makes the journey so interesting.

And if that isn't enough, completing a set the traditional way instead of buying it helps the individual cards from that set stick in my brain. Going through those few cards I was able to buy with my allowance back in the mid-to-late '70s helped me memorize every aspect of an image and every number of the back. It helped me learn things and truly appreciate the cards. And I find that if I buy the whole thing at once, I don't do that ... and I end up writing a set blog so I can appreciate them, like I did with the '85 Topps set that I bought complete.

I recently received a stash of about 150 cards from the set from Scott of I Need New Hobbies. It's probably enough for me to put up a want list for it now. But I still need to sift through what I have. It's a rather hefty set at 733 cards, as Topps flagship sets were in the earliest part of the 21st century.

I think the reason I sort of like the Topps sets from '03, '04 and '05 are because they're nice and large, they're real sets that actually represent baseball, unlike the stuff Topps flagship was putting out in the late 1990s.

The 2005 set is also the set that came out right before I came back to collecting modern cards. In '05 I had just finished the 1975 Topps set and was working on '74. But '05 flagship? I couldn't have told you where to find those cards. 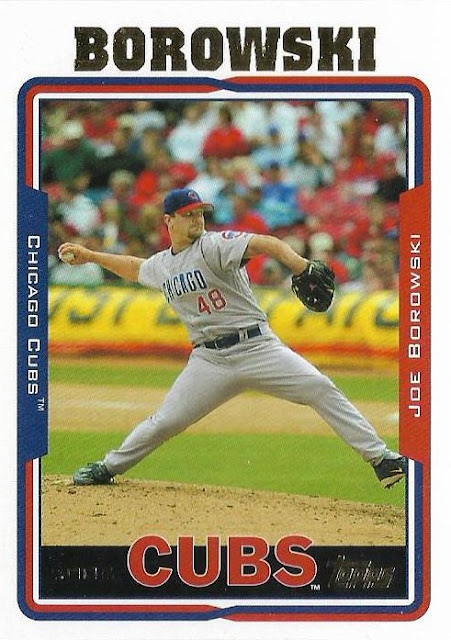 I may seem to be writing out of both sides of my mouth to some, as didn't I just complain about the 2021 Topps design being too busy? Isn't 2005 Topps throwing a lot at us, too?

Yeah, it is. But I like it and it makes sense to me.

I am also amused by how large the border is and how small the images are as a result. I'm sure that has driven the full-bleed crowd crazy for years and that pleases me as well. There is no way this set would be as charming if it was a full-bleed design.

That doesn't mean I don't have questions, like why are the images so tiny in both 2005 and 2004 Topps? A couple of years ago, I did a post on "face percentage," meaning cards in which a featured player's face took up the most space on a card.

But the 2005 Topps set must own the record for the most cards in which a player's face takes up the smallest amount of space on a card. Some of those faces are almost dots on the cards! 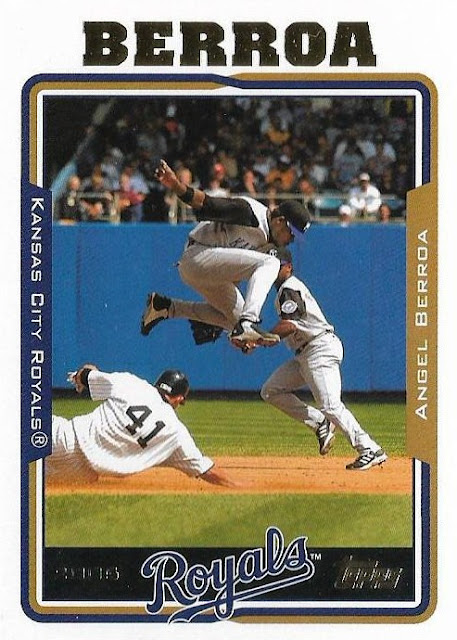 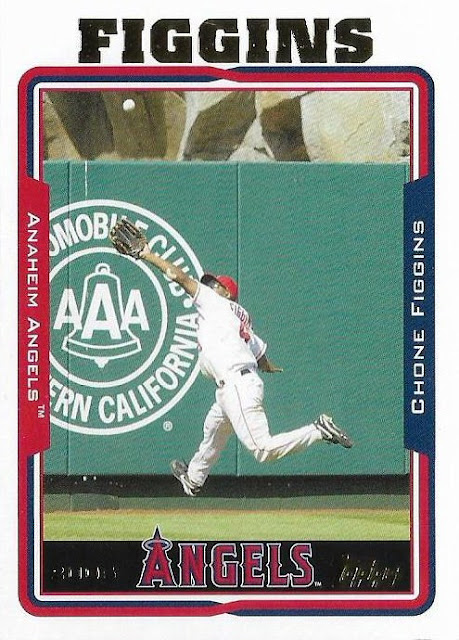 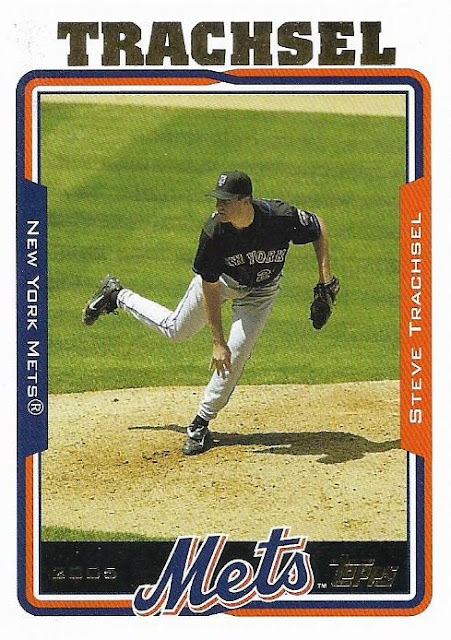 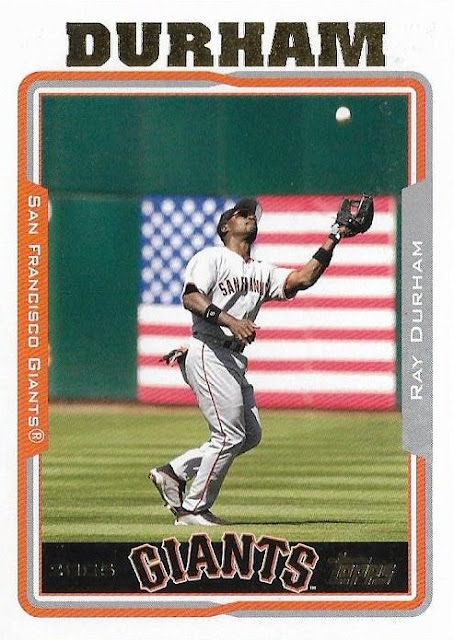 I know Fuji is pleased, the most adamant "get that full body in the frame" collector that I know. 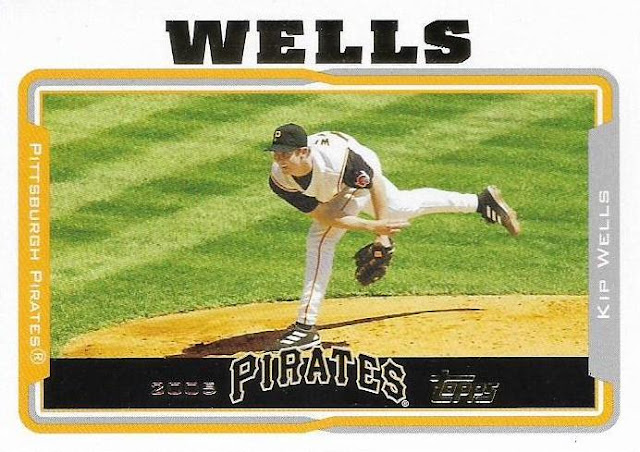 So, as I leisurely collect this set -- and I do mean leisurely, there are so many other card goals that are higher on the priority list -- I will savor the individual aspects of each card and defend it from people who exclaim "why is the player's name and the team's name listed TWICE?"

And I will enjoy that the year the card was issued is right there on the front of the card, which needs to happen more often. 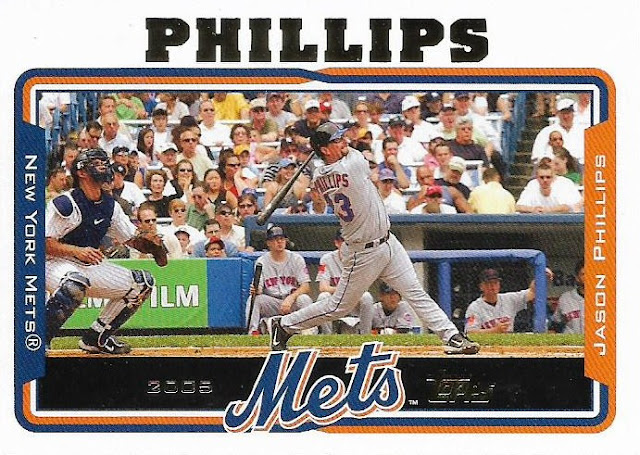 I will read backs and stare at the backgrounds and cherish each card that arrives and each number I cross off the list.

It's the thrill of the chase.

And if more collectors appreciated that, a complete set from 15 years ago would be selling for more than 40 bucks.

Elliptical Man said…
I like the Figgins and the Durham.

Johnnys Trading Spot said…
I basically need two set of flagships. I for the set build and 1 for all of the cards that I have in different collections Team, mini, PC's, Cups, etc. I do the complete set once usually, and piecemeal the rest for my enjoyment.
August 7, 2020 at 10:08 PM

Billy Kingsley said…
I feel the same way...buying a complete set is basically cheating. I try to only get a factory set if it's somehow exclusive. (Different theme color, foil color or exclusive cards, not specific to one retailer I mean) My preferred method of set building is repacks. Unfortunately they seem to have disappeared. I have not finished my all time favorite set yet, because I want to truly complete it..not just go out and buy it. Anybody can throw money at anything, but the sense of accomplishment is lost totally.
August 8, 2020 at 5:41 AM

Nick Vossbrink said…
I kind of do both. Building sets is definitely fun. But I also refuse to spend that much money on stuff—especially new product—because all the extra blow-in bullshit that I don't want makes it that much more expensive. I suppose I could try and get cheap non-hit lots after the bubble is popped but the idea of trying to fill a search list consisting of mostly stars and rookies sounds exhausting.

Also, regarding 2005. I kind of like the early-1970s zooming in the photography. If every set were like this then snore but this looks pretty distinct for the decade. I also don't mind the double names. What I do mind is the Prospect and Draft Pick cards that replace the player name with PROSPECT or DRAFT PICK. As a designer that feels incredibly sloppy.
August 8, 2020 at 8:16 AM

Fuji said…
Heck yeah, I'm pleased. Never really looked at the 2005 set closely. I was out of the hobby when it was released. And I'm one of those people who want the most bang for my buck, so purchasing a complete set on eBay is right up my alley. Just not sure I want to drop $40 for this set... even if those are some well cropped action shots ;D
August 8, 2020 at 10:47 AM

night owl said…
I'll add that I don't think I'd try to complete a modern set through pack-purchasing anymore, at least not anything post-2015. Inserts have gotten too pervasive. We bloggers are lucky we have traders to help us build sets, so it's still possible to finish a modern set by avoiding the "lump-sum payment."
August 8, 2020 at 3:08 PM

Troublewiththecurve.net said…
I am a "set guy" and while I enjoy the chase, I have been known to purchase a complete factory set or even a hand-collated set from time to time. I like that 2005 Jason Phillips. I just completed a "Best of Mets Topps Card" type post and for some reason, when I was putting it together, the Phillips was beat out by Matt Lindstrom that year. Now I'm wondering if I should have used Phillips. Oh well.
August 8, 2020 at 4:30 PM

Steve at 1975BaseballCards.com said…
If I could buy a new complete modern set for less, there's no way I'd chase it and overspend. There are so many vintage sets I can chase instead to get that thrill. Of course, for each person, it's your money, so you get to spend it how you want to.
August 8, 2020 at 9:15 PM

gregory said…
Couldn't agree more. I feel like if I buy a complete set, it's much more likely I'd just store it away and not have nearly as much appreciation for the card design and the players of the era.

Also, being a paperboy isn't easy. Those packs of cards you bought back then were well earned.
August 9, 2020 at 6:39 AM

The Snorting Bull said…
I agree, the chase is always the funnest part of putting a set together. As for the 2005 Topps set, I always have enjoyed the fact that there are a high number of action shots on the cards, but I feel like having the player name and team name on the front of the card twice was redundant and made it overly busy.
August 9, 2020 at 8:06 AM

Nick said…
I'm not a set builder, but what you described is part of the reason I still love buying packs -- it allows me to appreciate the set more. Getting all of them in one big chunk would take away from the enjoyment, I would think.